Who Framed Roger Rabbit, a little gem from the late ’80s, is a great tribute to the noir genre that takes its viewers on a fun ride through the history of cartoons.

A hardboiled private eye. A cartoon rabbit. His cartoon wife. A noir story juxtaposed with a lively world of cartoon characters.

If you haven’t seen Who Framed Roger Rabbit, GO WATCH THIS MOVIE. I’m not joking. I’m being 100% serious. I don’t intend this as a spoiler warning, I mean to say that this movie is such a delight and an amazing piece of art that you should go and enjoy it. This article isn’t going anywhere, so stop reading and go watch it. I’ll wait. 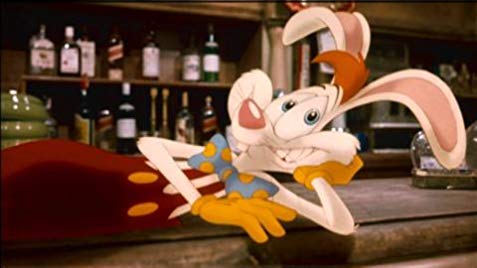 Okay, you watched it? You sure you did? In case you didn’t, here is your second chance to stop reading and watch it.

Who Framed Roger Rabbit is a fascinating piece of art and a trailblazer of sorts in its blending of live-action film and animation. Many people typically cling to Space Jam as this masterpiece of childhood nostalgia, but this movie is my Space Jam. Who Framed Roger Rabbit merged two awesome distinct styles and has everything. Plus, this movie came out in 1988. That’s wild.

The story is compelling and keeps you invested throughout all its twists and turns, which is aided by our two protagonists, Eddie Valiant and Roger Rabbit.

Eddie Valiant is a private detective that used to work with his brother, Teddy, on cases with both humans and Toons (as the cartoon characters are referenced to). This all changed when his brother was killed by a toon, forcing Eddie to go down a spiral and pledge that he will never work with Toons ever again. Roger Rabbit is a cartoon star known for his famous animated shorts, but when we joins the story, it seems like he is starting to lose his edge. If he doesn’t get his act up, he will lose his job and not work in the business again. Valiant and Rabbit cross paths when Rabbit’s boss hires Valiant to take pictures of wife, a suspected distraction of Rabbit. With a fit of rage from Rabbit seeing his wife playing “pattycake” with another man, Roger runs off. The next day, the man is dead and Rabbit is suspect number one. This kicks off the journey of Rabbit trying to prove he was framed, and Valiant reluctantly obliging.

The rest of the movie is a great noir detective story that is highlighted by the colorful world made up of a variety of Toons, both original and famous characters, such as Bugs Bunny, Daffy Duck, Betty Boop, and more.

Private Eye Eddie Valiant is portrayed by the brilliant Bob Hoskins. Hoskins nails the classic noir hero: defensive and reclusive on the surface, layered with pain and genuinely positive emotion. Thanks to his performance, the character of Eddie Valiant has depth, and we can enjoy rooting for this broken man.

Comedian and actor Charles Fleischer turns in a masterful performance as the voice of Roger Rabbit and gives life to this wacky and ridiculous cartoon character. The beauty of a character is it gave Fleischer a vast emotional range to showcase his skills and steal the show. The dynamic between these two is just a joyous thing to watch and never gets old for me.

Christopher Lloyd has a major role as Judge Doom, a very intimidating judge whose mission to capture that suspected murderer Roger Rabbit. Another major character is Jessica Rabbit, a humanoid cartoon married to Roger, is brought to life by actress Kathleen Turner and singer Amy Irving. Jessica Rabbit has made her mark on pop culture as a sex symbol and played an integral part of the narrative.

The writing is beautifully done by Jeffrey Price and Peter S. Seaman, based on the novel “Who Censored Roger Rabbit” by Gary K. Wolf. I would be doing you a disservice by telling you all the specifics so I will try to give you a broad overview. The narrative is littered with mysteries and moments that effectively build tension between the characters and the ultimate goal of solving the case. One of the highlights, which I know I have mentioned multiple times, is the use of the animated characters. They populate the screen with filling in the background or utilizing the spotlight perfectly.

Speaking of the animation, the post-production of this movie took over a year to finish. This was before the CGI and digital animation we enjoy today so making this movie was a challenge for the creative team. Working with the great cinematography of Dean Cundey, the animation team had to work on the actual film of the movie and make sure the characters were where they needed them.

Vice did a great article chronicling the various methods they were forced to come up with for animating the movie, but you can read that here AFTER you have watched the movie, eh. 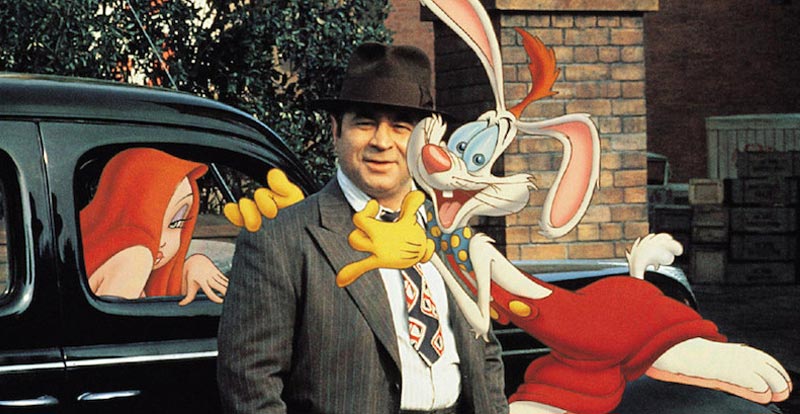 I feel like this is very obvious if you actually read this article. I love Who Framed Roger Rabbit. Since it is made in the 80’s, there was one small Native American joke that made me cringe a bit, but otherwise, the movie holds up very, very well. It’s so strange to see the filmmaking achievements of the animation being incorporated with the beautiful noir story.

P.S. Unfortunately, there is no website for the movie anymore. Siigh.