This episode is About a Commonly Used Formula. 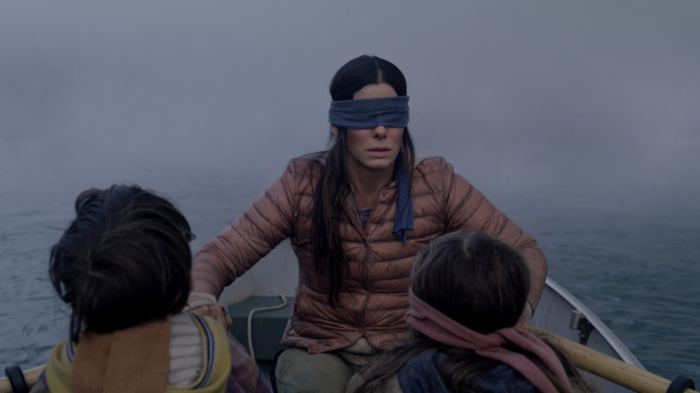 Five years after an ominous unseen presence drives most of society to suicide, a mother and her two children make a desperate bid to reach safety.

This was taken directly from IMDB.

So… were you close?

Trick question. It didn’t entirely matter if you were. Only that you’d written the logline in your voice. Do you see this as a recurring theme in my lessons? Because it should be. It all comes back to lesson 1 a lot of the time in entertainment. The person itself is the product – we all aspire to be influencers in a way.

The critical element about loglines is selling – but mostly, it’s about selling what you see marketable about a movie, in the most succinct way as possible. I can just as easily pitch you Star Wars as a story about space operas of good triumphing over evil, as much as I can, a story about one man’s journey to maximize his toy selling line. To the right executive which sounds more profitable:

Luke Skywalker joins forces with a Jedi Knight, a cocky pilot, a Wookiee and two droids to save the galaxy from the Empire’s world-destroying battle station, while also attempting to rescue Princess Leia from the mysterious Darth Vader.

Alright, in Lucas’ and Star Wars’ defense they had no idea it would be this successful. Still, once they did, you bet they changed the direction of the franchise to profit on that sweet merchandise money.

The right logline is one that sells your script to the right person, AKA which executive can I get to take a chance on me. And yes, for George Lucas, it quickly became all about Toyland. Still, I love those movies, and if it can get your career started, or in Lucas’ case his billion-dollar franchise going, why not?

Simply put, people make or break careers off the logline.

But here’s something most books won’t tell you: it’s really about luck and finding that person that’s interested in your story – selling YOU, the writer, which is reflected upon your work in your SCREENPLAY. So while loglines are important, it’s only as useful as much as the person listening to it hears what they want to hear out of you. Think of loglines as the key and the lock being the executive – if you guys fit together, it unlocks this script’s potential.

I’ll even prove it to you that strict loglines or writing THE PERFECT LOGLINE doesn’t matter. Here are the same loglines from Episode 3, rewritten by other people (links to sources if you click title).

“The youngest son of a Mafia don is reluctantly pulled into the family business when he must avenge an attempt on his father’s life.”

“When a burnt-out loner of a post-apocalyptic wasteland escapes from a tyrannical warlord and his marauding clan, he must work together with a defecting member of the clan and the warlord’s wives to find sanctuary in a chase to the death.”

Now don’t these movies still seem appealing? And while they’re all similarly talking about the same movies… they’re all also slightly different.

For one, both The Godfather and Mad Max loglines change the focus onto separate characters. And Pulp Fiction is so difficult to write a logline about, that most descriptions just lazily sell it as a crazy story anthology – though usually in more elegant terms.

Now, this goes against the grain… as there are a LOT of logline purists out there. But the point is, these still sell the movie, even if it is written differently.

Again, I stress that writing in the style that suits you is more important. Especially for loglines, where you don’t have a lot of room to sell the idea. However, I know how frustrating this is. I’ve wasted literal months in my lifetime on the art of loglines and pitching. I understand how everything can seem like a mess – especially when you want to fit it all on the page… but have one line to sell it. And what I mean by this is, you’ll have a script, a brief write-up, usually your logline and a very brief synopsis (Think about what I did in Episode 3 and my description of The Ghost In The Machine).

That’s it. Which is very stressful.

Which is also why I’m not going to show you the formula to writing loglines. Right now.

Yes, there’s a stupid formula. Yes, I could’ve cut to the chase a lesson ago. No, I wasn’t going to do that because people say Hollywood is cookie cutter enough and I wanted you to figure out how you like to write first, before giving you the easy answer.

How To Write a Logline

If you want to know more read SAVE THE CAT STRIKES BACK. Here’s the basic formula.

A (flawed Hero with a problem to overcome by journey’s end) is/has/encounters a (catalyst: something that changes their world pulling them into act two), but when (Midpoint: Something representing the middle of your movie stated here), they must (Theme) before (Death: Aka Worst Case Scenario) and stop (Antagonist).

To most of you, this either sounds stupid or amazing. Maybe a little both, but that’s Hollywood. Let me explain better and then show you how this fits EXACTLY into every logline.

The order doesn’t necessarily matter, so long as you hit all the right beats. Seems a lot, right? It’s not. I’ll show you:

THE GHOST IN THE MACHINE

My hero is the machine’s creator. The investigation ruining his playboy lifestyle (He’s basically Tony Stark) is the catalyst. I know my midpoint and death are combined, that’s because that suicide is investigated in so many ways, that it becomes my later midpoint (b/c missed clues you catch later in movie bring us back to this moment many times) but is also the death scenario we want to avoid: Other people going kaput due to the program. The program itself is the antagonist killing people – or so we believe… to be honest, it’s a very trippy movie meant to mess with point of view.

I didn’t list my theme because it’s a psychological thriller and the theme is sort of the payoff at the end.

You can say it’s a flawed logline. That I can probably sell it better, but to be honest – I didn’t want to give my characters away (it’s a psychological thriller so there are twists) – because that’s my bread and butter. Again, sell your style. The formula isn’t perfect.

“The aging patriarch (Hero) of an organized crime dynasty (Midpoint) transfers control (Catalyst) of his clandestine empire to his reluctant (Death) son (Antagonist).”

Hero in this case is Don Vito. Showing the crime family dynasty is the midpoint and features the best/most memorable moments of the family business. The catalyst change in the status quo: Vito transferring business over to Michael. Death is the undoing of who Michael was before. The antagonist is Michael embracing becoming the villain, becoming everything he needs to be in order to be The Godfather.

No theme. And let’s be honest, The Godfather has so many themes it’s hard to pitch just one. Now, I know what you’re thinking… B.S.

Well, here’s me doing it for the adapted logline too.

“The youngest son (Hero) of a Mafia don (Antagonist) is reluctantly pulled into the family business (Midpoint) when he must avenge (Death) an attempt on his father’s life (Catalyst).”

Hero is Michael. Antagonist is Don Vito, as he represents the old way that we need to undo to survive. Midpoint is still showcasing the family. Death is the avenging as it leads to the inevitable atrocities our hero commits. The attempt on father’s life is the Catalyst that forces Vito to transfer business over/have Michael go on his journey.

See, it works even if you change the perspective of the hero. Again, no theme for the same reason.

“In a post-apocalyptic wasteland (Midpoint), a woman (Hero) rebels against a tyrannical (Death) ruler (Antagonist) in search for her homeland (Theme) with the aid of a group of female prisoners, a psychotic worshiper, and a drifter named Max (Catalyst).”

Hero is Furiosa. The midpoint is the post-apocalypse and how crazy things can get (Think crazy car chases and fight scenes). The death is tyranny. Antagonist is Immortan Joe. The theme is finding a place to call home. The catalyst is Max himself – who very much gets our story going, reluctantly getting himself involved in Furiosa’s conflict.

If you’ve seen this… you know that this one is a perfect fit.

“The Avengers (Hero) and their allies must be willing to sacrifice all (Theme) in an attempt to defeat the powerful Thanos (Antagonist) before his blitz of devastation and ruin (Catalyst, Midpoint) puts an end to the universe (Death).”

Heroes are the Avengers. Theme is the willingness to sacrifice everything for the greater good.  The Antagonist is Thanos. The Catalyst and Midpoint is stopping the devastation and ruin, as it keeps escalating from the beginning up until the end of the movie. And Death is the end of the universe.

I’ll admit, the midpoint here is a bit weak here. Mostly, because you know exactly what the midpoint of a superhero sequel is as it’s sold in the premise (In this case, the infinity war and just beating Thanos as they constantly keep losing infinity stones).

“The lives of two mob hit men, a boxer, a gangster’s wife, and a pair of diner bandits intertwine in four tales of violence and redemption.”

Nope. Not going to pretend like I know what I’m talking about for this one. Though it’s funny to see how many others try because honestly, there are just some movies that break structure – this is very much one of them.

Next week, we’ll go over describing/short summarizing your movie based on your logline. I’ll also talk briefly about pitching. Mostly, the notion that in Hollywood, everything is a THING meets A DIFFERENT YET ULTIMATE RELATED THING.