‘Mockingjay Part 2’ Review: Why Do We Fight?

I already mentioned this in my review of Mockingjay Part 1, but the split finale of the Hunger Games franchise is going to be one to divide fans. If you enjoyed Mockingjay as a book, I suspect you’ll like the finale; if you’re crazy and didn’t like the third book, well, you may be disappointed, as the film sticks to the book pretty closely.

Mockingjay Part 2 follows Katniss and her band of District 13 rebels as they make their way into the Capitol to force President Snow’s surrender, one way or another. The film doesn’t hit every note well, and it’s so convoluted it doesn’t quite know what it wants to be a lot of the time, but the moments it does hit, it hits hard.

Part 2 picks up exactly where Part 1 left off–immediately opening with a shot of Katniss’s bruised neck. It was such a sharp opening that I was taken aback by it, jarred into the movie when I expected some kind of “previously on Mockingjay” segment. I didn’t really expect a CW-esque summary of what we’ve all forgotten happened a year ago and I would have hated it, but I did anticipate some sort of voice-over while the opening credits rolled, replaying the moments before Katniss was attacked by Peeta. But maybe that’s what director Francis Lawrence wanted, a slap to the face introduction.

Katniss handles the physical injury well enough, something she’s always done with ease, but it’s the memory of that thing-who-isn’t-Peeta that haunts her. It’s a fear she carries with her for much of the film and I have to say, I appreciated the emphasis on her journey to trusting Peeta again, and vice versa. I am one of the few people who enjoyed the meandering moments of Part 1, using the down time to show us the effects of Katniss’s PTSD and I’ll concede that I hoped the second film would take a bit more time to show that effect on Peeta. While he wasn’t cast aside completely, he wasn’t given the screen time I thought he deserved. That being said, Josh Hutcherson as Peeta made excellent use of that little time, proving yet again that he was perfectly cast as the boy with the bread.

And for as good as Peeta is throughout the film, Gale is inversely bad. I don’t blame Baby Hemsworth for all of Gale’s flaws, as there are some truly baffling lines that can only be attributed to the poor writing of the character. Gale is a soldier, through and through. He has lived his life with one purpose: protect those he loves. And when he can’t do that, he throws himself further into the role of protector, each failure leading him to become more jaded about the world around him. His life is the mission: protect my family by taking down the Capitol. A mission he will do anything to see through to fruition. And that key aspect of Gale’s character is lost in the films. He comes across as whiny and selfish instead of stubborn and intent on his goal. It’s a shame because that destruction of his character really ruins his integral moments. 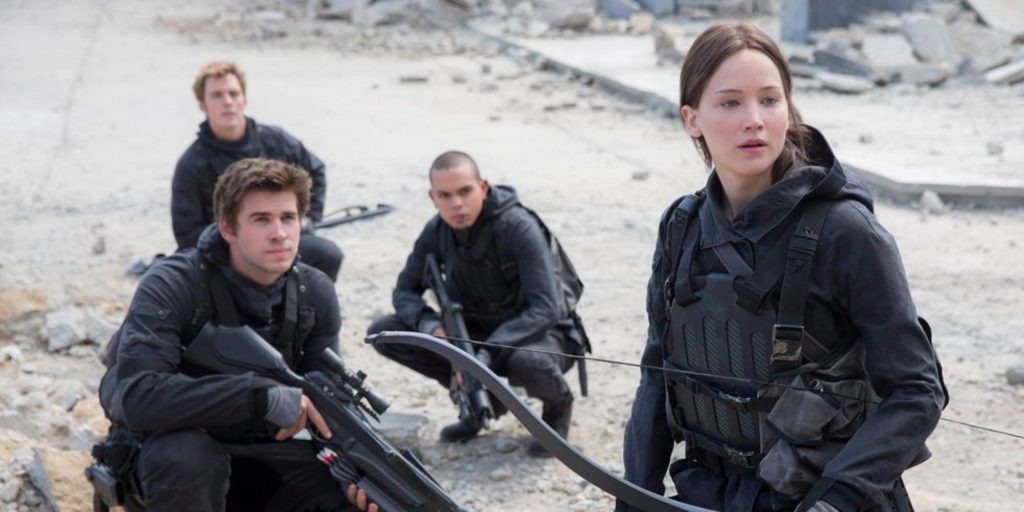 Like its book counterpart, Mockingjay depicts war, death, and grief in a more realistic manner than most films and that’s something fans can appreciate. Politics and corruption have a larger impact in the final installment when compared to its predecessors, and it’s so much more than just “Kill Snow”, but at the end of the day, it’s the action that takes the lead. There aren’t too many moments to sit and ponder the implications of Katniss’s actions because it’s all fast-paced right from the get-go. It’s another reminder that Part 1 and Part 2 really are completely different films.

I complained after first seeing The Hunger Games that the lack of music was striking for me and one of the reasons I didn’t resonate as much with the film. It seems Part 2 took that notion to heart and stuffed the final segment full of loud, action-packed music and it was grating, taking away from the really good moments of music–the quiet uses of “Rue’s Farewell” throughout.

There was some questionable camera work in the film that I wouldn’t usually draw attention to but because I’m still firmly in the camp of “this didn’t need to be two movies,” I’m going to. Long, meandering shots of alleys and corridors, crazy spinning shots of characters that I’m guessing were meant to be artistic and emotional only served in making me nauseous. Cut the fat and give me a three hour film, instead.

I could understand the need for a Part 2 if it enhanced the characters in the same way it did in Part 1, giving us the little moments with characters like Finnick and Joanna who rightly deserve more screen time. Unfortunately, those little moments were either nonexistent or fell flat. Why even cast someone like Brienne of Tarth if she’s only going to be used for a minute of screen time? And don’t even get me started on the underwhelming use of Effie and Haymitch.

We as viewers need those smaller moments to form bonds with characters so that when they leave us in grand fashion, we feel that loss more deeply. Rue’s death was difficult because Katniss had that time to love and then mourn. And I fully understand that Mockingjay is much more focused on the grim aspects of war and how death isn’t glorious and I respect that, but give me my moments beforehand, and not some half-assed foreboding scene where we know the character is about to die because you just focused in on them for the first time in an hour. 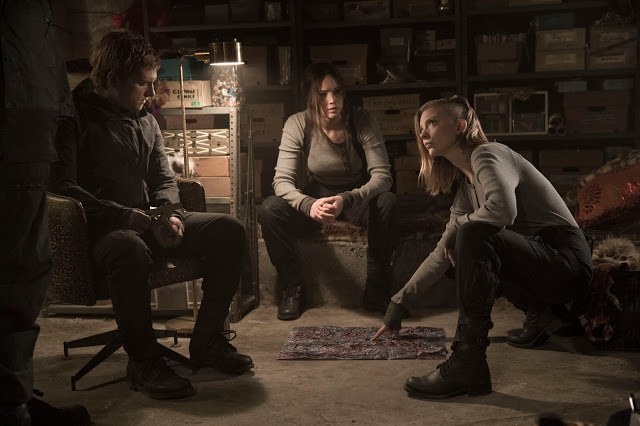 If there’s one compelling reason to see the film it’s Jennifer Lawrence as Katniss Everdeen. Say what you will about everything else in the movie and I’ll agree with you but the only reason Part 2 stands as strong as it does is because of how fully Lawrence embodies Katniss, how deeply she connects to the character. Every look, movement, and bit of dialogue is the Mockingjay brought to life. Katniss isn’t the best leader. She doesn’t consider the many consequences of her actions–ever–but she has her convictions, her notion of right and wrong and those principles are what guides her to the end.

The final half hour of Mockingjay Part 2 is hard to watch. Especially in light of current events, the madness of war and the chess game leaders was particularly difficult to watch play out on screen. Orphaned children, widowed spouses, childless parents, it’s all there and it’s all horrifying. And then there was the ending. (Not the epilogue, that was awful like in the books.) In most action sagas, the story is resolved moments after the climax. The final fight concludes, the victors celebrate, and credits roll. That isn’t the case with Mockingjay and I’m so grateful we were treated to a proper resolution as well certain characters’ emotional states at the end.

Is Mockingjay Part 2 perfect? No. But it does have perfect moments and in the end, that’s all I really wanted.