This week on Marvel’s Runaways…. THE TEENS FINALLY BECOME RUNAWAYS! Also, if you haven’t heard the good news yet, Runaways has been picked up for a second season but before we get ahead of ourselves, let’s discuss the season finale of Marvel’s Runaways: “Hostile.”

The episode begins as the teens stand face-to-face with their evil parents.

These teens are ready to rumble! Unfortunately, so are Pride and they are able to thwart off their children’s initial attacks. The parents are then granted reinforcements as Jonah emerges from the shadows and starts blasting glowing beams of light at the kids.

After seeing Jonah glow light, Karolina realizes that she and Jonah are connected, although she is not 100% sure how. She does know that she is the teen’s only chance of holding him off so she tells the others to run. While Nico initially protests against Karolina’s demands, she succumbs to Karolina’s warm and soft smile and obeys her gf’s wishes. 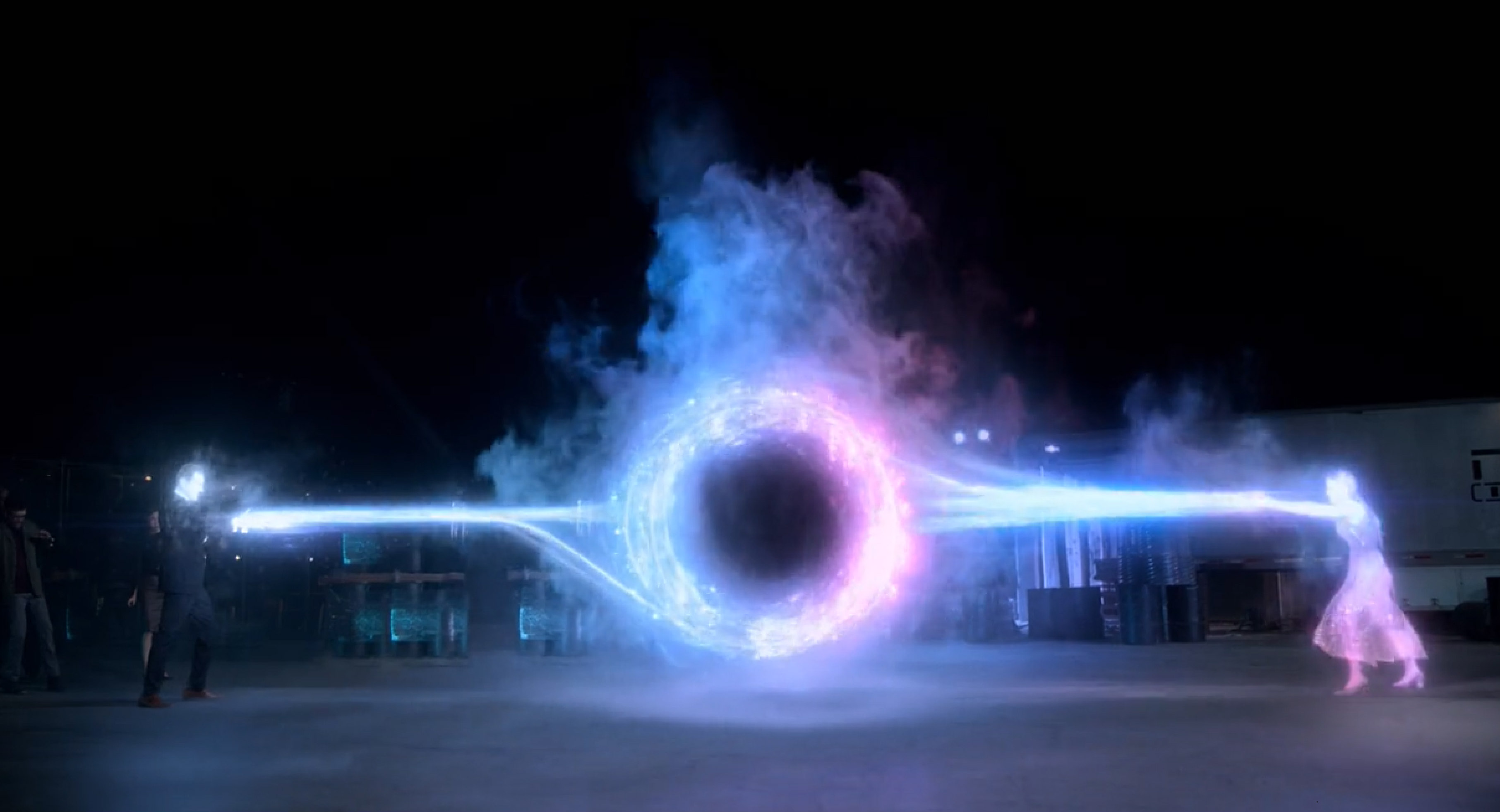 What happens next is very confusing. Jonah starts glowing white, Karolina takes off her bracelet and starts glowing Rainbow (I will never stop loving how gay it is that Karolina glows rainbow), and they shoot light beams at each other a la a Harry Potter/Voldermort showdown. Jonah, being full-light-god, is able to overpower Karolina and win the fight. He then takes her back to the “Private” room at the Church of Gibborim and lays her down on what is presumably the bed she was conceived on to nurse her back to health with that weird-ass blue mask.

The other teens run off when Karolina instructs them to and while Nico wants to save her boo, the group decides that they need to get to safety, regroup, and make a plan. This leads to one of my favorite images EVER from this show (and that is saying a lot since Runaways has had a Chuppa sex scene and lady kisses) as they make their way up to the hills of LA to take cover. 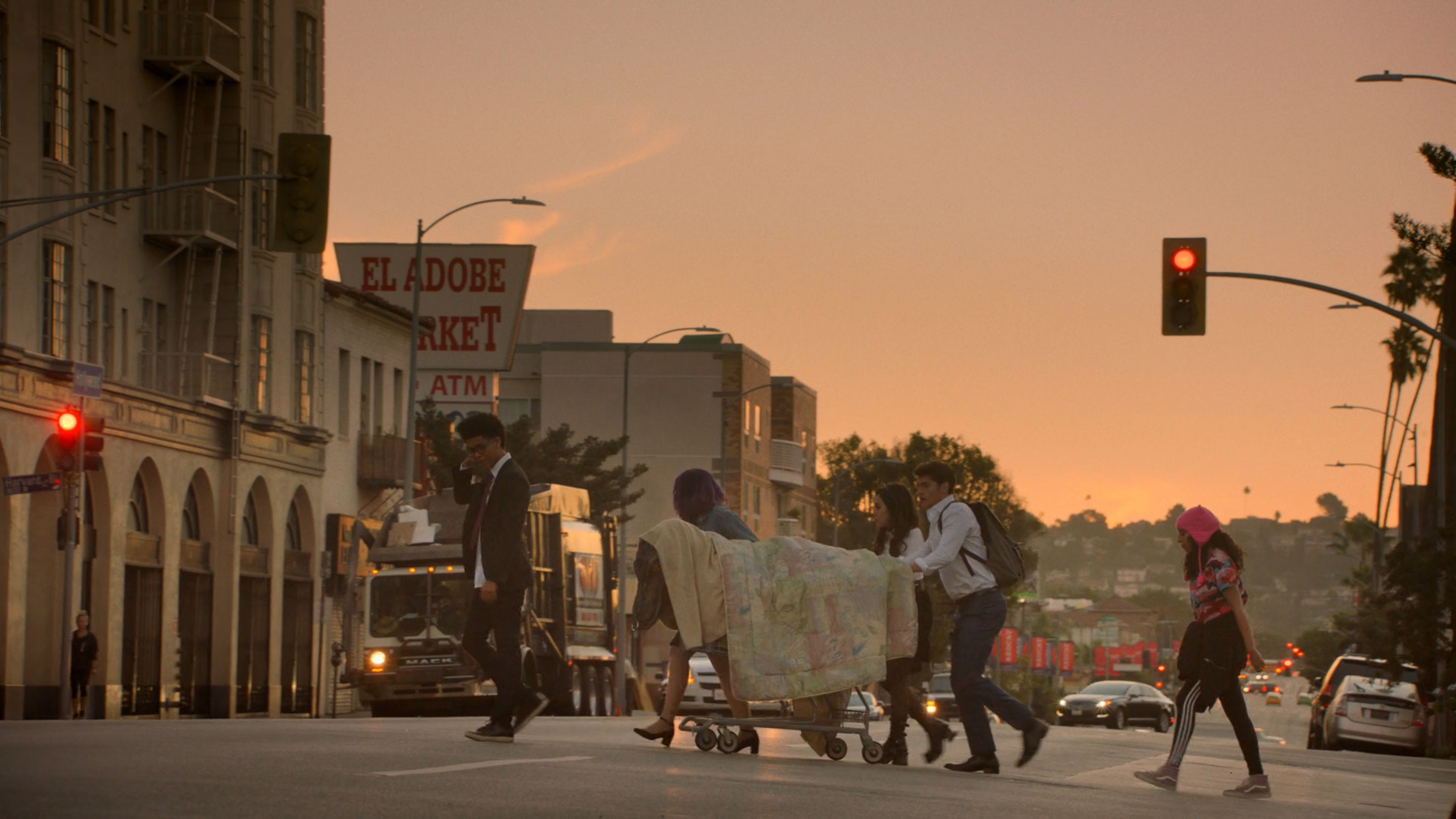 Nico and Alex have different ideas on what their next move should be. Alex wants to peace the fuck out of LA and Nico is appalled that Alex would leave Karolina behind, especially since she risked her life to save them. Some of the others are tepid and unsure of what the best decision is.

Chase: “If it was me in her place, I would want everyone to go.”
Nico: “Well if it was you in her place we would. But it’s not.”

This is only one example of the AMAZING writing that is going on in this episode. The one-liners and comebacks were on point this week!

It doesn’t take much for Nico to convince the team that Karolina is worth saving, and in the end Alex reluctantly agrees to a Karolina rescue mission. Unfortunately for Gert, the team has decided that she has to dump Old Lace which leads to an emotional goodbye (more on this later).

The first stop on “Mission: Rescue Karolina” is the local thrift shop so that the teens can buy disguises to hide their true identities. Nico and Chase take this time to discuss their respective romantic trysts from the night before. Guys, I know I have said this so many times before, but I will say it yet again: I LOVE THIS VERSION OF CHASE! I mean if we ignore the fact that he starts the following conversation by joking that the only reason Karolina wasn’t into him was because she was gay… the fact that it ends like this is amazing: 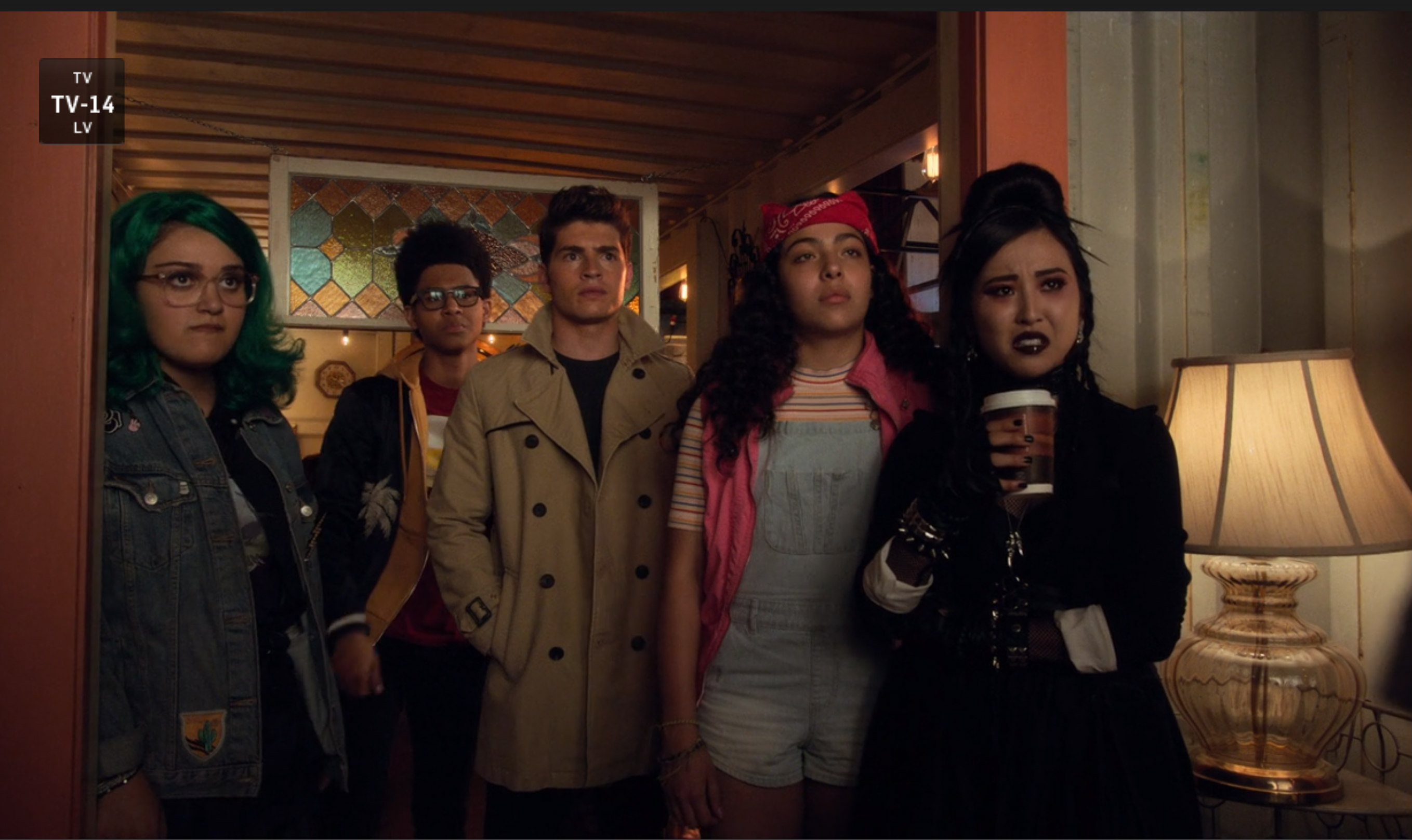 The teen’s first attempt to learn Karolina’s whereabouts was so ridiculous I am having a hard time keeping a straight face as I write about it. Their plan is to steal the coffee of Leslie’s Gibborim lackey at the CAFE THAT STILL ONLY HAS ONE BATHROOM and then try to convince him to spill the beans regarding Karolina’s whereabouts. It is moments like this that make me remember that we are dealing with teenagers here. When that brilliant idea ends up failing, they opt for Plan B: pretend to be wayward runaways so The Church of Gibborim can shepherd them into their herd.

This plan does the trick (with Leslie pulling some strings in the background to make it happen) and Molly and Chase are able to break Karolina out and lead her back to the hideaway, where she is reunited with Nico. 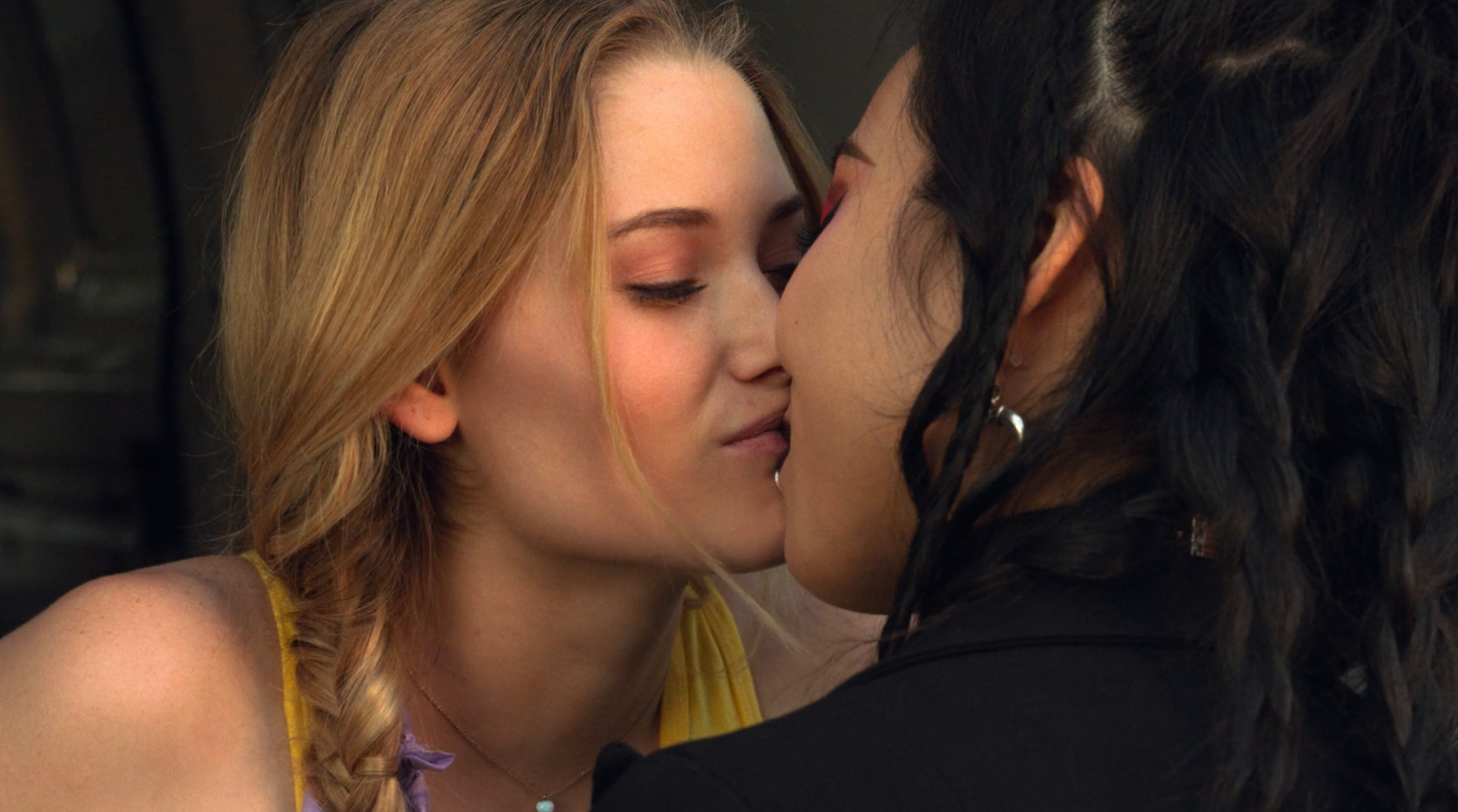 I have been cautious about getting too emotionally invested in a Nico/Karolina pairing because I was worried that the feelings were too one-sided and I didn’t want my heart broken. Thankfully this episode mitigated my fears. Nico leaves a conversation with Alex to find Karolina in the back of the van changing her top. She takes a moment to admire the girl who she is developing feelings for before prompting Karolina to turn around with this:

Nico: What you did for us, was… was epic.
Karolina: Yeah, well. What you guys did for me was pretty epic too. You should have run.
Nico: Some of us wanted to.
Karolina: Not you.
Nico: Nope, not me.

Then she walks up to Karolina and kisses her. With that kiss, and Nico’s look, I let my barrier for this ship down and guys, I am all in. ALL IN!

Want to know what can make this even better? The next morning Gert and Chase wake up holding hands and Nico/Karolina wake up spooning!

With their kids on the run Pride gathers together to discuss their next move (obviously leaving out Leslie because she literally was in bed with Jonah). After Tina reveals to the group that Leslie was the one who killed the Hernandez’s, they decide to find out what really is down in that hole while also figuring out a way to get their kids back.

Dale and Stacey gather all of the Hernandez’s old geological seismic sonar equipment to finally discover what’s down the hatch… I mean hole. They are surprised and amazed to learn that the hole does not contain the clean renewable energy source that they originally thought, instead of in the depths of the hole lurks an unknown living life form. I know I harped on this last week, but I will never get over the fact that Pride’s “Master Evil Plan” was drilling for A CLEAN RENEWABLE ENERGY SOURCE. What I hate so much about this is that in their mind they can rationalize the sacrifices because it was for the greater good. They were saving the planet and while it was unfortunate that they had to kill teens, in theory, the discovery of the renewable energy source would save even more. I am not saying that this is an argument I believe, but that fact that it can be made, and that they can worm their way out of being monsters is maddening.

Anywho, moving on, Leslie calls another Pride meeting, but the Wilder’s do not show. At this meeting, Leslie admits that she was wrong to blindly trust Jonah and asks for their forgiveness over killing the Hernandez’s. She promptly follows this with admitting to killing Amy. Or at least knowing who killed Amy at the exact time it happened and never saying anything. Remember that warning text Amy got as she was about to run away? That was from Leslie. Remember that man who walked into Amy’s room as she was about to run away and looked like Jonah from behind? That was Jonah. See, when Amy hacked into the Wizard server an alarm was sent not only to Tina, but also to Jonah. Jonah didn’t want to risk the chance that Amy saw the footage of the sacrifices, so he killed her. Suffice to say, Tina and Robert do not take this news very well, and Leslie “attempting” to warn their daughter provides them very little comfort.

At the moment though, Tina and Robert have to work with Leslie in order to obtain their common goal: destroying Jonah.

While the reveal of Amy’s cause of death was very emotional, and I felt for the Minoru’s, the entire Amy storyline fell flat. This was a huge focus of the first 4 episodes or so and then midway through the season the plot seemed to have dropped off the face of the earth only to randomly reappear again two weeks ago. The reveal of Jonah killing Amy essentially has no impact on the teens and will only create strife among Pride, which seems like a missed opportunity.

The Runaways Run Away

With all six of the teens out of the clutches of their parents, and Alex packing heat and a wad of cash courtesy of Darius, they head to the bus depot to get the hell out of LA. While contemplating where to run off to they see their faces on the TV. Their parents have framed them for the murder of Destiny (remember Destiny!) and the kidnapping of young impressionable Molly Hernandez. With that, the teens are wanted fugitives, and can officially be called Runaways.

So that’s a wrap for Season 1! While I had some issues with this first season, I have to say I am pumped for season 2! My favorite part of the comics is how the teens take care of each other while out on their own and hopefully, that will be a major theme throughout the second season! See ya’ll next season!

@theworkprint
Follow
Previous articleThe ‘Animaniacs’ Are Being Revived at Hulu
Next article‘The Magicians’ Review: Season 3 Returns with a Noble Quest