Spoilers through Agents of SHIELD Season 4, Episode 1: “The Ghost.”

Marvel’s Agents of SHIELD is back and bringing the heat! The Spirit of Vengeance himself, Ghost Rider, has been the spotlight of all the marketing material for season four and the premiere episode doesn’t disappoint. Even though Ghost Rider is the new, headline character, there is a lot of groundwork laid for the coming season. 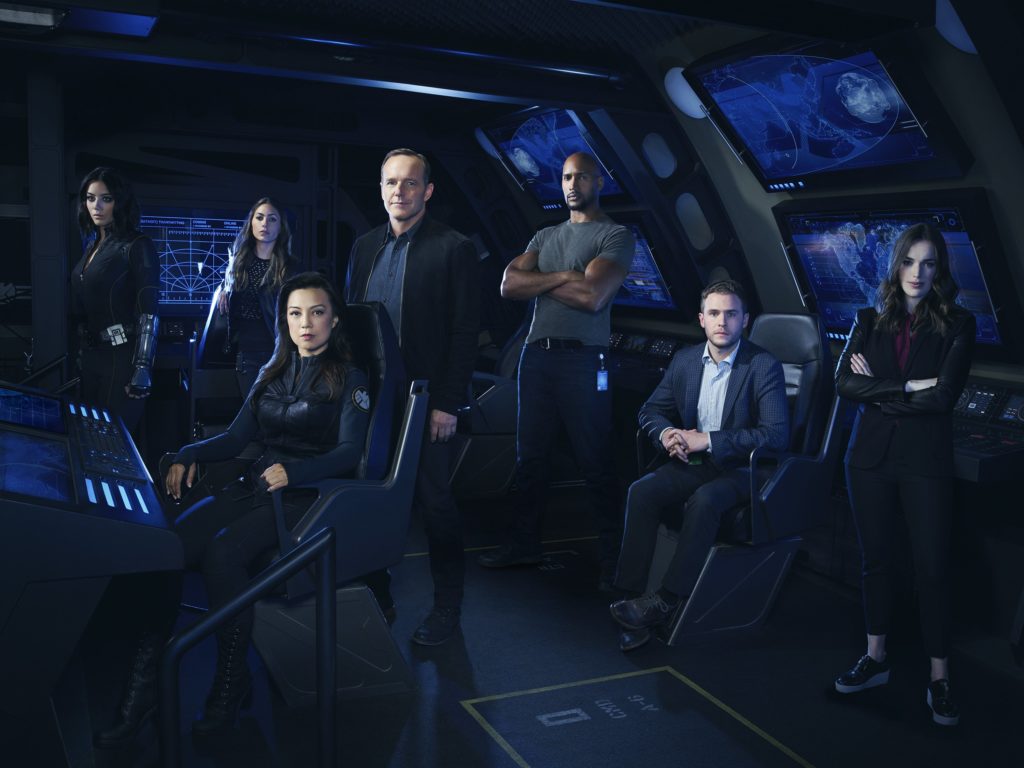 When we left the SHIELD at the end of season three, Hive was defeated, Daisy was on the run, and Coulson was no longer Director of SHIELD. It was clear that by season four, SHIELD, much like the Marvel Cinematic Universe, has cast the Inhumans aside. In the premiere I believe the word “Inhuman” was used once.

The advantage of a show like SHIELD hitting a fourth season is that the core characters now have a firm foundation. This allows the writers to break them up a bit and put them in situations that challenge them in new ways. The season four premiere, The Ghost, finds our team in a new predicament, broken up and segregated. 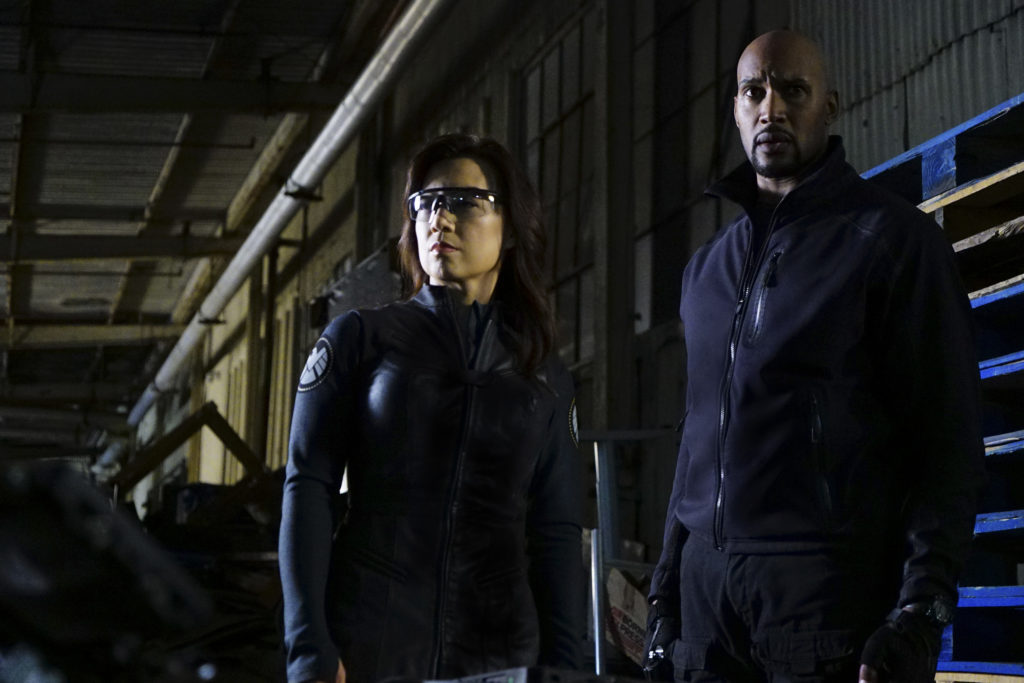 May appears to be stationed at the bunker training a tactical squad. This squad is later seen in battle, which make it clear how great May is as a field leader. She appears to be at home and satisfied with the arrangement. After losing Andrew last season, SHIELD is really all that she has left.

Fitz and Simmons are a couple but struggle with Simmons’ new position as a close advisor to “The Director”. Simmons’ new role puts her at odds with May and pulls her away from Fitz. Frustrated, Fritz goes to watch football with Dr. Holden Radcliffe. When Fitz arrives he is greeted by Aida, an android assistant that Radcliffe has created. Aida appears to have caught Fitz’s attention and with the struggle he is having with Simmons, this might create some friction between these two beloved characters.

The Search for Quake

Mac and Coulson team with Yo-Yo to find Daisy in Los Angeles. They uncover clues about a weapon being sold to the Chinese and investigate. They find the Chinese buyers and watch as they open the mysterious box. Once the box is open, a smoke substance rushes out. The main Chinese guy seems to be the only one affected. A female figure appears behind him and says, “Breath of Fresh Air.” He begins to see the others around him with blacked out eyes and weird faces and starts shooting them all. May and her team show up and clear out the remaining bad guys. She then *feels* the female figure walk behind her. When the show ends, while May is talking to Coulson, his eyes go black like the Chinese bad guys did. This tells us that May has been influenced by this female in some capacity.

As for the identity of the female figure, we don’t have much to go one. The best assumption we can make is that the big-bad for this season might be a Ghost Rider villain. Since Ghost Rider taps into the spiritual/mystical part of the Marvel Universe it would make sense that the ghost-like female figure has ties to the Spirit of Vengeance. Just shooting from the hip, I believe this might be the MCU’s version of Hag. 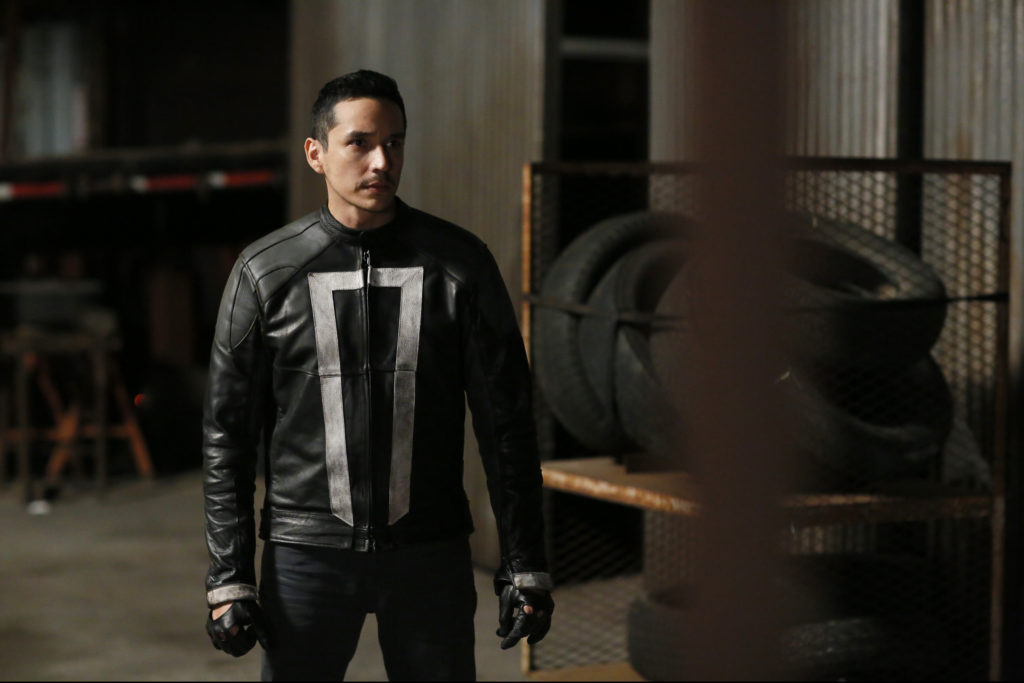 The Spirit of Vengeance

Finally, the main event: Ghost Rider. Season 4 of Agents of SHIELD does not bury the lead. The opening scene of the show has an amazing Ghost Rider car transformation scene. There are also a few shots of Ghost Rider through the first two-thirds of the show. When Daisy finally tracks him down, we finally get a good look and feel for what Gabriel Luna is bringing to the role. There is a great one-on-one fight between Skye and Ghost Rider and it ends with a well done transformation scene where Robbie fully becomes Ghost Rider while Daisy watches. The design on Ghost Rider is spot on and the effects look great. This scene might have been my favorite from the series so far.

Just like any good premiere, a few questions are answered, but we’re left with many questions. Just what is Daisy’s mission now? How did Robbie become Ghost Rider? What was inside the box and how is it going to affect May? And most important, who is the new Director of SHIELD? The Agents of SHIELD premiere was an okay time, but the addition of Ghost Rider helps make it a better viewing experience. If you are a fan of the series, there is a lot to like about the season four premiere. Some good action, a few jokes, and more Marvel characters then you can shake as stick at. Agents of SHIELD has set the foundation for where season four is headed and it looks like it might be a hell of a ride!