As the episode opens, we find Mike and Josh trekking across a frozen wasteland to reach the last available woman on the face of the Earth. Sure, being single can be a bit rough sometimes, so I can see the unforgiving cold of the arctic as an apt comparison. As we arrive in the hut of the last available woman on the planet, Mike serves as the translator to the budding relationship between Josh and the wild-woman, who thinks of Josh as a god, but I mean, if you’re desperate, you’re desperate right? Things are good, small talk goes well (ugh, the dreaded, ‘do you like music?’ question) and of course, then we get the dicey part of the exchange. It’s that moment when you take whatever chemistry that you have and gamble that it’s enough for it to turn into a first date. This of course, leads Mike to translate that she “likes where she’s at” and again, Josh is cast out into the bitter freezing wilderness that is singledom. As far as surreal situations go, this was pretty weak, and failed to live up to the increasing quality of the episodes in previous weeks.

Of course, this leads us back to Mike and Josh playing videogames, when out of the blue Maggie calls and wants to “get together”. Getting together can mean so many different things, but when an ex calls, especially when you were the one getting dumped, the cacophony of thoughts running through your mind is overwhelming. If anyone has ever been dumped before, I think everyone has had the fantasy of your ex groveling and coming back to you saying that she made a huge mistake. The close second of course is the aforementioned ex wanting to get back together. Of course, this is a very logical conclusion with Maggie calling out of the blue and wanting to “get together”. Mike of course, the adult ADD sufferer that he is, absent-mindedly reassures Josh as he focuses on the latest Madden (or Call of Duty, whatever bros play).

Josh dives head first into the fantasy that he’s concocted in his own head and goes out to a nice lunch with Maggie, only to literally (fantastically?) get his heart ripped out when she tells him that she’s getting married to Graham, who we last met at the wedding in hell. At this point, Josh is devastated, but he keeps trying to keep a stoic front as to keep Maggie from knowing how badly he’s hurt. I think we’ve all been in this situation before, but one of the best things about Man Seeking Woman is its depiction of what we go through internally brought to reality. The gory and disgusting spectacle of seeing Josh bleed out while trying to make small talk to try to save face was incredibly uncomfortable. Of course, none of us can really hold our poker faces that well, and we’re all saved from the discomfort as the EMTs come to cart Josh away.

While trying to figure out what exactly went wrong, Josh and Mike end up at a convenience store. Mike, being the horndog that he is, spots pills that give you sexual madness, but at the cost of liver failure. At the same time, Josh figures out exactly what went wrong between him and Maggie (gifts are a relationship minefield) and somehow, the store also sells time travel pills, but at the cost of ruining the space-time continuum. So, Mike and Josh, now armed with their choice of pharmaceuticals (at a very cheap $2.50 for three pills) make their adjustments. Josh succeeds in changing the past, and in turn, sees himself with Maggie and makes up for lost time. He then uses the next two pills to make himself richer, and have distinctive facial hair. Of course, he doesn’t pay attention to the side effects and he ends up having the Earth getting enslaved by an alien overlord named Trackanon. You know, typical space-time continuum stuff. 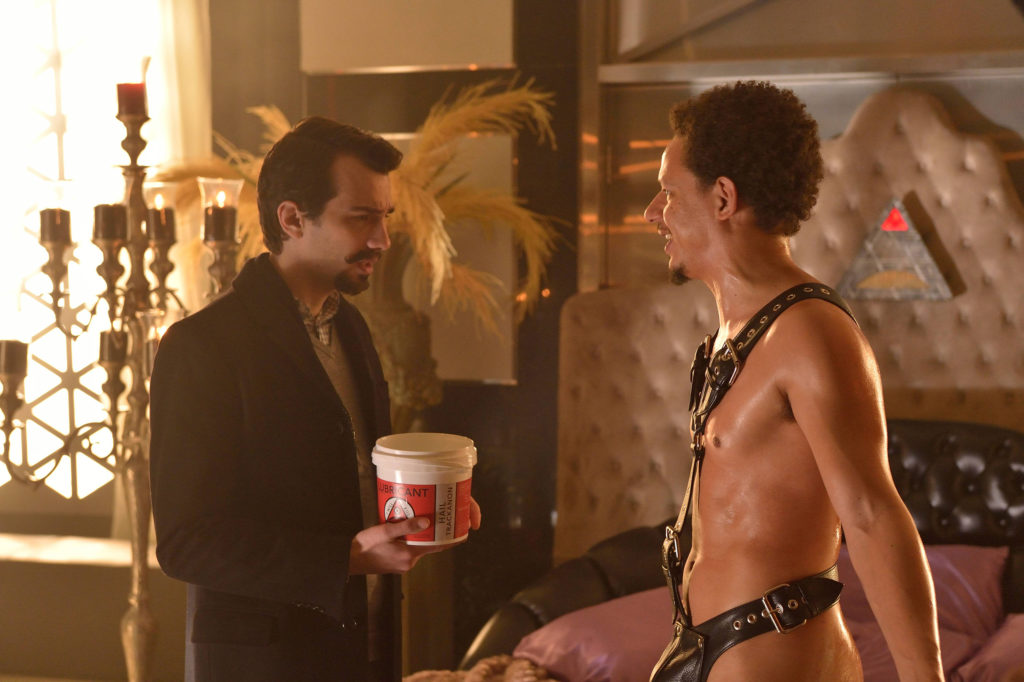 It’s in this oppressed post-apocalyptic world where Josh finally starts to realize somethings about himself. He loved Maggie, that’s true, but in a way, he lost himself when he was in that relationship. Looking at himself in this alternate future, he realized that the Josh in ‘Josh and Maggie’ isn’t the Josh that he really is. This is of course is intercut with Mike as Trackanon’s sex slave (featuring Eric Andre in a way too revealing outfit and sickening amounts of lube) and Liz as a Sarah Connor-esque freedom fighter trying to overthrow Trackanon. Finally gathering up the courage to split from Maggie, Josh finds out that Trackanon is a strict Catholic (who knew alien overlords are one step below a pope?) and that divorce is outlawed. Josh, finally over Maggie, decides to disguise himself as a sex slave (featuring Jay Baruchel in a way too revealing outfit) and slay Trackanon with his own scepter in order to get divorced, you know rather than living out his life in a loveless marriage. Who said Josh doesn’t take his lovelife seriously?

And that’s how the season ends, with Trackanon dead, and Josh and his crew finally moving on. This whole season really, has been about Josh and Maggie. While the protagonist of the series has always been Josh, it’s so obvious that he was simply in orbit around Maggie. Getting over someone is never easy. It’s not just the big things, but a million tiny details about them that you have to get over. You can never fully forget that person, and nostalgia dictates that you’ll remember the good more than the bad, but when you finally come to terms that you deserve happiness on your on terms, you can finally put things in the past.

As a testament to Josh’s maturity, he actually sets Maggie up with Graham with his parting words to her, truly hoping to give her the happiness that she deserves. Josh then rallies Liz and Mike to go out on a Saturday night, because hell, Trackanon is dead, and the night is young for three single thirty-somethings.

Season one of Man Seeking Woman was an incredibly high-concept show, which was executed incredibly well. I’m very excited to see season two, where the specter of Maggie is finally gone, and we can really dive into the deep dark wells of neuroses that is Josh, and see where his love life takes him.

Man Seeking Woman will return for Season Two next year.