‘Dancing With the Stars’ Review: Bergeron and Company Celebrate Ten Years and Counting

Seems like just a few months ago (or maybe it WAS just a few months ago, since this show is on an average of 14 times per year) that we last watched our favorite cheese-fest celebration Dancing With the Stars. And yet, here we are again, only this time – the show is celebrating its 10th year anniversary, and they are doing it in style.

All of your favorites are back, including pro-dancer Derek Hough, who was rumored to not be returning, but “just couldn’t stay away.” The entertaining judges are back too. Cranky, old man Len, Horny Carrie Ann, and makes-no-sense , over the top Bruno. Julianne Hough has also joined the judges panel, because why not make the already 2-hour long show seem even longer with a 4th judges opinion? Most of the dances are about 60-90 seconds long – at this point, the judges are twice as lengthy as the dances themselves. Erin Andrew is back as the pretty-faced interviewer (I still miss Brooke Burke Charvey, who provided me with endless quotable comments, year after year), and my favorite host of everything and anything, Tom Bergeron, leads the pack once again with his wit, charm, and humor. So, let’s not waste any more time. Let me tell you a bit about each couple and what they danced in this week one episode. There are 237 couples, so this may take a while: 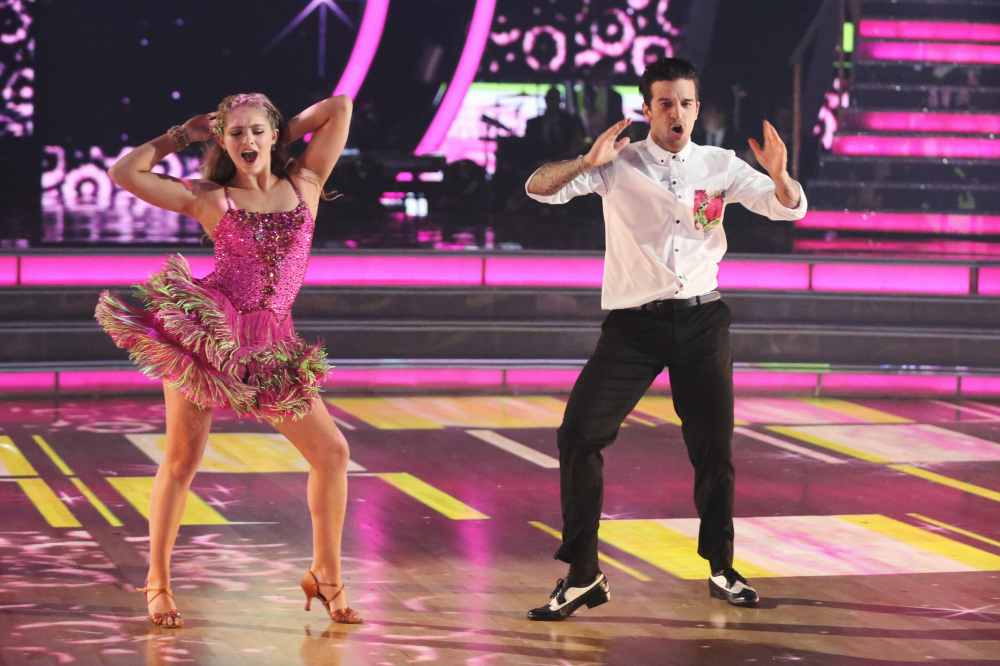 Willow / Mark: At 14 years old, Willow Shields is the youngest cast member on the show, ever. She is also the actress who plays Primrose in “The Hunger Games” movie series. Her and partner Mark Balis begin the night with their Cha-cha, which is quite strong for week one. Julianne told her to work on her legs, while Horny Carrie Ann pointed out to Willow that “your chest was open and your neck was elongated”. Tom, Erin, Mark, Len, Bruno, and a couple of guys from the makeup department all mentioned that Willow is only 14. It was mentioned about 356 times in about 10 minutes. WE GET IT! SHE IS ONLY 14!!! Scores were 6/6/6/7 . 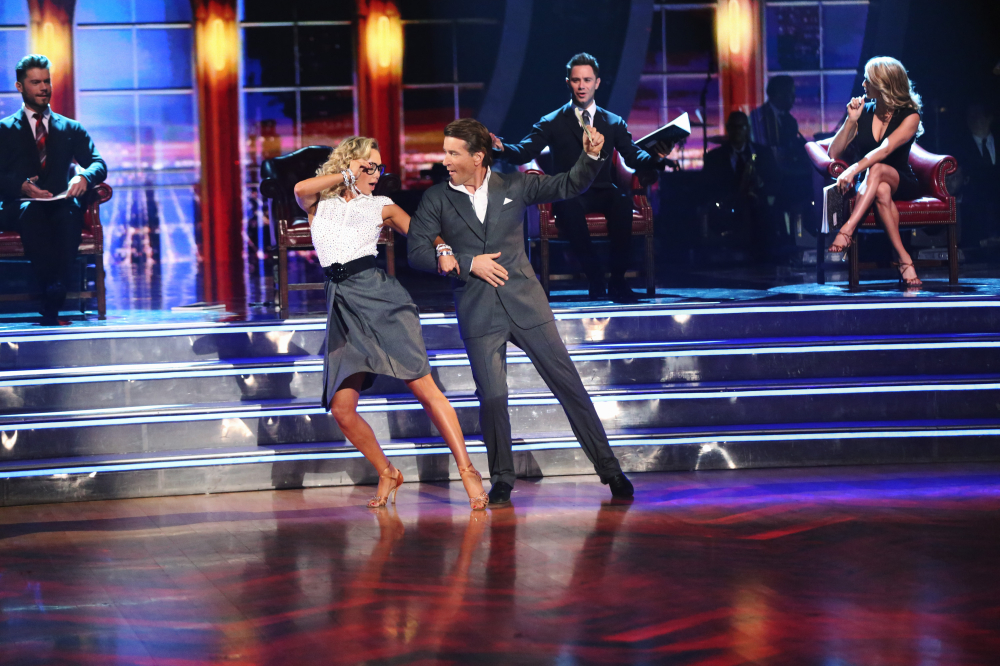 Robert /Kym:  This is the rich tycoon dude from the show Shark Tank, for those of you who watch that. I do not. What I noticed right away about this silly dude is that he smiles a lot. Like, a LOT. He is like a creepy game-show host with the constant smiling. I guess if I had that kind of money, I’d be smiling too, but he is still pretty weird. He told pro-partner Kym Johnson that if they win, he will buy her a plane. Her own private plane. Because what woman doesn’t want her own plane, right? Right. They did a Cha-cha with the theme of, what else, money. His dancing was a tad conservative and dopey, but not bad for the first time out. Bruno called him a “crazy dolphin”, whatever that means. Len mumbled something and then took a sip of his prune juice. Scores were 7/7/7/7, and Len passed gas from behind the judges table. 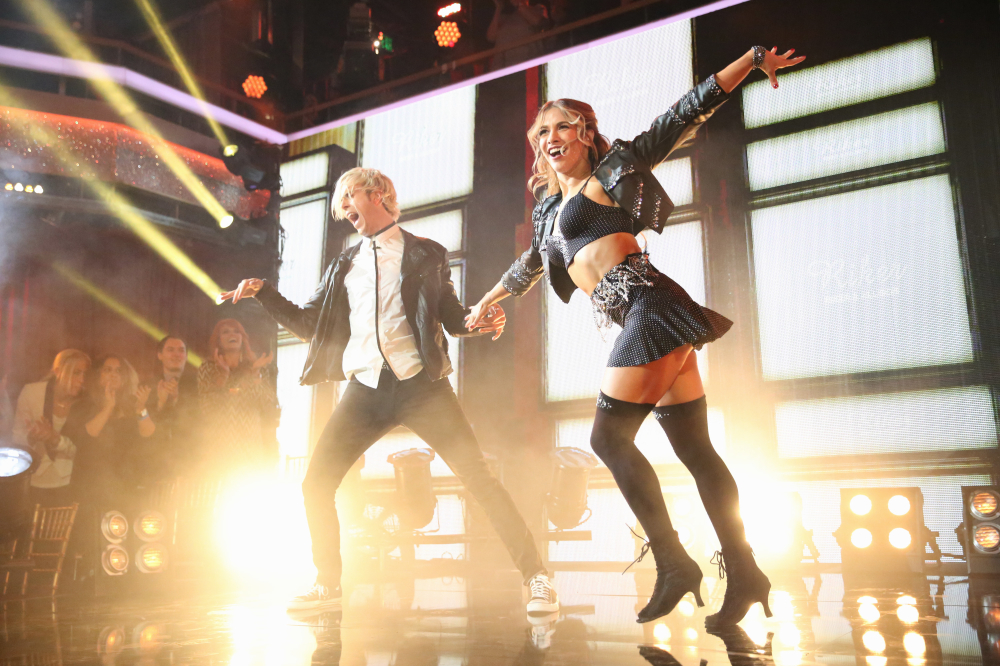 Riker / Allison:  Okay, so this is when I start to feel as old as Len. Every season, especially lately, there is at LEAST one or two contestants who I have literally never in my life heard of. I have no clue who this kid is. Apparently his name is Riker Lynch (really?) and he is the base player and singer in a duo band called R-5, which is apparently a real thing. All I know is that he has annoying surfer-dude-hair and he looks like he is eleven. His partner, Allison Holker, and he, did a great Jive to the song “What I Like About You”, that had a pretty awesome rock video vibe to it. Bruno did his first “standing up and ranting” of the season, except this time he stood ON the judges table as he raved about the pairs performance. “Cool, hip, brilliant!” Horny Carrie Ann touched herself under her seat as she proclaimed Riker as “driving the beat.” I bet you’d like it if he drove YOU, Carrie Ann, huh? HUH??? Scores were 8/7/8/8, and Brooke Burke Charvey watched from home as she sobbed into her 5th vodka and tonic. 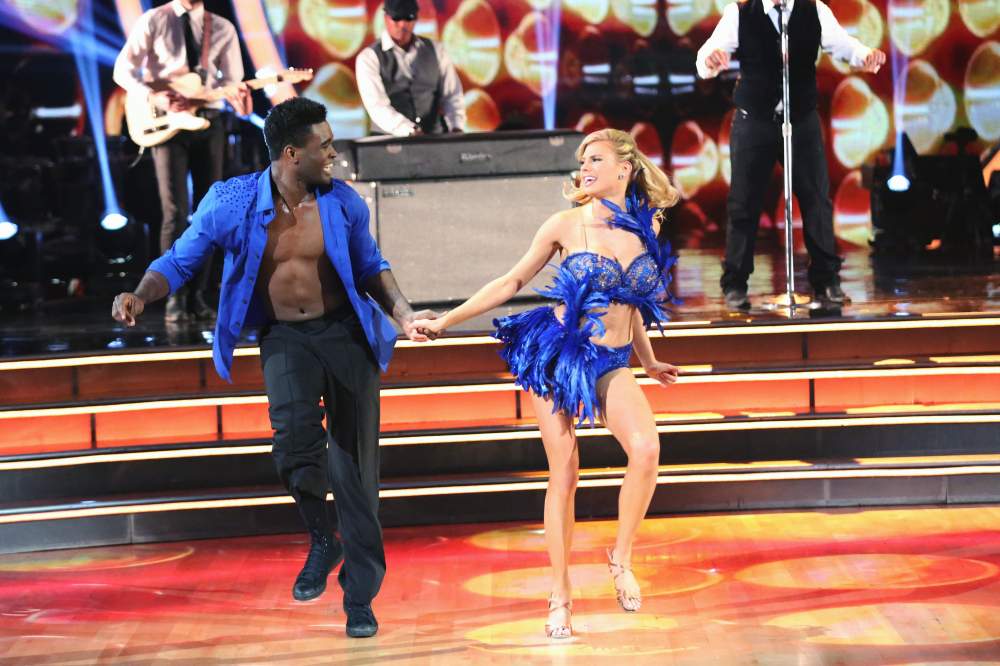 Boobs McGee / Keo: So apparently this chick is a model of some kind, and she is known for a burger commercial that aired during the Superbowl that featured her massive tits. All I saw was tits, the entire time she was talking and dancing. Just tits, tits, tits. Her boobs are ridiculous. They take up 3/4 of her body. A few seasons ago, Nancy Grace was on the show, and she showed her tits so much and had cleavage falling out of every costume, that I dubbed her as “Tits McGee.” Well, now we have “Boobs McGee”, which is the younger, hotter version, I guess. All I know is that my eyes hurt. She blinded me with cleavage. In rehearsal footage, she said she did the show to prove to people that she is more than just her boobs, but then every sentence after that sentence was about her boobs. They did a Jive, and between her boobs and Keo Motoepe’s bare lovely chest, there was a lot of fun things to look at. Len commented “There were a couple of things that stood out.” Bruno congratulated Charlotte, which is her actual name, on “carrying America’s most imposing frontage.” He received no reaction from the crowd. Just awkward silence. Even the crickets were embarrassed. Scores were 6/5/5/6, and Bruno’s lame joke got a negative 4. 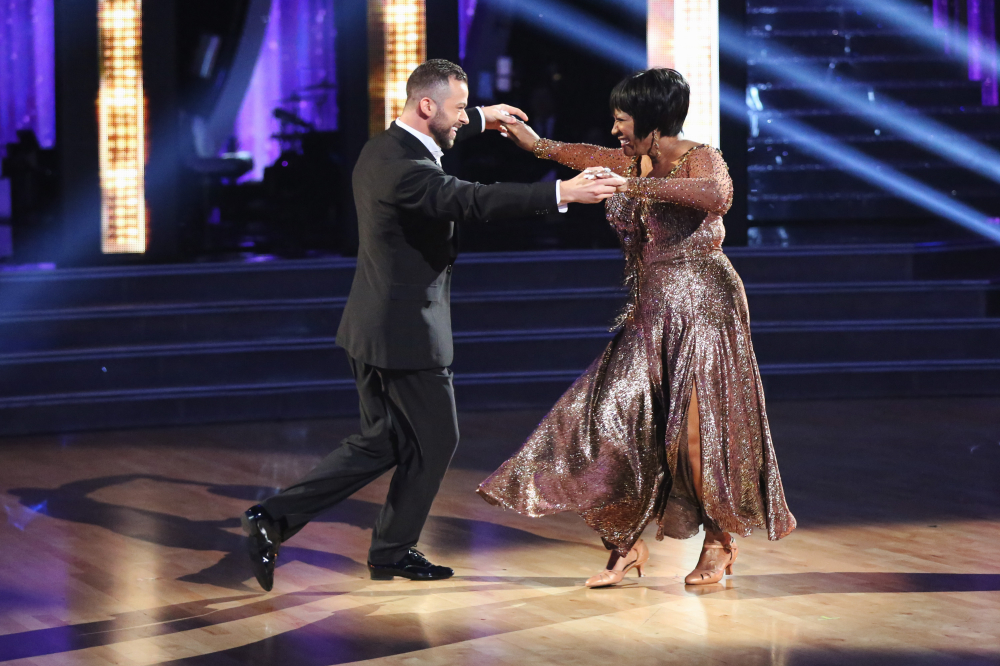 Patti / Artem:  So this is Patti, as in legendary and Grammy Hall of Fame singer Patti LaBelle, who says she has never danced before. She is paired with Artem Chigventsev, and their Foxtrot is quite good. Patti moves very well for a 70-year-old woman, and with grace even. Old man Len woke from his nap and said “You rung my bell!” (eewww!) Tom Bergeron’s hilarious response: “And that’s one rusty bell, let me tell you!” Julianne called the dance “pure joy!”, while Carrie Ann found it “simple and graceful.” In the post-dance interview, Erin Andrews asked Patti why she wanted to do the show. “Because I’m 70 years young and wanted to show that I can do something like this!” The crowd loved her and gave her a standing ovation. Scores were 7/6/6/6, and the crowd booed , thinking those were too low. 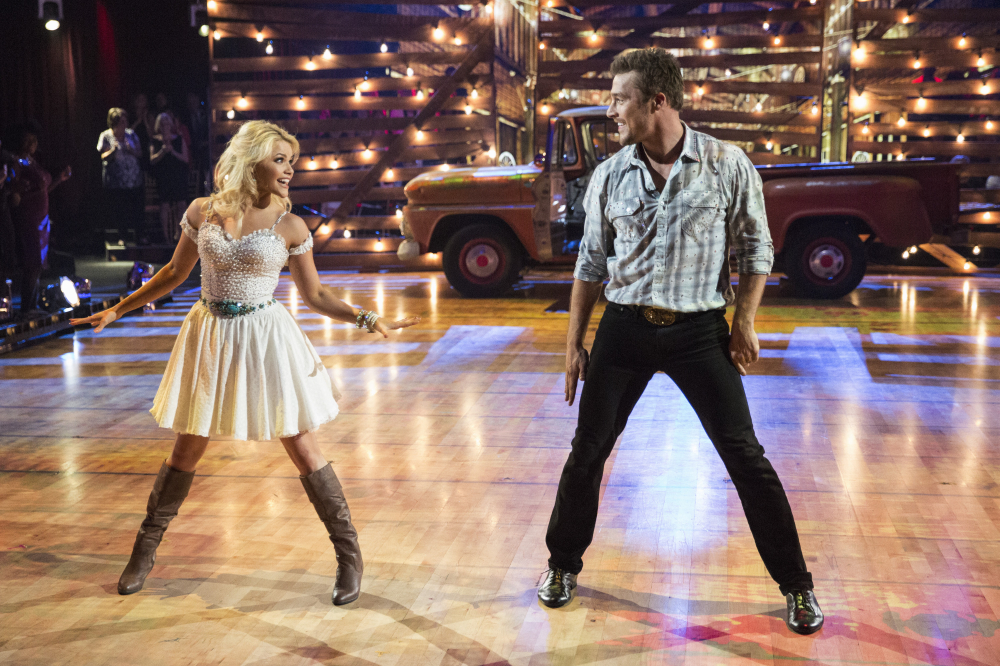 Farmer Dull / Witney Carson: Great. I can’t get away from this bore. I just spent the last 3 months writing weekly reviews for The Bachelor, and now this boring dullard crosses over onto THIS show too? The ONLY other show that I write reviews for? Oh, what cruel punishment is this? What torturous irony? And yes, I know I’m sounding a bit like a bad Shakespeare play right now. Farmer Blah is partnered up with Witney Carson, because her name is also Witney, like his now fiance Whitney, except without the H. His comment about this? “I’m engaged to a Whitney. Now Im dancing with a Witney. This might get complicated.” Ummm, no, Einstein. It’s really pretty simple. They have the same name. One of them you dance with, and the other you have a relationship with for a few more months until it inevitably doesn’t work out.

Their dance is The Jive, and it’s done to “Footloose.” They basically do the moves from the film, using a pickup truck as a prop to climb in and out of. The other Whitney is watching from audience, along with Bachelor host Chris Harrison, who got pretty much the same amount of air-time on his own show that he got tonight, the one time they panned the camera over to him. Bruno called Chris Soule’s “the salt of the earth” (huh?), while Horny Carrie Anne said that he has “charisma up the ying-yang”, and then called him a “strapping young man.” She really needs to get herself laid – it’s getting embarrassing now. Len made one of his horrific analogies by saying “like this truck, the dancing needs some polish. ” Right. Kind of like your wrinkly ball-sac. Polishing. Scores were 7/6/6/7, and Len’s old-man balls received a 3. Carrie Ann sent Farmer Boy a text backstage asking him to meet her in her dressing room later, and come take a look at her ying-yang. 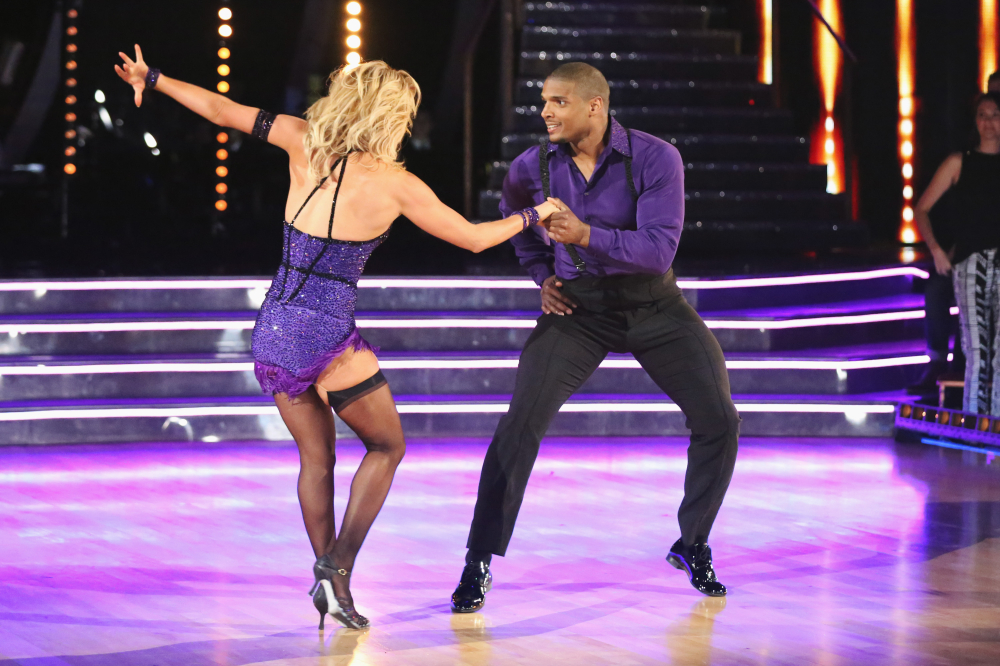 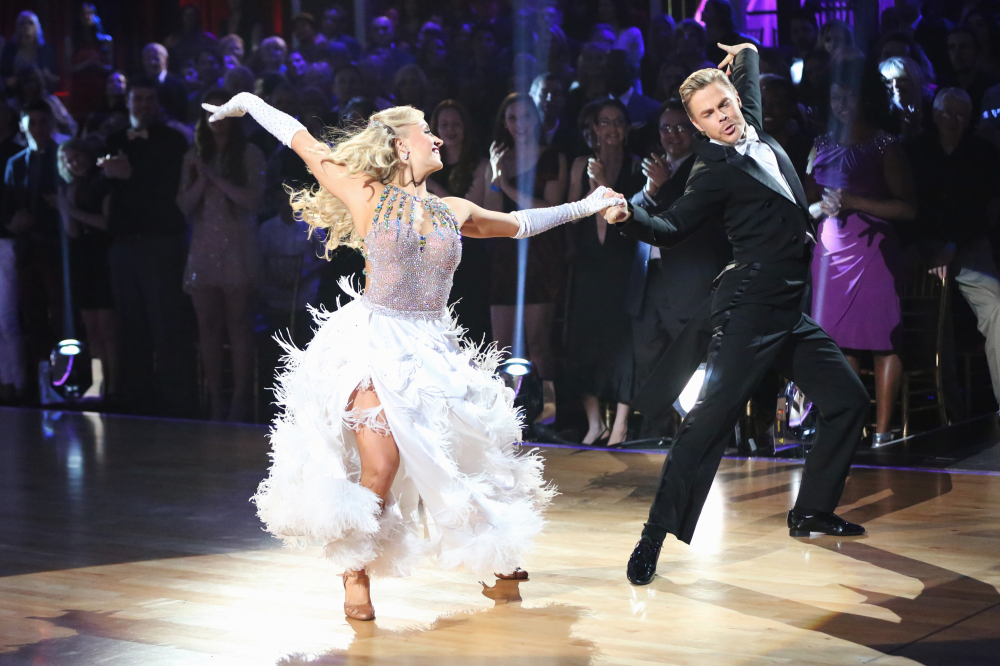 Nastia / Derek: Let me first just say how thrilled I am that Derek Hough is indeed back on the show, even though he is currently starring in The Radio City Rockettes Spring Spectacular. He is just awesomeness, and needs to be on this show. Nastia is a 5-time medalist in the sport of gymnastics in the Olympics. Their Foxtrot was more like an extravaganza than a first-week dance. It even had backup dancers and a Rockette-style kickline. The song was “New York, New York”, and the energy was fantastic. Bruno stood up and announced “there is nothing nasty about Nastia, my darling!” Scores were 7/7/8/8. Highest of the night. So far. 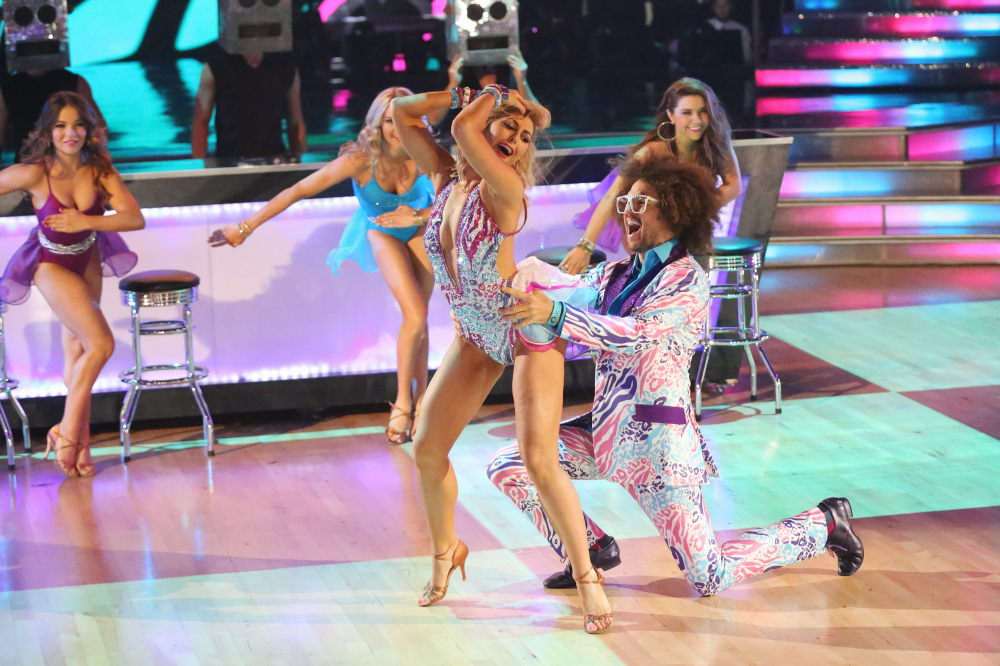 RedFoo / Emma :  So that’s your name? RedFoo? Really? That’s what you’re going with? Okay, then. He is the singer and one half of the duo from the band LMFAO. That’s really all I know about him, other than that looking at him makes me feel dizzy and headachey. His clothes are filled with scribbled color and his hair is all over the place and he has on giant ridiculous glasses and I need some Advil. Their Cha-cha made me feel nausea and unsafe. Bruno called it “sparkly lunacy.” But then again, he is also sparkly lunacy. Scores were 6/5/5/6. 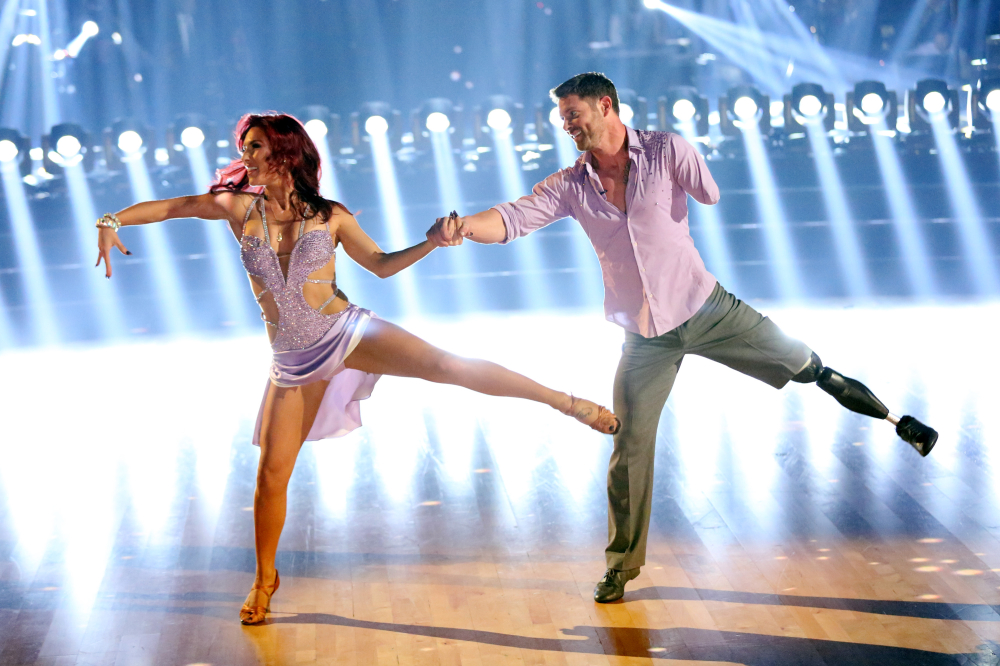 Noah / Sharna :  Former model and US army combat vet who lost his left arm and his left leg in combat. So, he is dancing on one leg and with one arm. He has a prosthetic leg but not arm. He runs marathons and things, apparently. I knew nothing about this man until watching him rehearse in the footage and then dance their Cha-cha, and now I think he is kind of amazing. Julianne complimented Sharna’s choreography , and Carrrie Ann called the dance “profound. You broadened my scope of what dancing is.” Tom Bergeron made the very true point that “moments like this are when this show is at it’s best.” Scores were 7/6/6/7. 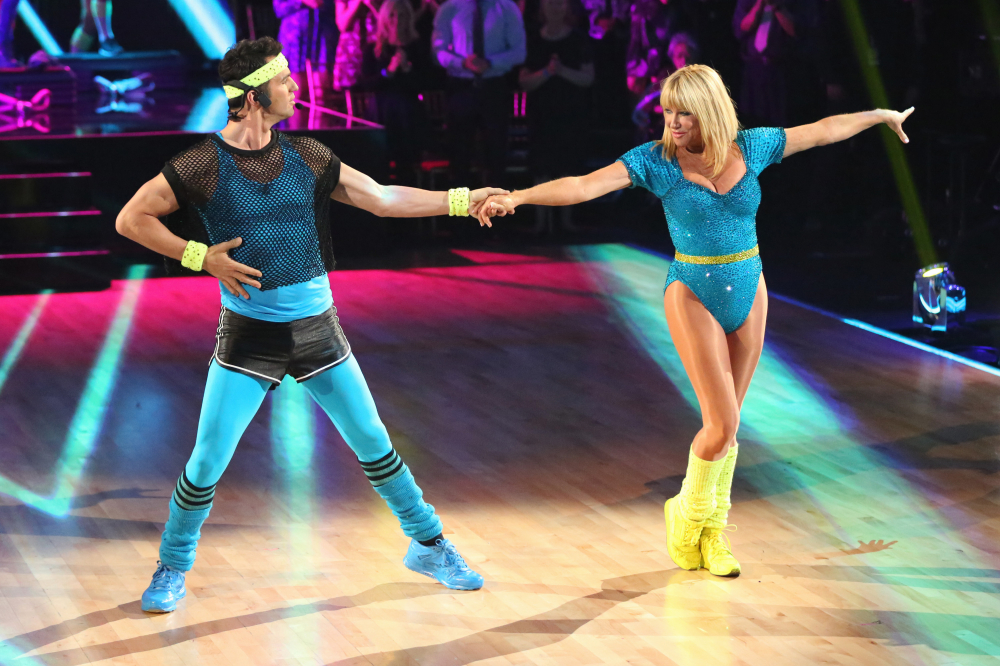 Suzanne / Tony :  Actress and Infomercial / Thigh-Master creator Suzanne Somers,, best known for playing Chrissy Snow on Three’s Company. She is now 68, and still has some amazing looking legs. They did a funny, cheesy-on-purpose Thigh-Master / exercise class style-video in hilarious workout getup, to the classic Olivia Newton John song “Physical.” Tom Bergeron told Tony Dovalati that he looked like “an athletic smurf” in his silly costume. Carrie Ann called Suzanne a “ray of sunshine.” Their dance was fun and bright. Scores were 6/6/6/7. 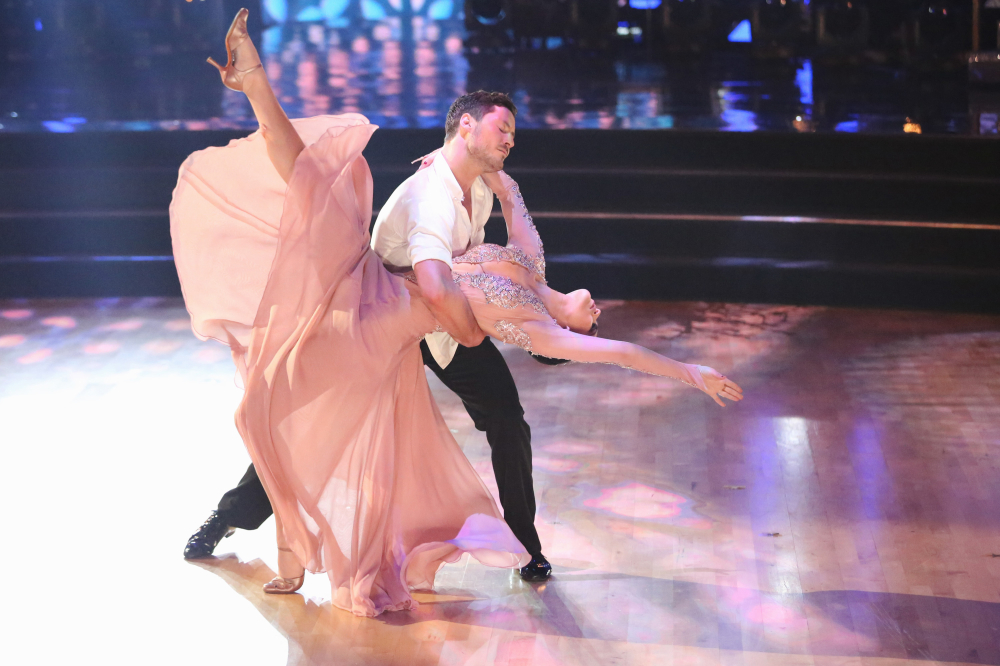 Rumor / Val:  The daughter of Demi Moore and Bruce Willis, and an actress in her own right, Rumor Willis is also a very good dancer. Who knew? She was the best of the night. The Foxtrot between her and partner Val Chmirkovskiy was elegant and mature, and felt like a dance you would see on the show in maybe week 3 or 4. Demi and Bruce were both in the audience, although not sitting together. Carrie Ann called her a “fierce competitor”, Len told Val “this could be your season” (to win), and Julianne said “What a vision! I have chills.” Bruno ended the comments with his silly pun “Rumer has it … big time!” Scores were highest of the night at 8/8/8/8, and Len fell face-forward into his prune juice.