‘The Magicians’ Review: How Many Can We Kill This Week?

Holy crap! The Magicians this week was insane as everything that could go wrong did and three important characters died. Let’s talk about all those deaths shall we?

Firstly, my girl Marina (Kacey Rohl), got the short end of the stick after she finally agreed to team up with Julia (Stella Maeve) and The Beast (Charles Mesure) to trap Reynard (Mackenzie Astin) the fox god. She performed the summoning spell, but instead of appearing at the warehouse where she performed the incantation, the god followed her home. Martin had whisked him and Jules away because he knew the deity would not show up he if immediately sensed his former prey. The older magician tells the hedge witch that if he were Reynard he would take his time and catch her while she’s not expecting him. Which is exactly what happens. Marina ends up going home and locks herself in with the fox god, who turns her cat inside and out and eats one of her fingers.

It takes awhile for Martin to disable Marina’s wards, but eventually he does and is able to temporarily freeze Reynard. But then Penny (Arjun Gupta) arrives to take The Beast back to Fillory for their battle with Julia trying to stop him (and gets transported as well). This unfortunately leaves Marina back alone with the cruel deity. She ends up dead of course. RIP. 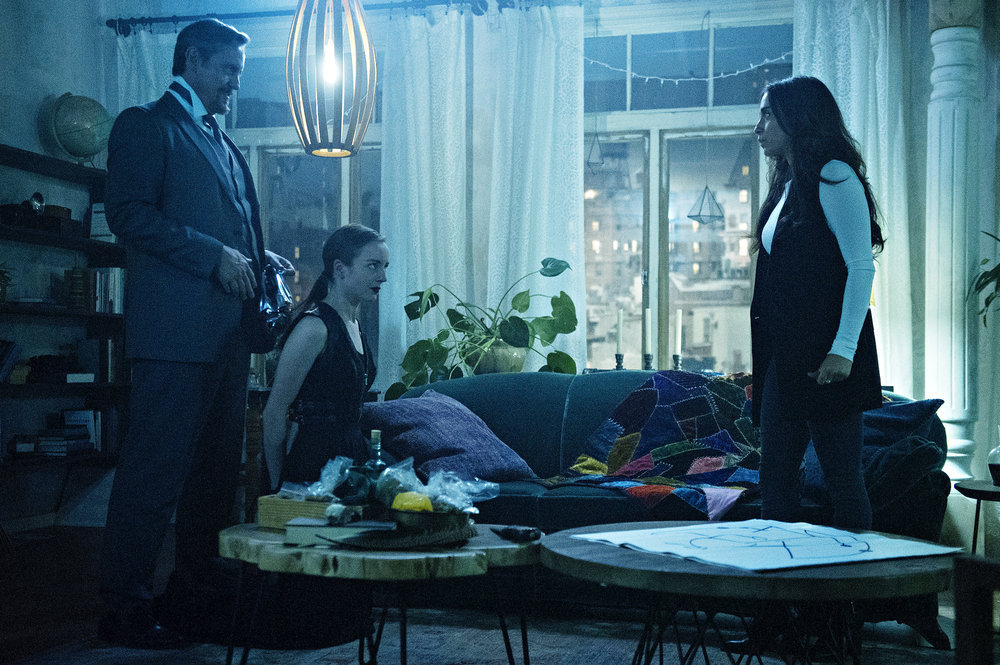 Meanwhile back in Fillory, things go terribly wrong again as Alice (Olivia Taylor Dudley) misses hitting The Beast with the Rhinemann Ultra and he soon vanishes before she can cast it again. They group (minus Penny and Julia, the traveler took her back to Earth) plan to head to the Wellspring where they’re sure he’ll be at to regain his strength. Quentin (Jason Ralph) gets the idea though that Eliot (Hale Appleman) and Margo (Summer Bishil) should go to Ember to petition for more godly juice while Alice and he go to the Wellspring ahead.

When they get there, they unexpectedly find Ember coming out, announcing to Martin that he had just defiled the well with his poop and its basically unusable now. Now that was unexpected! Still somewhat afraid of The Beast though, the god soon vanishes leaving an angry Martin who notices Alice and Q hiding. He transports them over to his location and attacks. Quentin dives in front of his ladylove to protect her and he gets his shoulder severely cut. Alice seems to be overcome with anger herself as she begins to fight back with more focus and intensity than before. She manages to knock Martin back against a rock and begins to do the Rhinemann Ultra again, but this time because the godly essence is almost gone, the spell proves too much for her and she burns up and magic consuming her completely. She vanishes, leaving The Beast to think he’s won. He is about to finish killing Quentin when glorious niffin Alice returns. She is now clearly much more powerful and is easily able to freeze him. She then rips open his shirt and hundreds of moths fly out with a very dead Martin Chatwin on the ground. However, Ms. Quinn turns her attention next on the man she used to love and plans on taking him out next. Margo and Eliot try to intervene but Alice is beyond caring. Feeling like he has no other choice, Q releases his demon and it manages to end the niffin’s life to everyone’s horror.

With the demise of three significant characters this week, The Magicians aren’t holding anything back and it’s both bold and gut wrenching. Firstly, Martin’s vanquishing closes the chapter on him being the main bad guy that the squad is up against. We first met him early on in season 1 when he stepped through the mirror while Q and the gang were in class and pulled out Dean Fogg’s (Rick Worthy) eyes. We learned his tragic backstory, he had wanted to escape into Fillory forever to get away from Christopher Plover, the author of the Fillory and Further series and his molester. In his need to protect himself he drinks from the Wellspring to gain power, had kept Plover prisoner in Fillory for years (as well as traveler Victoria), had tormented Penny mentally since he was a child, and eventually he kills his sister Jane with the same plans for Q and the rest. 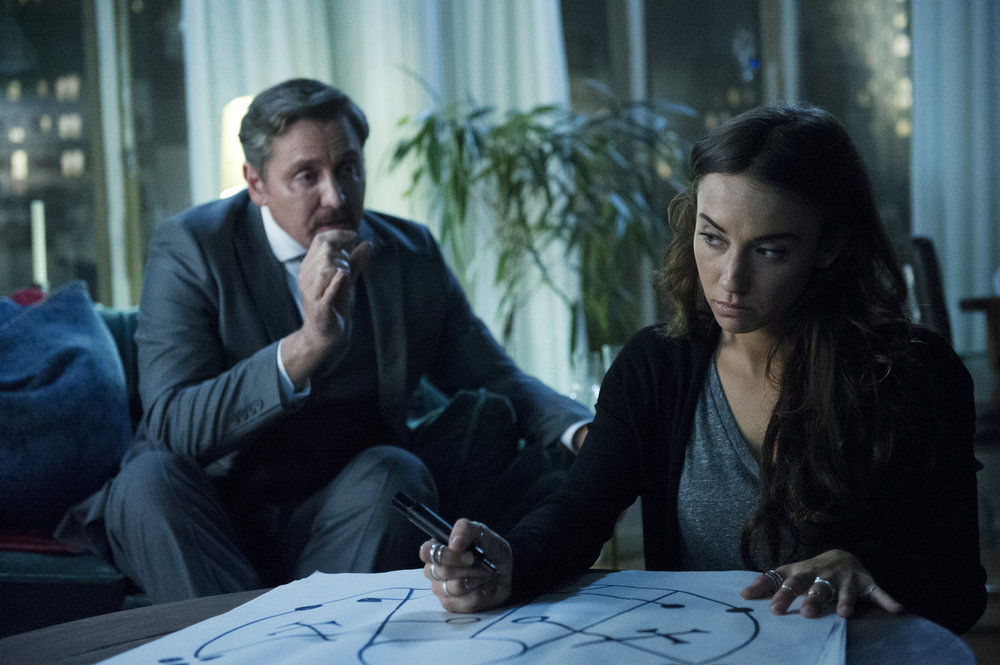 This season we found out that he had removed his shade so the would no longer have feelings for anything really. The shade seems to be what gives individuals their humanity and so once he no longer had it he had no moral compass. But I think that he largely did it as well so that he would no longer have to feel the pain from his childhood experiences. When he offered to do the same for Julia I wonder if he felt an inkling of real concern or was it really just pity? They did go through similar traumatic circumstances and so he understood that she needed revenge. He did caution that vendetta wouldn’t end well for her, but didn’t he do the same by locking up his own abuser? He should have listened to his own advice.

Martin was definitely a complicated character and while he did many horrible acts he also had gone through a lot of pain and hardship growing up. The saddest part is that the only way he was able to survive was to become a monster himself.

Speaking of unpleasant people, Marina was no picnic either. She was kicked out of Brakebills, became the strongest hedge witch on the east coast and also was needlessly cruel and vindictive. After getting her memories back (her mind had been altered when she was expelled from Brakebills) she banishes Julia from their community, but she’s the one who helps after the other woman is raped by Reynard. Marina pleads with Dean Fogg for aid after she finds the body of the head of the west coast hedges killed by the fox god, but he denies her sanctuary. So she has no choice but to go with Julia’s plans but unfortunately it doesn’t work out like they intended and she dies. While we never knew too much about Marina’s background, she wasn’t fully evil. She’s had moments of compassion and loved cats. She was also a lot of fun to watch on screen because her snide could totally match Margo’s. In fact, it would have been amazing to see the two women in a scene together. Alas, that can never be. 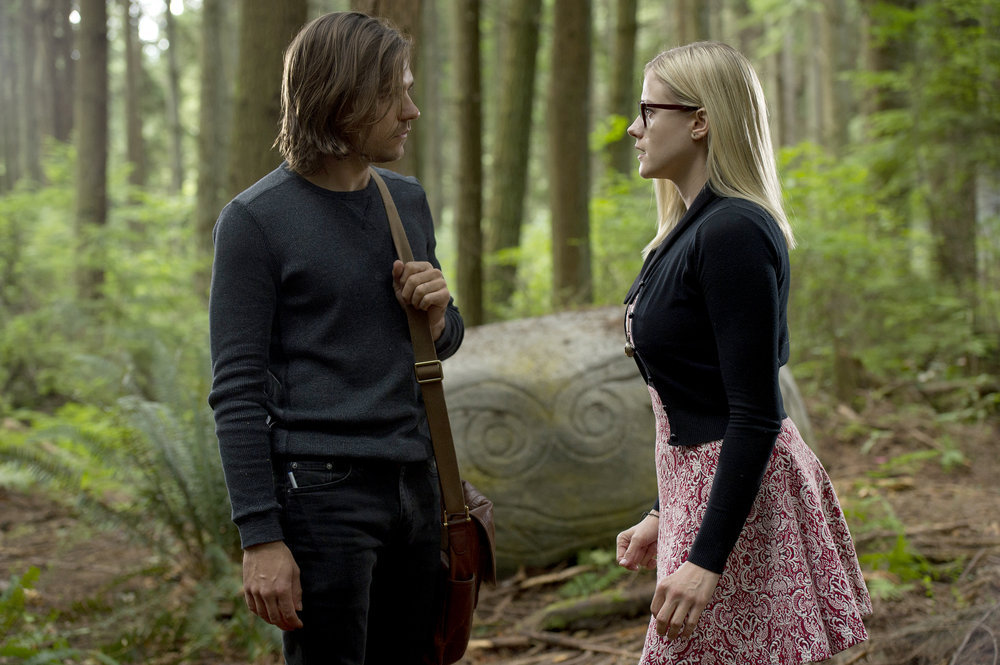 Our final death this week was Alice’s and that was a nail biting one. She had been so insecure about her magic since the first season and for a brief moment she finally had the confidence to challenge The Beast. She essentially sacrificed herself to become a malicious being of pure magic in order to beat him. But she lost her humanity and was about to kill her friends if it wasn’t for Q’s demon intervention. How tragic that both she and her brother had good intentions only to share the same cruel fate. Magic is not for the faint hearted folks.

Earlier in the episode Eliot, Margo, Alice, and Quentin all killed each other because of Martin’s curse and so this is Alice’s second death in 40+ minutes worth of TV. The curse was set up so that each of the monarchs who sat on their respective throne started to get tweaked out and paranoid that the others were out to get them. So they proactively tried to slay the other. Eventually Penny had an idea to stop their hearts with an injection and then revive them with adrenaline so that the curse would run it’s course and hopefully everyone would get brought back.

Alice was the smart, caring, and level-headed one in this band of miscreant magicians and her departure will certainly have an impact. Undoubtedly she was the most naturally gifted of them all and while the likelyhood of everyone surviving the fight was low, certainly the gang didn’t expect her to be the one to die. Still, this does fall along the same storyline as in books where Alice had sacrificed her life to kill Martin. However, in The Magician’s Land Quentin discovers that Alice survived somehow as a niffin and so we’ll find out if the series follows suit. Hopefully yes because she is too awesome of a character to be gone for good and I need more malicious Alice please.

Until next week’s episode!