On The Magicians this week Quentin, Penny, and Poppy team up to break Kady out of a psych ward, Margo and Eliot find leverage against the fairies, and Alice goes to extreme measures to keep Julia’s magic. 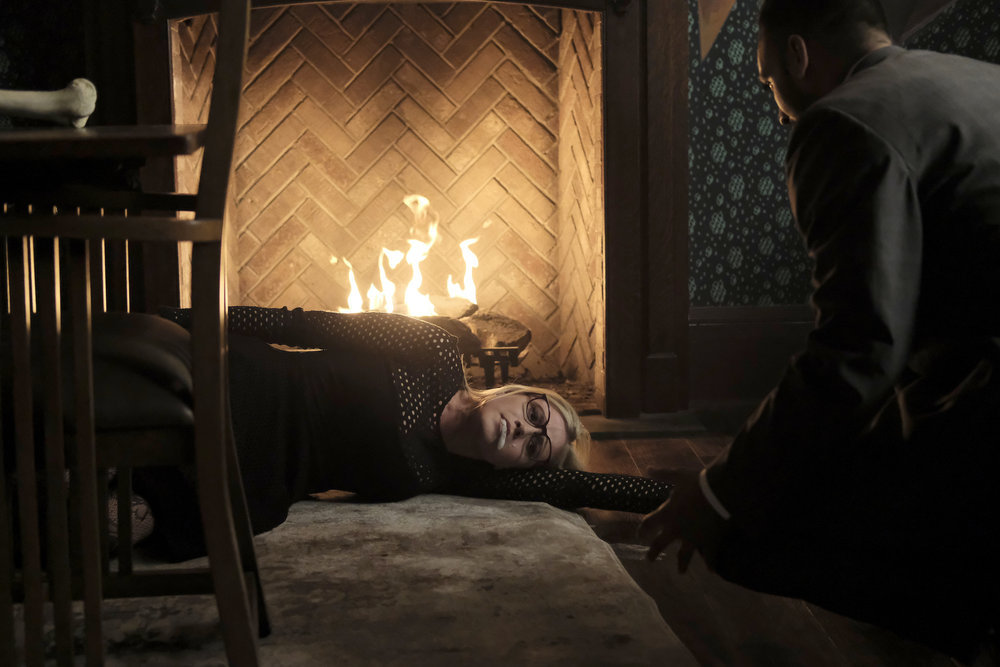 Upon returning to Brakebills from Fillory, Quentin, Poppy, Eliot, and Margo find Alice having a seizure from using Julia’s magic. As ex-niffin recovers, Q is reluctant to leave her side but is persuaded by Julia with the promise that she’ll get them through this safely.

He focuses his attention back to getting the fourth key in the Underworld. His plan? Well first he approaches Penny about going to the land of the dead to retrieve it from Benedict because if they don’t get it before the mapmaker moves on then they won’t know where the key will end up next. The traveler states that he doesn’t care but Q points out that the lack of magic is everyone’s problem and that he knows occasionally Penny stops being a dick when the fate of the world is at stake. The other man finally agrees to help however it’s not like he can just zap himself to the Underworld. Q agrees and says that they need a gatekeeper (aka a dragon). Poppy cuts in then and suggests that they use the Library’s dragon (called the Bookworm), which Penny confirms. It’s apparently used to send books to and from the Underworld. Penny though says that the creature is too small to send a fully grown human back and so Q proposes that he become a book then. The astral projection concedes the point but asks what happens next because if he’s able to send the key back it will be stuck in the satellite library, which is on another planet. Quentin declares that they just need another traveler. Poppy interrupts yet again by saying that the only other one she knows was kidnapped by the Beast. She’s obviously talking about Victoria. Penny had personally rescued the other Brakebills grad student who had then gone off the grid when she returned to Earth with Josh. Poppy claims that she can find her.

It turns out to be true and they show up at Victoria’s apartment. The other woman is pissed because Poppy slept with Josh in Fillory while she was still dating him. Unsurprisingly Victoria isn’t interested in helping them, but Q asks her to hold the truth key so that she can see Penny. The two travelers then chat where she explains that even if magic was back her situation was more complicated because she is currently working with a group headed by Harriet and they secret plans that involve freedom of information. Hmmm mysterious much? Penny tells Q and Poppy that Harriet won’t talk to him but the woman does like Kady. Except of course Kady is still stuck inside a psych ward and she’s not doing so good.

So their next step is break Kady out of the hospital with Poppy and Q posing as outside doctors that have to come to evaluate her (since facilities can’t hold people against their will for more than 15 days unless they are certified as crazy by an outside evaluator). The plan doesn’t quite work out due to numerous circumstances, although eventually they do manage to get her out thanks to multiple distractions. Kady meets Harriet at a diner and asks for a favor but the older magician doesn’t want to help because she still hasn’t been paid back for the last time. Desperate, she makes a deal wherein they’ll help Harriet’s group get into the Library so that they can rob it. As Kady tells the group this, Q isn’t happy about it but doesn’t see any other way. Penny tells his lady that the Library has crazy defenses with her countering back that she knows what she’s doing. Reluctantly he gives in and she tells him to do what he’s gotta do. Before leaving the traveler tells her that he loves her and he’s sorry that they are cursed. Awwwwww.

Back at the Physical Kids’ cabin, Q has a mild freak out telling Poppy what if Penny can’t find Benedict or the key and their plan fails. She kisses him suddenly and says that she’s short circuiting his panic attack because it’s getting annoying. They should just have some fun because there are a lot of things they can’t control. Quentin decides to go with the flow and the two continue their make out session. 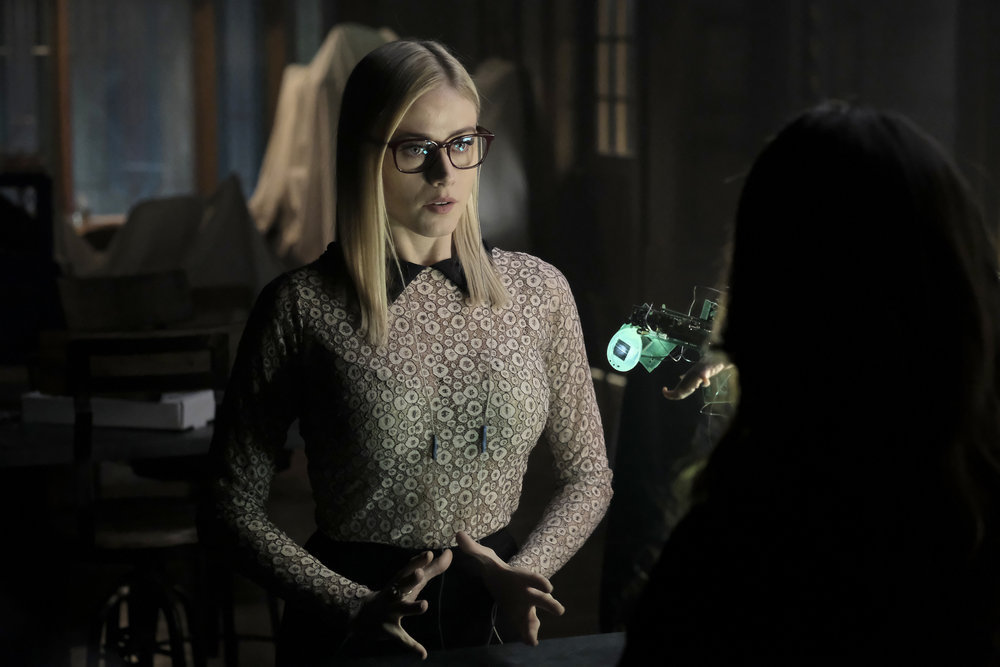 Meanwhile, Dean Fogg tells Julia that her power is killing Alice and she needs to transfer it back to herself. However, she needs magic to be able to do that and so he contacts Irene MacAllister and they explain the situation. The elder female magician isn’t exactly keen on assisting them, though does offer her help in exchange for a future favor. I also don’t think she’s realized that they took a key from her home. Julia agrees and she is given a substance that looks an awful lot like cocaine except it’s made from a magical creature. With Alice gone, the hedge witch is forced to snort the white powder in order to cast a locator spell. Ms. Quinn is out with a vampire that she’s paid to turn her so that she’d be able to retain the magic. She is stopped by Julia and in her anger hurls the other woman against a wall with the hedge witch being knocked unconscious. When Jules wakes up, Alice apologizes and says that she’s transferred all the magic back. The two women have a heart to heart, recognizing that each has had to deal with problems they didn’t ask for. Julia confesses that the thought of Reynard’s magic in her still makes her sick though Alice tells her straight up that it isn’t the fox god’s anymore, it’s hers.

In Fillory, Eliot and Margo tell Tick to cover for them as they take the fairy babies back to earth as ransom. They hide the mushroom eggs inside a cabinet in the Physical Kids’ cabin and ask Todd to look after them. Unsurprisingly he fails as Fray discovers the stash and reveals their actions to the fairy queen despite Fen asking her to trust Eliot. The high king and high queen had asked the magical monarch to cut a deal with them where they would return her babies and in exchange she would gift Fillory her bathtub. But once she learns of their duplicity she proposes another arrangement where if they don’t hurt her children she won’t hurt theirs. The fairy then does something to Fray who looks shocked that she would be harmed but the older creature explains that she betrayed her own parents so how could she ever trust her. Fen looks at Eliot who looks at Margo and says that he doesn’t want to be the parent who turns their back on their daughter. Having grown a conscience, Fray suddenly blurts that she isn’t actually their kid and she’s just another human. Margo tells the other queen to spill and the other woman uncomfortably reveals that the princess actually died during childbirth. Poor Fen!!! Later on she tells Eliot that she just can’t be in Fillory right now because it’s too hard. Guessing he sends her to Earth to get away from all the craziness.

In the end though, it’s still the fairy queen who gets the last laugh because while Margo and El think they’ve trapped her, she easily flips the script on them. In a carriage ride to who knows where she tells them that the children of Earth have been making a mess here for some time and she can no longer cover for them. As their vehicle stops, a mob forms and the two magicians are taken away by extremely pissed Fillorians.