‘The Magicians’ Review: All Magic Comes With a Price

This week’s episode of The Magicians brings some semblance of normalcy back to our squad of magicians, well as normal as a life with magic can get anyways. This time though Q is dealing with his father having a grave illness and his abilities does squat to help.

Quentin’s father has made a decision not to undergo treatment or surgery because of the high risk that his condition could get worse in doing so and he’d like to spend the rest of his days actually trying to repair his relationship with his son. At first Q is unable to accept this and tries to find a way to cure his dad’s cancer with magic. He even attempts a forbidden spell and uses Cancer Puppy as his test subject with Eliot’s help. This poor dog was enchanted to remain a puppy, but still experienced the effects of his true age at 150 years old (in dog years I’m presuming). They fail and the adorable pup is with us no more.

After being reprimanded by Dean Fogg, Quentin finally accepts and understands that all magic comes with a price. He reveals to his father that he is a real magician by putting together a model plane that he damaged when he was very young much to the older man’s amazement. He might not be able to fix his dad, but Q can give his father some measure of happiness by not only repairing the plane (which held sentimental value) but by also showing his true self to him.

Dean Fogg tracks Alice down at a farm where she’s been since leaving Brakebills (she left because Quentin bound her brother’s no longer human soul). She is reluctant to return but is convinced by the dean to give it another try after he confesses that he felt personally responsible for her family’s loss and didn’t want to take more from them (that’s why she wasn’t invited to take the entrance exam). He also admits that he was wrong and that believes she is too talented not to be at Brakebills.

Alice first runs into Quentin, Eliot, and Margo at an alumni function being held in school with her famous aunt. The event was a meet and greet for students looking to get a mentorship with a distinguished alum. Q tries to apologize again and she says that she shouldn’t blame him because the truth is that her brother died five years ago. The situation becomes super awkward and she goes off to join her aunt.

Meanwhile Eliot and Margo are determined to get closer to her so that her aunt might pick one of them to be her apprentice. Their attempts at bonding fail but points for sheer effort. We should all be so lucky to enroll in Eliot’s graduate drinking program.

Alice encounters Q next when she brings him a note from the administration office about his dad. This unfortunate circumstance though gives them common ground and they are able to understand each other better. She even helps him disperse a very strong spell he casts out of misery during a school game. By the end they’ve become lab partners and she tells him that he’ll get through this. It looks like Alice has decided to stay after all.

The mischievous twosome were in competition with each other in this week’s episode as they both wanted to become Gengii’s apprentice. Alice’s eccentric aunt apparently runs a Camp David-like retreat for magicians and is a known figure in the magical community.

Margo’s competitive nature really came out during the Welters game played with the alumni in attendance. Welters is played on a large field with squares made up of different materials like water, sand, grass, etc. The object is to take as many squares as possible through magic. The Physical Kids end up winning thanks to Q’s massive spell that conquers the whole board. Btw, their Welters uniforms were kind of awesome.

Unfortunately for Eliot and Margo though, their plans fail and Gengii doesn’t end up picking either of them. But the duo’s resilient natures kick in and they bounce back because they don’t need mentors anyways.

We pick up from last week after poor Jules was kicked out of Marina’s group and she is not doing so well. The hedge witch tries a spell that she found through Google and nearly burns her apartment down while suffering some minor burns (it was an invisible fire spell fyi). Julia turns to Pete who is somewhat sympathetic to her plight and who tries to get her to see that there are other things she can do just as Quentin once did. She refuses to listen though and ends up using sex to get information from him about other safehouses and hedge groups.

She goes to one that he recommends only to find that the hedge magicians there were far behind her in knowledge. Pissed off, Julia confronts him and Pete explains how his hands are tied and he won’t directly oppose Marina. The other safehouse she went to was the second best in their community but he suggests that they run away together outside of the city to where there are other places with artifacts of power. Julia says no because she loves her boyfriend and isn’t wiling to go with him. Pete rightfully throws back at her that she just slept with him a few days ago and that was a poor way to show how much James mattered to her. He tries to get her to understand that it won’t work with her boyfriend because he doesn’t know about the most important part of her (magic duh) and she can’t say anything because it’s too dangerous. Julia is in full rebel mode and says that Marina’s stupid rules don’t apply anymore and if Pete doesn’t want her to tell James then he needs to give her some spells. He refuses and she walks away.

Kudos to Pete though who went on the offensive and wiped James’ memory so that he no longer knew Julia. Enraged, she finds him again and he argues that he was actually protecting James from her because she was a train wreck waiting to happen. She’s refused to listen to any advice he’s given her and would only hurt herself and others. Ouch. Thus begins Julia’s descent into madness.

Penny’s journey this episode is by far the most exciting as his traveller’s magic begins to take him to more dangerous places. He first meets his mentor Stanley who straight up tells him that their power is a terrible life-destroying burden. The older man then flashes his prosthetic leg, courtesy of frostbite when he zapped himself to the Himalayas. Stanley then recommends that Penny get a tattoo that will bind his body to the earth so that he can only travel via astral projection.

One night he ends up ghosting himself into an unfamiliar dungeon after hearing the pleas of a trapped woman. Penny finds her wrapped in chains and he notices that she has the traveller’s tattoo. A moth appears suddenly and The Beast walks inside, asking Victoria if she’s ready to talk yet. He turns his head and says hello to a freaked out Penny who retreats back into his body. Soon after he goes to confront Stanley who admits that there was one other traveller who had mysteriously disappeared along with most of her third year class (we heard about that back in episode one). His mentor said that he had no idea she was still alive but had no intentions of rescuing her. His advice, get the tat asap.

Sometime later, Kady sees him sketching a crest that he saw in the dungeon and urges him to tell Alice and Quentin since this involved The Beast. Penny reluctantly agrees and goes with her to the Physical Kids’ cabin. Taken aback, Q whips out a book and furiously combs through the pages and then shows them the exact same image. Q then tells them that is the crest of Umber and that he thinks Penny went to Fillory. YEEEEEEEEEEEEEEES. 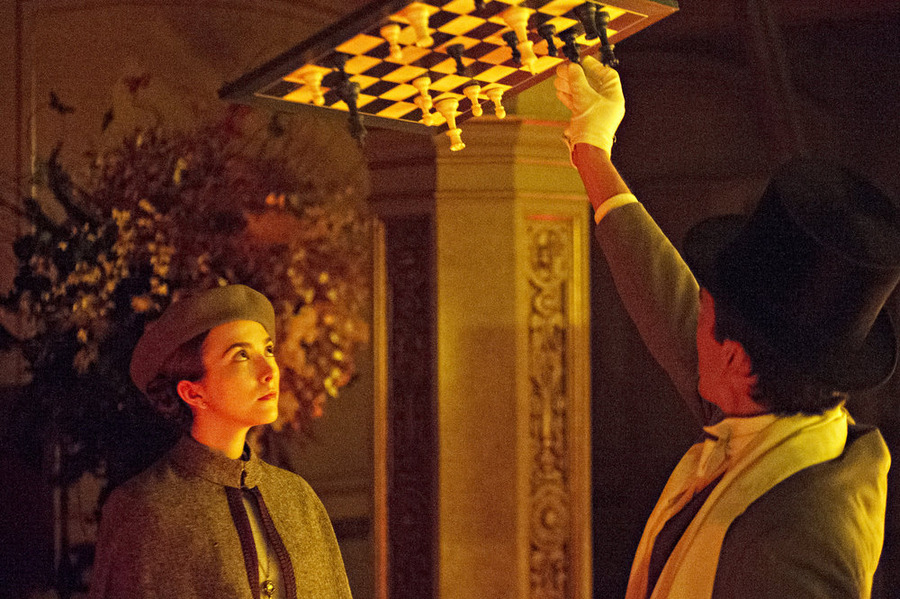 The show tackled some very serious subjects this week and showed audiences that magicians were tools of magic, but they couldn’t fix everything. Both Alice and Q had to let go of people that they loved while Julia grappled with herself as she is forcibly disconnected from magic and James.

As Fillory becomes a larger part of the narrative as well, I’m beyond excited to see how the squad is going to handle this new fantastical realm. So far, the series has deviated in some ways from the novels but I for one am thoroughly enjoying these new storylines. It’s going to be so much fun to see more of The Beast and how the magicians will fare in an actual quest.