‘The Magicians’: The Horrible Fourth Key and R.I.P. [SPOILER]

In this week’s episode of The Magicians, the fourth key is found and it’s just the worst…

Quentin, Eliot, and Margo returned to Fillory after discovering that all the keys are able to create portals, which is highly convenient by the way. While both the high king and queen have to go about the business of ruling their kingdom and dealing with the fairy invasion, Q finds himself questing on his own. He believes that the fourth key is somewhere in an uncharted stretch of ocean called The Abyss. It’s also always permanently night there. Eliot wishes he could go but duty calls and he suggests that Q take Benedict instead. That’s a logical choice since the mapmaker should be a good resource as they go through an unexplored body of water.

On the Muntjac, Quentin is living out his fantasy of being a swashbuckling pirate of sorts. He can’t help but let out a whoo, play with a very sharp-looking sword, lookout with his telescope, and get a card game on with the crew. As they reach The Abyss, Q and Benedict hear the voice of a woman calling out for help. At first, we’ve got to wonder if this is some kind of sea monster luring unsuspecting sailors (much like a siren). But it turns out to be another Brakebills student from the missing class of 2016 (the same class as Josh and Victoria). Poppy Kline (Felicia Day) introduces herself as a draconologist, post-graduate fellow and field researcher. While changing out of her wet clothes, she begins to tell Q how she came to Fillory with a bunch of students for spring break and it didn’t end well for them. Poppy then suggests he pour her a drink and she’ll reveal the whole story. Weirdly she looks over her shoulder then as if there is someone there, but when the camera pans over the space is empty.

As the two are drinking their libations, Poppy explains how their boat got wrecked off the coast of the Truth Waters. She had spent two years on that ship and then it was over in an instant. Somehow she had managed to survive on a raft for three weeks by herself. Poppy mentions how it was extremely hard especially when magic suddenly went out and asks him if he knew anything and that hopefully someone was fixing it. Q jumps in and says that someone is actually him and dives into the quest for the golden keys. Hold your horses though second king of Fillory because the other graduate student whips out a key that is strung on a leather cord. Quentin stares dumbfounded as she says that she stole the key. Her group had stumbled upon a small island covered with treasure and it turned out to be dragon breeding ground. The massive magical creatures were too busy to notice and so she was able to steal the key. Poppy then takes off the cord and gives it to him from one quester to another. He asks her then if she knows what the key does because each one has a unique functionality. She claims that she doesn’t but pushes the magical item closer to him and says maybe he can figure it out.

As Q gets super wasted and passes out, Poppy then takes his hand and forcibly has him hold the key. When he wakes up, he is staring at another him and this version is mean and horrible. As Quentin freaks out and asks one of the Muntjac’s crew members if they can see his doppelgänger (of course the other man can’). Pissed off, Quentin goes to find Poppy who is doing yoga in another room. He asks her what the hell is going on and she comes clean saying that the key does have a power. It takes the darkest parts of a person and projects it into some kind of depression monster. She adds that it can’t actually hurt you unless it gets into your head and gets you to hurt yourself. Poppy tells him not to sweat it though because he was so happy, positive and a lot of her other shipmates were psychologically damaged (they had passed the key around amongst themselves since it only affects the last person to touch the object). This is not what he wants to hear because he isn’t positive and happy normally. Q does suffer from depression and had been prone to suicidal thoughts, hence being in a facility back in season one. Poppy advices to just pass it to someone else on the boat, but Q is unwilling because of the 50% chance that someone might kill themselves because of it. He is just going to hold onto it until they get back to Whitespire. 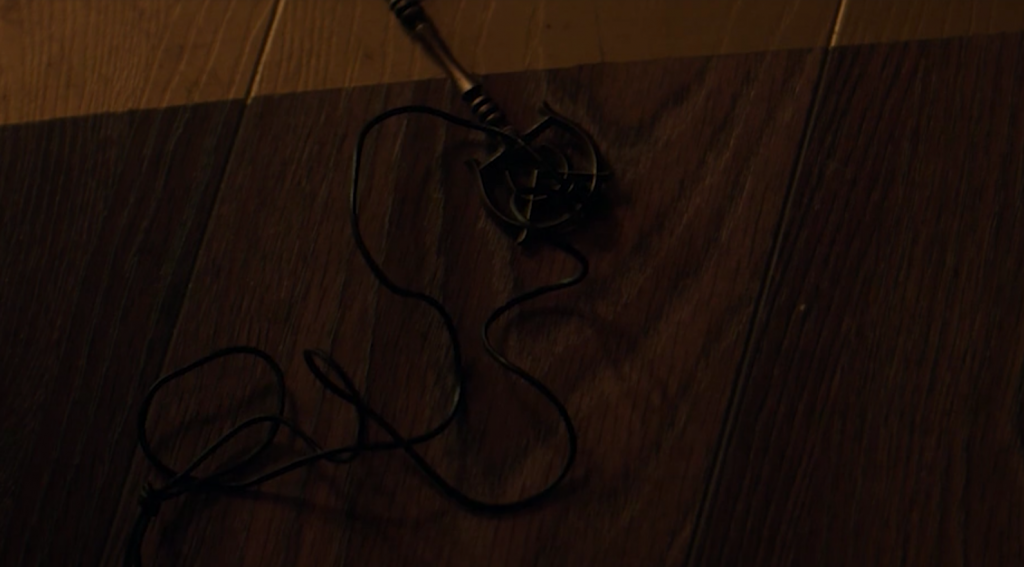 The depression monster is the critical voice in your head come to life.

“Your problem is your hair. I know you’re just trying to hide your face but it only really makes it worse. Seriously, have you ever noticed that your face kind of looks like a foot. Feet head frown lines, I mean you’re definitely aging prematurely, which is a symptom of early onset Alzheimer, which funny both your grandparents had and you will definitely get. So then you’ll be a senile frowny foot face.”

Q tries a number of activities to try and distract himself but nothing works. While the depression monster started with the annoying surface insults, it starts to get to the deeper stuff like telling Quentin it was his fault for keeping magic from Julia that led to her sexual assault. Next it talks about how he killed Alice and she’s never going to be the way she was before. It tells him that he’s willing to destroy everyone around him to find something that makes him feel ok, but that he is never going to feel ok. Q and the depression monster head to the deck of the boat where it continues to rain the magician that nothing can save him, not Fillory, not Brakebills, not the quest and to just do it, kill himself. Geezus. As he stares at the water, two glowing red eyes seem to appear from the dark murky depths below and it looks like a dragon! Just then Benedict grabs the Fillorian king from the edge and confesses that he understands what Q was contemplating and that he’s thought about it as well. The mapmaker though has never told anyone about it because his parents taught him never to talk about his feelings. Benedict comments that in the old days when sailors went mad they would tie them up on the mast so that they couldn’t harm themselves or anyone else. Quentin thinks this is a brilliant idea. He makes the other man swear that no matter what he says he won’t untie him until they get to Whitespire.

Sometime later, Poppy checks in on Q at the mast and apologizes for giving him the key and the depression monster because she thought he could handle it. She offers to take it off him for awhile but he says that he doesn’t trust her not to pass it off to someone else. He says that the keys aren’t always bad and sometimes they help like with the keyholes. Poppy though had no clue that all the keys could create portals until Q tells hers so she looks for it in his jacket pocket then bids him adieu. She’s been stuck on Fillory this whole time and now has her way to go home. He calls for Benedict to untie him, but of course he doesn’t because his king had instructed him not too! Q commands the mapmaker to stop Poppy and not to let her leave with the key. Just as the grad student opens a magical door on the Muntjac’s wall, Benedict tackles her. Looks like this passage leads to the Neitherlands? It looks like a very dark cave of sorts.

When Benedict comes back up the deck, he tells Quentin that he’s a failure but the king notices that the other man actually has the key. But oh crap that means the depression monster is now with the Fillorian. Q tries to tell him to not do whatever it tells him to do, but the other man is too far gone and jumps off the ship. A crunching noise is overheard as a dragon emerges having just consumed Benedict and says “yummy” before disappearing back into the water.

Poppy had actually been knocked out by the now deceased Benedict and when she comes up looking for him. Q fills her in on the other man’s sudden death. She unties him and the two go down to the cabin where he tries to figure out where the key went. The dragon expert does give some useful information that since the magical creature is a gatekeeper, aka a portal itself, likely the key went to the Underworld. Well now that sucks because his last trip down there didn’t end so well.

So while the squad have three keys in their possession, the fourth is still yet to be fully claimed. But at least Q has an idea of where it’s gone. 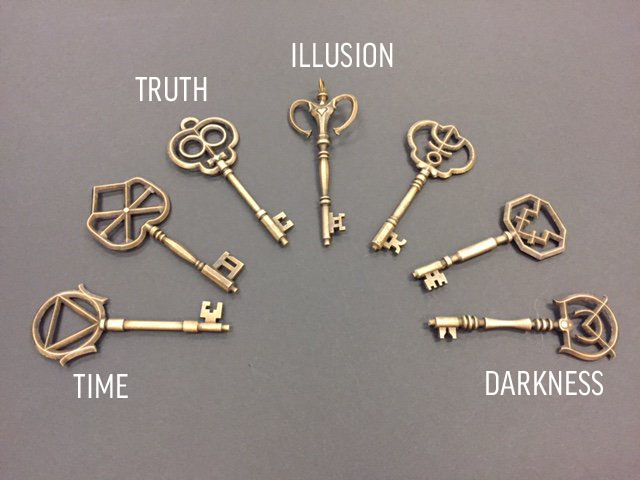 Illusion Key – summons whatever you fear the most 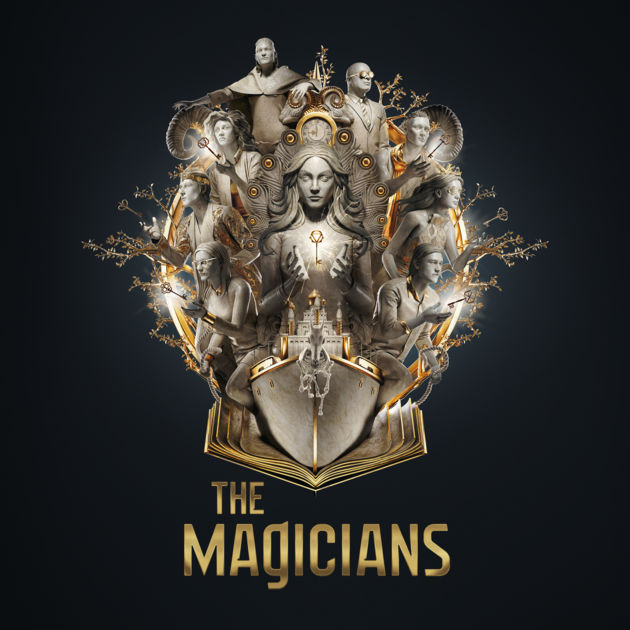 UPDATE: Thanks to the reader who pointed out that Penny had the darkness key and Alice had the truth key!

Based on the season three promo art above, it seems that Julia, Quentin, Alice, Penny, Kady, Margo, and Eliot each get a key. It could be that each key is meant for a specific magician with Eliot having the illusion key, Penny the darkness key, Alice the truth key, Julia the time key and Quentin, Kady, and Margo have the three others that haven’t been discovered yet.

Now to the Underworld.