The gang in Lost Girl cleans up real nicely as they are invited in a fancy party by the ancient Faes under the guise of honoring Bo, but naturally more underhanded things are afoot. We also finally see daddy Hades in the flesh (sorta) and surprisingly the meet and greet is not quite what his daughter was expecting.

In the aftermath of Tamsin’s rejection last week, she’s decided to vacate the premises with a protesting Bo who doesn’t want to loose another important person in her life. Bravo to the Valkyrie for putting herself first. Bo should understand that Tamsin can’t just switch from being in love with her to just friends again overnight. Before heading over to Motel 6, she hands the succubus an invitation with the triskele seal on it.

At The Dal we find out that Dyson, Lauren, and Trick all received invitations of their own except poor Vex! It is a little weird that Vex (a powerful Mesmer) didn’t get an invitation while Lauren did. Though Lauren did change the Morrigan into a human so she gets points for that. Bo thinks that this is all connected to her father and the gang decides that they should attend the soiree to find out what’s really going on. Dyson even brings Mark along whom he thinks is ready for his first mission, despite still not having shifted yet.

The game plan is to somehow figure out the ancients’ weaknesses and then take them down. In the elevator on the way up to said party, Lauren asks if this could be a trap. OF COURSE IT’S A TRAP. Parties thrown by people killing ancient Faes don’t exactly scream warm and fuzzy. Still, they soldier on and are greeted with a boisterous crowd there to welcome Bo. Are we really surprised? Nope.

Dyson is on Hera duty with Lauren giving him an injection of bug spray to prevent another lord of the flies attack, Trick will watch the crowd for unusual activity (but really he just wanted to be by the clam dip station), Mark is to search for Iris (the goddess of the rainbow and Hera and Zeus’s little daughter/pet), Lauren is collecting DNA samples, and Bo plans to greet their hostess Zeus.

Before Lauren and Bo go their separate ways, Bo tells the doctor that there’s always going to be reason why they shouldn’t be together and she doesn’t want to put off their relationship any longer. Tamsin’s earlier words that she and Lauren were always a couple even when they weren’t really must have struck a nerve. Speaking of the Valkyrie, she shows up at the party as well rocking a white back-revealing dress. Tamsin tells her that Dyson filled her in on “Operation Ancients Go History” and she’s game to play along, but obviously she’s still hurt and furious with Bo.

Bo manages to find Iris’s room where the two have a brief chat before Zeus/Zee enters the room. Zee waxes on about how she was Amun(Ra) in Egypt, Odin to the Vikings, Jupiter to the Romans and of course Zeus. She tells the succubus that she orchestrated this party to give Bo what she wants, emancipation from her father. You see it turns out that the glowing handprint on Bo’s neck is a direct link to Hades and whenever she’s fed, she’d also been sending energy to daddy dearest just like an umbilical cord.

Zee offers Bo and Trick the special, “Drink of Prophecy” which has Cassie and the other oracles’ eyeballs. EEWWW. Of course Bo is grossed out but Zee tells them to man up and just drink it so that they know she isn’t lying about the evil Hades will unleash. Sure enough, both Trick and his granddaughter witness the same vision of a park disintegrating into black nothingness. Zee promises that no one will get hurt if Bo agrees to do the ceremony, which she does naturally. At this point I feel like they should play The Emancipation of Mimi in the background.

Mark in the meantime finds Iris and the two decide to leave the party to get away from their parental units. Iris takes them to very nice empty house where the two fool around like typical rebellious teenagers. Except Iris is probably super old and I don’t really know how old Mark is. Things go downhill though soon after when would be shifter realizes that they are in the house of the family that Iris body snatched. He thinks its super messed up that they are there but Iris says its ok because Cee Cee (the original owner of her body) is still in her. Iris figures that she can take over Cee Cee’s life and be loved by real parents. Except it doesn’t work out that way because Cee Cee’s dad knows that it’s not really his daughter and that triggers Iris’s weird killing power. Mark sees the body on the floor with blood pooling into the triskele mark and he realizes that she’s been the one behind the murders. Poor Iris is super freaked out as well because Zee and Hera told her that those people were merely “sleeping” and that she was doing a good thing. Mark tells her to just get out of there and he’d take care of the body but he then gets stabbed by Cee Cee’s mom. That was first interesting thing the guy’s done yet.

Back at Olympus/the condo, Bo chooses a ceremonial rusty dagger that will be used to carve out the handprint from her chest when Tamsin and Lauren come rushing in having learned from Hera that Iris is actually stronger than the two ancients. Dyson then notices that his kid is gone too. Whoops! The gang goes off to find the kids while Tamsin stays behind. The two blondes have a moment on the balcony (where Cassie was thrown off fyi) and while Tamsin is about to cry, she gets lightning zapped. But don’t worry I don’t think she’s dead because her body is still there. Zee probably got tired of hearing her sob story.

Bo, Dyson, and Lauren head to a park where Bo first finds Iris. She tries to comfort the youngish ancient Fae since she understands what its like to hurt people without meaning to from not being able to control your abilities. But the succubus touches Iris’s face despite the girl’s angry warnings to stay away from her and Bo’s hand starts to turn black. Then part of the park becomes as dark as night, just like in her vision. Bo figures out that the darkness was because of Iris, not her father afterall.

She rushes back to The Dal to show Trick her hand and tell him how they interpreted the vision wrongly. Trick then consults some old books and discovers an entry on the Nyx, a primordial force of evil. Nyx was actually the Greek goddess of the night. Bo believes that Zee and Hera are using Iris as a time bomb with the power of Nyx within her. Trick pulls out another entry about a box made of adamantine that could contain something that evil. Well of course daddy’s gift becomes useful! 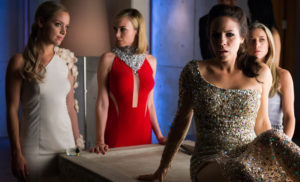 Back at the park, Dyson and Lauren find a bleeding Mark with Vex. Mark had apparently called Vex for help instead of his old man. Ouch. But also, I think Vex could use some love, even if it is from Mark. I bet Mark is gonna shift and then have his supernatural healing powers kick in soon. Though I would prefer if he didn’t make it. Is that terrible? Oh wells.

The succubus treks back to her house where Zee is there clutching the music box. They get into a fight but Bo comes out victorious thanks to her super strong black hand, which she uses to fling Zee out the door. The blonde begs Bo not to open the box, claiming that Hades will walk the earth if she does. Our heroine though finally has a breakthrough in her Oracle induced truth vision. We finally meet Hades and it’s Eric Roberts!!! He tells Bo not to be afraid and that there are far more terrible things out there than him. She’s still being angry and snarky but he continues saying, “You must stop them. Only family can destroy the ancients. Our power will decide the fate of this world. You will do things you don’t want to do. Lead our victory over night.” We can’t really blame her for the ‘tude since he keeps talking in riddles and going on about how that the answer lies with her.

The episode ends with Zee freaking out as Bo begins to wind the music box and is bathed in light when it opens. Could it really be the way for Hades to emerge from Tartarus? Is he truly as bad as he’s made out to be or is there some kind of crazy misunderstanding for his previously heinous acts? For all the torturing he did with Aoife, he seemed quite patient and calm in the brief conversation he had with his daughter. Though that could all be an act but Lost Girl certainly likes to keep us guessing. But I was expecting this super scary evil figure after all the build up from previous seasons.

I am bummed that Doccubus seems back on with Lauren telling Bo, “Oh boy” in the good way to Bo’s proposition un-pausing their relationship. But you know what, in the grand scheme of things Lauren is human and Bo and Dyson are not. So I can wait and will cling to the hope that Team Dyson does win in the end (even after the show is over!!!).

We’re halfway done through the final season and there needs to be an epic showdown at some point and everyone’s storylines wrapped up. Here’s hoping Kenzi makes a comeback before the series finale!