You’ve got to love a show that turns the table on gender stereotypes because this week’s Lost Girl totally flipped the tables on whom I thought the Fae gods were. We also find out that Evony has some unexpected ties to the ancient ones and I’ve been given some hope on the Bo/Dyson front.

The episode opens with the aftermath of an apocalyptic tornado. Bo, Dyson, and Tamsin are on the street aiding people and even here Tamsin is unable to contain her obvious attachment to the succubus, calling Bo her girl. This is not going to end well.

Meanwhile, blonde ancient Fae lady is at the balcony of her evil headquarters/condo and is super excited about the tornado while somehow the three oracles are all passed out on her couch (didn’t they just get rescued?). They all seem out of it but then the sky goes completely dark and the three women stand up and begin chanting, “Only in the darkness can we see the light.” From last week’s lightning shenanigans, we can assume that blondie is in fact a HE (in spirit) and is Zeus, god of the sky. So my Apollo/Artemis theory is null and void.

Bo, Dyson, and Tamsin head to Lauren’s lab update her on the craziness outside but things get even worse when the power shuts down. Bo volunteers to stay behind to help guard the area in case anyone comes to try to steal the serum. Lauren interjects that they’ve got bigger issues as there no longer is any power that will keep Evony’s super dangerous Fae in its prison. When the backup generator fails, the duo put the small case/prison box into one of the rooms and are surprised to see that it’s empty inside. Had Evony just tricked them? Sadly no. But more on that later. 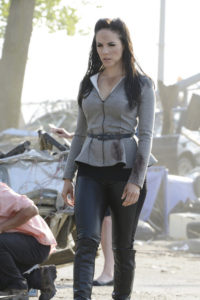 Lauren and Bo, who obviously still have feelings for each other decide to seize the moment and sleep together, only to be seen by Tamsin. Ouch. Dyson had warned her that it’s in Bo’s nature as a succubus to always have other partners. It really goes to show in my opinion how much Dyson really loves Bo because he’s let her go, understanding that he can’t force her to be with him and accepting her for what she is.

After their love session, the two ladies discover the dead body of yet another one of Lauren’s assistants. They really need to start writing high risk of a painful death in the job description. So Evony’s super powerful Fae was real after all and it’s invisible! We actually find out who it is because Evony herself enlists the help of Vex because apparently he had helped her trap it back in the day. The former Morrigan along with the Mesmer head to the lab in search of Lauren’s serum and to kill the unleashed Fae. Instead Evony ends up as bait and calls for Eros to come get her. In a moment of vulnerability, we find out that this ancient Fae had broken her heart by choosing Psyche instead, so she trapped him of course. Lauren throws an axe and it hits Eros’s back. Evony kisses him but a few seconds later a bolt of lightning disintegrates his form. For those not up to date on their Greek mythology, Eros is the son of Aphrodite and the god of love.

Let’s take a moment however to check in on Vex. Earlier in the episode, something really strange happens to him at The Dal. What might that be? Oh you know, Mark suddenly appeared in the wine cellar, came on really strong which resulted in lots of kissing and a very relaxed, albeit confused Vex in the aftermath. This was a little disturbing but funny as hell.

Dyson in the meantime has gone to check in on Heratio’s human wife at her house and finds the ancient fae there. The shifter plays along with Heratio, who eventually drops the act after Dyson calls him Zeus. He gets super pissed and says his name is Hera while releasing a swarm of flies from his mouth as he attempted to choke the human woman to death. She actually manages to stab Hera in the guts and the ancient Fae is forced to retreat since his/her vessel had been damaged. Yep did not see that coming.

Dyson takes poor Mrs. Heratio to his place since she feels unsafe given the circumstances. Bo then makes a sudden appearance and confesses to Dyson that she’s been thinking about him but that they just can’t be together right now. He says he understands and that they’re playing the same old game. She then says that maybe they should change the rules and the two kiss. Aww shucks you guys.

Trick then encounters his own weird moment when Isabeau appears and tells him that they are going to be together. The Blood King realizes that it isn’t actually real and the illusion vanishes, revealing the three oracles at The Dal with him instead. As he tells them to go away (they have amazing senses of direction for now being blind fyi), Vex, Dyson, and Mark all arrive. He asks them if anyone else has had any weird sexual encounters and the shifter and Mesmer both raise their hands. Trick then explains that the oracles are using them to extract a truth by giving them their heart’s desire. This news of course totally blindsides Vex because since when did he have a thing for Mark? They figure out that the thing they all had Bo’s blood in them and that she must be the light they are seeking, but what does that mean? 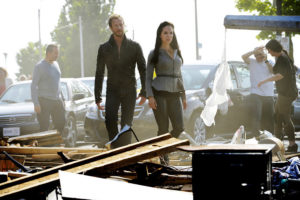 We shift to Bo whom the oracles have gotten into their clutches. They transform to Dyson and he tells her that she chose him first for a reason and that with everything they’ve gone through, their kind of love doesn’t go away. She agrees with him but asks him why now? Dyson then morphs to Lauren and responds that now is all they have. Just as they are about to kiss, Lauren vanishes and Hades’ voice is heard instead, imploring his daughter not to be afraid. Trick comes in and dispels the oracles and Bo finally tells him who her father is.

Back at the condo de Olympus, the oracles arrive and an impatient Zeus kisses Cassie to extract Bo’s truth from her. He/she gasps and says that the succubus has it and doesn’t even know it. Enigmatic much? Cassie then begs Zeus to let her go because she’s done everything asked of her. The ancient one says sure and then throws her off the balcony. Yikes, that is not a good way to go. Poor Cassie, not only did she have a crappy family and love life but she lost her eyes and was used as a pawn. She really got screwed over. 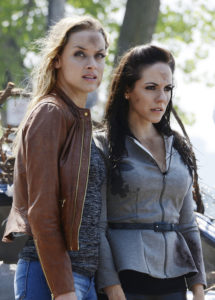 The episode ends with Tamsin getting her heart-broken as she confesses her love to Bo but gets friendzoned. She tells Bo that she accepts the fact that as a succubus there will be other partners but that she needs to hear that Bo’s heart belongs to her. Bo says that she loves her, just not in the same way. Tamsin doesn’t understand why Dyson, Lauren, and even Rainier are good enough but not her? Awww I just want to give Tam Tam a hug. She storms off to tend to her wounds leaving a sad Bo behind.

But at least we saw what Bo’s heart truly wanted, Dyson and Lauren. Both of these relationships are complicated and yet the doctor and the werewolf shifter had the time to accept the love triangle as it is since Bo loves them both. Still she saw Dyson FIRST. Just saying. Thank goodness that stint with Mark didn’t completely destroy everything.

So while we don’t know what exactly the ancient Faes are after, it seems that Bo has become their new target, which is hardly a surprise. Bo’s been the chosen one this whole time and though we know how powerful she is, what more does having Hades’s blood give her (aside from becoming Dark Bo)? Could Zeus and Hera need something within Bo to destroy Hades?

Hopefully we’ll find out more in next week’s episode!