Demigods everywhere rejoice! A live-action version of Percy Jackson and the Olympians is headed to Disney+ announced author Rick Riordan today on Twitter.

Riordan penned the five book series following the adventures of Percy Jackson, demigod son of Poseidon and his friends Annabeth Chase (demigod daughter of Athena) and satyr Grover Underwood. The first novel The Lightning Thief introduces us to the world of Greek gods and monsters set in modern times as Percy tries to clear his name after being accused of stealing Zeus’s master bolt.

The author has also written four other series that are all interconnected through various characters. Warning some minor SPOILERS AHEAD:

Disney-Hyperion also gave him his own imprint under Rick Riordan Presents that highlights mythologies and cultures from around the world. My personal favorite is the Aru Shah series by Roshani Chokshi.

Previously there were two feature films that adapted the first and second books: Percy Jackson and the Olympians: The Lightning Thief  (2010) and Percy Jackson: Sea of Monsters (2013). Logan Lerman and Alexandra Daddario starred as Percy and Annabeth. Fan response to the films have been mixed but Riordan assures his audience that he will be heavily involved in the upcoming Disney+ series and it will closely follow the storylines from the source material. 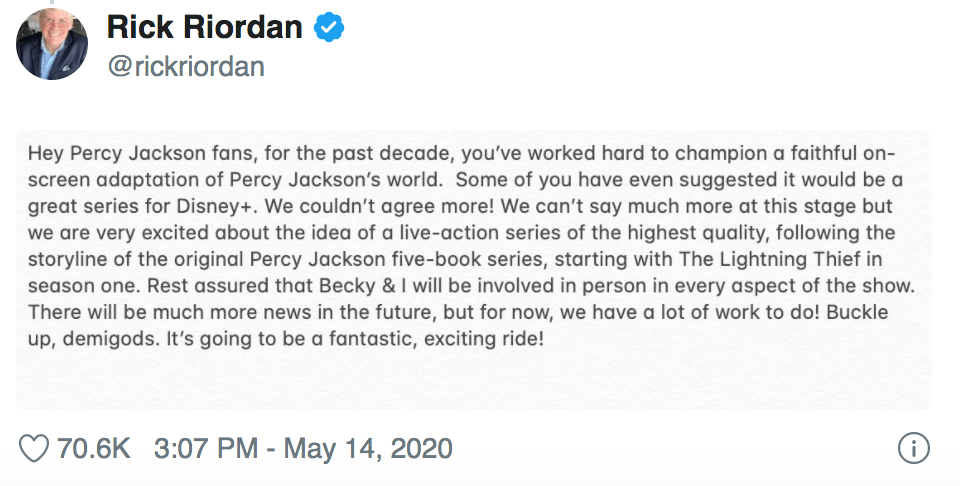 With so many titles under his belt, this certainly opens the possibility for more novels to be adapted in the future. But in the meantime as we wait for more news, check out the books! Or re-read them, I know I will be!

Previous article
What We Do In The Shadows episode 2.06 Recap – Jackie et Jim
Next article
‘Harley Quinn’ Season 2 Episode 7 Review & Recap: There’s No Place to Go But Down