Just when we thought we knew what was happening in Killjoys, a new plot twist takes place that makes us question who is the real enemy? In this week’s episode, audiences discovered that Aneela (Hannah John-Kamen), Dutch’s doppelganger and Khlyen’s daughter, is not the all-powerful Hullen leader we all thought she was.

On the Hullen armada, the Commander and Delle Seyah (Mayko Nguyen) have been getting super close and we first see them in bed together after sex. Looks like Seyah Kendry has really made the moves on Aneela though the later isn’t up for cuddling or another round, she’s eager to get to her lab. All this human physical activity has gotten her science mojo flowing and she has a new idea on what to do with blood sample collected from D’Avin that’s making her re-think her Red 17 experiments.

We learned last season from Khlyen (Rob Stewart) that many years ago, their people came to Arkyn on a scientific mission to grow more food for their starving population. The plants they were cultivating seemed to thrive off the plasma and some folks on his team (including his daughter) ate the fruits. Once bonded with a human host, the plasma became sentient and their meat sacks became the Hullen. In the early days though the pairing was imperfect and so some like Khlyen retained his own mind but others like Aneela were completely taken over and driven insane. From what we’ve seen of her so far in season 3, she seems to have an almost childlike way of approaching situations, which must have been her way of coping through the Hullen transformation. 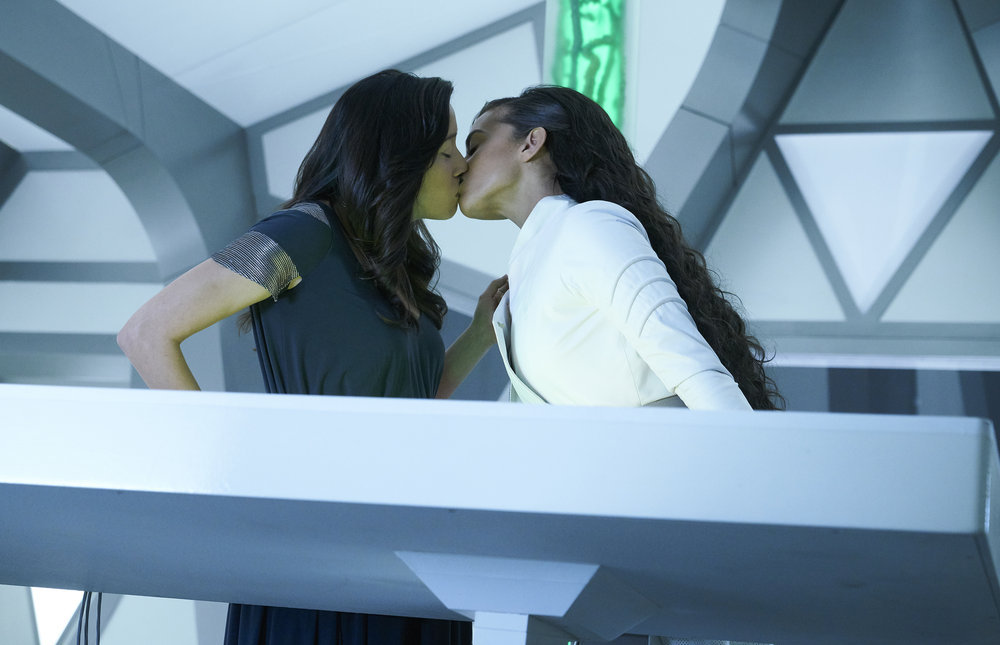 We next see Aneela in her lab, busily working on an experiment that seems to yield positive results. Gander (Ted Atherton) and her attendant view her remotely through a monitor. The male Hullen says that this is good progress and it seems that they might not need the Commander anymore. He brings guards to Aneela’s chambers where Delle Seyah is still in bed and has them escort her to an unknown location. When the Commander emerges from the lab, she discovers that the ship seems to be completely empty. This freaks her out big time and she commands everyone to return. Without any response she rushes back to her room thinking Delle Seyah is still there, but alas she too is missing. Aneela starts to have a panic attack saying, “No no no no not again,” as she collapses to the floor in near tears. She then begins to hear someone whisper her name and she goes into the plasma tub.

Meanwhile, the former member of the Nine is thoroughly confused and aggravated, saying that Aneela’s going to be pissed at this but then Gander asks her to think about the situation. Delle Seyah finally gets it that they aren’t on Aneela’s ship, this is the other woman’s prison. She asks the Hullen man why they control her and pretend to obey her if she’s actually being held captive. He explains that they don’t actually control her they simply watch and learn from her. Gander then gives her a brief Hullen history lesson: they’ve existed for thousands of years across species and confirms that the power structure goes way beyond Aneela. Khlyen’s daughter’s ability with the green is unlike anything they’ve ever seen before and that’s why they have been so patient with her. However when the RACs exploded it was a last straw and now with her recent scientific breakthrough they may not require her at this juncture. Gander then orders his men to take Seyah Kendry to treatment. He says that this will be either the future or her death, but he’s fine either way.

Inside the plasma bath, Aneela’s mind is transported to a memory where she is on a beach and her hair is completely blonde. She approaches a man who’s back is turned to her and when they meet it’s a much younger Khlyen (yay Rob Stewart!!). She greets him as papa saying, “You’re still here.” Aneela begins to say that she found a way to save everyone and that there’s something about Jaqobis’s blood that fights the green and pushes through. This has been what’s missing from her experiments, but before she can finish she hears someone calling for her. This seems to snap the Commander into realizing that the person standing before her is not her father. He comments that he’s been going through her memories and some of it is missing. Aneela then turns to him and says that he knows exactly why and that she knows who he is.

Back on the ship, we find out that it’s her attendant who’s come to wake her up, disagreeing with what Gander was doing. Moments later Aneela does regain consciousness as the other woman is being taken away by Hullen goons. The Commander whispers die and the two men collapse with a surprised Gander turning around. She is looking fierce and super duper pissed. Aneela has similar plasma whispering skills as D’Av as she levitates Gander from the ground asking him where Delle Seyah is. As she Force chokes him he gets out, “You don’t know what you’re doing.” Her attendant then explains that whatever she found in the lab is why they took Kendry but that she doesn’t know where. Aneela then goes on a rampage killing every other Hullen she comes across while screaming, “Where is she?!?”

In the last scene of the episode Delle Seyah is shown in another chamber, her head hooked to green tubes and very much pregnant. She opens her eyes blankly in the final frame.

So the Hullen have been using Aneela for her scientific mind in what I’m assuming has to do with their species evolution in some form. She truly is Khlyen’s daughter. I sympathize with her character though because she is just being used and will be tossed away once she’s served her purpose. I’m guessing that possibly the Hullen have not been able to procreate as a species which is why they need to inhabit other life forms and then assimilate them into the collective Hullen mind. Is Delle Seyah’s pregnancy this first step into future Hullen babies? Seems like it. The mystery behind Aneela and D’Av’s similar abilities with the green continues to be intriguing. Perhaps the Commander’s human blood had similar properties as the elder Jaqobis brother that made her reject part of the Hullen transformation resulting in her insanity.

This was a crazy episode and I was not expecting Aneela to be a prisoner. Kudos to the Killjoys team for this juicy plot twist! I can’t wait to find out more about her character and her connection to Dutch.