Dominion Spells the End of the Jurassic Park Franchise, But Things End on a High Note

I wasn’t originally planning on reviewing the new Jurassic World movie. Even though I grew up with Jurassic Park, I wasn’t sure what to expect from the final entry in the long running series. But then I found a free moment to go watch Jurassic World: Dominion, and I actually really enjoyed it. So here’s my musings on the film, and some reasons why I feel you should all go watch the movie. 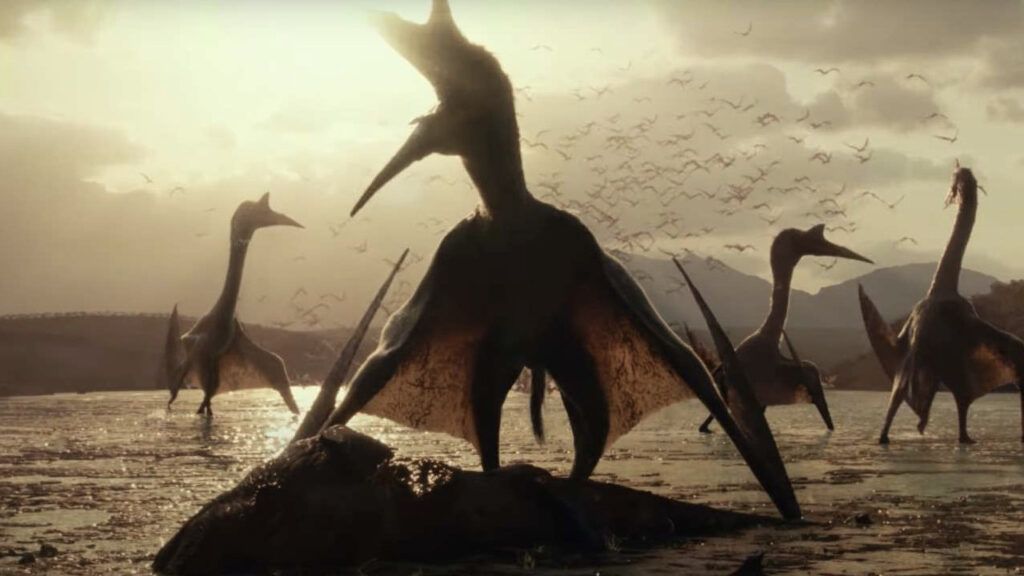 One thing that I clearly remember from the original Jurassic Park was the overwhelming sense of wonder. Not only because of the graphics, but just the fascinating science fiction concept brought to marvelous life. Sure, the series is about violent dinosaur mayhem, but it’s also about watching humans connect with a previously extinct species. And as a gigantic fan of science fiction and fantasy stories, that’s a key facet that not all of the Jurassic films has remembered to focus on. Thankfully, Jurassic World: Dominion manages to incorporate moments of wonder amidst moments of pure terror.

Pratt’s Owen and Howard’s Claire finally got past all their sexual tension and are living together off the grid in a remote cabin. The only factor getting in the way of Owen constantly showing off his “dinosaur handling moves” is the fact they also have living with them a teenage girl. Yes, Maisie from the last film is essentially their adoptive daughter, her complex genetic heritage aside. They’re doing their best to not only protect Maisie from those that would exploit her but also raising her as their child. Which is admirable, but there’s only so much you can do to wrangle a teenager.

Luckily, Owen is still a badass, and he’s much better at wrangling dinosaurs than humans. In the aftermath of Fallen Kingdom, dinosaurs are roaming freely, and it’s complicated the global ecosystem. Not as much as I might have expected, but enough that the news is regularly covering dinosaur attacks. One factor that has aided in calming the situation is a new company called Biosyn. They’re taking dinosaurs to a compound and letting them be wild, while using their genetics to develop new technologies. And as any fan of sci-fi should suspect, they’re up to no good.

To my surprise, Dominion brings in the returning cast members pretty quickly. At first, they’re on a side track, but they seamlessly manage to weave them together. Ellie discovers gigantic locusts with spliced prehistoric genes, and then realizes that the only crops they’re not devouring are those developed by Biosyn. This leads to her reconnecting with Alan Grant and getting an invite to Biosyn from their new resident philosopher, one Ian Malcom played by the fantastic Jeff Goldblum. 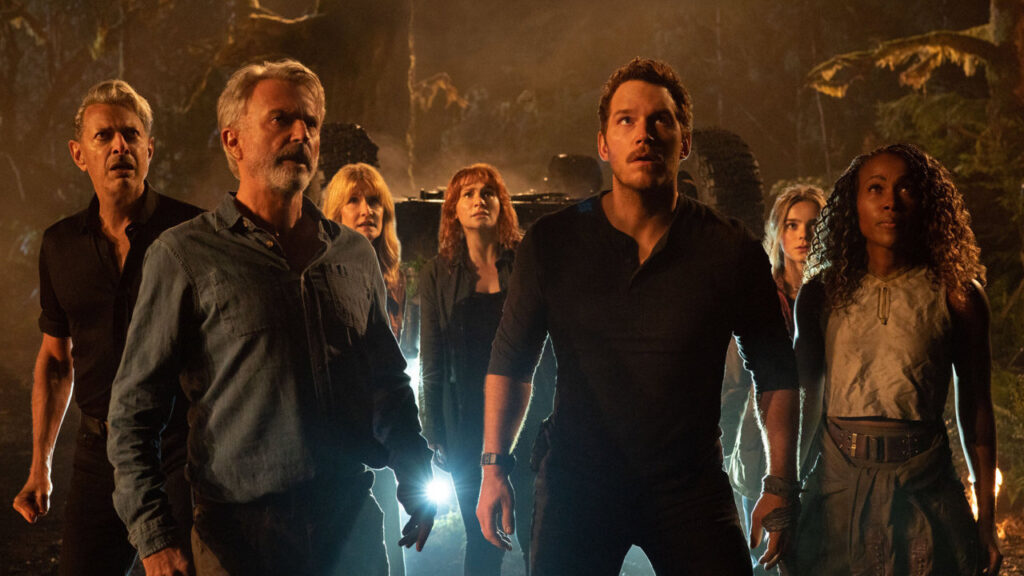 Meanwhile, Maisie and Blue’s infant velociraptor, nicknamed Beta, both get kidnapped and brought to Biosyn. This draws in Owen and Claire, but first they have a bit of a Bourne sequence. They go with Barry to Malta to intercept the kidnappers, and things get out of hand. There’s a criminal mastermind named Santos, played well by Dichen Lachman, and she not only traffics in dinosaurs, but also in humans. Worse, she found a way to command a nasty breed of raptor, and aim them at specific targets. Which leads to the scene you’ve probably seen in commercials several times, but rest assured, the entire thing is much better than you can imagine. There’s lots of fights, extended chase scenes and it’s also where they introduce another great new character named Kayla. She’s a pilot that has been working on shady, underground dealings, but when she sees Maisie being forced into a car her conscience starts to flare up. 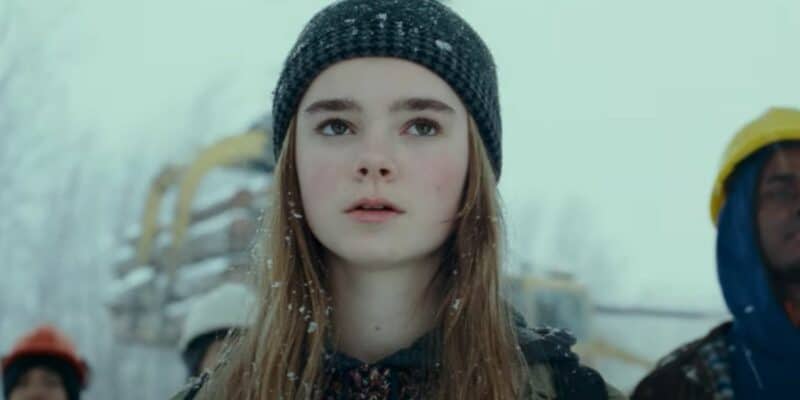 My only real complaint with the movie is when Alan and Ellie are at Biosyn, trying to find proof of the company’s hand in modifying the locusts, when the movie throws a curveball. Earlier it was very directly implied that Biosyn was developing the locusts for the sole purpose of controlling the global food supply, but then they intimate that it was an accident that they’re trying desperately to fix. Those two ideas cannot coexist, and I really wish the earlier implication had borne out. Luckily, the one thing that remains from that idea is that of a dangerous corporate billionaire. The head of Biosyn is like the love child of Zuckerberg, Jobs and Musk, and while he seems awkward and boring at first, he’s nevertheless devious and utterly lacking in scruples.

By far one of my favorite parts of the movie, especially the Biosyn segment, is when they introduce Ian Malcom. I’ve never seen Goldblum more extra, and it was amazing. He has slicked back hair, his trademark glasses and a leather jacket. Better yet, it’s clear many of his students are hot for teacher, which is all sorts of hilarious. Fret not, though, because he’s not just a comic foil in Jurassic Park: Dominion. Most of the time he is, but he also has a brief action movie moment that justifies those lusty looks he was getting in class. 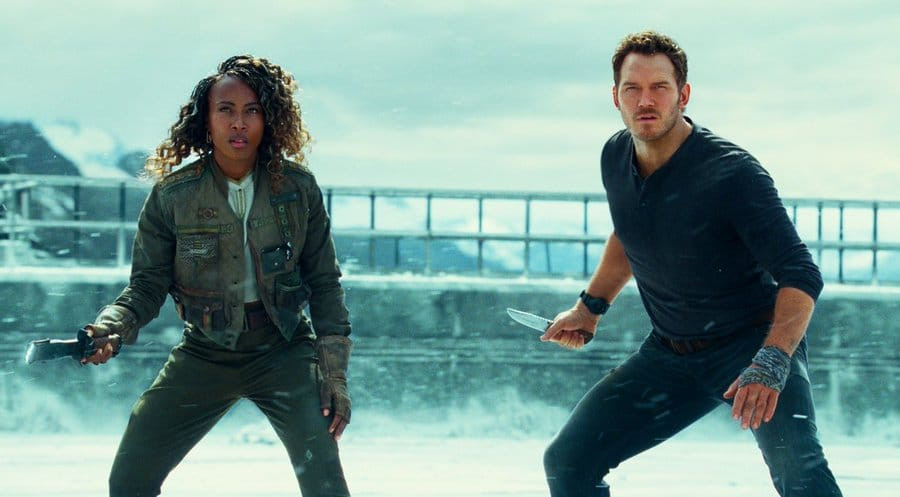 I won’t ruin all the big moments of the movie, but rest assured there’s tons of amazing action sequences and memorable dinosaurs. Honestly I think Dominion has the most dinosaur species of any of the movies, but the ones that really stayed with me were the avian-themed creatures. There’s one that looks like a gigantic bird mixed with a sloth, and it’s utterly terrifying. Not least of all because it’s actively hunting Claire. They also throw in a dino larger than T-Rex, a Giganotosaurus. It’s closer to Godzilla than a T-Rex, and one day if we’re really unlucky they’ll start popping up in Florida’s contaminated waters. But as far as the movie goes, it was a great apex predator. 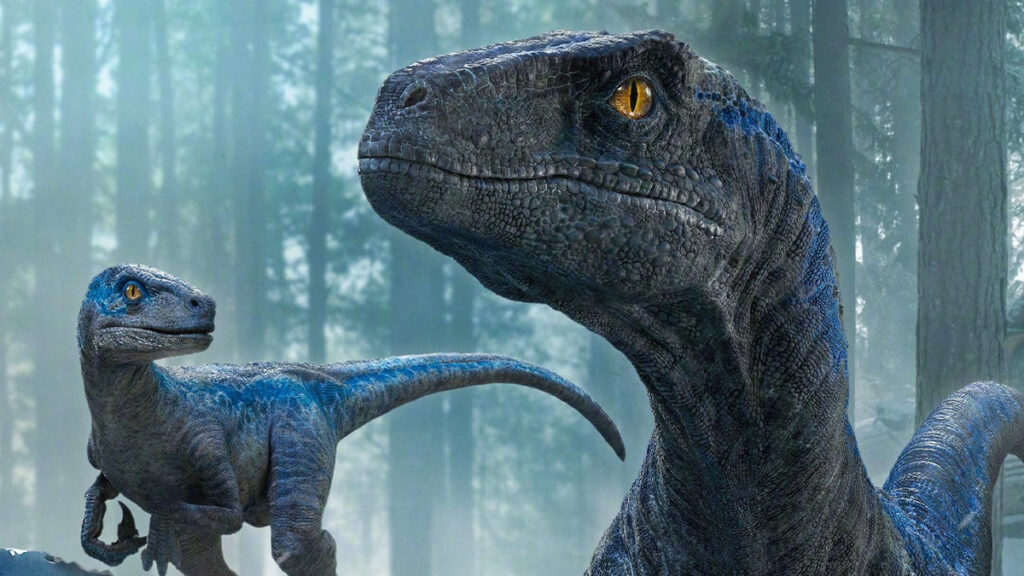 Also, there’s a TON of raptors in Dominion. Blue gets lots of screen time early on, but they then introduce what feels like at least 2 new raptor species, including one that dives under icy waters to chomp on Owen and Kayla. While part of me may have wanted more gigantic predators, there’s no lack of diversity here. Even the flying species are powerful and fierce, and it’s clear to me an Earth full of dinosaurs is one where it’s not safe to live. At least not as a human.

Jurassic Park: Dominion is full of emotional moments and I personally loved seeing how they brought the old and new cast members together, especially the completely new characters. It’s hard to believe that this is the last movie in a series that’s been around since 1993. But at least it was able to go out with a bang, as I feel this is the best movie since the original. If you’re a fan of the Jurassic movies or just enjoy sci-fi mayhem, I’d see this one on the big screen. 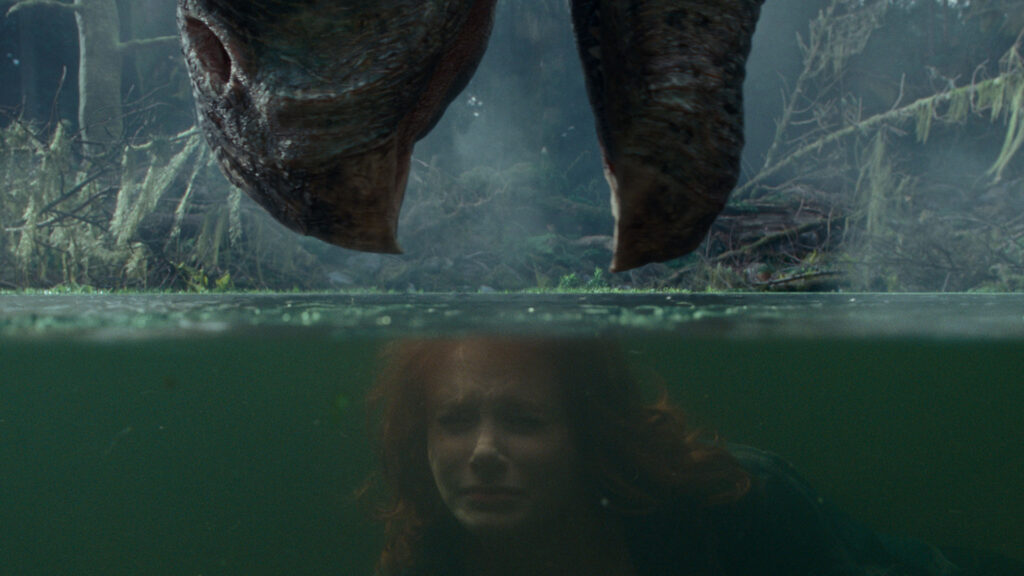