‘Jessica Jones’ Season 2 Episode 1 Review: AKA Start at the Beginning

A review of the first episode of Jessica Jones Season 2

Jessica Jones returns for its second season and it is as evocative as ever with Krysten Ritter reprising her role as the hard-hitting, super strength sleuth that can never seem to stay out of trouble. Though the premiere episode starts slow, the first episode shows promise of a dark and hard-boiled drama reminiscent of season one. This time around Jessica Jones is focused on the mysterious organization IGH, and how it’s related to the mysterious origins of Jessica’s powers.

The series picks up about a year after the events of the first season. Jessica is back to being her self-destructive self: drinking excessively, engaging in meaningless sex, and taking on meaningless cases. She’s returned to work as a gritty, private investigator after her tiny stint with The Defenders, still trying to move on from the traumatic conclusion of season one (And maybe the Defenders). 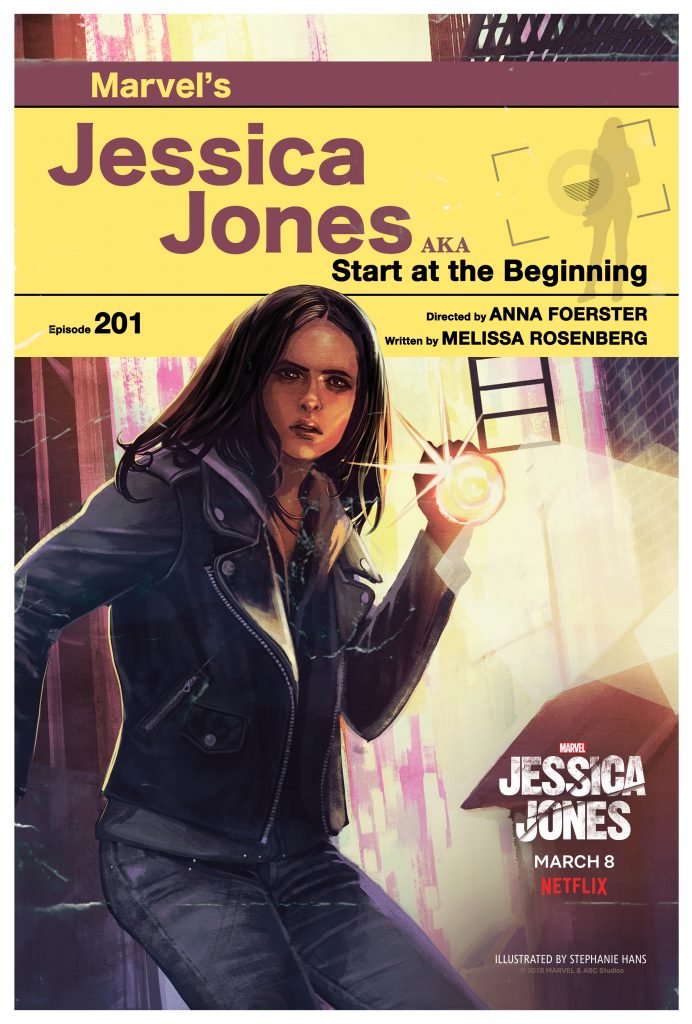 Meanwhile, Trish has shifted the focus of her talk show: Trish Talk, to focus mainly on topics about people with special abilities. She begins doing a bit of investigative work herself, looking into IGH, the organization responsible for what happened to her ex-boyfriend, Will Simpson, in season one and possibly the organization responsible for Jessica’s innate abilities. She’s also in a seemingly happy relationship with the famous reporter Griffin Sinclair (played by Hal Ozsan).

Jeri Hogarth has an interesting arc. In the aftermath of season one, she’s having stressful PR problems at her law firm. It cultivates with apparent hostilities between Jeri and her law firm partners, with a potential story arc that seems promising, depending on how tastefully its executed.

Malcolm has stepped up as Jessica’s number two at Alias investigations, though Jessica still won’t recognize him yet.

We also get some new original characters as well with Oscar Arocho (played by J.R. Ramirez) as Jessica’s new landlord who happens to be a single father and Pryce Cheng (Played by Terry Chen), as Jessica’s P.I. competition. (On a sidenote, just for my own sanity. Do these names not sound like Oscar Eight ‘A.K.A. Oscar Myer Weiners’ and Price Change? Did the writers come up with these names at a grocery store?)

Like any good Marvel series, there are references to previous incidents set in the Marvel Universe. Including Netflix’s somewhat disappointing team-up series: The Defenders. There is also a brilliantly funny bit referencing a character from the Golden Age of Marvel comics. And though the scenes are quick, it is very difficult to miss.

Jessica Jones has never been shy about standing up about women’s issues. According to the NY Times, much of Season 2 had been written during the turmoil of the Trump and Hilary election. Just as last season was a narrative about openly discussing and overcoming abuse, this season of the series was in many ways, inspired by confronting the improper ways that men treat women in this country.

Befitting, given that the series released on international women’s day. What mostly stands out about this season is how much of an empowering step forward it is for women in the industry.

At a time of importance for the #MeToo movement and fully acknowledging the recent outlash about some of the underrepresentation of women in Hollywood, the series goes quite in the opposite direction. With each episode, this season is directed by a different female director in a series starring, written, and run by, mostly women.

In a Netflix featured commentary, Jessica Jones series showrunner, Melissa Rosenberg had this to say about her series:

“Because we have so many women as department heads, directors and writers, it has normalized it… I was very cognizant on our first episode of a woman being at the head of the table at the production meeting. And then right around the time we got to episode three or four, it just became a very normal thing.” says Rosenberg.

That said, episode one shows a lot of promise, a couple laughs, and an intriguing start. While it doesn’t exactly dazzle, it drops us back right into Jessica’s world and leaves with the promise of more.