This week on iZombie, Liv gets a new look and I will never be able to look at Ravi the same way ever again.

I think I should just let Liv explain where we left off last week:

Ravi: “Where have you been? I had to do all the county paperwork by myself!”
Liv: “Just tracking Harley Johns to his secret outhouse bunker, realizing he turned into a zombie. Then subduing him, stashing him in a freezer.”
Ravi: “Ah, well…. I did the paperwork.”

Ravi breaks the news to Liv that her zombie-ed out mug is on the front page of a newspaper accompanied with a full article about zombies existence and ways to identify them. Suffice to say, Liv is freaking out, as she is now Seattle’s Poster Girl for Zombies. The next morning Liv continues to express her concerns to Peyton, but Peyton assures her that no one will think that monster on the front page is actually Liv, even though it is indeed a picture of Liv.

Peyton and Liv’s morning bestie routine causes Liv to be late to work which in this case is good because Rachel is at the morgue to “apologize” to Ravi about the article while simultaneously harassing him for more zombie information. He tries to get rid of Rachel, in fear of her recognizing Liv when she arrives, but he has nothing to worry about here. In addition to bringing Ravi his triple full fat chai latte with light foam and extra cinnamon (which Liv refers to as “a triple candy ass latte”) she has also brought a new look: She dyed and tanned. Well actually she caked a shit ton of make-up on her face and wore a blonde wig, but it does the trick all the same. 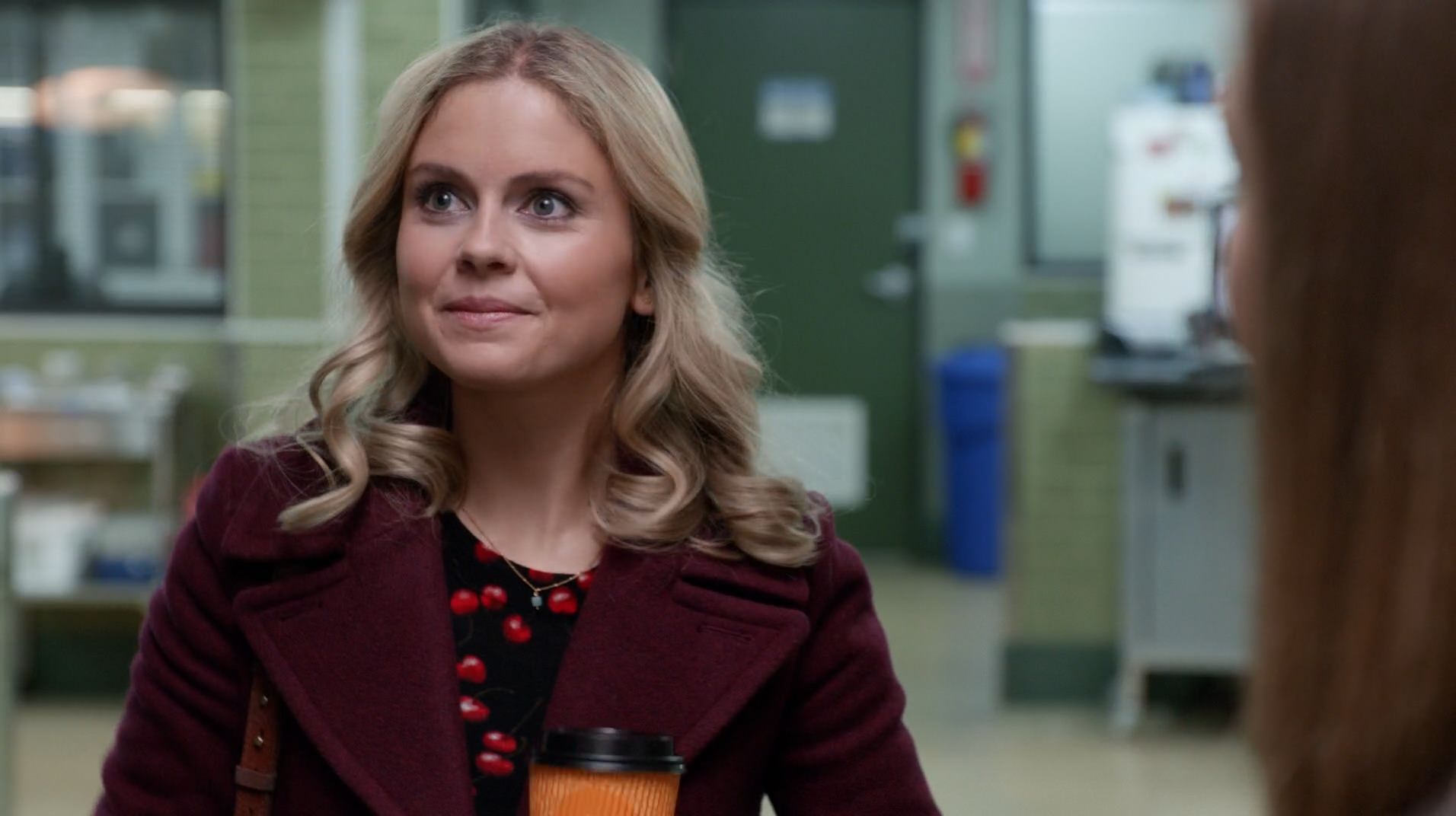 Crime of the Week:

Victim: Katty Kupps (CDC Epidemiologist/Ravi’s former boss who he banged half a second after confessing his love to Peyton). Cause of Death: Blunt trauma to the noggin.

Katty had been in Seattle to investigate several cases of Aleutian Flu that have popped up in the area. Kupps’ role in the investigation was to interview first class passengers from the Paris to Seattle flight where they believe the outbreak occurred. While the CDC is deeming this a “potential outbreak,” the fact that a similar rash of cases have not been reported in Paris coupled with the fact that the virus had been essentially eradicated years ago leads Ravi to believe this is actually a case of bioterrorism.

Liv is very resistant to eating Katty’s brain because having a vision of Ravi having sex is absolutely the last thing she ever wants to see. But, for the good of her city, Liv makes the sacrifice, and chows down some Microwave KattyKuppcakes. 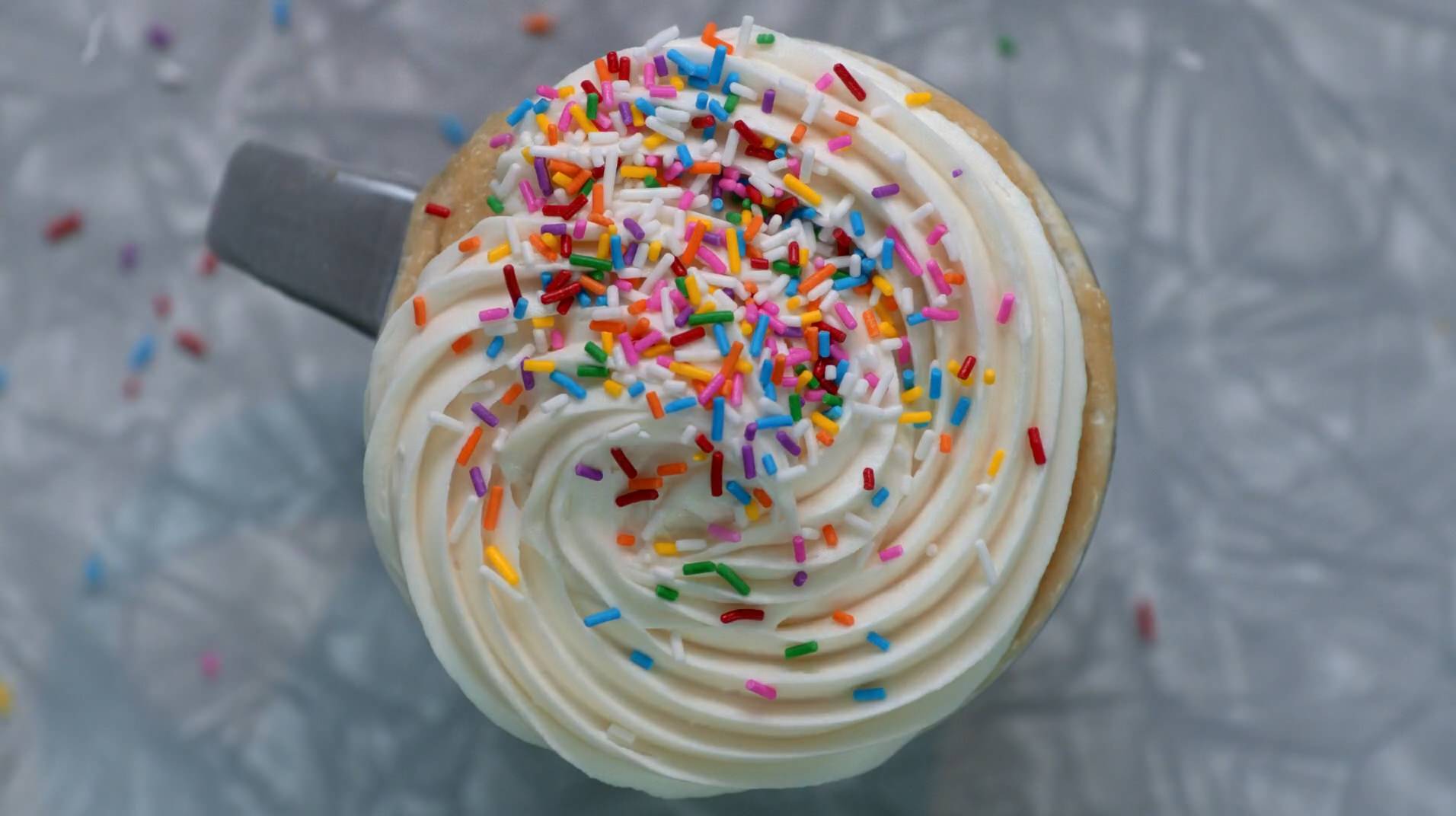 Her worst nightmares are quickly confirmed when Ravi drops a pen during an interrogation and she has a flash of Ravi going down on Kupps. Then, ugh I am cringing thinking about this let alone having to describe it, she has a vision of Ravi in bed screaming out “Dead Kittens, Winston Churchill eating fried chicken, flatulent Jabba the Hut.” I have no words for this because I have no idea what is happening right here and I don’t ever, EVER find out.

Liv continues her investigation into Ms. Kupps death by frequenting the hotel bar where Katty was staying. Initially, her visits were work related, but she starts to find herself unable to leave the bar and is subsequently confused and frustrated at her constant desire to pick up men. Night after night she stays at the bar until last call chatting up a handsome lad and it takes every ounce of willpower for her to stop herself from sleeping with these men. That is until Chase shows up.

Before I get into the Chase/Liv part, I’ll quickly discuss the Justin and Liv. After Liv’s second almost brush with a one-night stand, Liv invites Justin to her apartment so they can DTR where Justin says “of course” they are exclusive and Liv just goes with it.

Okay back to Chase and Liv! Even though Liv is supposed to be accompanying Justin to Major’s farewell party, she is yet again drawn back to the hotel bar. Who does she happen to run into at the bar? That is right, one Mr. Chase Graves! The two grab some drinks and try to guess the sexual fantasies of all of the surrounding couple. Eventually, this leads to Chase and Liv revealing their deepest sexual fantasies to each other. First up is Chase: there is this desk in his hotel room, right up again a window, and all he wants to do is to bang someone on it. Second is Liv: we actually only get to hear that it begins with her being naked because next thing you know Liv is up in Chase’s room on that very lucky desk.

I have not been shy about my desire for Chase and Liv to get together. After their first interaction, that lasted maybe a minute, I was already trying to come up with Shipper names. And I have to say, the build up didn’t disappoint. I do feel bad that Liv cheated on Justin, but I just wanted these two together so badly! Also, I have seen the argument that this was just Katty’s brain that caused Liv to sleep with Chase but I disagree. Obviously, I am biased, but there was always a sexual chemistry between these two, and they were bound to sleep with each other sooner or later. 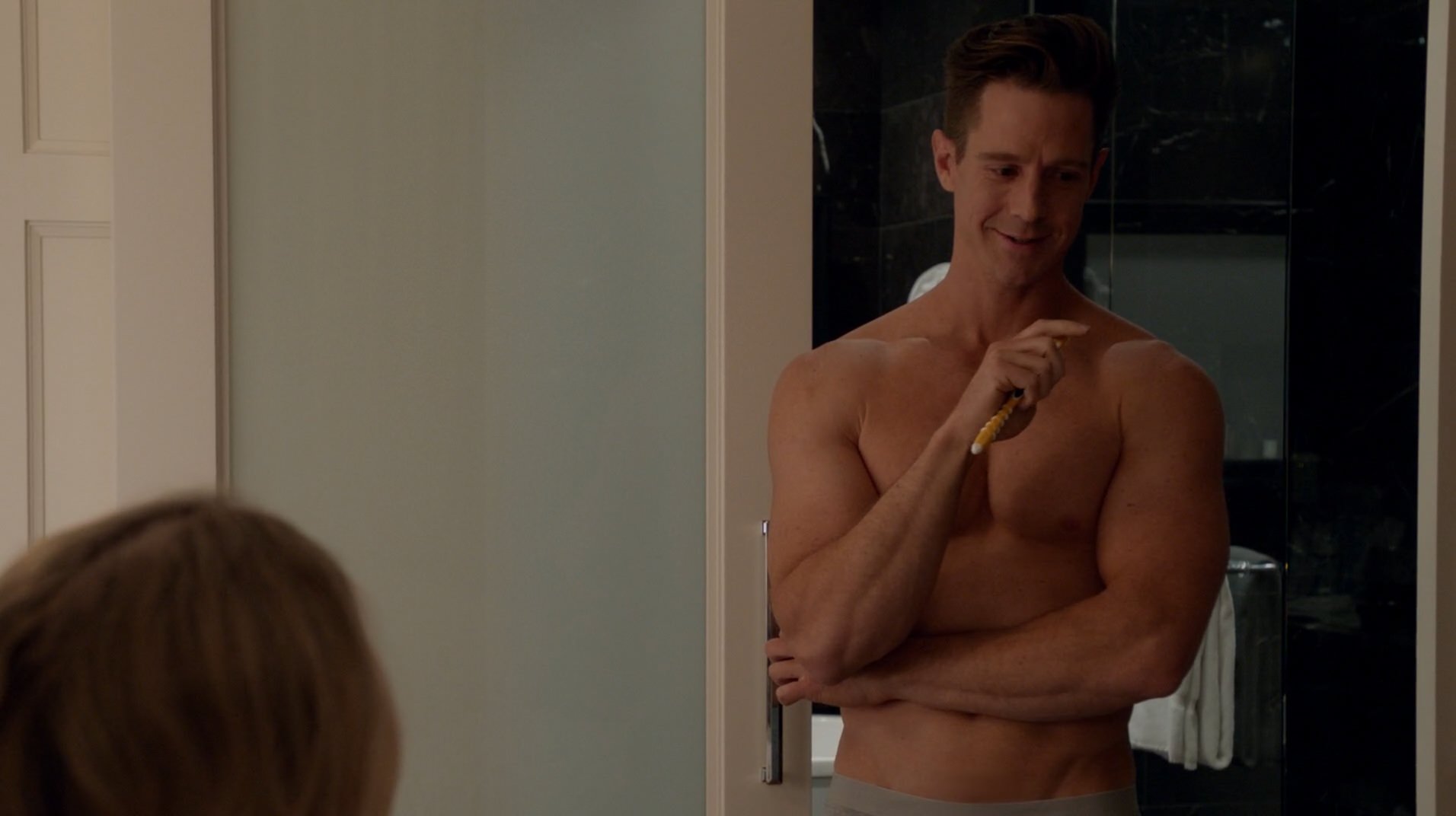 Chase goes to the bathroom to freshen up after the pair’s passionate physical activities. He introduces Liv to his little pup who was locked in the bathroom while they were in the throes of passion and invites her to stay for brain tubes and room service. Awwww, I think Chase wants a relationship! Look at his smile! He is so adorable! While Chase is chatting it up though, she finds a napkin on his nightstand with Katty’s name and her room number. 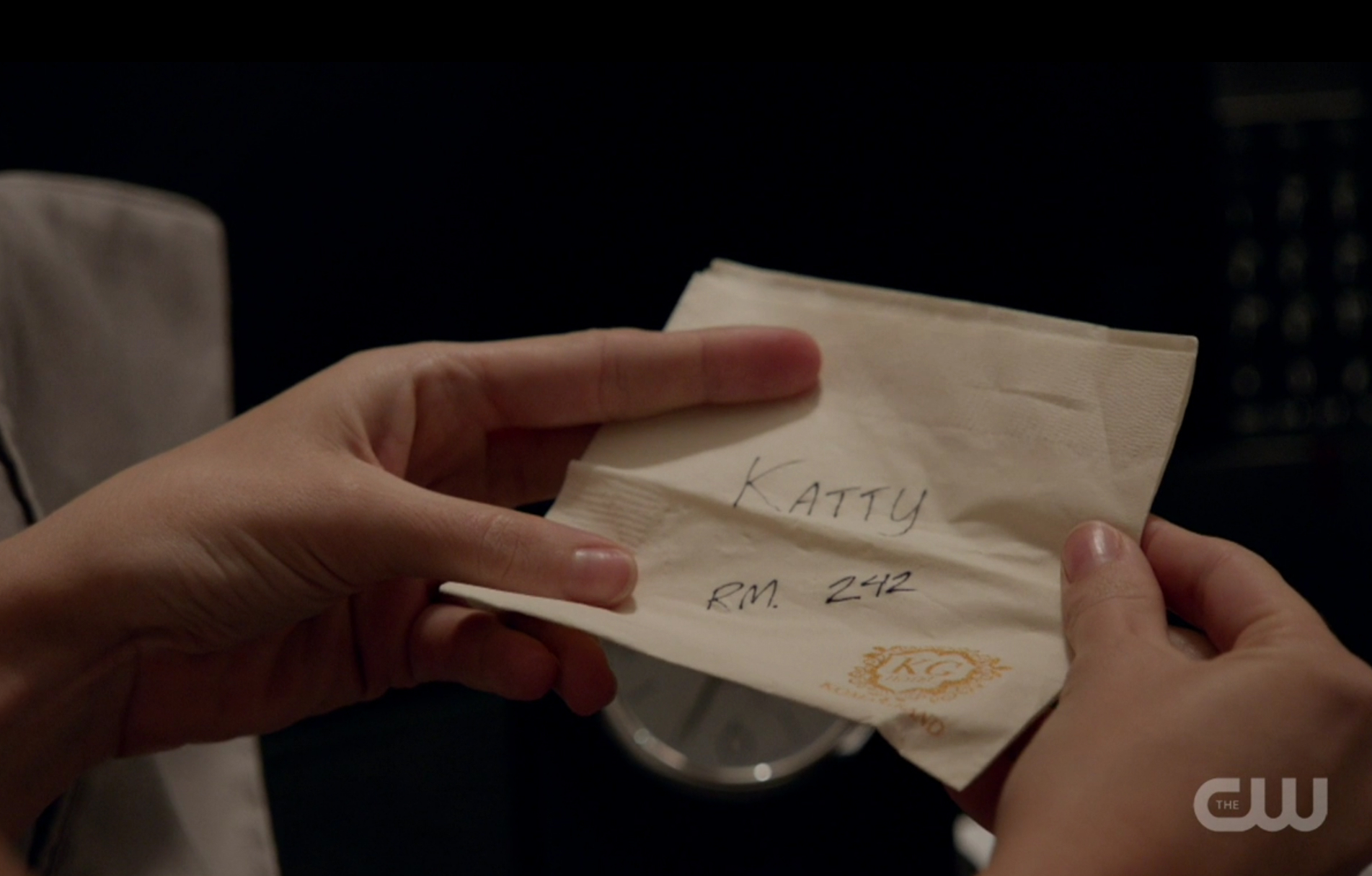 Chase calls Major to his office so share some yummy brain tubes with him which Major reluctantly takes a little nibble of. But Major isn’t there to share a meal with the boss. The reason Chase called him to his office is to discuss Shawna’s Tumblr which includes this lovely piece of art:

Sex Tent: a haiku
We built a sex tent
We did it in the sex tent
Then we did it some more

Shawna’s inability to write a proper haiku isn’t Chase’s problem with the Tumblr though. His issue is that the site clearly demonstrates that Major had sex with a human, and that human did not turn into a zombie…. ergo Major isn’t a zombie and Chase needs to let him go. Since FG is really the only family that Major has now, he pleads with Chase to give him a second chance. He is willing to do anything to stay: work as a desk jockey, a janitor, anything. But Chase says no, and I don’t blame him. Major put people’s lives at risk. He is the reason that a video of Justin zombie-ing out was posted on YouTube. Major should have just told the truth from the beginning. I know that this would have meant revealing to FG about the zombie cure, but it had already been stolen, so there doesn’t seem to be too much harm there. 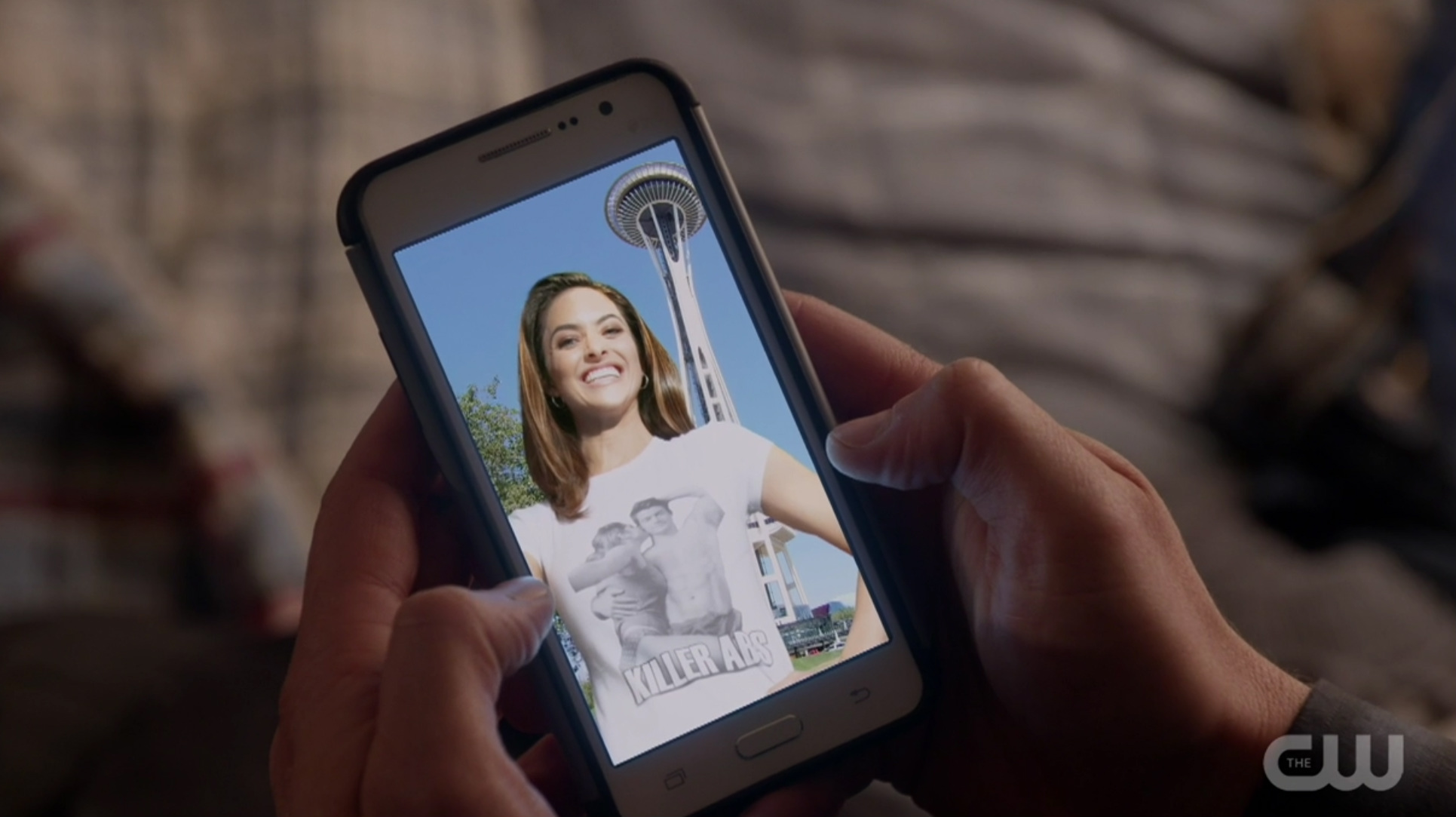 The party is all good and fun until Harley, the brand new hot mess zombie, arrives with a vest full of explosives and blows up the party. Major is outside comforting Justin over his Liv woes at the time of the explosion, but Natalie isn’t as lucky. Since she is no longer a zombie, I think it is safe to assume that she died in the blast.

So first, I called the Carey Gold involvement and the fact that Baracus is not involved at all. I love being right. I am not sure how right I am though because there are still so many aspects of everything that are unclear. First, what is this Aleutian Flu. I saw some speculation that the Aleutian Flu is the zombie virus, but I really don’t think this is the case. I have to admit I don’t remember if they mentioned the flu or why Katty Kupps was in Seattle when she first appeared in the second episode. The flu is almost always an airborne virus, and the zombie virus is not. Also, I am assuming that not all of the Aleutian Flu patients are dead. You would think, especially after reading the article about zombies, that Katty would have connected the key signs of being a zombie to the symptoms of the Aleutian Flu if they were indeed the same. This flu thing and its connection to FG and Carey Gold is a complete mystery to me confused even further by Chase.

The presence of Katty’s room number scribbled on a napkin creates a clear connection between Chase and Katty. The question is, was it just innocent flirting at the bar as Katty was known to do, or did Chase obtain this information with nefarious intent. Chase did not sleep with Katty, because if he did she would be a zombie. Just, please, I really hope Chase isn’t that big bad. Please, please, Please. I also think it is weird that the stolen Zombie Cure still has not been addressed.