For all of you ankle-biters and squares, the terms “Googie” and “Mid-Century Modern” may seem as alien as turning on the tube with your physical phalanges (I kid you not, a time existed when you had to get up to turn on the TV). Styles and trends come and go. But aesthetic movements, such as those from the 1940s through the 1960s, stay locked in stasis as if encased in clear lucite… 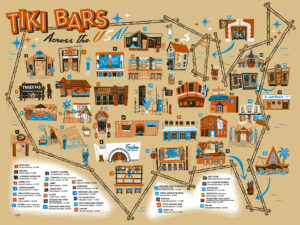 …With unabashed angles, bombastic starbursts, and sumptuous flashes of the forgotten crayon box hues, obdurately and devilishly in defiance of a bygone era. It was a time of experimentation in concordance with sophistication. Reflected in everything from architecture and fashion to graphic design and building a better living. Call it Space Age, call it Post-War. Call it whatever you’d like. Just don’t call it late for that noon cocktail.

Ian Glaubinger imbues all of these with a perspicacious sense of pop culture as well as the timelessness of every piece. What ensues is a bit of a get-to-know with the artist at Garden State Comic Fest 2022

RK: The moment I entered this Con, I was stricken with your work. Where did your love for art start?

Ian Glaubinger: I’ve been drawing my whole life. I came from a family of artists, so, growing up, I was in a house for art was cultivated. So my mother, my father, my sister, all artists.

IG: So, whatever, you know, was fostered. And I just knew, growing up, I always wanted to do something with drawing and with illustration and it kind of changed and pivoted as time went on. It started at a very early age like Looney Tunes was what affected me the most-

RK: Chuck Jones and all-

IG: Chuck Jones, Max Fleisher, Betty Boop, and UPA cartoons and Hanna-Barbera, like it, stuck with me- I just went from there.

RK: You say, like the first things you wanted to draw was like anything Looney Tunes related as a point of reference or-

IG: Looney Tunes, Ninja Turtles, dinosaurs, things like that. That was my go-to.

RK: Dinosaurs—always cool! I don’t think I’ve met one person throughout my childhood, where, “Dinosaurs? I don’t care much for them.”

IG: Well, not to get dicey, but some very religious folks may not agree with you.

RK: That’s true! There you go folks, your hot take for the day!

IG: Yeah, yeah, they’re not real. They’re witchcraft and they were put there by evildoers.

RK: I would say that would make for an even more compelling story! As if the story weren’t enough! Where did your affinity, because you have a very specific aesthetic to your style, a mid-century aesthetic, where did that spring from?

IG: I’ve always been drawn towards the retro, anything old. It’s evolved over time, but I guess it really stemmed from things like Hanna-Barbera and UPA cartoons and Max Fleischer and that style, and as I’ve gotten older, I’ve gravitated towards that even more. My style’s gone from more of the Marvel way to a simpler way to more of Hanna-Barbera way where [this piece of art] is of this from Iron Man to Endgame.

RK: Which is SO COOL. I have to ask, more a personal thing. When you draw, music or no music?

RK: Is there any particular type to get you in the zone or whatever is on the playlist?

IG: It could be whatever’s on the playlist. I won’t lie and if there was a specific property that I was working on, I’m drawing superheroes, so I’m putting on Hans Zimmer or any of the soundtracks he’s done. I was just doing a piece for Parks and Rec, so I threw Parks and Rec on in the background. It could be related to what I’m drawing or not.

RK: As a screenwriter, I can fully agree with you on the scores as well as whatever’s on in the background. Having seen your body of work, you’ve done some stuff, for Nickelodeon, for example?

IG: Sixty-five to seventy-five percent of my work is licensed. I do work for the studios like Nickelodeon in print and in apparel, and it’s a lot of fun. Most recently, I’ve done something called “Tiki Toons” which was a lot of fun, a lot of characters I got to draw.

RK: What was your first commercial job, the one where you were like “Wow! I get to work for this company?”

IG: I did some sort of stuff, absolutely licensed for a gallery show in LA and it wasn’t like I got paid by the company, but the gallery was sanctioned by the studio, so I had done a Ghostbusters show, but the first official one in 2012 was a licensed screenprint for Lucas Film.

IG: It was a series of five posters I’d done. It was the “G.P.S.” series I’d done—the Galactic Park Services-

IG: They were like travel posters based on locations in the Original Trilogy. It was a huge deal for me in that and I remember when I was working with a client through a third party who worked directly through Lucasfilm, calling me to let me know that my poster was approved and after I hung up, I got a little teary-eyed. 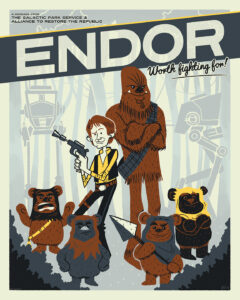 RK: Oh, I could imagine.

IG: I’m a grown man, that gets to draw cartoons for Star Wars. That is the dream I will never get off of.

RK: Your artwork is phenomenal and it brings me back to a bygone era that I’ve never lived in, but always have longed to. Dana Snyder (Voice of Master Shake) actually adores this stuff, so I’ll try to get him onto this-

IG: Uh, he knows. We follow each other online. I sent him a Florida poster- 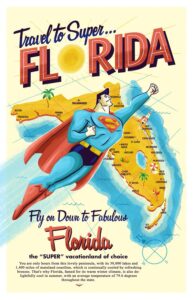 IG: It was for a convention in Florida and Dana Snyder saw it and I sent him one of these and we have a back and forth now.

RK: That’s amazing and I’m going to say, please check Ian out. Do you have any departing words for any upstart artists or—I don’t want to put you on the spot, but-

IG: I mean this whole interview was putting me on the spot! (laughs) But yeah. Just DRAW. Don’t worry about the trends and it’s hard to say don’t worry about the likes, because, you put it out there for likes, but likes don’t mean dollars. Just keep drawing. Put everything there out online, but make sure you have a presence online. Make sure you’re not just doing the art because to do this for a living because you need two halves. You need to do the art, but also have to maintain the business side to it. Be professional. Respond to e-mails. Make yourself into a brand.

RK: The work that sometimes others don’t realize is that part people don’t-

IG: You can’t just draw a picture of something and go “I hope I’m famous now!” You gotta put in a lot of work.

RK: And that is sage advice for anybody creatively. Brand yourself.

The Garden State Comic Fest had a lot to offer, but I found a local artist that ticked off all of the boxes for something different. His art is slick. It is badass. It is circled to what made graphic design great in a Post-War time, continuing on the tradition in modern times.

In this era of so many things being assailed at us, whether it is technology, readiness, this shit is a breath of fresh air…

…Even if it’s radioactive. Search that term up. In the 1950s, it was known as hip. Also, search Ian up, you won’t regret it.