Last week, I was optimistic about Homeland. With six episodes remaining, there was still plenty of time to salvage the season. Sure, there have been some bad episodes in the mix, but the premise was there. The characters were…sometimes there. Repeatedly I defended Carrie Mathison and her behavior, claiming that she is a flawed, unreliable narrator, and that made her interesting.

But after the seventh episode, “Redux,” I can’t defend her or even the rest of the characters any longer.

Homeland seems intent on swimming with the fishes. With Brody gone at the end of the third season, everyone (I took a poll)  hoped that Homeland would return focus to the CIA, politics, undercover work, spying, and all those bits that once made the show great. Instead, Carrie received another unlikely romantic partner. Sigh. Alright. “Recruiting.” Whatever. Then last week, the poor kid ate dirt, and lo! There was hope once more! (Sorry, Aayan.)

Except now we’re back to the “psychotic” Carrie episodes. Why, oh, why do the writers insist on destroying Carrie this way? Remember when she was fierce and a bit off-kilter but still loyal and insanely intelligent? WE LOVED THAT CARRIE. Sure, the bipolar episodes threw a wrench into the mix, but after last season’s hearing about her mental state, it seemed the door had been closed on that particular issue. But okay, say we do revisit Carrie’s mental health–I can understand that, it’s always a battle–and say, Dennis Boyd, that sniveling weasel whom I love to hate does manage to switch her pills. That’s fine! Except Carrie KNEW something was wrong. We all know Carrie’s stubborn, but dammit, she isn’t stupid. Instead of the hallucinations, her mind should have deduced she’d been drugged and then she and Quinn could have searched for that pesky mole. It’s not like she just became bipolar and doesn’t understand how it works with her personality. SHE KNOWS. HER FATHER HAS THE DISORDER.

An aside: do you think the writers were being cheeky by titling the episode, “Redux?” Are they toying with us?

After pew-pewing her kidnappers, Carrie is then whisked away to a generic torture cell and then again to a mansion that I’m going to guess is not owned by Oprah. Because that girl needs some Oprah right about now and she’s never gonna get what she needs. Look, I understood Carrie’s feelings for Brody in the first season. I didn’t care for their relationship after that because it never felt genuine to me, but hey, I can appreciate it for what it was. And then Brody died. Except last night, I thought I was almost as crazy as Carrie. Wait. COULD he be back? How did he die again? Could he have survived a hanging? Was this entire season a lie and did Brody never die? And then the camera pans out and we realize she’s in the arms of the I.S.I. agent, Khan, and in Carrie’s fragile mental state, she is still grieving for Brody . Something I imagine she never did. Toying with my sanity is not cool, Showtime. I wasn’t scared that I might actually be crazy, but more afraid that Homeland is just crazy enough to bring Brody back. (DO NOT.) 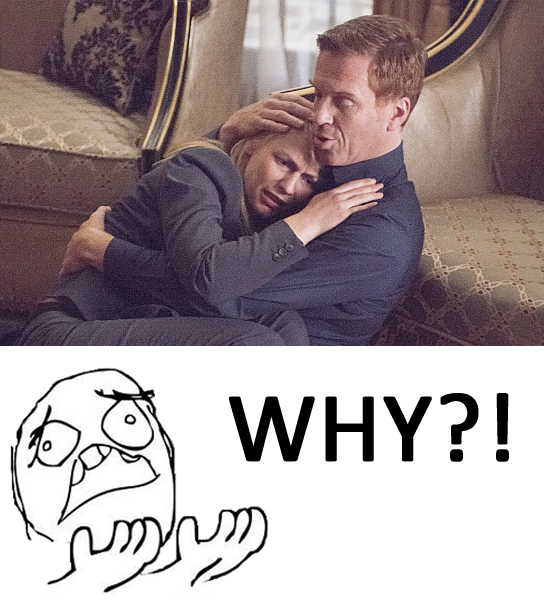 I appreciate letting Carrie grieve. After Brody, Sandy Bachman, leaving Frannie, watching Aayan’s death, and then Saul’s capture, there is no sane way for Carrie to feel even close to normal. But you know what you don’t need to get that across? Drugs. Hallucinations. BRODY. Bringing Brody back was a gimmick and nothing more. It was meant to shock and draw in more viewers because they know the show is floundering.

But it’s not just Carrie who’s having issues lately. For the first three seasons, Saul was the glue that held the show together. Even in its worst state, Saul was there to reel in Carrie and Brody and all the absurd plotlines and remind them, “Hey, this is supposed to be a spy show. Stop having cabin sex and pissing off Brody’s family.” And now, it’s like Saul was never in the CIA. It’s like he never threw Carrie in a mental institution for the sake of mission and understands how the game works. (Still bitter about that, Saul.) Saul Berenson waltzed into that airport bathroom to do…what? Apprehend Ghazi himself? Sorry, Saul. Quinn, you are not.

ALRIGHT FINE. He didn’t want to lose the lead. One mistake. Except last night he was like a deer on the highway, zig-zagging in front of cars that just want to slam on the gas and push him aside. Was he trying to get killed? It didn’t look that way with all his confused stares and sullen pleas of “I’m not important!” (Brody storyline 2.0?) If Saul wants to live then why, oh why, is he slapping around the cobra? You’re at the dinner table of a man who fully admitted to using you as a meat shield, after watching him unflinchingly murder his own nephew, and you blame him for 9/11? That’s not ballsy, Saul. It’s just asinine.

I can’t believe I’m going to say this, but the best part of the episode was CIA director, Andrew Lockhart, if only because he’s been the most consistent character thus far. (Listening to Dennis Boyd, A PROFESSOR, struggle to count to ten was also pretty hilarious.) Lockhart is a master of the Douchebag Technique, and fortunately for Ambassador Martha Boyd, I think his threat about taking away foreign aid worked. But we’ll have to see next week how things pan out. Maybe he’ll go on a hallucination trip and see Brody as well. At this point, anything could happen on Homeland. And that’s not a good thing.

Previous article
‘The Theory of Everything’ is…well…Everything
Next article
Review: A friggin’ awful ‘Christmas’