‘Heroes Reborn’: Who is Nathan and Malina’s Biological Father?

At the end of the last episode of Heroes Reborn, we are left with a new mystery after Malina and Nathan (Tommy) save the world through the sacrifice of their grandfather, Noah Bennet. The twins are living their lives separately with Nathan back in Carbondale while Malina was in Odessa attending high school at Union Wells.

As Nathan and his girlfriend Emily are at the ice cream parlor, a trench coat wearing patron gets ups and leaves, having drunk a strawberry milkshake. When the master of time and space comes to clean the table, he sees that a tarot card had been left behind. The scene cuts to Malina going to her locker at school and she finds another tarot card there as well. Confused, the teenage girl goes outside and gets inside a Mercedes Benz that has come to pick her up. Seated in the car, her great-grandmother asks her how her first day was. Malina gives Angela the card and tells her that someone left it for her and that she felt like she was being watched.

The older woman looks at her great-grandchild in dismay and says that her father is coming for her and Nathan and that no one will be able to protect them from him.

But who is this mysterious trench coat wearing father? Turns out he is a new character from the Heroes ebook Save the Cheerleader, Destroy the World.

His name is never revealed, but Claire calls him Hammer and they first met on June 5, 2012. Her life had changed after revealing her abilities to the world on December 7, 2010, but it had only become more dangerous. Eventually Claire had to go into hiding and she would meet the future father of the twins.

Peter and Claude had rescued Hammer and several others Evos from being lynched in Monaco and had taken them to a barge that was then docked in Tarragona, Spain. Even then he was already wearing his trench coat. Hammer had been badly injured and Mohinder feared that he would never walk again. Apparently Claire had been the first person he saw after regaining consciousness and they grew close during their time on the barge. The duo had their first kiss on July 4, 2012.

Still, things weren’t perfect between the couple and Hammer had become moody and felt that the others needed to be more proactive. He began to fight with Peter, Claude, Mohinder and Micah. Then one day he disappeared without a word to anyone.

Sometime after on September 27, 2013 he came back into Claire’s life while she was hiding in Italy at the Abbazia di San Giovanni in Spilimbergo. He missed his “Blondie” and had explained that things in the outside were getting intense and that he wanted a break from it all by seeing the only person that could make him smile. The two consummate their relationship but the next day Hammer vanishes again. Within that week, Claire begins to feel nauseous and realizes that she’s pregnant.

On June 13, 2014 when she arrives at the summit in Odessa, Claire scratches her hand and notices that she’s not healing. Soon after her water breaks and she is rushed to the hospital to give birth. The events after that was explored in Heroes Reborn.

So we don’t know what Hammer’s real name is or what kind of powers he has. Nathan (Tommy) inherited the Petrelli ability of power absorption (great grandfather Arthur possessed it, great uncle Peter had ability replication/mimicry) and Malina’s elemental control could have come from her maternal grandmother, Meredith Gordon’s line (who was pyrokinetic) or possibly from her father. Still, we do know he likes strawberry milkshakes, trench coats, tarot cards, and that likely he has some nefarious plans in mind for the twins and humanity.

While Herores Reborn was not renewed for a second season, this little nugget does leave fans of the series wanting more. And also how did Angela Petrelli get younger again?

Nicole is the Features Editor for The Workprint. She may or may not be addicted to coffee, audiobooks, and sci-fi.
@niixc
Previous ‘Legends of Tomorrow’ is pulpy fun, but tries too hard in series premiere
Next ‘The X-Files’ Review: We Are All Alex Jones 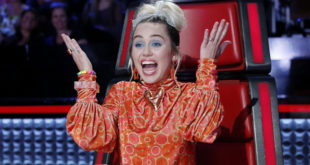 Miley Cyrus’s “Feminist” Song Selection on ‘The Voice’ is Questionable