Five-0 deals with some guy who keeps leaving empty briefcases with cryptic clues before blowing up the actual target real good. Yep. We’re somewhat back to basics here. With the silly “Pirates of Waikiki” episode thankfully behind us, Hawaii Five-0 gives us the usual formula: car chases, glowering guest star villains and a bunch of explosions. Did I mention explosions? Lots of those this week. That’s because the antagonist is one of those “mad bombers” we’ve come to know and love from years of television and film. I’ve got nothing against this trope. It makes for good entertainment. If done right, it’s metal as f**k. If done wrong, you have a bunch of explosions with law enforcement running from one bomb site to the next.

“Ashes to Ashes” presents the mad bomber trope as a middle ground between those two and gives us a small twist. As McGarrett weighs a marriage proposal and Kono out of action, helping Adam to physically recover from his shooting last week at the hands of the evil Gabriel Waincroft, the bomber leaves a clue for Five-0 in the form a flash drive. What’s on it? Some psycho’s Final Cut Pro thesis, showing photos tinged with CGI fire and a creepy voice, reciting a “Ladybug, Ladybug”. What’s the bomber want? He has an affinity for imprisoned serial arsonist Jason Duclair (Randy Couture) who, if you don’t remember, we met last season in “Nanahu”. The bomber idolizes Duclair and threatens another big bang if Duclair doesn’t see the light of day. 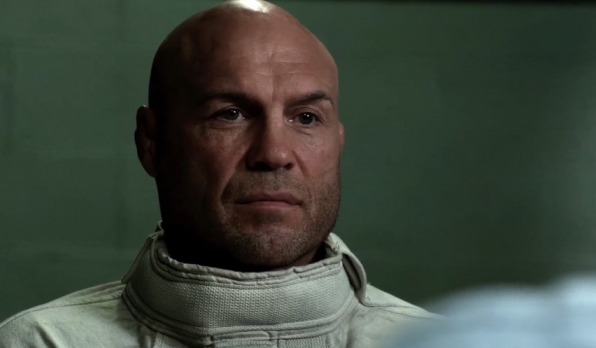 Of course, McGarrett and company comply with this, putting Duclair face-to-face with a severely warped individual named “Andre Trout” (further proof Hawaii Five-0 needs some help naming some of one-time players), who’s basically an anorexic Francis Dollarhyde and walks around with a tank of gas on his back so he can light everything (including Duclair for some reason) on fire. For all its fire and gunshots, however, the final third of this is where we find the episode (and the show) at it’s most compelling: Duclair has escaped certain death at the hands of Trout — but he’s hurt, bleeding badly from his right leg. Without medical attention, he’s screwed.

Does he know somebody on the outside or use some sort of inner-prison knowledge who can help him? He could probably do that — but Duclair’s a victim of his own sickness, a “tortured soul” as he tells McGarrett. Whereas Trout killed for attention, Duclair set fires and murdered because it was an integral part of his soul. The problem Duclair faces now is that he can’t escape his overwhelming thoughts of committing horrible acts of violence. They’re too loud — and the only way he can stop them is by being alone. “In a way, It’s ironic,” he tells McGarrett. “Freedom is my prison.” So, he eats one last good meal — a steak dinner with a glass of wine at a fancy restaurant — and gives McGarrett the key to a post office box. What McGarrett finds is shocking, yet fitting. His latest murder victim is wrong in every sense of moralistic judgement — yet, it’s justifiable. It works.

Up until then, “Ashes to Ashes” is Hawaii Five-0 on auto-pilot. It’s the television equivalent of Instant Ramen where the showrunners simply add water (or, in this case, a mad bomber) to cook it and serve it up hot to the average viewer who isn’t tuning in to playoff baseball for a nice, easy, uncomplicated Friday night view. This, of course, is not without a certain caveat: the episode could be perceived as an incredibly lazy venture. In the background, once again, is the whole ordeal with Kono, Adam and the Yakuza (though we do get a shocking twist dealing with the latter that really ratchets up the potential for heavy bloodshed in the future) as well as the whole “marriage proposal” storyline with McGarrett and Catherine, who has been so under-used, it’s criminal and unforgivable.

That second storyline does give us a cute little exchange between Danny and McGarrett, however:

“Speaking of ‘caving’…what happened? Did you just bail on the proposal?”

“Yeah! Secure the ring, I recon the location, I just gotta execute.”

“Wow! I mean, it’s just, it sounds so romantic the way you say it, you know? I mean, I can see it now: you and Catherine in matching camouflage cargo pants, on some very exotic shooting range and you get down on one knee and you say, ‘Babe, I want you to join my unit for a life-long mission!'”

It’s moments like this that we watch this show for — even when the rest of it is just a big bowl of noodle soup.

@theworkprint
Follow
Previous article“Dancing With the Stars” Review: TV Night Brings Muppets and Mayhem
Next articleRanking the Best of Bond: The Bond Girls