We take a look at the reintroduction of the Caped Crusader in this spin-off episode of Harley Quinn. Podcast, Review (spoiler-free), and recap below. 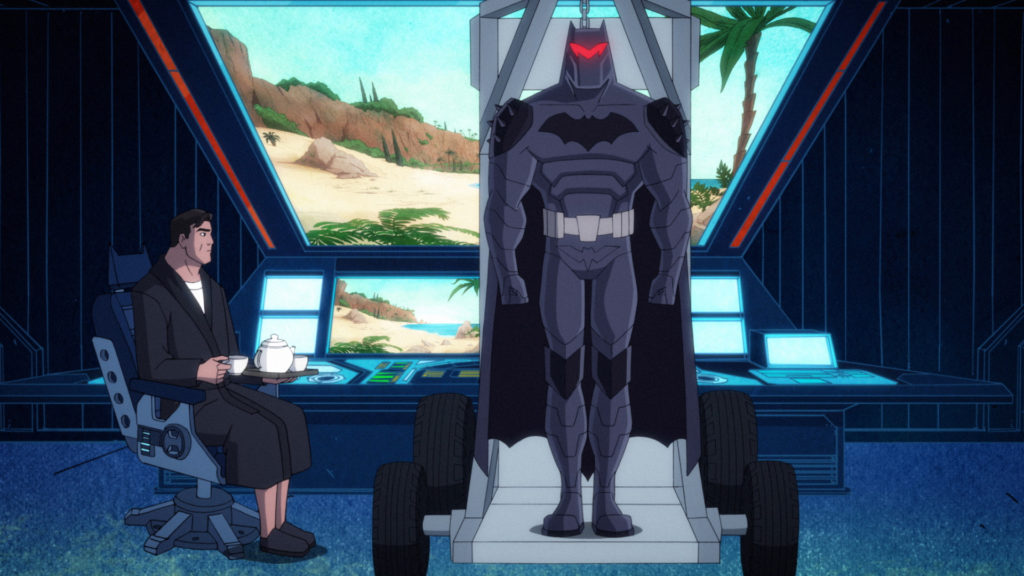 Batman Returns! In this Batman focused spin-off, we get to know Bruce Wayne/Batman in full detail, as we laugh at one of the more childish yet obsessive characterizations of Batman to date in a character study that’s more ‘Lego Batman’ than ‘Dark Knight Returns’ (though there are references to both in this episode).

We also see Alfred get parental on a less-than-cooperative Bruce Wayne, exploring their dynamic. Bruce, dealing with his feelings, attempts to stalwart himself and become his ‘Man of Steel’ in this episode.

A side-story breather type of episode meant to delve into the world of New New Gotham; characters converge, and plotlines begin to come together. This includes a focus on how the Injustice League is dwindling, as both Two-Face and Bane are all that remains — meaning something different must be done if the villains are to continue.

Overall, ‘Batman’s Back, Man’ brings to light some established threads while delivering some much-beloved side character screen time. My only negative critique (if you can even call it that) was that there is little-at-stake for Harley and crew, as they are not featured really at all in this episode. 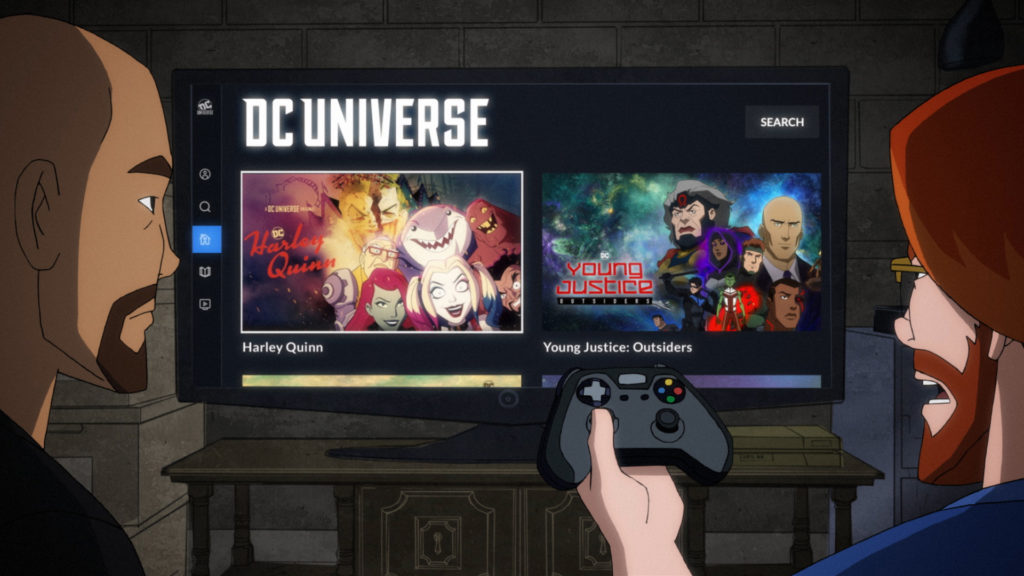 We open in on a sighing mouth-breathing fanboy wearing a ‘Release the Snyder Cut’ T-shirt. He trashes talks Harley Quinn for its ‘Heavy-Handed Female Empowerment’ themes, and after bashing on the episode to his friend —  who seemingly enjoys the show — they read the byline for this week’s episode:

“Batman wakes up from his Coma and is ready to retake Gotham City.”

Enthused, they take back everything they said and start the show. Cue Intro.

We begin with Bruce (Diedrich Bader) waking up in his bed at Wayne Manor. He stumbles forward and sees how well the city is doing, only to realize, it’s a painting. The city is in ruins.

Alfred offers Bruce pigs in a blanket and honey tea, but Bruce refuses because Gotham needs Batman! Alfred asks him to rest, even offering to be TV Binge buddies! Bruce refuses this too. They call Commissioner Gordon, who comes over to visit Bruce (not Batman) to fill him in and request a list of budgetary needs to retake Gotham: Police Officers and a cock-piece that opens up fires a tiny missile.

Stupified, Alfred tells Gordon that Wayne won’t bankroll him, though Bruce wants to know where are the other heroes? Gordon shows him Gotham’s only two vigilantes:

We meet ‘The Macaroni’, a dandy themed superhero in 18th-century attire and gigantic powdered wig. We also officially meet Batgirl for the first time, who’s posting her crime-fighting escapades on social media. 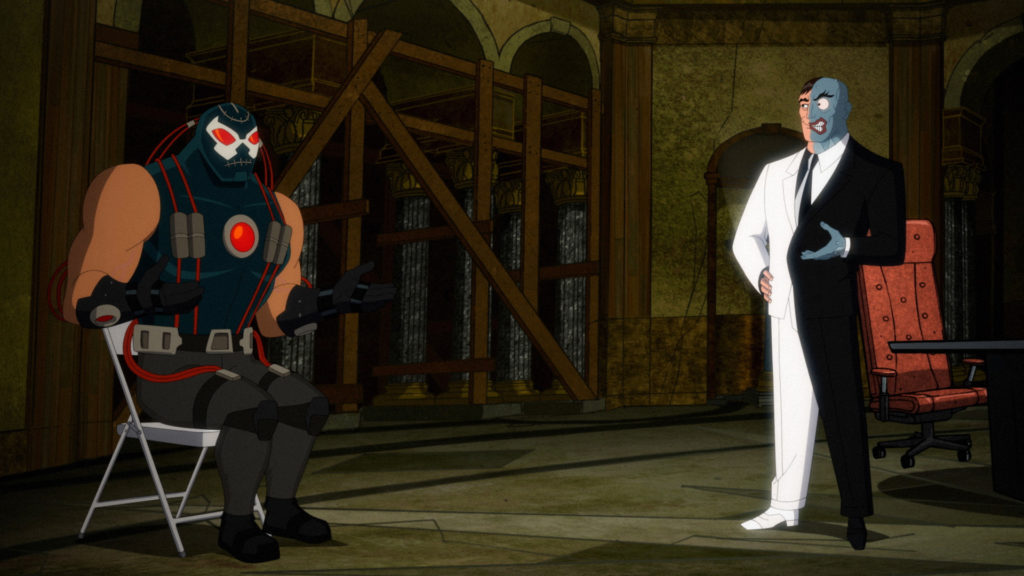 Back at the Injustice League HQ, Two-Face commands Bane to sit back onto his tiny chair. Despite the pair being the final members, Two-Face still greats him like garbage. Bane requests a team-up as they’re only remaining ones left though, but Two-Face rejects, as he still treats Bane as a joke.

Back at Wayne Manor, Bruce sees video footage of Batgirl filming herself beating bad guys. He is mad at the unsanctioned use of his symbol/logo. Alfred argues Bruce can’t even make a solid bowel movement in his condition. Later that evening, Batman decides to meet her anyway as a warning. She pulls him toward her and blasts that BATMAN IS BACK! All over social media.

At a bank, Two-Face robs the joint but can’t seem to keep the people in line. They’re no longer afraid of him because Batman is back, as his appearance on Batgirl’s feed has given hope to the people in Gotham.

That evening, Alfred smugly judges Bruce for selling false hope to the people. They argue. Alfred tells Batman that if he can’t even put on his own socks, then he definitely can’t defend the city. That Bruce’s ego is writing checks his broken body can’t cash. Annoyed, Bruce calls Lucius Fox.

Back at the tower, Two-Face finally gives Bane a chair. Bane’s ecstatic with joy and comments about its excellent lumbar support. Two-Face offers now to join forces, though Bane questions if it is only because Batman has returned? (It is). They agree to a 50-50 partnership, but their new brand and logo: ‘Two Faces’, doesn’t seem all that representative of Bane. In fact, it completely omits him.

Back at the Batcave, Lucius unveils a Titanium-based body armor for Batman. Alfred catches Lucius and Bruce and takes away the new suit into his bedroom, like a parent keeping a child away from a new toy. That evening, Bruce commands the suit’s A.I. ‘Monica’ to put on the Iron Man styled suit.

On the streets, Batman tests out the suit’s capabilities and beats up some of Two-Face’s men. Eventually, he finds Bane and the two battle. Batman tells his old nemesis that his beef is with Two-Face: the one running the operation. This infuriates Bane as Batman doesn’t ‘get’ the new brand.

Bane turns on his Venom and the two exchange powerful blows. Eventually, Bane gets atop Batman before… a cock rocket (like what Gordon asked for) hits Bane in the chest. Despite the effort, Batman is pummeled, as Bane breaks Batman’s legs. 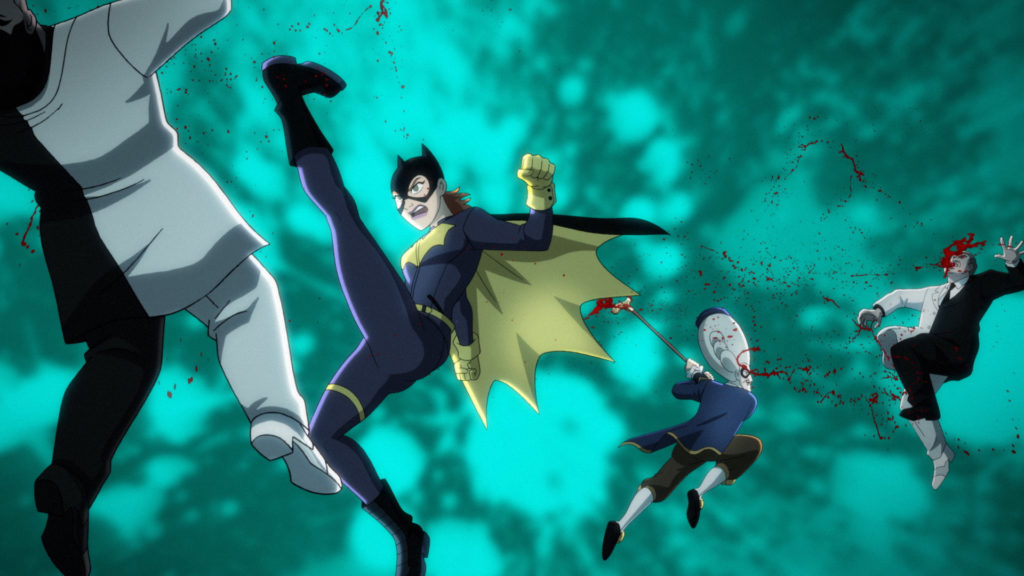 Now with a powerless suit, Two-Face’s crew hang Batman and are about to kill him just as ‘The Macaroni’ arrives to save the day. Batgirl arrives as well and kicks some serious goon butt. Macaroni then frees Batman… revealing himself to be none other than Alfred. Together, they help Batman up.

Back at the Injustice League HQ, Bane rages as even Batman thinks Two-Face is solely running Gotham. Two-Face calms Bane’s worries and then says to consolidate their partnership, he got the perfect place for Bane: a giant hole in the desert (A callback to Bane’s origins and obsession with deep dark pits. Think Bane from The Dark Knight Rises).

Finally, Batman calls Jim Gordon on the Bat-Signal. They talk about how to go about saving the city, and Batman reveals he’s not able to help. He presents to Jim a new partner: Batgirl, the only one who can keep hope alive. Jim reluctantly agrees, and Batgirl makes an official announcement on her social media. 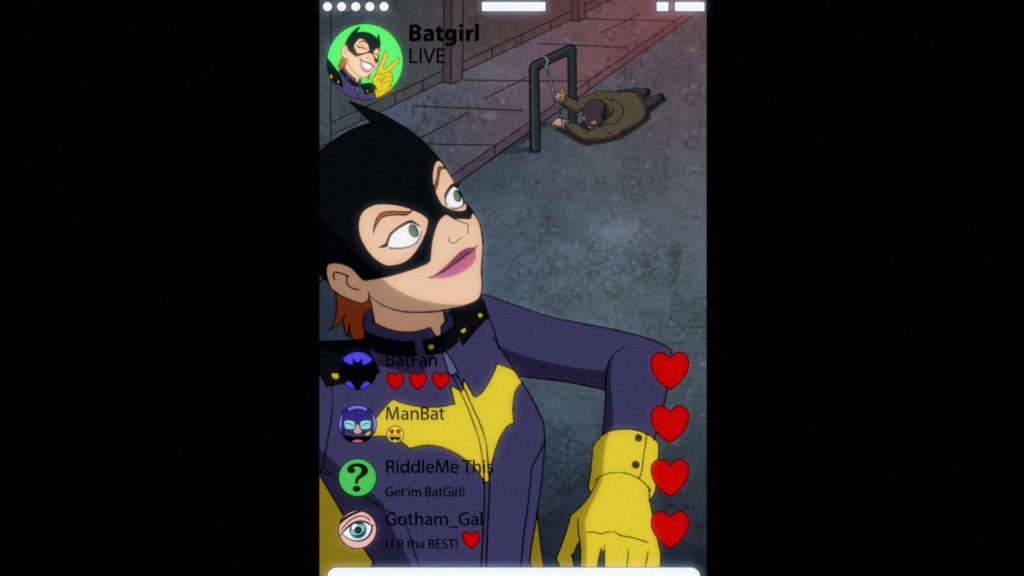 Funny all around with some of my favorite Batman character puns this season. ‘Batman’s Back, Man’ paints a flawed picture of Batman and Jim Gordon.

I also loved the callback to the ‘Batgirl of Burnside’ comics it seems that they’re inspired by this season — as Babs is very much that beloved version of Batgirl.

I have a feeling Team Bat vs Team Harley will come into conflict this season. Especially, given how resolved the injustice league storyline already seems to be.

But what were your thoughts? Feel free to comment below with what you think might happen next or even just to comment on your favorite scenes from this season.

Previous article
What We Do In The Shadows episode 2.04 Recap – Pay It FWD:
Next article
A Parks and Recreation Special: A Bright Spot in Dark Times