Harley confronts Mr. Freeze as Ivy helps Kite Man achieve a dream, learning what we do for the ones we love. We cover ‘Thawing Hearts’ in detail with the ‘Harley Talk’ podcast, Review, and Recap all below. 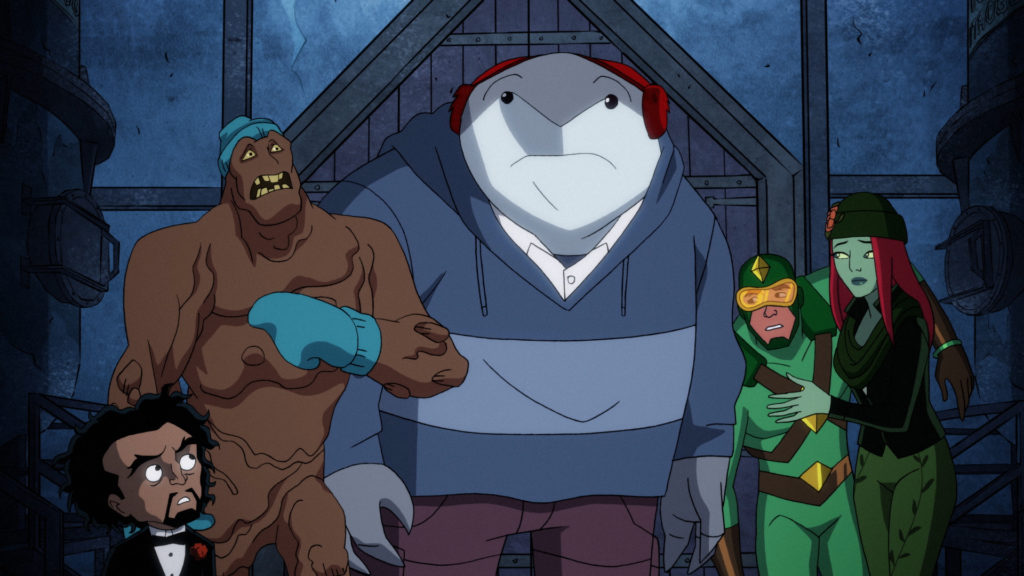 An empowered resolution to last week’s cliffhanger, this episode sees Harley come face-to-face with Mr. Freeze, whose subzero heart of cold subverts all audience’s expectations. Meanwhile, Ivy takes the next step in her relationship with Kite Man, as surprisingly bitter yet cheesy rivalries are revealed, and assistance comes from supportive boos in a way Harley doesn’t understand.

This episode focuses more on supportive characters yet again, though teaches Harley that people are more complicated than they appear. A notion which Kite Man shares, as we learn a bit about his… oddly simple dreams and an odd obsession with Clint Howard’s nuptials at the Gotham Corn Factory.

An overall funny and to the point episode that has Poison Ivy play the role of supportive girlfriend while teaching Harley a much-needed lesson that not everyone’s a dick, emotions are layered, and there are complexities in true love. 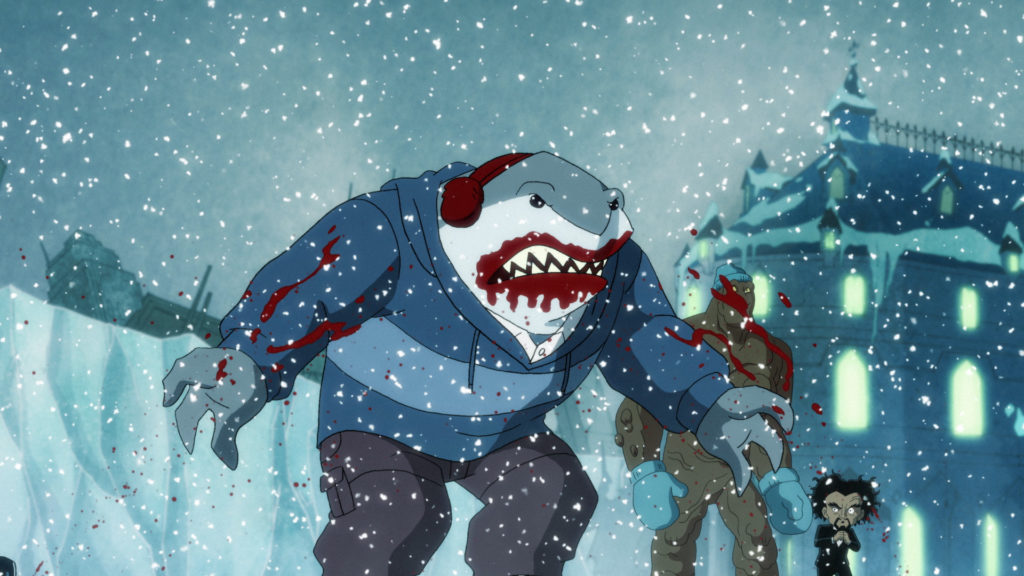 We open on Mr. Freeze’s ice wall, where Harley Quinn burns out a vagina-shaped entrance in defiance of the patriarchal script of all the villainous sexist dicks. Confused, King Shark takes a second to realize it’s a human vagina, and Clayface comments that it beautifully reminds him of his mother.

Having used all the gas in Firefly’s flamethrower, the team enters Freeze’s territory but are shortly interrupted by a phone message: Ivy and Kite Man are engaged.

When they enter the yard of Freeze’s large manor, they are greeted by ice hockey goons. The gang stylistically fights them, with King Shark bites off heads and Harley figure skates her way forward, all while discussing who to bring, or bang, as dates. Suddenly, the gang is interrupted by Mr. Freeze, who freezes everyone over.

Back at the Mall HQ, Ivy and Kite Man wedding plan, where Kite Man reveals a sarcastic congratulation message from his nemesis, Condiment King. Kite Man freaks out over wedding venues, while Ivy calms him down as the two agree to lock their venue down.

In his makeshift lab, Freeze unfreezes Harley and the gang then goes over his plan to find a way to cure his wife. He seeks to use Harley as a subject for a cure. Harley breaks free but is frozen before she’s knocked out. Before she’s used for experimentation, Harley offers to have Poison Ivy cure his wife. He agrees then goes off to prepare the group’s lunch.

Back in their cells now, Harley admits to stalling for time so she can take Freeze’s wife hostage in exchange for his freeze ray.

At the fine lunch table, the gang is frozen to their chairs. Freeze brings out his wife, who looks terrified but has a tube leading to her throat. Harley, in honor of all ice block women, vows to free her.

Mitchell, the Condiment King, is at the venue Kite Man and Ivy are hoping for, stating he’s brought his ‘fiancee’ Becca to possibly steal their venue. He fires mustard on Kite Man’s suit to make it harder for him to be approved. 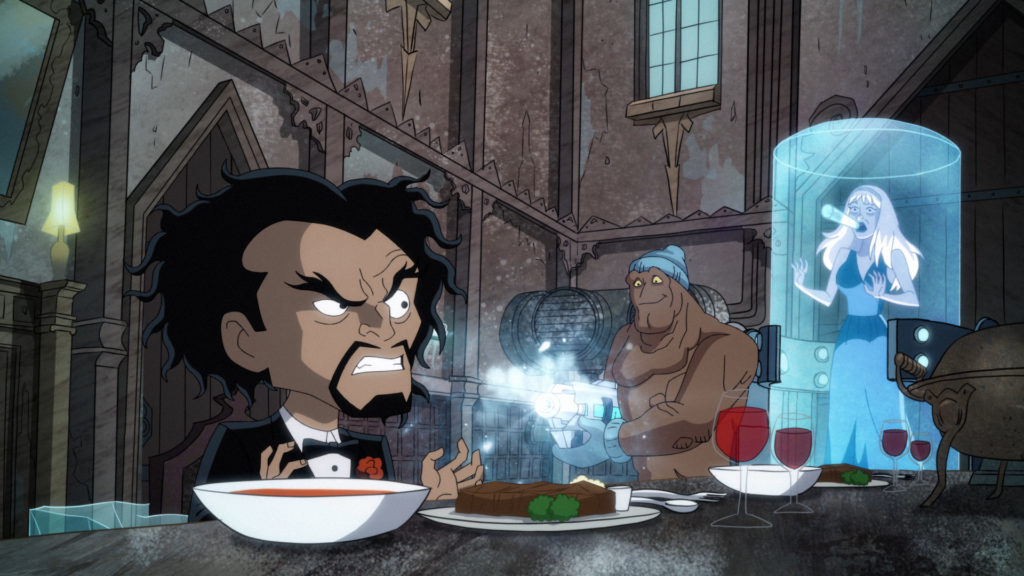 Back at lunch, Freeze gets off by hearing his guests describe their meals since he cannot eat. Doctor Psycho compliments the texture of the steak as “like butter.” King Shark asks for how they met, and Freeze reveals Nora owned a “Mom and Pop” cryogenics lab he was determined to squash as a CEO of a multinational corporation. Freeze, Ironically, hit it off with Nora at the same time. Harley angrily denies true love, as she brings up with her relationship with Joker, having given up her career as a psychologist and ruining her life. The gang continues to eat, while Clayface gets out to free them, reversing the freeze gun and liberating the gang.

Harley uses the gun to free Nora, who reveals she and Freeze are in love. Condemned to death by a rare genetic blood disease, Freeze locks the place down and sets off a time bomb with a warning: Ivy finds a cure or everyone dies.

The Condiment King hits it off with the wedding venue owner. Kite Man and Ivy seem to be losing the place, which causes Kite Man to claim and now defend his “personal connection to corn” to secure the venue.

Ivy arrives at Freeze’s lab, responding to Harley’s distress call. As Harley condemns Freeze for ruining her life by freezing her, he defends that he saved her life. As the other villains wanted to kill her, he convinced them, a group of white cis-gendered heterosexual crime lords, to turn her into a helpless object of mockery.

“Well, I hope you’re proud of yourself. You falsely accused the most woke ice-themed villain of all of New New Gotham.”

Ivy calls Kite Man to bring something from the old Greenhouse. He sacrifices the dream venue to do whatever he can for his fiancée. Kite Man is unsure which flower is the proper one, having inhaled the reddish pink one, effectively paralyzing him, but not before he arrives with the needed flower.

Ivy makes the cure for Freeze’s wife but reveals that the poison will need to be given and then extracted from a subject, one who’ll likely die. Freeze volunteers himself. 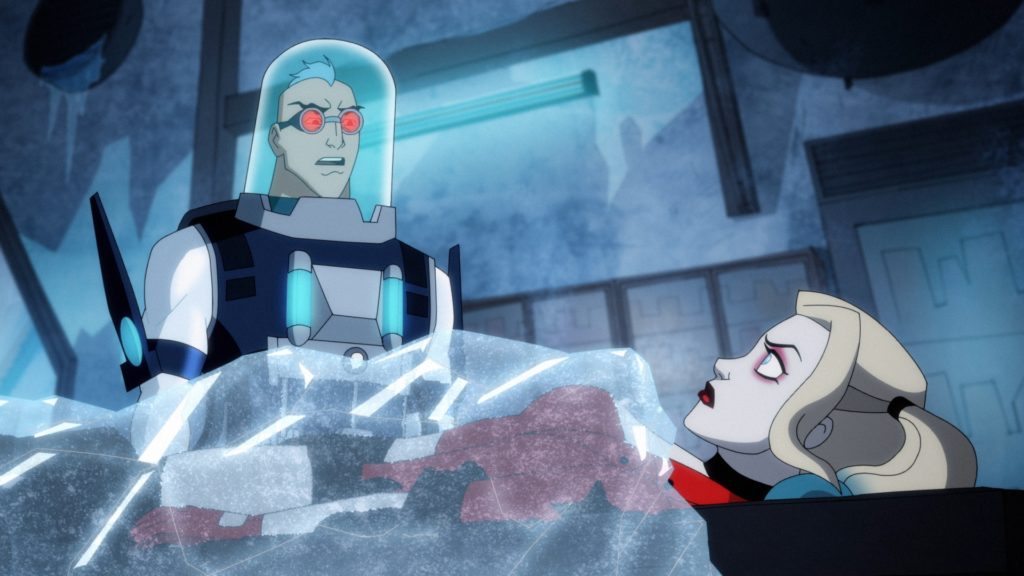 “If you truly love someone you’ll do anything for them.” – Mr. Freeze

Nora is healed, but Freeze dies. Everyone cries. Harley admits she’s never seen love like that before. They all agree Freeze was a good guy, as his wife screams to them all to leave.

Kite Man admits he’s down for wherever they can get so long as they’re together. The Old Gotham Corn Factory calls, where Condiment King rubs in the fact that he secured the venue. Ivy thinks he’s her nemesis now too. 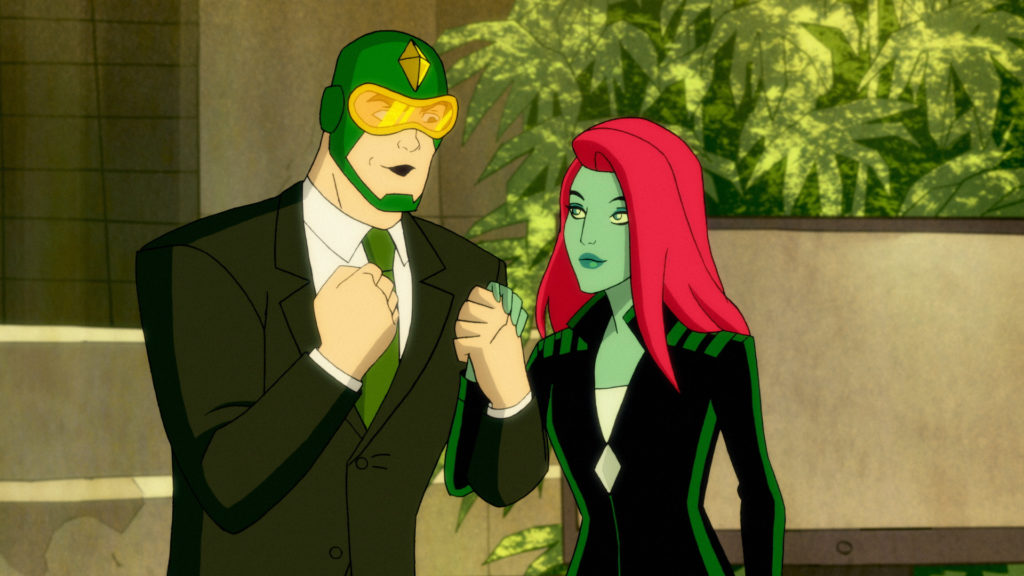 An episode about love and misconceptions, there was a lot to enjoy in this one: from the low brow comedy that flipped subversive gender expectations, to the Condiment King rivalry wedding planning. There was a lot to unpack from last week, and this episode nailed it on all fronts. What I thought was the most rewarding was the oddly redemptive Mr. Freeze, who’d taught Harley, and us all really, the value of love.

@theworkprint
Follow
Previous articleWhat We Do In the Shadows Episode 2.03 Recap – Tossed Salad and Scrambled Brains
Next article‘Coronavirus Explained’: An Overview on What’s Happening