Harley and Ivy team up with Catwoman on a heist as Doctor Psycho loses track of the Riddler.

The Workprint’s ‘Harley Talk’ will be reviewing every episode in Season 2. Available on Apple Podcasts, GooglePlay, and Spotify. 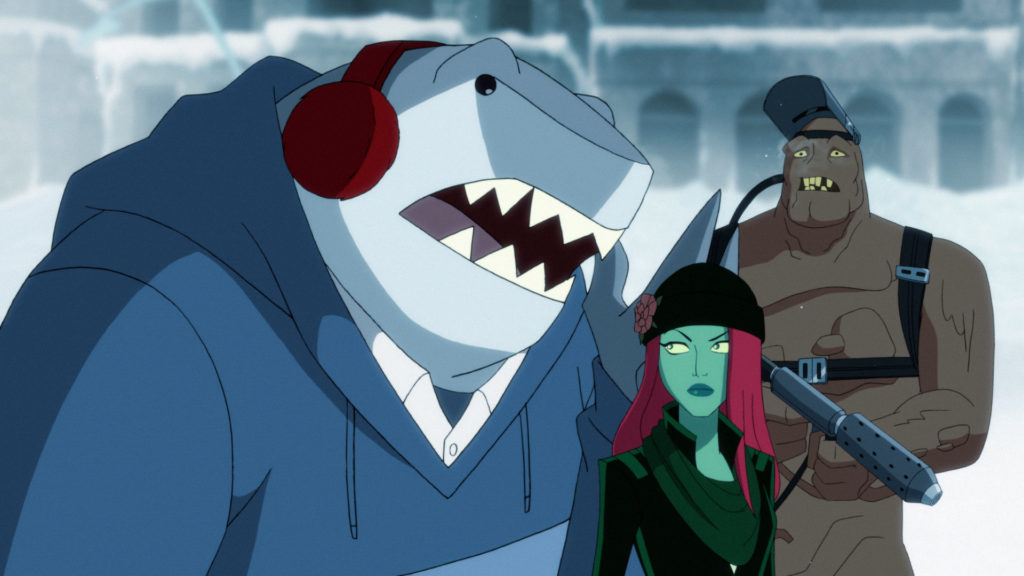 With Mr. Freeze next in Harley Quinn’s crosshairs, the crew runs into a wall on their journey. The solution: a weapon in possession of Doctor Trap. As Harley calls upon the services of Catwoman to aid them in a heist, issues are brought up, as Catwoman and Ivy’s troublesome history is revealed.

Solely dedicated into exploring Poison Ivy’s roots, this episode is pure character development. This consists of comparing who she used to be in her Catwoman days versus who she is now and her sudden dependence on others. We also delve into a bit of Ivy’s relationship with Kite Man, who goes on a quest to prove himself worthy of her affection.

Finally, back at the mall, we get a fun banter-filled B-story, involving Doctor Psycho and the Riddler, played by a returning Jim Rash. Their high-pitched and antagonizing dialogue plays a much-needed comedic break among the introspective Ivy scenes.

An overall solid episode, this one feels more like a build-up for next week with the occasional jokes and necessary trials tossed in-between. 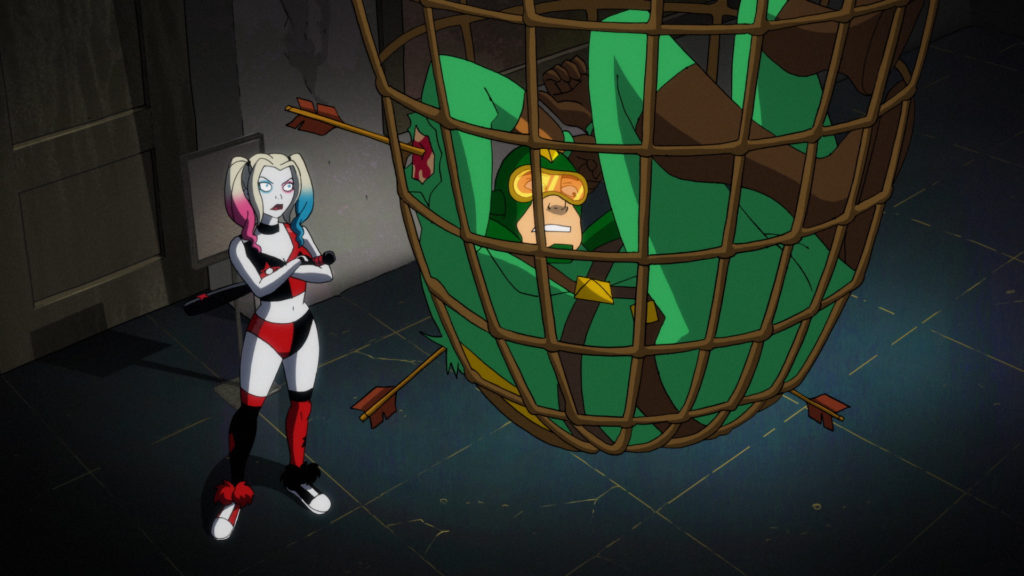 Failing to break through Mr. Freeze’s giant ice wall with a bomb, the gang decides to give up on recapturing Freeze’s territory, but Harley wants revenge. After all, it was Freeze that put her on ice and caused her fall from grace in the first place. While debating, Ivy finds a two-week-old newspaper, whose headline was regarding Ace Chemical’s dumping of waste into Gotham Harbor.

Harley then tries using an RPG on the wall to no avail. Hilariously greeted by Freeze’s wall-guarding goons, Fred and Kevin, the gang learns, rather conveniently, that they need to obtain Firefly’s flamethrower to break the wall. Harley thanks the duo and asks them to text her any more details if they accidentally think of any.

An affectionate Kite Man drops an equally-loving Ivy, and a very repulsed Harley, at the Gotham Museum. When they get inside, they stumble upon an array of Batman villain collectibles, and a menacing Doctor Trap who… sets off a series of spikey overkilling death traps.

Realizing they need help, the girls go on a lunch meeting to try and recruit a very suave and convincing Catwoman — who we learn had a longstanding history of mistreating and taking advantage of Poison Ivy — into helping them on their flamethrower heist. She agrees, but it’s evident to Harley that Catwoman’s a negative and controlling influence over her.

Late to the heist that evening, Catwoman makes a grand entrance as she’s greeted by Ivy and her boyfriend, Kite Man. The cool vixen is surprised to see the formerly independent Ivy so smitten. As Harley goes over the plan, Catwoman largely ignores her suggestions then dictates that she’ll take down the traps as they follow her lead.

As they break in, Kite Man reveals to Ivy he can’t join, as he’s deathly terrified of two things: traps and outer space. When the girls leave to break into the museum, Kite Man pulls aside Harley and admits to her that he’s lying; he’s secretly going in as well to seek a leafy green diamond ring to steal in order to propose to Ivy.

Harley and Kite Man enter the museum late, and Kite Man slips on a trap, which turns out to be just a pencil on the ground. Meanwhile, Catwoman and Ivy slip through all of Dr. Trap’s various contraptions, as the two have a heart-to-heart. Catwoman points out that, since she’s made these new relationships, she’s very much lost her environmental convictions.

Back with Harley, Kite Man has proven himself to be a bumbling idiot, who’s falling for every single trap in the Museum. Harley frees him and wants to get back to the girls, but Kite Man professes just how much he loves Ivy, refusing to surrender. Harley agrees to help him. Kite Man triggers another trap and almost gets eaten by a nest of spiders.

Later, as Catwoman and Ivy carefully get through the traps to the flamethrower, Harley surprisingly joins them. Wondering how she got there without triggering all the traps, Kite Man is revealed to be there as well, stung by bees and having sprung all of the traps they just mentioned.

Ivy checks up on her boyfriend and is surprised he is there. Catwoman opens the glass case to the flamethrower. Kite Man then pops the question… surprised to find his engagement box empty, as Catwoman bids them farewell, with the rare ring in hand as she makes her escape.

Suddenly, Doctor Trap sets off a glass trap that slowly descends to a crushing death. In this awkward moment, Kite Man proposes to Ivy, who tries to think like Catwoman to escape, but then, freaks out about who she is and if she’ll ever be ready to be married. Before they are killed, Harley uses the flamethrower to melt a hole through the glass so the group can escape. She then breaks Doctor Trap’s metal jaw with her bat.

Back at the Mall, Doctor Psycho feeds the Hyenas dog biscuits as the Riddler, who is still running on a hamster wheel, asks for one. Psycho is angry at Riddler for not being invited into the injustice league. Riddler eggs on Psycho, leading to a confrontation where the telepath flings assorted bottles of oils and lubes at him. Hours later, the Riddler goes missing, having used the body butter to slip out of his constraints.

Wanting to prove to the group he’s a competent leader, and feeling guilty because he’s failed at every task Harley has left him to do thus far (he ate the koi fish instead of feeding them) Doctor Psycho rallies the others to find the Riddler. Yet, the evil genius proves to be more tricky than they can handle, mostly by feeding on Psycho’s insecurities about becoming Harley’s Hench and a failure.

When Harley gets back, Clayface breaks and admits that they lost the Riddler. When they search for him, they find Psycho on the hamster wheel generating the Mall’s electricity. It’s then revealed Riddler never left and was sitting there the whole time, revealing that he wants to stay. The outside world is a mess, and, with three square meals, plenty of cardio, and the group’s drama as entertainment, the Riddler chooses to enjoy this until he’s ready.

At the harbor, Ivy punishes the Ace Chemicals executives and Harley joins her. The girls have a heart-to-heart, where Harley reveals Kite Man isn’t so bad, and Ivy’s a better person for opening up to people. A lot more put together than Catwoman.

Accepting all of this, Ivy comes to a decision. She goes over to Kite Man’s place and apologizes for taking it out on him for not having the life she thought she should. She tells him to ask her and…

We’ll find out what happens next episode. 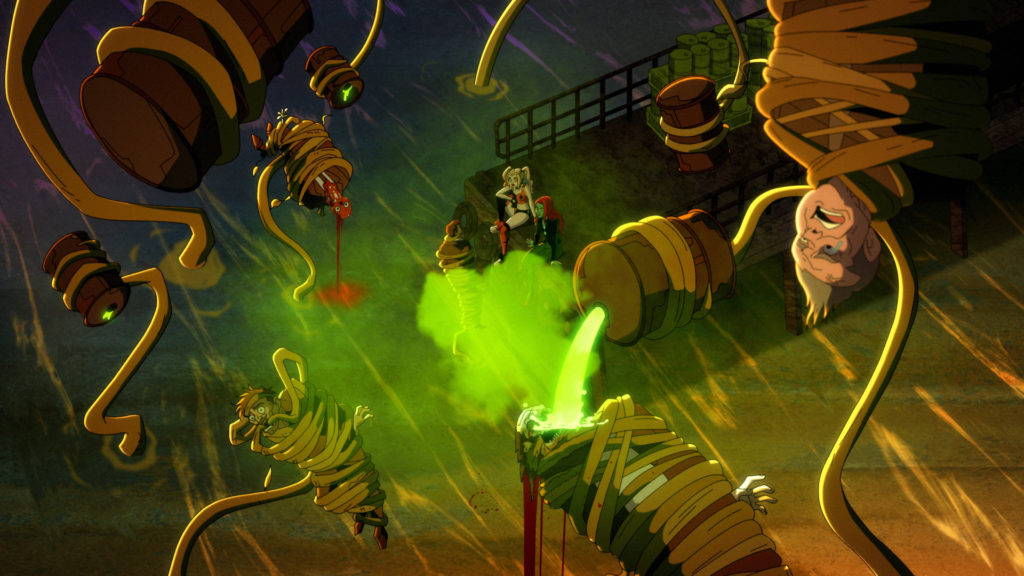 This one was a solid character and relational buildup, though I didn’t take much else away from it. It did have a nice theme about relationships and how it is okay to let other people into your life, especially if they like and are trying to help you.

Outside of the character plots, all the beats were met, and the jokes were funny enough. All for a solid yet unspectacular episode.

Previous article
What We Do In The Shadows episode 2.02 Recap – Vanity Mirror
Next article
‘Here We Are: Notes for Living on Planet Earth’ Review