Why Glitch Techs is The Greatest Homage to Gaming Culture Ever Created But Will Need Your Help to Survive. A Spoiler-Free Review.

I don’t speak in hyperbole that often unless it’s warranted, and in Glitch Techs case, I firmly believe in it. A show about a group of teens turned gamer-ghostbusters, Glitch Techs checks off on the list just about everything that makes a hit animated TV series. I even go so far in the podcast above to compare it to both Adventure Time and Steven Universe.

The problem with Glitch Techs is that it’s just not getting any sort of support from the media. It’s only hope seems to be here on Netflix, but it needs to start trending ASAP yet is still getting little promotion, and is soon to be overshadowed by tomorrow’s debut of Lucifer. A show which I’ll be covering too for The Workprint, but still want to stress that if possible: WATCH GLITCH TECHS. 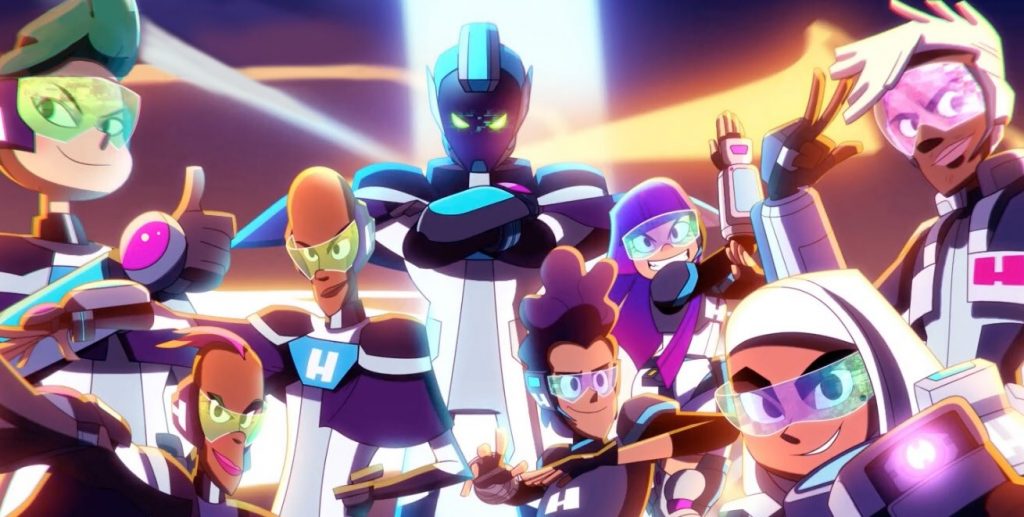 Now, I’ve already gone into my history as to why I like the show. Mostly, that it plays off an idea about video gaming that I always wanted to create as a writer; yet, to add to this newfound love of this series, I also want to stress that the art is superb, it’s gaming culture well-researched, and it’s characters are simply delightful, with a fond and loving endearment towards video gaming.

I’ll even go so far as to say: it’s the most enthusiastically authentic love letter to gaming that  I’ve ever seen.

But to even get here Glitch Techs has gone through years of developmental hell: supposed to be released in 2018, delayed until 2019, and then finally released in 2020. The series stalled to halt in production throughout the years and much of its staff was laid off. The show only finished 20 (episode 1 was technically 2 episodes) of the 30 episodes that were set to air on Nickelodeon before the entire project transitioned to Netflix. And even then, it’s the only season was broken into part 1 and 2 installments. 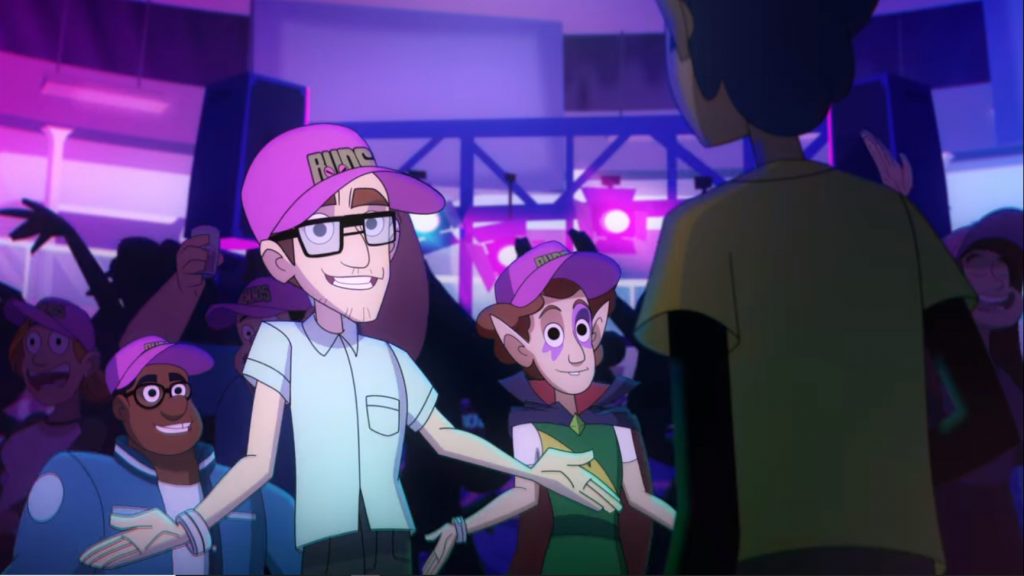 Where it stands now and its future is left up to YOU the audience which is why I hope you watch. I also think it’s a shame because I firmly believe the show could have been a hit had it gotten the attention it deserves. You can also tell the amount of research and development that went into this series, and as a longtime gamer myself, there’s a lot of love.

So here’s my best attempt at convincing you to watch it and spread the word. Without further ado, this review will take a fine-look into Season 2. 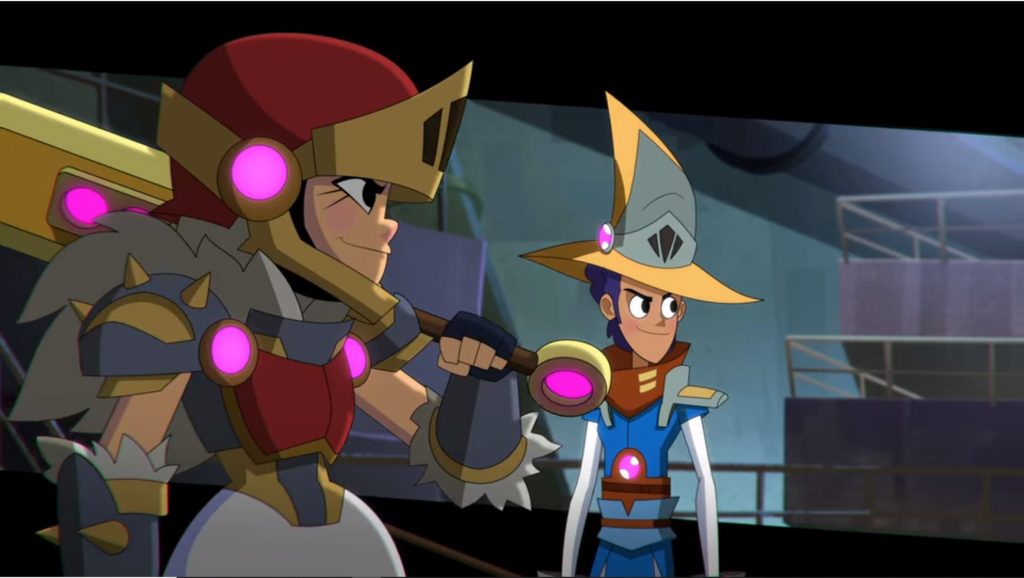 One of the things I love about this show is the show’s gaming lexicon. Because a lot of the L33T speech and gamer terminologies is authentically real. When you combine it with the seriously astounding art quality, you do feel like you’re in an RPG built for-and-about: gamers.

The textures are smooth, the color vibrant, and meta-breaking points and in-game/in-show dialogue bubbles take a very Scott Pilgrim vs. The World approach. There’s also an astounding amount of actions that homage both western and eastern styles in harmony, with transitions that’ll shock and awe, in a friendly: PG13 approach. 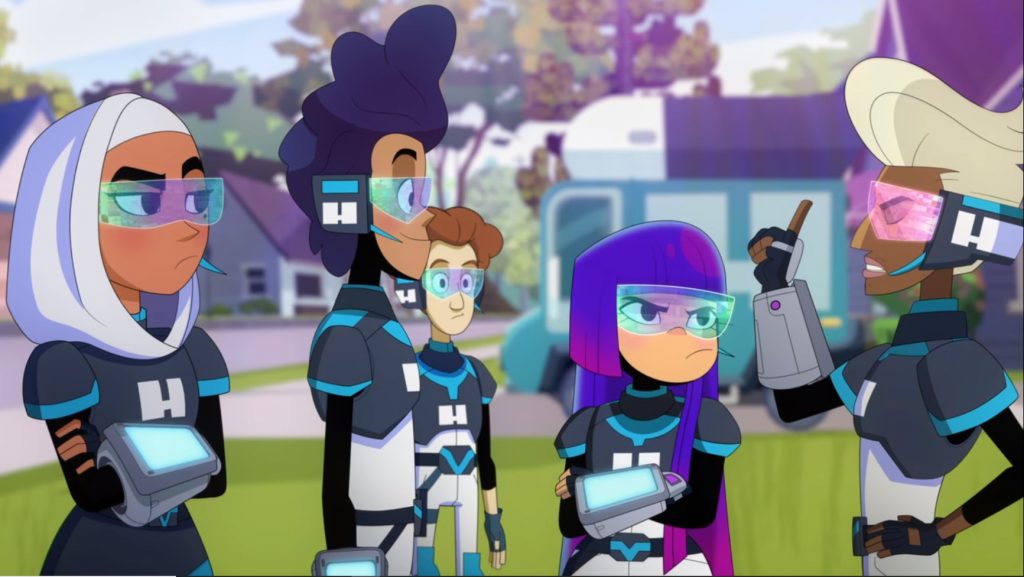 It’s just high-quality production work all-around. Which is surprising, because when you enmesh this artwork design together with the chiptune themed soundtrack and sound quirks – and yes, nods to retro gaming (be prepared to embrace all the bleep bloops) – you’ll realize like I have: that no one’s ever done it like this before. Which is fantastic.

For those who tuned into last season, you’re in for a treat because a lot of the characters will not only have expanded roles, but will also have a few updated wardrobes, characteristics, features, and designs in both their styles (like how they pose and hold themselves) and in their gameplay (aka, their fight scenes are cool). You’ll even get some really fun moments seeing Phil, the overweight Glitch Tech Boss and sorta dad of the group, in a combat suit. 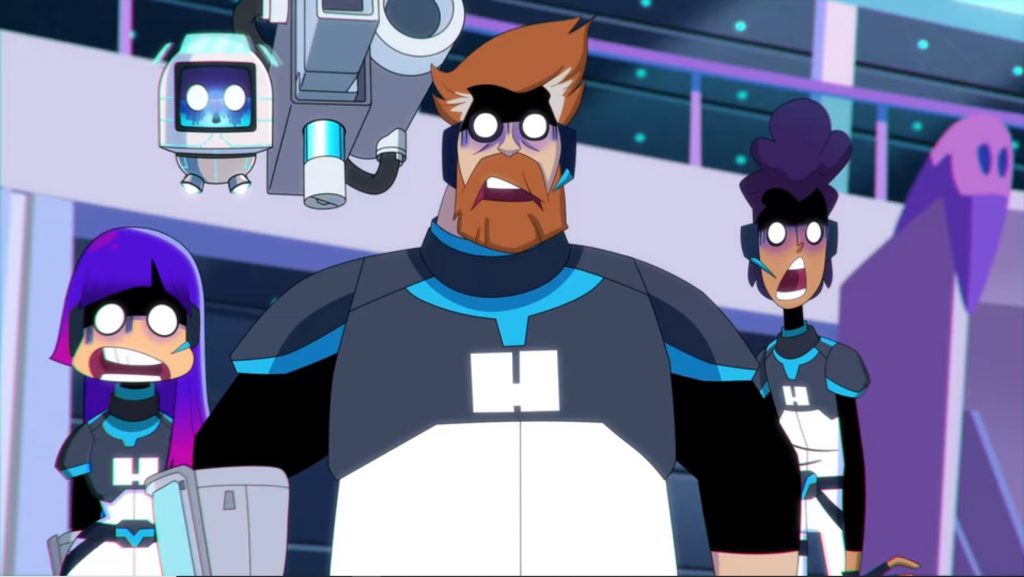 As a special gem for Season Two, I’m going to say to be sure to check out episode 6, the clip show episode, which was a masterful work in editing. It was likely my favorite episode of the season in that it shows the best of the series’ art while also taking a great look at all of the show’s characters. There is also a surprising amount of heart in that episode with a riveting speech by Hi-5 which I think is emblematic of the themes that the show is trying to create. 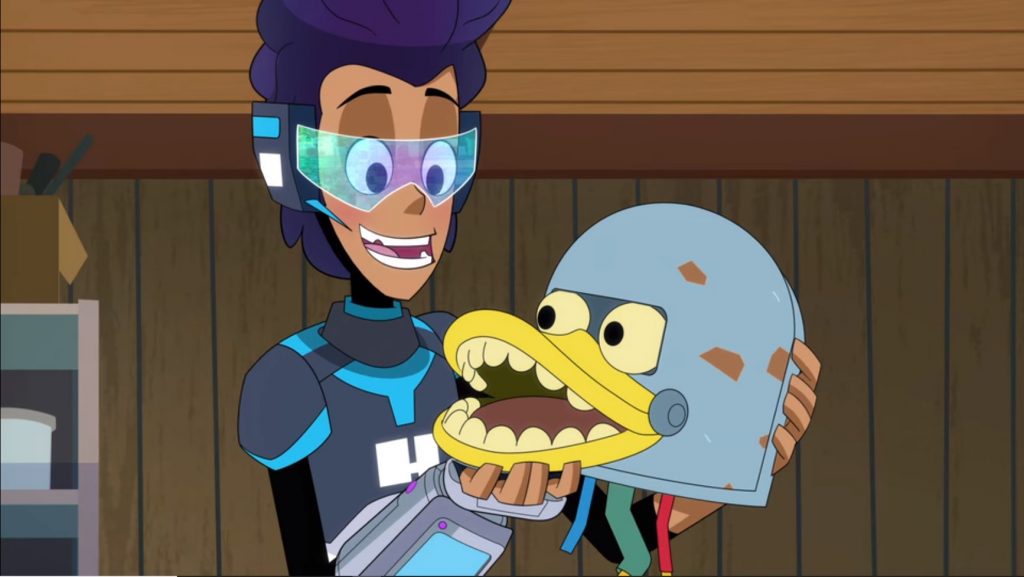 I’ll also just toss in a few other eye-candy marvels and funny moments of kudos I’ll let the reader discover for themselves if they choose to watch: A Tech Spec Terminator parody, Cat-Glitches in a sea of kitten collectibles, Ping Pong, A Giant Godzilla tribute Kaiju battle, DDR, and of course: an homage to Five Nights at Freddie’s.

Building Up That XP 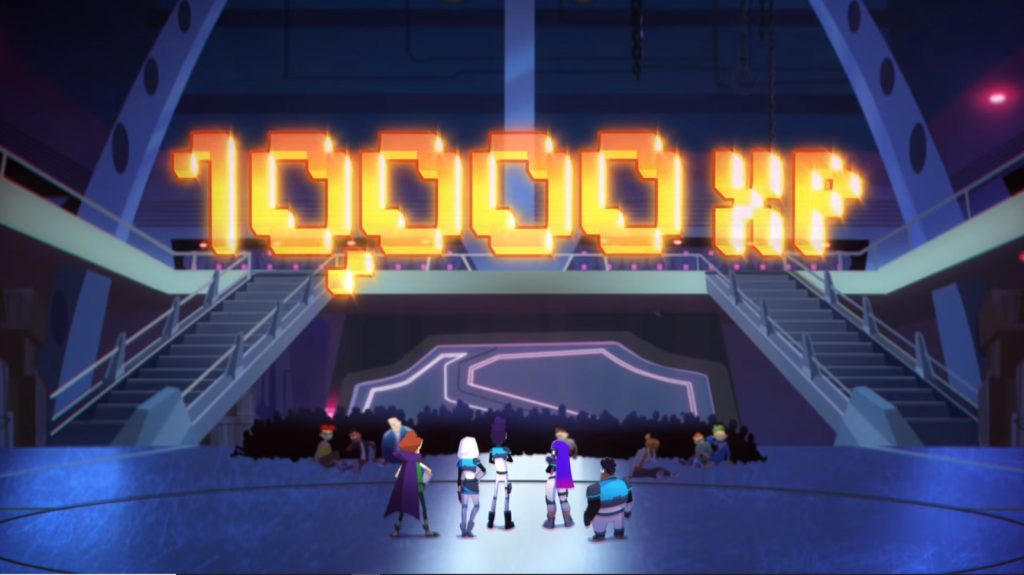 One of the coolest things about reviewing this show is that I learned how a lot of the material hinted at and seen throughout the series is tied together again with the pilot, suggesting that there’s more connection than initially realized. That said, the writing feels like it’s building up to something bigger but it doesn’t fully get there by season’s end. It just hints that something’s afoot.

The episodes themselves feel like stand-alone adventures without full arcs or rising conflict. Which may initially seem shy of a hook to the series, unless you watch between-the-lines. The beauty about Season 2 (or really, Part two of Season One) is that almost everyone gets a type of backstory and has their character develop in interesting ways that don’t necessarily agree. There are cracks in the organization and bigger themes that see hints of development at Hinobi Tech. The problem: is that the series needs a renewal to payoff all these developed beats. Which is all the more reason we need to petition for a Season 3. 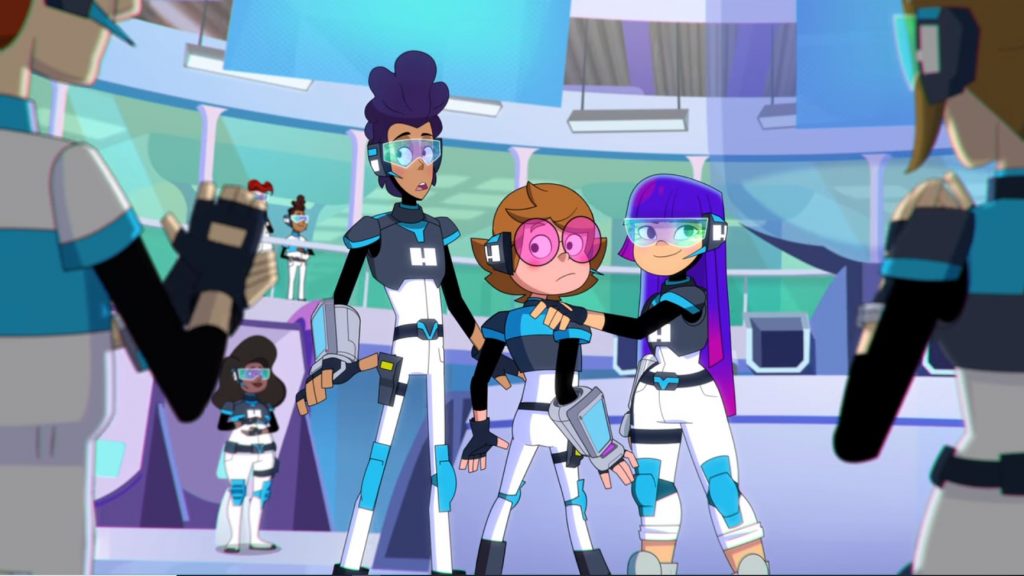 In season two, we are introduced to a new character named Riley, an outcast and a modder (Like a real-life modder, someone who reprograms and adjusts with the specs of Hinobi Tech, like capturing and messing with the code of glitches)  who befriends the socially awkward Miko in a storyline about friendship. Riley also plays a large part of the opening and middle points of the season and looks to be a returning character whose unique abilities will play a large role in the series.

Atop of this, we get expanded storylines of returning favorite characters. There’s a lot of Mitch development in the series regarding his role as the top player, why it matters, and his history as an elite gamer. All for a surprisingly compelling take on the series’ bully and why it matters to him to be the best. We even have some stories featuring Phil and BITT. 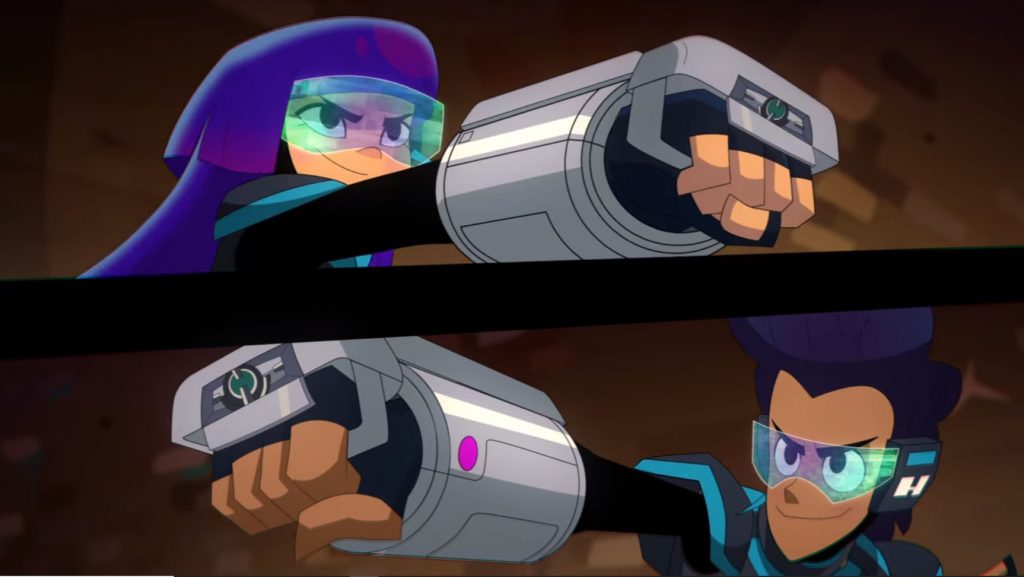 As for our dynamic duo, Hi-5 delves into a bit of his surprisingly haunted past with his relationship with his father and Miko breaks down her complicated relationship histories with games herself. Mostly, in how she used them as an outlet for what’s revealed to be a lonely childhood. We also get more reminders that Miko is special in this series: the show reminding us about her immunity to memory wipes and her outstanding skills as a gamer.

We also get a surprising amount of backstories to the other techs and even learn about the Dabney town Glitch Techs. As Nix, Simi, Zahra, Haneesh, and Bergy all hold expanded roles and unique character traits, places of work, and even budding crushes (you’ll never guess who likes Hi-5!). All for a fun Glitch Tech family! 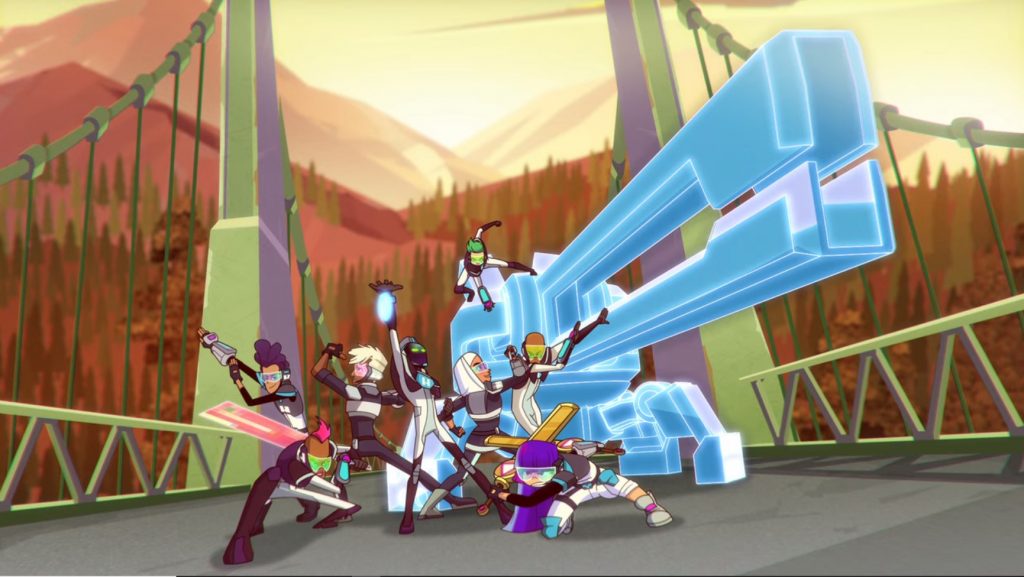 As mentioned, there’s also something bigger afoot at Hinobi Tech which the last few episodes seem to hint at, and if you’re reading this, I suggest you take note about. As a fan, I think the organization is more than what it seems as a MIB/Ghostbusters/Pokemon/Ready Player One Parody, as awesome as it sounds, can only go so far without some sort of greater scheme intention. My fan theory: is that Glich Techs will be going full-blown Digimon at some point (meaning the sprites/pixels/glitches will start becoming fully feeling and incredibly real people).

Again, it’s definitely a show worth rewatching a second time because the seeds of the story are there.

Holy Mother of MOBA, I haven’t even Talked About The Best Part Yet! 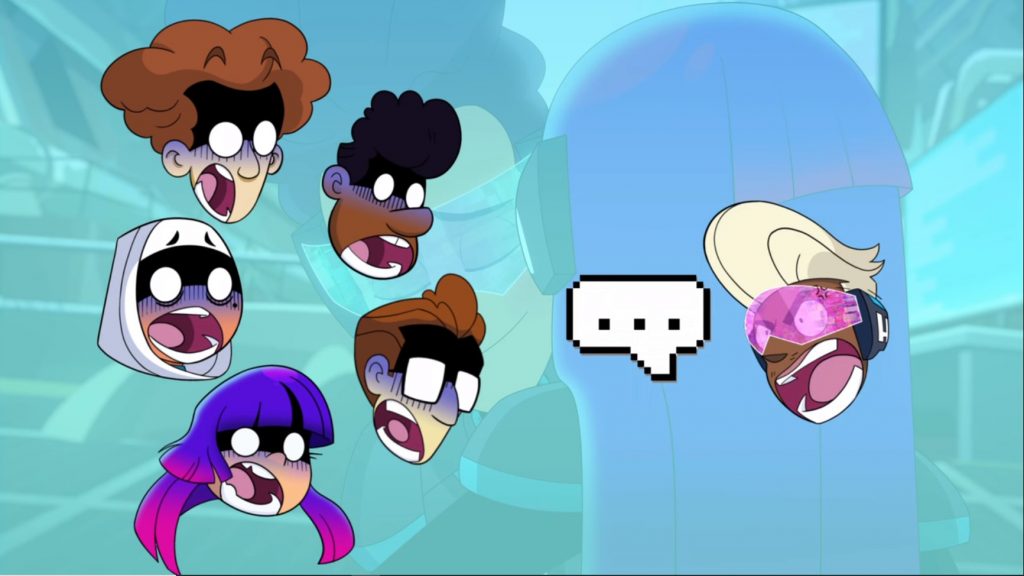 There are references to MOBAs, MMOs, Shooters, RPGs, Platforms, Arcade Beat-Em-Ups, and basically everything you’d want in a video game reference. I stressed it in my feature earlier this week and I’ll stress it again: this show authentically cares about gaming. With kudos to showrunner Dan Milano for the extensive research and love of the games that I grew up with as well. 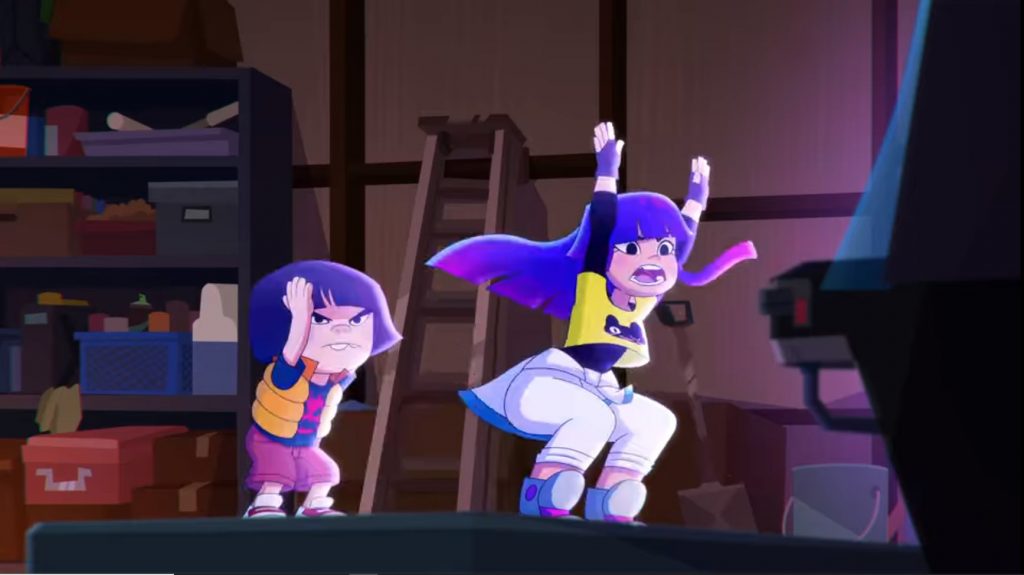 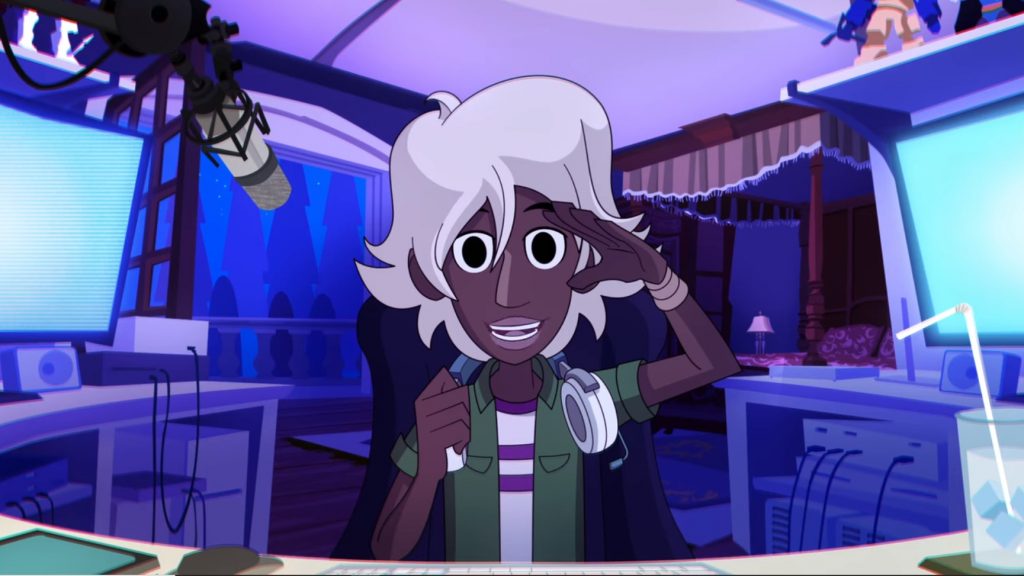 That’s the quote by Mitch Williams at the end of the pilot episode and I think it sums up this series rather nicely. See it’s all about gaming. If you love games watch this series. Tell it to a friend. Watch it twice. Heck, even more.

To be honest, I’ve been dying to write an Augmented Reality story that was a love letter to the gaming industry. But I’m too late. Because Glitch Techs is totally that story and more. It’s got heart. It’s got characters. And most importantly: It actually cares about video games.

Previous article
‘I May Destroy You’ Episode 11 Recap – “Would You Like to Know the Sex?”
Next article
‘Lovecraft Country’ – Episode 1 Review & Recap