Though you’ve likely never heard of it, Glitch Techs is a rave New Show in 2020 that deserves attention.

When I was a psychology student at University, I was curious about the topic of human emotion. How emotional anchoring connected with human memories. Themes beset on significant events in our lives that would inevitably come to define who we are as people.

When I left psychology to pursue screenwriting, I had always intended on creating a screenplay about what I knew about emotions. Believed that there was a poignant take on the science of feelings with a story desperately waiting to be told. And I was correct.

It just wasn’t written by me.

You see, years ago, I had watched a movie about anthropomorphized human emotions. Filled with an A-list cast, it was a beautiful story about growing up, saying goodbye, and emotionally processing. A tale about friendship, affections, and how to process our feelings. With the biggest takeaway – a lesson which I learned in my college years – being how a moment immortalized in our memories could be anchored as both happy and sad.

This film, of course, was called ‘Inside Out’

Now I’ve watched and written a lot of work now in my 30s. I’ve seen the templates of just about everything that can be told in stories, television, movies, and most recently: video games. Which is why Glitch Techs surprised the bejesus out of me. It’s a show that I wish was around when I was 14. Because just as ‘Inside Out’ was what I studied at University, Glitch Techs is what I lived through video games for just about my entire life.

What’s fun about the show is that it takes this idea I had been playing around with ever since reading ‘Ready Player One’. Which is this:

What if there was a show made about videogames that actually featured real gaming gameplay? What if we turned it into a real-life augmented reality? It’s the idea of actually living out our nostalgia. Physically playing the best in Shooters, Beat-Em-Ups, RTS, Mobas, and all the nuanced video game genre styles of gameplay that have now faded in pop culture conversation.

This was the original idea I had partially been working on for the past three years. It is also… a series that I was too slow to act upon because it already exists. 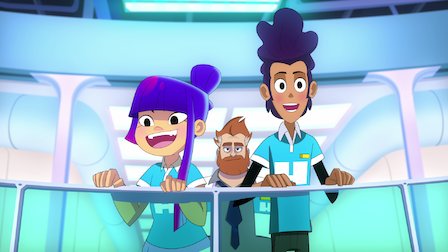 Glitch Techs is an animated TV series created by Nickelodeon and Netflix. A fast-paced children’s series reminiscent of Saturday morning cartoons and 2000s era of video gaming. Most importantly: it’s PG friendly, diverse, and representational. All elements that introduce the games from the years of older millennials into generation Z.

High Five is a socially anxious Hispanic boy who loves video games. A straight-laced but awkward teen down to take on a call to adventure. This, of course, can only be done with the help of Miko, a gamer-girl who does more than hold her own being not only Five’s equal partner but also, an elite gamer in her own respects.

The show sees episode-by-episode tales of their adventures stopping bugged out glitches from destroying the world. It’s also nostalgic and fun, a Family-Friendly comedy.

Now, I’ll be honest: a lot of what works about Glitch Techs can be seen in the book (and later movie) Ready Player One. This show is more-or-less a childhood friendly version of that, minus the post-apocalypse.  For a Nickelodeon series, this works, as I don’t think I remember anything of this caliber level of entertainment from the Network since Avatar The Last Airbender. And while there isn’t as poignant a theme (at least as of yet),  the series’ world-building is astonishing. True to its fans and very well-researched about gaming.

Did I mention I reviewed Ready Player One the movie here a long time ago? To be honest, it sucked. Was utter drivel and self-indulgent garbage that was not loyal at all to either videogames or the 1980s.

Though the plot was cookie-cutter, my biggest issue was Ready Player One forgot what it was about almost immediately. The MMORPG aspects were imperative to World of Warcraft styled gaming of that time. And though the movie tried, it overall failed to capture gaming culture by obsessing, instead, over virtual reality and any creative license they could throw-in as an easter egg. The movie was more pop culture phenom than actual attribute style to video gaming. Upsetting because even its homage to classic arcades fell to the wayside.

I stress this because Glitch Tech is 100% the opposite. It doesn’t care if you remember the references, it just throws these characters into these familiar situations and easter eggs. It lets you play these old games without the audience even realizing it, having it feature as an organic conflict within the story.

And sure, we won’t hit the same life lessons as a Steven Universe per se. Though, we will get awesome cameos by Felicia Day and Ashley Burch (who voices and writes for the series). And if you love videogames, I’m sure you’ll know who those two ladies are (Spoilers. They’ve revolutionized video game pop culture, respectively).

What’s great about Glitch Techs is that it actually builds both storylines and comedy based on actual video games and the art of playing them. Players are catching pokemon. Battling monsters. Firing Metroid and mega-man like beams and weaponry, and holding a fort down like in overwatch. Like Castlevania? That’s there. It’s all just a part of the glitch busting world featuring kids who love the games just because they like playing them.

I know this because I played these games. And no, I don’t just notice their skins for marketability’s sake like in Ready Player One. Glitch Techs actually goes the extra mile.

It plays the game. Which is really cool. Season one of Glitch Techs is available online.

@theworkprint
Follow
Previous article
The 100: Season 7 Episode 11 Review – “Etherea”
Next article
‘I May Destroy You’ Episode 11 Recap – “Would You Like to Know the Sex?”