A love letter to America’s postal service, The Great American Mail Race is a board game based on the historically surprising delivery methods of the USPS, including the use of guided rockets and a mule.

On February 23rd, 1936 two rocket propelled airplanes were launched from NY to NJ across the historical Greenwood lake, less than 100 yards away. The event took place twenty years before the first Sputnik cosmonaut mission and was set an entire decade before the age of missiles began in the US military. It was a pioneering moment for rocket science. Surprisingly, the US postal delivery service sold collectible stamps commemorating the event because, in fact, both of these rockets were loaded with US Postage. The Greenwood Lake rocket mission was the beginning of a rocket delivery service for the USPS, an effort that ultimately didn’t come to fruition.

Surprising, this isn’t the first strangely innovative attempt that the USPS used regarding the transportation of mail. Since its inception, the postal service has utilized the services of planes, trains, hovercrafts, automobiles, boats, ferries, helicopters, subways, bicycles, and since the 1930s, pack mules to get across mountainous or indigenous terrain where other vehicles couldn’t. This is the focal point of The Great American Mail Race board game. A 2-4 player cross-country experience about postal delivery released by Big Potato games. 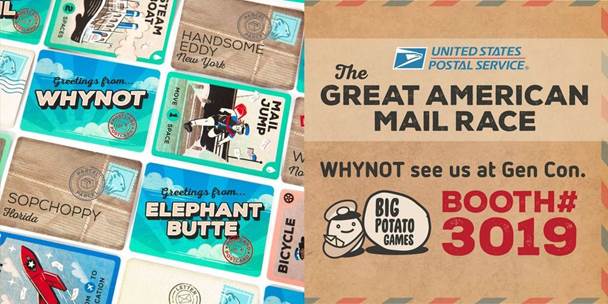 The Workprint got the chance to sit down and talk with Massimo Alessio Zeppetelli, the marketing head of Big Potato Games. He shared with us how The Great American Mail Race brought to life the best of the USPS, surprisingly revealed to be the statistically most-beloved brand in America, beating out such names such as Chipotle, Nike, and even Google.

“I think kids love the USPS because they love seeing their postal worker delivering mail,” said Zeppetelli regarding the game’s popularity at GenCon 2022. “It’s very exciting for them and is a big reason why the age range is 10 and up. Being at GenCon, it’s really interesting seeing the age scope as the kids love going into the mail truck.” 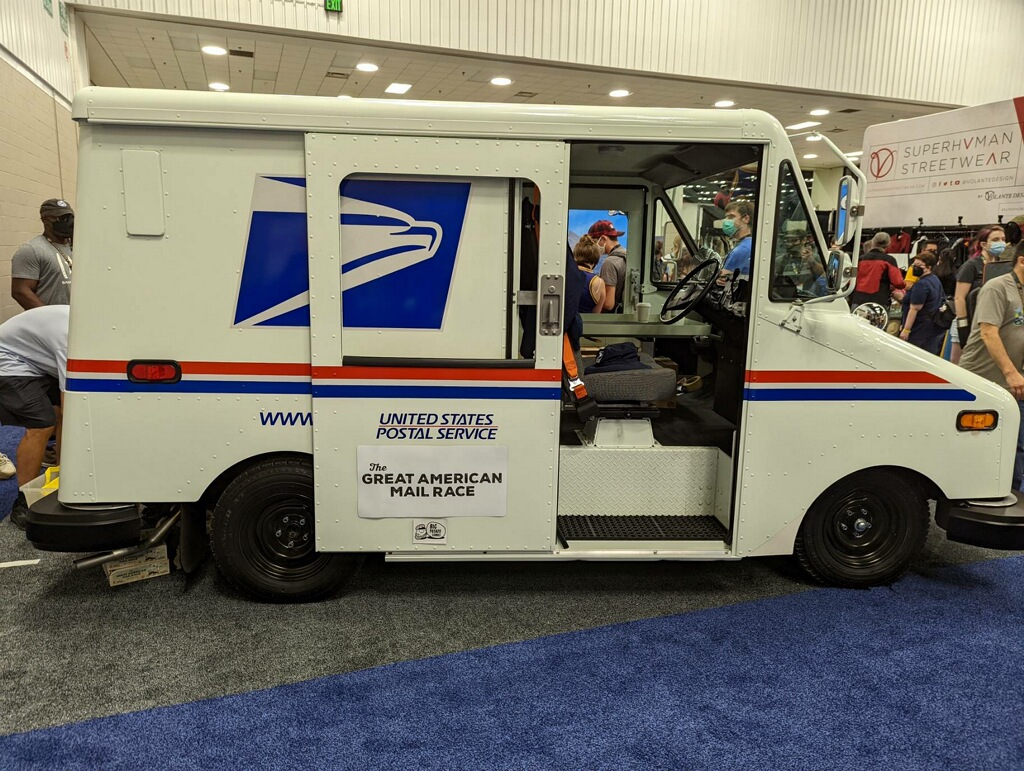 With GenCon 2022 back and bigger than ever, it was pretty amazing seeing the return of all sorts of fun events and games. The Great American Mail Race, available at the Big Potato Booth 3019, was unique in that it was definitely an event for the family.

Sponsored by the actual USPS, many postal workers dropped by as the game was a genuine tribute to the hardworking laborers in the service, and even featured an actual refurbished Postal Service Truck. Visitors could take photo ops in the truck with their kids along with trying out different mail-person attire.

The Race For Delivering Mail Is Surprisingly Fun. With a High Board Game Geek Score and Mechanics That Are Easy To Learn for 30-Minute Games.

In the Great American Mail Race, 2-4 players have the goal of delivering mail across the US using different modes of transportation. The object is straightforward: at the end of the game, the player who delivers the most mail scores the most points and wins.

What’s unique about the points system is that progress is actually tracked with an old school mailbox stamp. Postage can vary across the map from letters, parcels, and postcards, with bonus stack points for delivering mail on the same day or in different regions.

The board shows a traditional map of the United States but with very untraditional names of different cities and towns set in each state such as Bald Head, Whynot, or Castle Danger. Traversal begins with the lowest forms of transport, which then progress as time goes on into other modalities of transport such as mules, hot air balloons, four-by-fours, and even a rocket.

Because everyone is trying to deliver as much mail as possible, if a player interacts and passes a another player (two can never share the same space), that person can actually ‘assist’ in delivering a package by taking that player’s package away to finish their route as they’re operating faster (basically, it’s a steal mechanic). The game ends when all the cards are used up and final points get tallied.

“I’m personally really excited and confident in this game as there’s a lot of hype and people generally interested,” remarked Zeppetelli regarding expected success for the game. “People like it and don’t see it as just a gimmick as we worked really hard to make it really good. All the early signs of interest are really strong so i think it’s going to be an engaging successful game.”

The Great American Mail Race is appropriate for people ages 10 and up and requires two to four players for a play through. It sells for $34.99 and is available exclusively at Target.com.

Previous article
What We Do In The Shadows Recap: Private School
Next article
Who Do You Think You Are? Bradley Whitford Review