The funniest comedy shorts involving stick figures on the internet, Cyanide and Happiness have been around for nearly two decades. Averaging over a million views a day, the series was created by cartoonists Kris Wilson, Rob DenBleyker, Matt Melvin, and Dave McElfatrick, back when they were mostly in high school. First, as a webcomic that began in the mid-2000s, then later, as an animated series featured on youtube.

Recently, Cyanide and Happiness have pivoted into tabletop gaming with Joking Hazard. A popular party-themed card game based on the brand’s random comics generator designed much in the gameplay styles of Cards Against Humanity. With four expansions having debuted these past several years, including at Gen Con 2022, along with another C+H themed game in Trial by Trolley, it came as no surprise to see the development team at it again during Gen Con 2022. This time with their newest game: Master Dater.

We spoke with Cyanide and Happiness co-founder Rob DenBleyker. He shared with us all you need to know about their latest game.

What Is Master Dater?

Master Dater is a comedy party dating game much in the stylings of Cyanide and Happiness type of humor. Like Joking Hazard or Cards Against Humanity, the point of the game is to come up with jokes using the cards given to you to score the most cards and become, in this case, the winning ‘Master Dater’.

To achieve this, players must win over the affections of ‘the sexy single’ by mixing and matching character parts from their hands of 3 heads and 3 bodies, all in order to create the perfect date. First, the sexy single draws three interest cards revealing 3 facts about themselves that the players must try to satisfy. These are often strange facts like having two dicks or being someone who destroys everything that they love.

Like Frankenstein’s Monster, the players will then need to create a partner to fulfill these needs, often in very funny ways, because it’s up to them to plead their case as to why their personal monstrosity would be the perfect partner. The sexy single then awards the player or players who best argued their case. Afterward, the sexy single role to passed on to the next player. 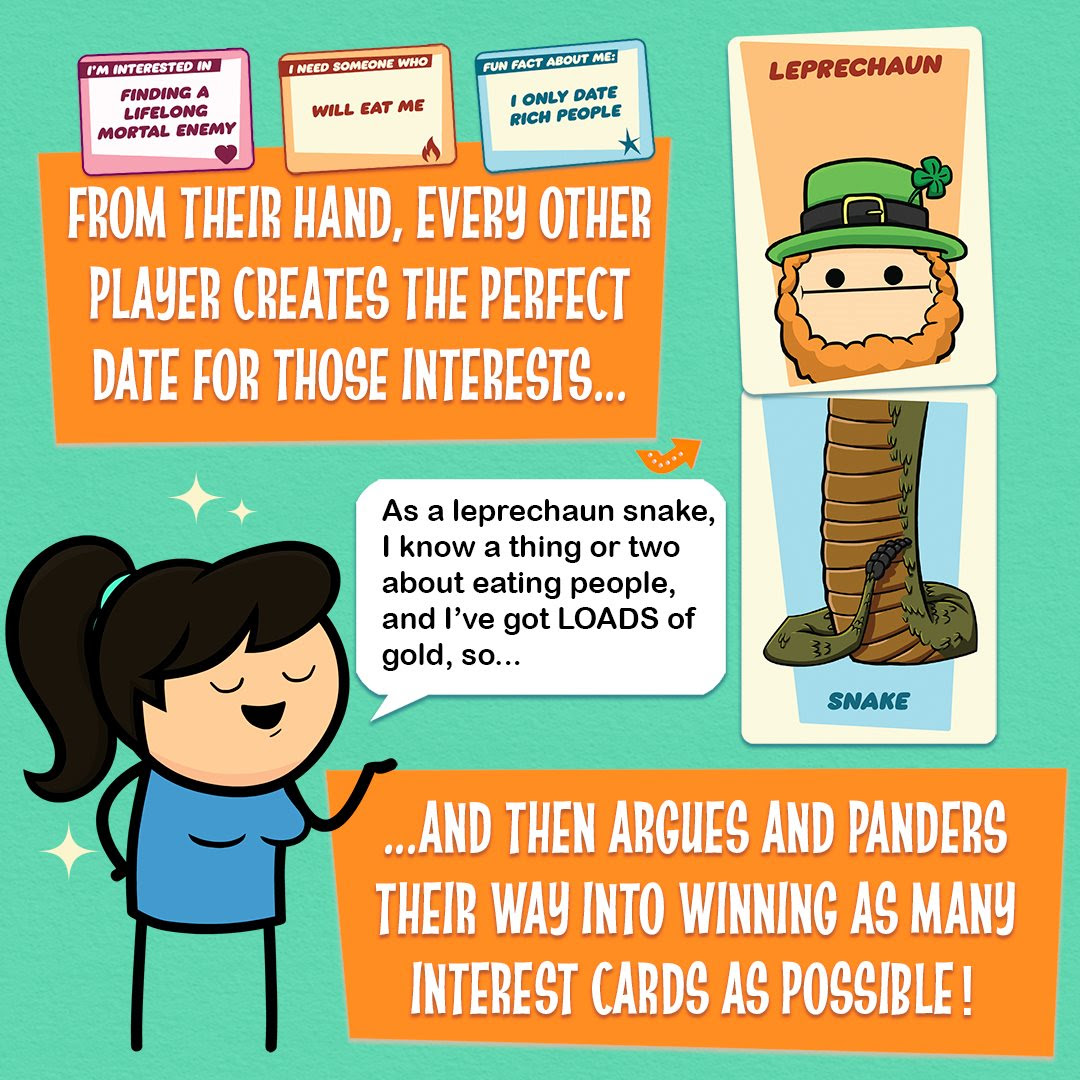 “This has been in development for a couple of years and the idea went through a lot of different genres,” revealed DenBleyker regarding Master Dater’s longstanding development. “We tried varieties of themes regarding the character creation element such as a courtroom drama, which was fun, but felt too open-ended. Shy players were sort of left out as others, sort of, dominated. Eventually, we settled on a dating game because it proved to be the most accessible as possible, and people generally had a good time.”

What’s best about Master Dater is the unique take on character creation elements as the game feels less restrictive compared to other card games, or for that matter, even Joking Hazard. The improvisation as to why their characters are what monstrosities they are and how that would be best to meet a date’s needs: are easily the funniest parts of the game.

Gameplay can feature 3-6 players and can go 40 minutes to an hour and beyond depending on how large the group is. Given the nature of the comedy, it’s highly recommended to play with a mature audience in mind, as Cyanide and Happiness can get dark regarding its comedy.

As part of the Kickstarter Campaign, Master Dater also has a series of rather funny digital shorts attached that sets up its premise rather nicely (seen above). There are 9 episodes in total the first of which is linked above. Given the fun premise, all-in-all, Master Dater looks to be a fun addition to the Cyanide and Happiness brand.

“That’s been our philosophy ever since,” said DenBleyker regarding how the team approaches game development. “We’re not trying to release a game every year or hit a quota. We’re just playing around until something sticks and makes us laugh. Then we develop it.”

At Gen Con 2022, C+H was also releasing a new joking hazard expansion set. They also revealed that there were 2-3 upcoming games now at various stages of development, some of which were still waiting on that single spark: that unique game mechanic to really make it click.

Previous article
Tokoyo: The Tower of Perpetuity Review – Cute and Challenging, a Quintessential 2D Platformer
Next article
What We Do In The Shadows Recap: The Wedding