The final game The Workprint checked out at Gen Con 2022, Cult of The Deep is what happens when you mix an array of D&D-styled dice rolling mechanics and blend it along with occultist themed-horror and cards. All for a terrifyingly good time that’s always challenging and never boring.

This combative game never relents regarding the numerous usage of dice rolls is a hidden-role player versus player game meant for 4-8 people. In it, characters secretly maneuver roles in order to either help or hinder, the cult’s faction’s rise to power. The faithful serve as those trying to protect the high priest. The cabalists, meanwhile, serve as those who are trying to kill them. Finally, the heretics are those that represent something in between, who want to be the last persons alive in this battle between the faithful.

What’s great is that the objective isn’t entirely clear as everyone’s roles are secret and randomly assigned. During a 45-60 minute match, every player will battle for control of rituals and mythical monsters though will spend most of it having no idea whose role is what. To make things even more complicated, every player also holds special roles according to their character, some of which, maybe self-centered or can be used to help or mess with each faction’s side. 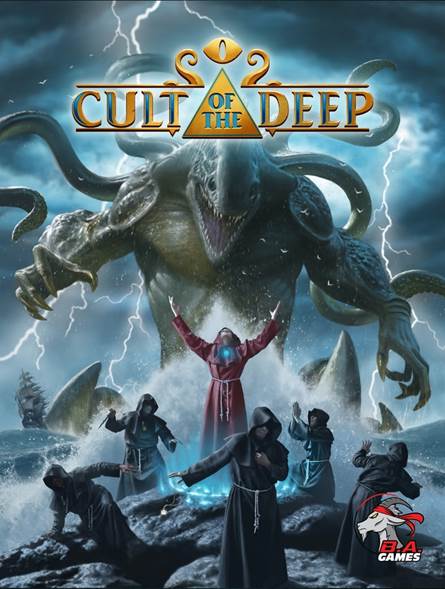 The game comes with 37 custom high-quality dice, 68 tarot-sized cards, and more. What’s neat for board game collectors, is that there are a lot of components to this game along with its dice, and the base cards are in fact, dual-layered so they’ll have a solid-weighted feel.

Just like in Bang!, players roll die to either heal themselves or one another, stab another, or use rituals to empower themselves with special abilities. Players can re-roll as many dice as they like twice. Each six-sided die has damage, double damage, heals, and then symbols associated with the costs used for rituals and special abilities. Whatever the player keeps at the end of their roll phase is then used in the commit phase.

Now, there are 4 unique rituals in the game set in the middle of the field. These magical fields can give benefits or hurt everyone depending on what’s in play. Atop of this, if a player is actually able to move a ritual counter to the end of their counters, they can actually hold onto any special keeper abilities that they maintain. There are also, many coin-based abilities players can collect and use in the middle of roll resolutions to affect the dice rolls of themselves or other players.

It can’t be stressed enough: that there are tons of abilities and active die-rolling and re-rolling in this game. Gameplay is broken down by the roll, commit (where you keep the rolls of certain die), response (when players respond to your committed dies and planned actions), and resolve (these commitments get executed) phases.

What’s neat is that almost every moment in Cult of The Deep feels actively interruptible due to the nature of the rituals and character special abilities, as there are so many opportunities for die-roll modifers from an opponent or ally. Atop of this, there is also a hidden sigil card in front of each individual player. These are one-time use items that are powerful spells that can seriously affect gameplay.

Interestingly, players can only reveal themselves when they die, but even then, they get the opportunity to become a wraith. Wraiths get a whole new set of cards and abilities, again, continuing to affect the playing field and die rolls.

The only drawback to this game is that though people try and be secretive about their role, unfortunately, sometimes it becomes rather obvious. Cabalists sometimes should just directly attack the high priest directly, especially, if they have a very damaging role like an assassin.

Still, given the unique characters and their abilities, atop of all of the active abilities in the ritual cards, the game is almost always active with so much going on that players rarely get to just sit there and wait. Keeping player engagement always high.

Cult of the Deep is available at several places online and at Walmart. It sells for 44.99

Previous article
What We Do In The Shadows Recap: The Wedding
Next article
Resident Alien Season 2 Episode 9: Autopsy Review