‘Game of Thrones’ And The Most Inappropriate Episode Title Yet

With an ending like that, I don’t want to hear anything about the Martell’s house words.

The sixth episode of the season and I’m starting to have major issues with Game of Thrones. Not only because of what happened (though I will discuss that), but because it feels as though the writers are playing on simply what they think we, as viewers, want. Oberyn Martell was a huge hit last season, so let’s travel to Dorne to showcase his babies. Surprisingly deaths seem to attract a lot of attention, so let’s kill Ser Barristan to force Dany’s hand. Oh? Everyone makes jokes about wedding in Westeros, let’s keep that trend going. “Unbowed, Unbent, Unbroken” did nothing to give me hope for Game of Thrones’ future.

Jorah the Explorer and Tyrion continue their Bro-trip through Essos, on their way to the Mother of Dragons, and Jorah is still insistent on keeping his greyscale a secret. However, the banter between him and the Imp is entertaining, though I yearn for Tyrion and Varys on the road once again. Tyrion lets slip the news of Jorah’s father, a death that occurred way back in season three, so you’d think the writers would have told him by now, but nooooooo people have to have their secrets. Iain Glen does a remarkable job of conveying Jorah’s emotions with only a few looks and like a true soldier, he bottles up his feelings (and diseases) and moves on.

The pair’s journey hits a snag when they run into a group of slavers, intent on selling Jorah and Tyrion’s baby Tyrion. Realizing that the slavers aren’t hitting on him, Tyrion talks his way into getting Jorah a spot in Dany’s newly opened fighting pits, and then talks his way out of dying, for the time being. 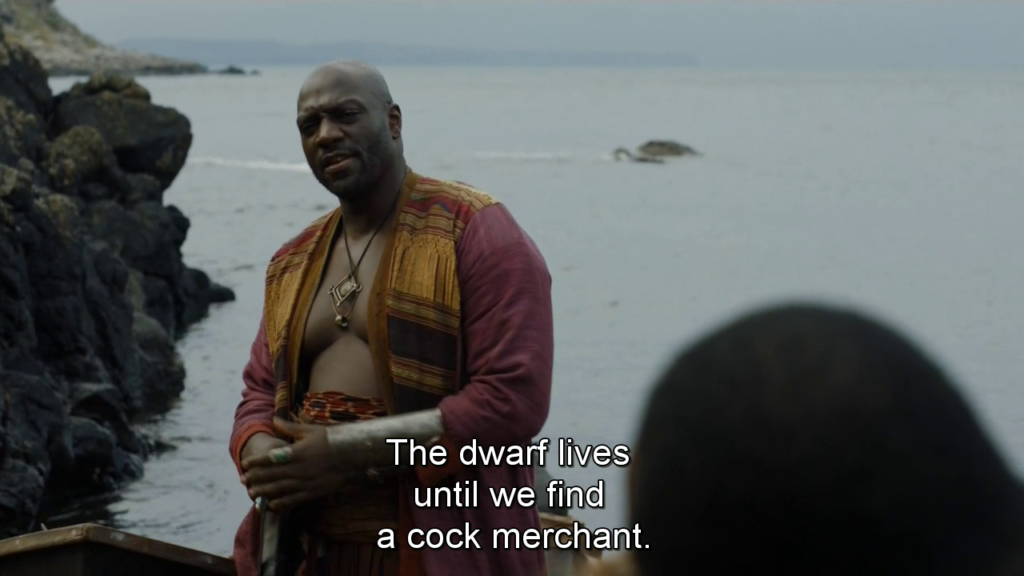 Faceless Man training grows a bit too stagnant (heh) for Arya’s liking and she becomes antsy to learn more about what they do with the corpses she painstakingly cleans. (Come on Arya, put two and two together. This is a BBB accredited establishment that prides itself on anonymity. You’ve literally watched a man change his face before your eyes. What do you think is going on with the dead bodies?) The Waif and Jaqen H’ghar teach Arya all about lying (and how she sucks at it). However, the Stark girl doesn’t stay honest for long as she convincingly spins a tale to a sick, young girl to spare her the agony of living. Impressed with Arya’s abilities, Jaqen finally takes her to the Room of Many Faces, telling her, “A girl is not ready to become no one. But she’s ready to become someone else.” FINALLY, AMIRITE?

What is going on down in Dorne? When HBO first announced that Jamie would be heading south for the winter, I thought, “Okay, maybe this is a nice change of pace, a good way to take an established character and introduce an entirely new culture through his eyes. Neat.” Now? It’s the most cringe-worthy plot of the season. And that’s including Tommen’s inability to rule Westeros. Still on the hunt for his niece, Myrcella, Jaime conjures up a clever disguise of bloodied guard’s robes to super stealthily sneak into the unguarded capital of friggin’ Dorne. Seriously, were the grounds opened that day because of a scheduled tour group? Oh, hey look. The heir to Sunspear and his betrothed, sister to the king of Westeros, are just here, chilling, unguarded, where any moron with one arm could just, oh I don’t know, take them. Surprisingly, Jaime and Bronn’s awful improvisation skills aren’t the worst part of Dorne. That title goes to the Sand Snakes.

I was excited when the Sand Snakes were cast into larger roles for the series. Badass women who fight with spears? Hell-to-the-yes. Instead, Game of Thrones took those women and made them into a caricature of Inigo Montoya. To top it all off, their fight scene was laughable. Someone get the choreographer from Daredevil up in here to show them how it’s done. And here I thought the worst part about the Sand Snakes would be the nipples on their armor. 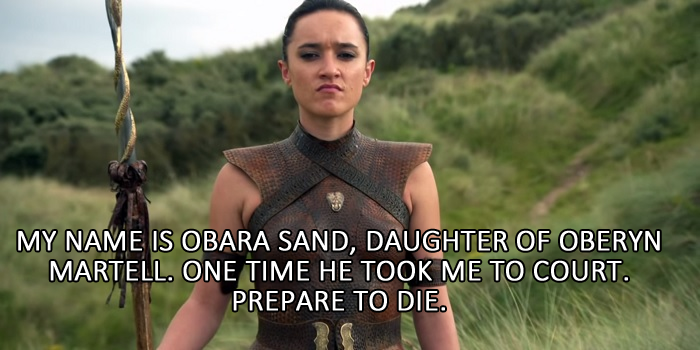 Littlefinger returns to the shithole that is King’s Landing because Cersei wants his assurance that he and the Vale are loyal to the crown. Why Cersei believes anything out of Littlefinger’s mouth is beyond me. We don’t need a Jaqen H’ghar slap to know that Littlefinger is lying. At least now we have a greater understanding of why he married Sansa to Ramsay Bolton–he wants to be Warden of the North. Though I doubt his ambition stops there.

Also returning to King’s Landing is our favorite Burninator from High Garden: Lady Olenna. Immediately upon entering the Red Keep, the Queen of Thorns brushes up on what she does best: insulting Cersei to her face.

However, Cersei was the one with the last laugh this episode as Ser Loras was put on trial for–sigh–being gay–something that isn’t considered a sin in the book canon; but hey, it seemed like a good idea since Ser Loras has been written as a gay stereotype, making both him and Renly out to be men who can barely control their sexual urges when around squires or stable boys. I recognize that imprisoning Ser Loras for his “perversions” was a way to get Margaery to perjure herself in front of the High Sparrow, but there are other ways to do so, ways that don’t involve character assassination. It’s appalling that they have taken such a strong character, one who mourned the death of his true love, one who was renowned as one of the best fighters in Westeros, and turned him into a joke.

Oh, and I can’t believe I’m going to say this but, Tommen? Sweetie, pumpkin, honey, dear…Joffrey would have slaughtered those Sparrows for touching his wife. Get it together.

I will say this much for the scene: Alfie Allen needs to get a damn Emmy. Sansa’s screams were horrifying and even though we saw nothing beyond her face, we knew what was happening. Then the camera panned to Reek, a man so beaten down that he has no choice but to obey Ramsay, and yet, there’s also this girl, this connection to the Theon Greyjoy from before, and she’s being abused the same way he was, and he’s powerless to stop it. He’s not watching her become a woman, he’s watching her become one of Ramsay’s playthings.

To keep myself sane for the time being I’m just going to remember Sansa in this episode like this:

So Bronn was definitely cut by a poisoned spear during that anti-climactic fight, yes? He’s going to die on Dorne. Dammit.

SERIOUSLY, TOMMEN. THAT IS YOUR WIFE.

The Room of Many Faces was much larger than I imagined, though I wonder how they get the faces down from the very top?

I miss Stannis. Please get to Winterfell soon to help out my girl Sansa.

WHERE WERE YOU BRIENNE?! YOU WERE SUPPOSED TO PROTECT HER.