‘Game of Thrones’ Review – “The Gift”: You’re Losing All Your Friends

Welcome back to Game of Thrones, everyone! After last week’s–sigh–ending, I didn’t have high hopes for “The Gift” but thankfully, I was pleasantly surprised. To be honest, now that the big events the show has been building toward are coming to fruition, it’s probably the best episode of the season.

After last week’, I didn’t want to come back to Winterfell. If it isn’t obvious, I’m on the side of not agreeing with the Sansa’s rape; I think it’s kind of ridiculous storytelling and this week did nothing to improve that impression. After being battered and raped nightly by Ramsay, Sansa finally decides to go to Theon for help and for a moment, I thought he might actually help her, but instead he tattles to Ramsay, leading the monster to flay the old woman loyal to the Starks and put her on display for Sansa and all of Winterfell to see what becomes of those who defy him.

I have issues with this plot for several reasons. Firstly, the biggest argument I’ve seen defending last week’s rape (besides hurr durr it’s Game of Thrones get over it) was that Sansa knew what she was getting into when she agreed to marry Ramsay. I think that’s crap because 1. Sansa didn’t know she was marrying him until Littlefinger cornered her and 2. She thought Littlefinger would be in Winterfell to protect her. Now, the show has been building up Sansa to be stronger; of course, she’s been much more of a slow burn in her growth, especially when compared to sister Arya. However, Sansa isn’t stupid. If she knew she would be raped and abused like she has been, wouldn’t she have used the candle in the tower signal sooner? Instead, she uses it like a last resort, a struggling girl who has no other hope for salvation. It just feels like they’re putting her back into the shoes of that little girl who was engaged to Joffrey. I hope the show eventually proves me wrong.

Another reason I’m concerned by the plot is that Roose straight up told Ramsay to stop flaying people because he needed the support of the North. And that flaying? That was gruesome as hell. More to the point, Ramsay may have wed Sansa Stark, but I find it really hard to believe Roose, a shrewd man, would let Ramsay turn her into a play thing. Granted, she’s been fully covered and locked in her room, so maybe that’s the point. Roose hasn’t seen her. All I know is that at this moment, Dany sums up how I feel watching Sansa’s story in the north:

Also, Brienne, you’re only there for the cameos at this point. Either go in and save Sansa or head back to King’s Landing where it’s warmer because at this point, ain’t nothing going to happen with you vacationing in an inn for WEEKS.

Things aren’t going well for Stannis outside Winterfell either. The snow storms have arrived and he’s losing horses and sellswords faster than Melisandre can burn sacrifices. Speaking of her hobbies, Melisandre seems to have some doubts about Stannis’ march on Winterfell and wants some “insurance” in the form of king’s blood. Shireen’s blood. Thankfully, Stannis is all, oh no you didn’t and kicks her ass out of the tent because if anything happens to that girl heads are gonna roll. That being said, it’s these little inconsistencies that bother me most about the show. Melisandre used leeches with Gendry’s blood to “kill” the usurpers Robb Stark and Joffrey Baratheon. No mention of Balon Greyjoy who, I presume, is still chilling on Pyke. Not gonna mention that missed one, eh, Mel? If leeches from a bastard were potent enough to kill kings, why would Melisandre need to sacrifice Shireen? It doesn’t make sense to me.

Jon leaves the Wall in the hands of a man who hates him, surrounded by crows who despise Jon’s decisions to save the wildlings and on a scale of One to Ned Stark levels of stupidity, this feels at least on par with Robb bringing his pregnant wife to the Twins. But hey, them Starks and their honor. I admire Jon’s decisions but he’s too trusting. Stannis wouldn’t trust those assholes with his wife’s fetus jars. And if all that wasn’t enough, poor Aemon Targaryen bites the big one, leaving Sam and Gilly all alone. 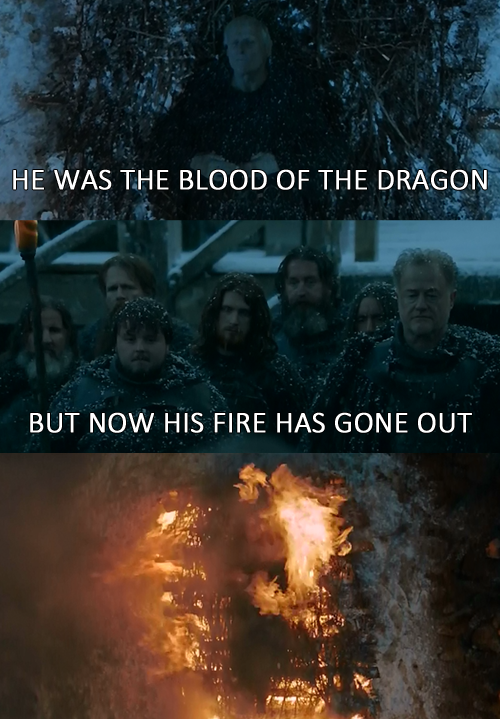 They run into some issues with–sigh–“men” of the Night’s Watch who take Snow’s absence as a sign that they can just start raping and killing people. And look, I get that you want to show me that they aren’t nice men, probably much like their mutinous counterparts at Craster’s Keep, but come on. Have them do something else to make them seem villainous. Sam can even still get his ass kicked if you deem it so necessary. As a viewer, it’s just not entertaining to constantly watch women get nearly raped and men portrayed as monsters who want to screw and kill any time leadership disappears. It isn’t a very pleasing for either sex, but whatever. Ghost shows up, awesome as ever, and protects the duo so they can then finally seal the deal and admit feelings toward one another. Sam does his best Winnie the Pooh impression during the act and I couldn’t help but laugh. Seriously though, he’s sweet.

Dorne AKA worst plot in the show

After the debacle that was last week’s rescue attempt, Jaime tries to have a heart to heart with Myrcella and she’s all, “Oh my god, you aren’t my dad, go away.” And he’s all, “Well, actually…funny story… but seriously, come with me. We need to talk with your mother.” 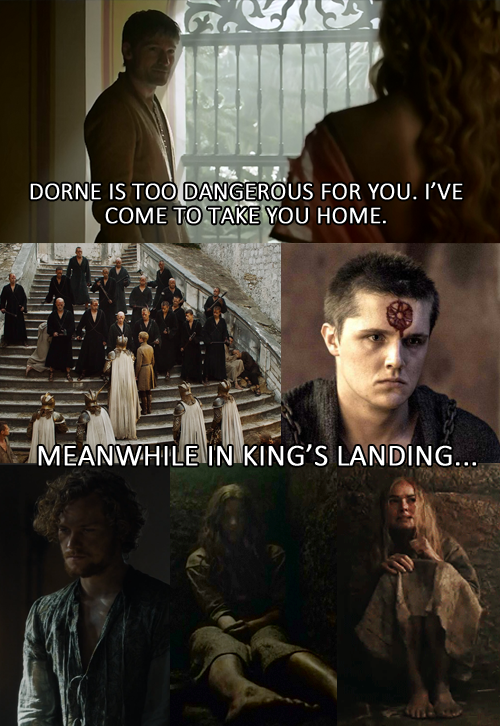 Jaime may get the fancy digs but poor,  poisoned Bronn gets a dungeon cell conveniently across from the imprisoned Sand Snakes. One of them remembers that the show has a sexposition quota to fill and if they don’t show boobs soon they might get cancelled. Tyene takes one for the team and undresses in front of Bronn who, ugh, like all men in the show it seems, becomes comically tongue-tied at the sight of her body. I realize she was attempting to raise his heart rate to spread the poison faster and then give him the antidote, but I’m just wondering, why? What did either of those scenes accomplish? Nothing. Use this time for another plot.

Things aren’t looking so good for any of the high-born families in King’s Landing. Tommen, frustrated that no one is listening to him, turns to Cersei for help. By now, I can’t help but think they want to portray Tommen as a bumbling fool. At least Joffrey had the sense to distrust some of Cersei’s dealings. Tommen turns to her and bad things happen over and over and over again, and yet, he is still naive to her ways. And that’s three weeks in a row of me comparing Joffrey to another character in a favorable light. What is this Westeros coming to?

Cersei, to follow through on her promise to Tommen, visits Margaery in the black cells of the Red Keep. It goes about as well as you would expect it to and Margaery is having none of Cersei’s polite bullshit and she loses her cool, tossing perfecting good day-old venison at the wall. Margaery may think she is the Queen of the subtle burn, but Cersei has years perfecting the art:

It may be the Tyrells who have the last laugh because just as Cersei sees herself at the height of her genius, the High Sparrow is there to bring her down about a dozen pegs. The Queen Regent, struggling to maintain a calm facade, doesn’t believe things are that dire until cousin/lover Lancel makes an appearance. Her descent is a thing of beauty, brought down by a man in rags and bare feet, and Lena Headey (as well as her queen counterpart, Natalie Dormer) acts out the scene beautifully. I’m sad to see my favorite character shackled and jailed, but I won’t deny that she deserves it.

Dany and Daario share a sweet moment post-coitus and she’s all, “Don’t fret, D, you’re still my number one boo. This Hizdahr dude is just ’cause my dad’s making me.” And Daario gets jealous and for like 5 seconds I find him cute. But then I remembered I still don’t trust his sleazy, murderous ways, so my brain put to a stop to that nonsense real quick.

Speaking of Hizdahr, he decides to take Dany on an uber romantic first date, a local tournament fight to the death, under some guise that it’s tradition and Dany’s like, “God, I hate all of your traditions.” But hey! Jorah I’m-definitely-not-infected-with-greyscale Mormont finally gets to swing his sword around to remind Khaleesi what she’s passing up. 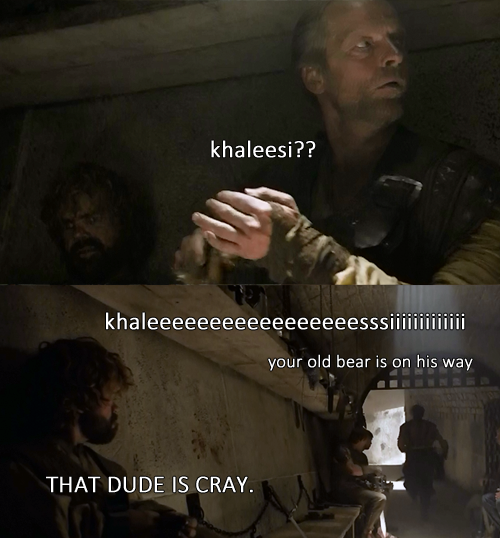 Jorah’s skilled in many areas, namely perfecting the scruffy look, but he is horrible at wooing a woman. Tyrion, at least, may be able to save his life with his charm and fearless ability to shout his well-known name. After nearly a season of traveling (because he refused to book through Littlefinger’s Travel Agency), Tyrion finally comes face to face with the Mother of Dragons. And everyone shouts with glee.