‘Game of Thrones’ Review – “The Dance of Dragons”: WHY STANNIS WHY

After last week’s thrilling episode, “Hardhome“, I thought it would be difficult for Game of Thrones to reach that excitement level again this season. While “The Dance of Dragons” didn’t quite match up to the icy White Walker massacre in the north, it did give us plenty of fire to keep us warm until the final episode. (Eh? EH? Oh, alright. I know it was cheesy.)

Get your oysters, clam, and cockles! Arya continues her sales job and Ned’s head is rolling in his grave that a daughter of his got suckered into a seafood pyramid-scheme. As part of her Faceless Man training, Arya has to poison the Thin Man with her oysters, but things get a bit slippery when Mace Tyrell and his guards arrive in Braavos. Their arrival isn’t as grand as one would expect, given that he is an envoy for the crown of Westeros. But hey, the crown is so in debt they should probably file bankruptcy, so it’s not like the Iron Bank is going to make them feel welcome. Meryn “fookin'” Trant gets off one of the boats and Arya’s death list flashes before her eyes. She follows him around town with her cart of oysters, as one does when trying to be stealthy, and ends up in a brothel. Meryn Trant seems to recognize Arya for a moment but then carries on with his nonchalant, disgusting pedophilia while Arya returns to the House of Black and White and lies to Jaqen about her whereabouts. 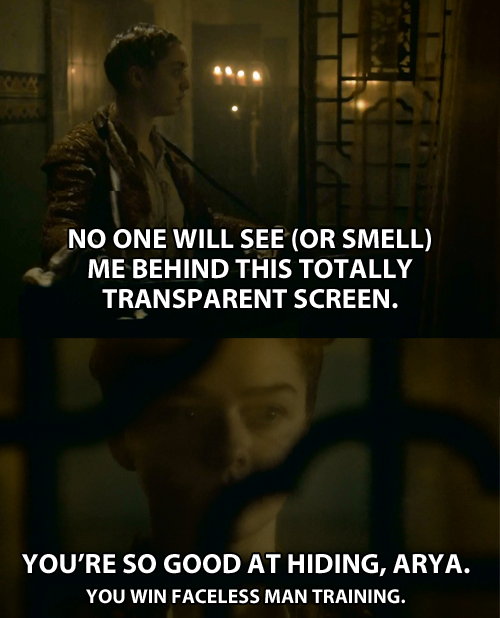 Jon returns to Castle Black with a few hundred new friends and the brothers of the Night’s Watch aren’t exactly pleased about it. Alliser Thorne warns Jon about his good heart and then Olly gives him the stink eye, which doesn’t bode well for the Lord Commander. Even Sam “I know less than Jon” Tarly suspects something is up. A side note: I’m not sure why Jon decides to bring the wildlings in through the north gate. Let’s take a look at the map, shall we? 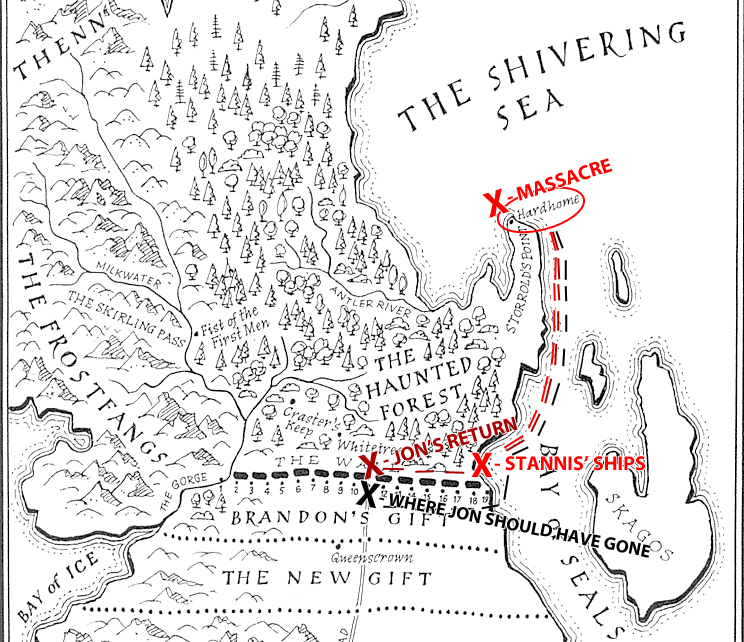 Why in the world, with white walkers chasing him, would Jon willingly return Stannis’ ships back to their original position (like it’s some kind of car rental situation), and risk walking through the snow NORTH OF THE WALL, when the group could have traveled more safely south of it? (And also putting Stannis’ ships in a better location.) You know nothing, Jon Snow.

WHAT THE WHAT JUST HAPPENED.

It looks like Ramsay and his twenty good men get the job done by burning down most of Stannis’ supplies and horses. I can’t say I’m surprised Stannis gets desperate and goes along with Melisandre’s burninating plans; this is the man who murdered his brother because he believed it was his right to take the throne by any means necessary. It’s not like he gets sound advice from the Red Woman.

Sadly, Shireen’s death has been foreshadowed for a long time now. Selyse talks of burning her daughter every chance she gets and once Davos gives the princess a gift and shares a sweet reading moment, we knew her fate was sealed. (Noticing a trend?) I’m making light of this death because frankly, I’m devastated. Shireen’s death has hit me harder than any other on the show. Not only because she was a young girl, but because of all the characters, she was a ray of sunshine, a beacon of hope that there is goodness in the world and maybe, just maybe, the good guys have a chance of winning. Alas, Melisandre came in like a wrecking ball and set fire to the joint. Stannis stands there stoically as his daughter, his heir, burns to death and it’s Selyse “I keep dead fetuses in jars” Baratheon who stands up and says, “Whoa, this is wrong. Stop this.” If SELYSE thinks something is fucked up, you take that to the bank and reconsider whatever it is you’re doing. But Stannis doesn’t waver in his decision-making and on he goes to fulfill a destiny.

FINALLY we get to see something in Dorne worthwhile. The whole plot is still the worst on the show, but at least show watchers now get to appreciate the glory that is Doran “The Dude” Martell. He’s basically the love child of Ned Stark and Tywin Lannister so that means he’s probably got about three episodes into season six before biting it. He agrees to return Myrcella to King’s Landing and in exchange, Trystane will join her to keep their betrothal in tact. Bronn gets an elbow to the nose but otherwise is allowed to leave the dungeons unscathed. The Sand Snakes prove to be even more useless as they slap fight in their cell. Jaime sits there and looks pretty.

Ellaria Sand, however, becomes more interesting. She still loathes the Lannisters but as she empathizes with Jaime’s romantic struggle, I found myself liking her more. She knows she made a mistake going against Prince Doran’s wishes, and swears her fealty, but I’m not entirely sure I believe she’s done getting revenge against the Lannisters. That being said, no one has died in Dorne yet, so the sandy home of poisonous snakes and vicious spear-wielders is currently the safest place in the world.  They’ve stayed true to their word–not a single little girl has been harmed thus far in Dorne.

The grand re-opening of Meereen’s fighting pits is finally here and Dany could not care less about watching men die for sport. After five seasons of Game of Thrones, I share her sentiments. I’m beginning to tire of watching people die so I really hope she makes it to Westeros soon to bring some hope to the people. And fire to the White Walkers. Tyrion joins Dany and Hizdahr at the festivities and while arguing with Hizdahr over tradition, we see how much the two have in common. Bringing them together puts everyone else in the world at a disadvantage and I, for one, am completely okay with this development.

Jorah makes his appearance in the fighting pits and I’m reminded of how much I love the scenes between him and Dany, sharing poignant moments full of emotion without words. I know he’s old, hairy, and slightly creepy, but just let me ship them until Jorah evolves into Golem, okay? Ser Jorah puts on a good showing and with some luck, manages to win his match. One thing that surprised me during this scene was how likable Daario was. Usually he’s an annoying fly, buzzing around Dany and whispering terrible things in her ear, but standing guard over her, he knows how much the old knight means to her and rightfully tells Hizdahr to shut his mouth when he tries to hurry Dany into allowing the fight.

It is after Jorah’s victory, however, that all hell breaks loose and suddenly the Sons of the Harpy have Dany and Co. surrounded. The ineptitude of the Unsullied continues as they take on the role of storm troopers, turning their backs to the enemy, and dying left and right. Maybe Dany should ride Drogon back to Astapor and get a refund. However, this chaos did give us one of the, I think, most beautiful moments of the series:

The happiness I felt at the reunion was short-lived as the Sons of the Harpy murdered Hizdahr (didn’t see that coming) and then surrounded Dany and her council in the middle of the pits. It looks hopeless for the group–it’s not like they can trust the Unsullied anymore–and just as Dany resigns herself to her fate, Drogon makes an explosive entrance. In one of the most exciting scenes of the series, Drogon protects his mother from the Harpies, and then Khaleesi climbs on his back and rides off into the fiery sunset. I think there’s a reason she gets all of the best scenes.

I know Stannis is incredibly rigid in his leadership, but why, oh why, would he not have used Mance’s blood to help him win Winterfell? Bring him along for the burninating just in case? Burning his own daughter in front of all of his men can’t exactly inspire that much devotion. If he’s willing to sacrifice his own child, why would he care about their lives?

Davos is going to be so mad and I think this might be what finally drives the two apart.

I saw Brienne in the promo for next week. Here’s hoping she FINALLY does something.

It was really cool that Dany was able to ally herself with the Jedi before the Sons of the Harpy attacked. 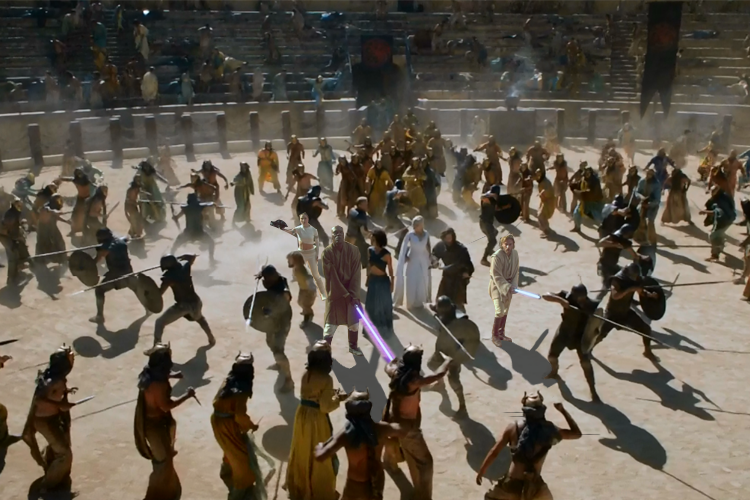