‘Game of Thrones’ – “High Sparrow”: Hold My Crown, Things Are About To Get Dirty

Three episodes in and Game of Thrones’ fifth season seems to be setting up all the cards so that in a few more weeks someone can come in with dynamite and wreck up the joint. In every corner of the world the characters are plotting, doing what they can to outlast the other players. In some instances the idea of revenge makes me happy, but for the most part I’m just terrified of what may happen to the ones I love. *cough* Sansa *cough*

After finally gaining entrance into the House of Black and White, Arya Stark soon learns that Faceless Man training isn’t all sword fights and murder. Jaqen handles her bravado with ease and responds with a bemused, “No? Why come then?” This is Arya’s struggle for much of the episode. Much like Daniel-san, she wants to attack, to kill, to get revenge, but Mr. Jaqen Miyagi wants none of her teenage attitude and tells her in order to become a Faceless Man, she must become No One.

Becoming No One requires Arya to strip herself of everything she knows and owns. Most things go willingly–the clothes, coins, the name–but when it comes to throwing away Needle, the last tie to her family, she cannot bear to do so and instead hides the sword away for safe-keeping. Unlike most others, I haven’t been as invested in the Arya arc. Her story is a common one in fantasy novels, so I don’t get as excited as I do about, say, Sansa. However, this was a particularly tough moment for me, watching this young girl who has learned from the likes of Tywin Lannister, the Hound, and everyone else around her; the young girl who has hardened herself to any emotional attachment cannot bear to part with a sword. There’s a passage from A Feast For Crows that can explain this much better than I:

“It’s just a sword,” she said, aloud this time . . .
…but it wasn’t
Needle was Robb and Bran and Rickon, her mother and her father, even Sansa. Needle was Winterfell’s grey walls, and the laughter of its people. Needle was the summer snows, Old Nan’s stories, the heart tree with its red leaves and scary face, the warm earthy smell of the glass gardens, the sound of the north wind rattling the shutters of her room. Needle was Jon Snow’s smile. He used to mess my hair and call me “little sister,” she remembered, and suddenly there were tears in her eyes.

For the first time in, well, since the show began, we saw a wedding that didn’t end in tragedy. Tommen and Margaery wed, had lots of awkward, fast sex, and of course, managed to annoy the pants off Cersei. (You aged him up, HBO, but he still looks like a baby next to Natalie Dormer.) Margaery certainly knows how to mold Tommen’s emotions, and the scenes between the two women clamoring to be queen are electric, each exchanging jabs with a smile. Cersei asks if Margaery is intelligent, because she can’t quite tell. Margaery laments their lack of wine for Cersei, but alas, they do not have any as it’s so early in the day. Margaery even gets in the final blow with asking how to address Cersei, a reminder that Margaery is now queen and Cersei is an afterthought, or even worse, a soon-to-be-grandmother. As the Lannister woman leaves, she hears Margaery and her handmaidens laugh and you know Cersei won’t let such an insult rest.

Still fuming, Cersei sits on the small council with all of her friends when the High Septon approaches with grievances over his treatment by the Sparrows. When Qyburn makes mention that the High Septon was found in one of Littlefinger’s brothels, Maester Pycelle jumps in with, “A man’s private affairs ought to stay private” and Cersei’s face afterwards only confirms my affections. 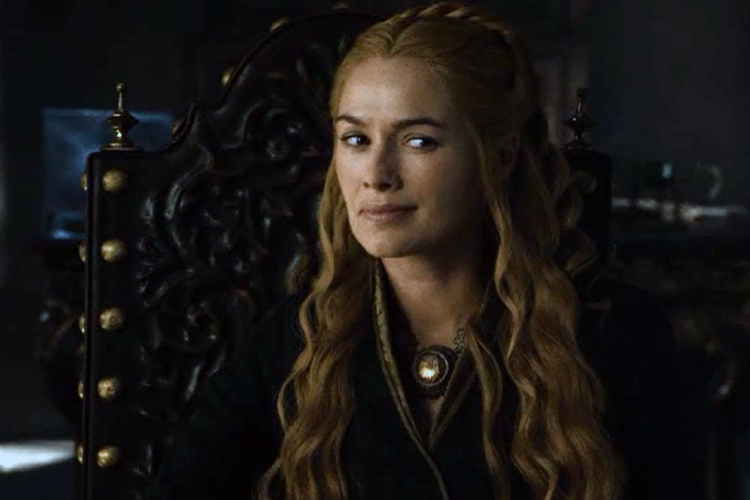 Also, did anyone else get chills when Cersei told the High Sparrow, “The faith and the crown are the two pillars who hold up this world”? Cersei is very quickly losing the crown power to Margaery, so now she is advocating for power from the faith.

OH MY GOD. WINTERFELL. How long has it been? You don’t write, you don’t call…

Unfortunately, there isn’t a Stark sitting in the hall of Winterfell and instead it’s that Bolton bastard, Roose. Baby Bolton bastard, Ramsay, has just had a run-in with Lord Cerwyn for refusing to serve a Warden of the North whose name is not Stark. Ramsay, of course, finds his flayed corpse hilarious. Roose, on the other hand reminds Ramsay that if he kills everyone he comes across, the North will revolt and the Boltons will be outnumbered and probably flayed, so instead he must marry to secure their allegiance.

Which leads us to an image of Sansa Stark outside Moat Cailin, heading north to Winterfell. Shockingly, Littlefinger has abused her trust once again and for a moment we see the younger Sansa lash out in a childish manner. Littlefinger puts on the creepy charm, oozes manipulation from all pores and reminds her that as the wife of the Warden of the North, she will have power, and power brings revenge, and then the young Sansa fades, replaced by Darth Sansa, the girl with dark hair who is learning to play the game.

When the traveling pair arrives in Winterfell, Sansa wears the pleasant mask, showing little sign of the hatred she harbors in her heart. However, the servants in Winterfell show no such hesitation when talking to Sansa, reminding her that “The North Remembers.” Also putting on an act is Ramsay Bolton and it’s frightening how well he plays the innocent school boy. 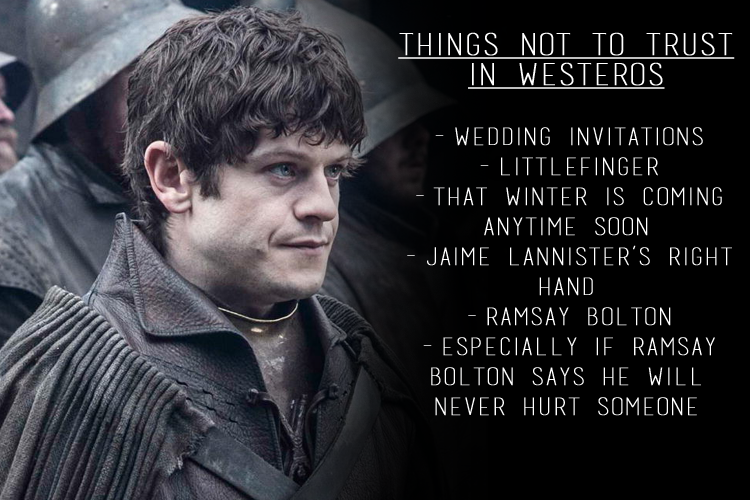 Brienne’s chapters were some of my favorite in the books, quiet but powerful emotionally, and it’s beautiful to watch her slowly peel back that rough exterior with Pod. Brienne knows who she is; she knows people mockingly call her “Brienne the Beauty”; she knows she is neither Knight nor Lady, but none of that matters, because she has honor. Loyal is the best way to describe Brienne and once her loyalty is earned, it stays for life, as is the case with Renly Baratheon. She has not forgotten his death or who was responsible and sadly tells Pod, “Nothing is more hateful than failing to protect the one you love.”

Which leads us to a not-so-subtle scene change to Stannis in the north. Stannis wants Jon Snuh to become Jon Stark so he can garner the support of the north and presumably go shopping together without it being a scandal. However, Jon is now Lord Commander and his loyalty is to the Night’s Watch and Stannis doesn’t admire the Stark honor in him that also got Ned and Robb killed so he leaves. Davos then continues his ongoing good cop to Stannis’ bad cop routine and explains to Jon that Stannis respects him and without Jon and the wildling support, the north is lost to the Boltons and there will be no realm left to protect if the latter should continue to happen.

Jon and Stannis also shared an exchange I enjoyed:

Jon: “I’ve heard it was best to keep your enemies close.“

Stannis: “Whoever said that didn’t have many enemies”

Later on, Jon continues his commandering, sending Crows off to latrine duty and even offering Aliser Thorne a strong leadership position as First Ranger, earning more respect from his brothers. Finally, he gives Ser Janos Slynt command of Greywatch, who of course throws a hissy fit, so naturally Jon has to chop off his head. As one does. I jest, but it’s actually one of Jon Snow’s finer moments and as much as I hated the whiny baby Snow, Lord Commander Snow is quite endearing. Stannis certainly agrees.

And since I’m quoting the books tonight, I’ll throw in another fantastic set of quotes:

“Sansa stared hard at his ugly face, remembering how he had thrown down her father for Ser Ilyn to behead, wishing she could hurt him, wishing that some hero would throw him down and cut off his head. But a voice inside her whispered, There are no heroes…”  SANSA, A CLASH WITH KINGS

“The smile that Lord Janos Slynt smiled then had all the sweetness of rancid butter. Until Jon said, “Edd, fetch me a block,” and unsheathed Longclaw.” JON, A DANCE WITH DRAGONS

There’s really no good to sum up the interaction between Varys and Tyrion. Each week, the actual plot is nothing too exciting, but the dialogue, the chemistry is the best on the show. I could watch the pair bicker for the entire hour. Though Tyrion’s jab about wanting to talk to someone with hair was a bit below the belt. Tyrion’s superiority complex gets him into trouble, exactly as Varys warned. I’m not sure what he was thinking, openly talking about once being a wealthy man who “always paid his debts.” Come on, man. You weren’t this stupid before crossing the Narrow Sea. Is there more in the water besides Greyscale? The King of the Friendzone (Jorah Mormont) shows up, binds and gags the drunken sod who only wanted to see faces other than Varys’, and proclaims he is taking the dwarf to the queen. And darkness.

There’s a Red Priestess in Essos who sings Daenerys Targaryen’s praises? There’s definitely more to this and I’m intrigued to see where it goes.

The girl who shot daggers at Sansa when she entered Winterfell? We’ve seen her before and she’s a “friend” of Ramsay’s, a sadistic one who enjoys hunting. I am frightened to think of what her jealousy will make her do to Sansa. 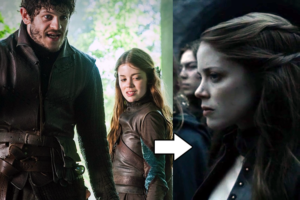