‘Foxcatcher’ Review: The Agony of Defeat 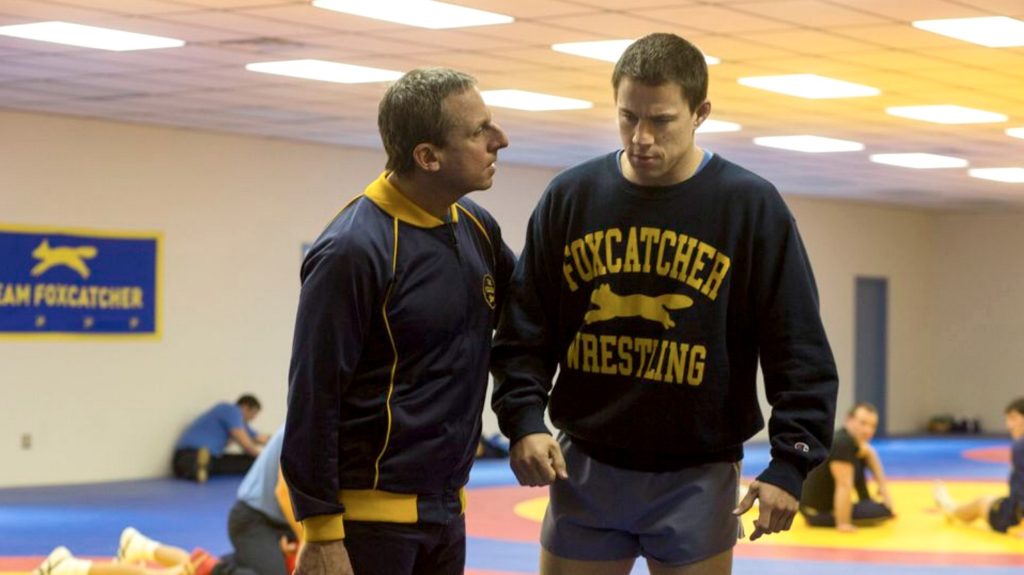 Wrestling is more than just a sport in director Bennett Miller’s newest film Foxcatcher, a bleak and harrowing true crime saga focused on the strained relationship between two Olympian brothers and the eccentric tyrant who vows to fund their glory. It’s also an apt metaphor, rife with possibility for a story seeping with admirable thematic ambition. As the reluctant hero grapples with a sometimes exhilarating, often devastating personal journey, it makes sense to align his psychological plight with his physical one. Unfortunately, a consistently desolate tone and lurching pace mount tension so unevenly that when narrative gut punches are finally struck, they don’t land as deep as they should. While an arguably just resolution does help cushion the heartbreaking climax, Foxcatcher is often far too dreary to rouse genuine cheers. But its haunting depiction of ruthless desperation and maniacal greed will leave you undoubtedly pinned.

Channing Tatum turns in dedicated and fascinating work as Mark Schultz, a 1984 gold medalist determined to perpetuate his athletic momentum but painfully unable to resolve or even acknowledge his gaping emotional and social deficiencies. Mark’s charismatic and gregarious older brother, Dave (Mark Ruffalo), by comparison, is an equally decorated wrestler but also able to maneuver cultural expectations and personal relationships with an ease Mark finds simply foreign. Despite boasting nearly identical prowess on the mat, Mark finds himself constantly fighting to escape Dave’s shadow in every other aspect of life. 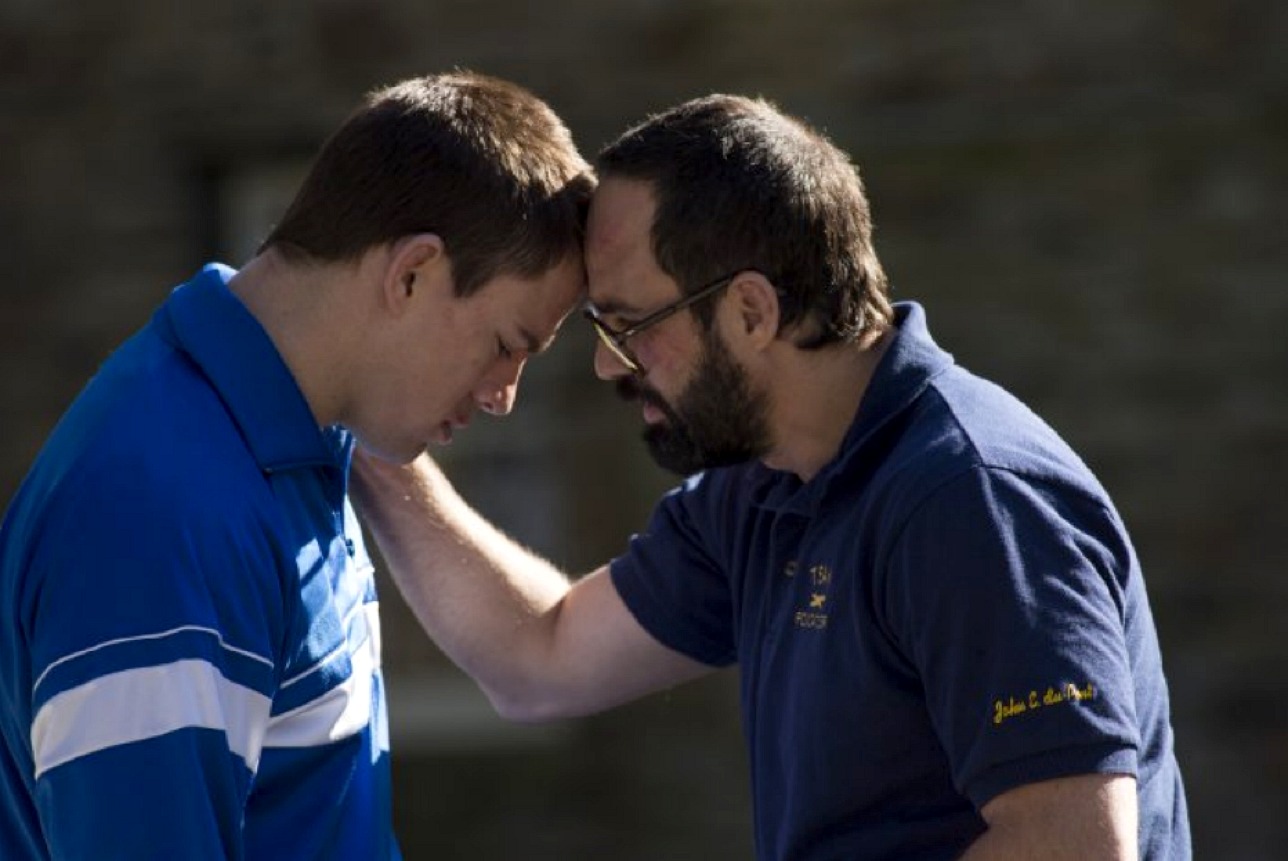 The film opens as the1988 Seoul Games loom near, but while Dave feels fulfilled as an invested husband, father and coach, Mark yearns to continue his career and strive for further Olympic success. His brooding persistence makes sense. Watching Mark silently gulp instant noodles at his barren kitchen table, we learn quickly that wrestling is all he’s ever really had, or known.

When multimillionaire wrestling enthusiast and certifiable weirdo John du Pont (Steve Carell, every bit as creepy and unrecognizable as you’ve heard) sends the brothers an unexpected invitation to live and train full-time at his estate, well, it’s an offer the younger Schultz simply can’t refuse. Dave is understandably dubious and unwilling to uproot his family, but Mark happily packs his meager belongings and sets forth for Foxcatcher Farms, a sprawling property near Valley Forge teeming with the kind of musty, old money glut the du Ponts display proudly as self-perceived pillars of exceptionalism. This hushed but powerful commentary on class warfare and elitism weaves ribbons of historical insight throughout Foxcatcher, as the relationship between Mark and his new benefactor bobs and weaves across a multitude of questionable boundaries before reaching levels both disturbing and sadly irrevocable.

Mark is initially wooed by du Pont’s declarations of loyalty and patriotism, and especially his inexplicably dogged desire to position Mark as the key to achieving his twisted American dream. “What is he getting out of this?” Dave asks Mark incredulously, after Mark relays du Pont’s promises of more material security than either Schultz has ever seen, all in exchange for victory in Seoul and the upcoming 1987 World Wrestling Championships. “Winning,” a stupefied Mark scoffs. “America. Winning.”

Du Pont’s pitch about the country’s “failure to honor” athletes like Mark drips with delusional, nearly seething entitlement to an objective listener, but the vulnerable Mark is awestruck at the notion of being truly understood for perhaps the first time in his life. Foxcatcher is at its core a bizarre love triangle of sorts, particularly once du Pont does finally convince the pragmatic, genial Dave to join Team Foxcatcher after all. “You can’t buy Dave,” Mark had first told him, leaving du Pont quizzically agape. As far as he’s concerned, everyone has their price. What he fails to grasp is the importance of value that isn’t measured in dollars, and Dave’s concern for his brother is a gold mine of sentimental worth even du Pont money can’t reach. 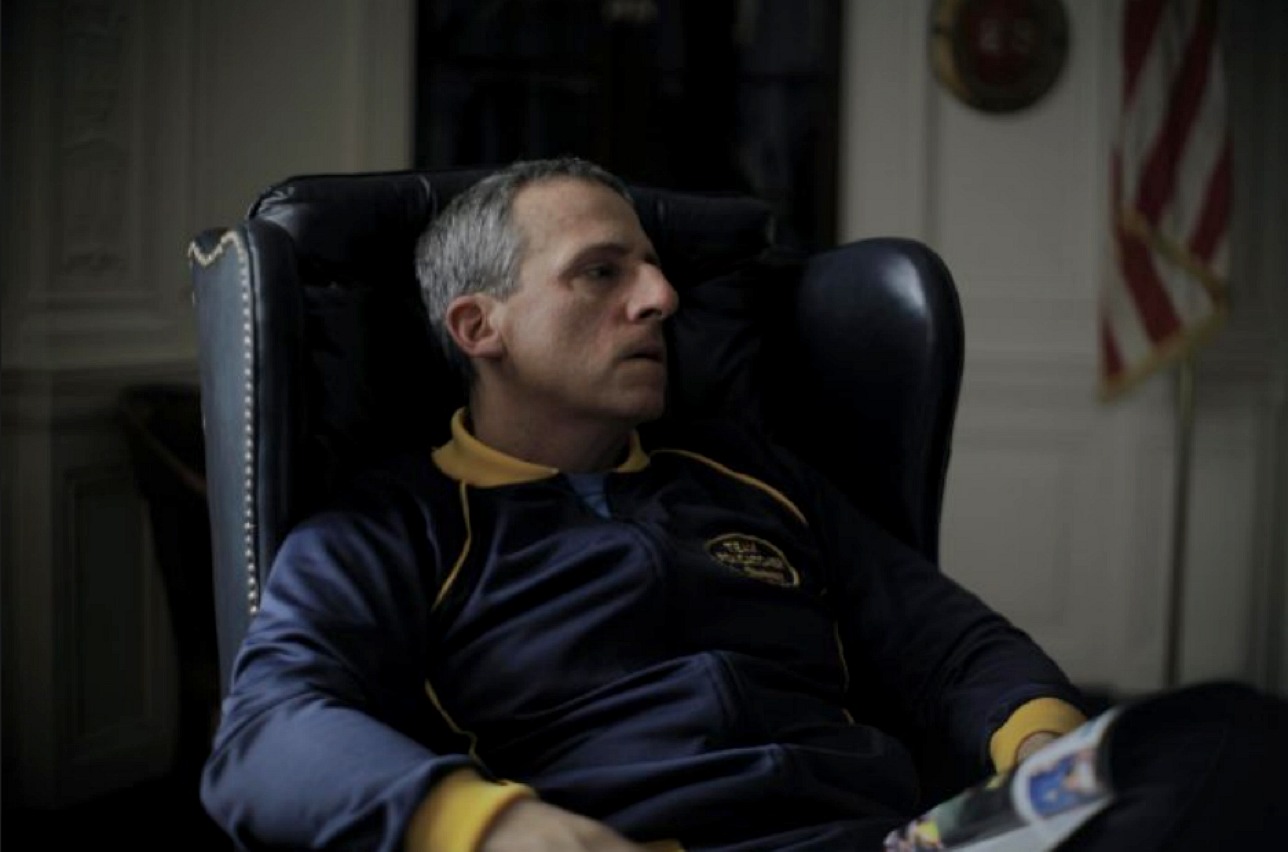 Dave provides the trio’s, and the movie’s, sole example of an honest, rational existence, and both his brother and boss resent him for it. Neither Mark nor du Pont possess anything resembling the instinctive knack for finding true contentment beyond a trophy case or bank statement that Dave does, and watching both men overcompensate their shortcomings with increasingly unhinged behavior pits Foxcatcher in an unwinnable match. It’s the strange, dual-ego dichotomy between Mark and du Pont that drives the story forward, despite a laboriously illustrative script (from E. Max Frye and Dan Futterman) that leaves at least one crucial confrontation curiously missing from both the page and screen. These two misfits are of few words, and even fewer means of expressing themselves. It’s not surprising to witness either Mark or du Pont devolve into raging id, but when one’s explosive self-hatred eventually claims a victim other than himself, Foxcatcher is left floating aimlessly in its own aftermath.

While Mark and du Pont’s wildly different backgrounds represent their conflicting social extremes, it’s what they have in common that ignites their initial camaraderie and functional, if unnerving, working relationship. Mark’s stated goal “to be the best in the world” aligns congruently with du Pont’s maniacal diatribes, in which he truly fancies himself a gifted wrestling coach, mentor and role model. Although he coerces Mark to refer to him as a father figure in public speeches, Mark’s lumbering, dead-eyed presence makes it clear du Pont had found himself an ideally moldable protégé. Poor Dave has no choice but to helplessly watch the dysfunction unfold. The audience will likely relate.

Foxcatcher is a cold, stifling experience that somehow still enraptures in light of its aching unpleasantness. The effect is intentional. Miller demonstrates a spellbound fervor with the real story of the Schultz brothers and John du Pont that elicits comparison to his vision of Truman Capote’s work researching In Cold Blood in 2005’s Capote. The director’s deliberate, nuanced attention to detail produces results not unlike a powerful headlock, but what will keep viewers most fixated are the altogether magnificent performances from Carell, Tatum and Ruffalo. The actors have rooted these characters so deeply they defy the impressive physical transformations and achieve something truly transcendent. Their work, especially Carell’s, will almost certainly summon visceral repugnance, but it’s these strong reactions that will carry viewers across the film’s otherwise meandering objectives. Nonetheless, Foxcatcher stays with you. Its primary motive may, in fact, align best with that of a wrestler’s: it knocks you down first, but what it does best is keep you from getting back up.