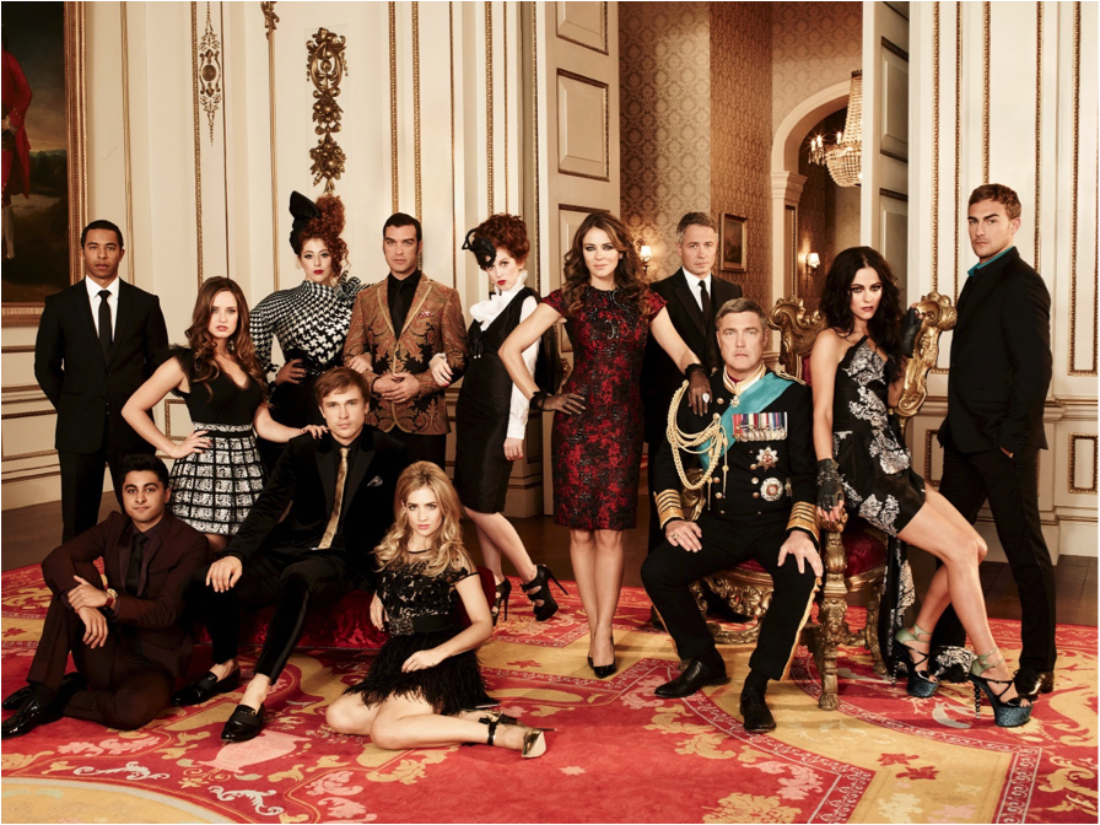 E!’s ‘The Royals’ Wants to Eat Cake, Settles for Cheese

Tabloid fascination with the British monarchy has never quite caught on stateside, despite American popular culture celebrating the manufactured exploits of its own makeshift royalty with rabid enthusiasm.

It’s fitting, then, for entertainment news and celebrity lifestyle juggernaut E! to debut its first scripted effort following Sunday’s 10th season premiere of flagship reality enterprise “Keeping Up With the Kardashians.” Centered on another high-profile, albeit fictional, family, “The Royals” aims to offer a soapy send-up of regal privilege in the digital age, plastering its contemporary opulence with the kind of self-aware swagger that helped like-minded predecessor “Gossip Girl” set a new standard for primetime guilty pleasures.

Creator Mark Schwahn is no stranger to serialized angst: having served nine seasons as showrunner for stalwart CW drama “One Tree Hill,” Schwahn knows a thing or two about targeting content toward young, impressionable demographics. The material is practically a live-action mashup of BuzzFeed and a Vogue editorial spread, featuring swaths of beautiful people in unabashedly outlandish situations, all primed perfectly to become hashtag-laden trending topics by the hour’s end.

Indeed, “The Royals” already faced a reputation to uphold months before its premiere, as news of an early second-season renewal gave Schwahn the creative jolt he needed to expand his vision beyond the proverbial palace walls.

“I feel invigorated and revitalized in a way because of the new cast and because of the new stories, because of London, and in many ways because of E!,” Schwahn gushed at January’s Television Critics Association conference in Pasadena, Calif. “People are very excited about the show. This pickup caught us all off guard and we’re so thrilled. We’re so happy to be able to do another season. And quite frankly, I feel like if we’re not doing seasons five and six and seven, I’ve made a big mistake.”

“The Royals” may claim to present wholly original characters, the most publicized of whom is arguably Elizabeth Hurley’s icy Queen Helena, but plenty of critics have noticed parallels between the show’s raffish Prince Liam (William Moseley) and another second-born son of particular English pedigree. When asked if he drew inspiration from the real royal family when approaching his character, Moseley explained how the struggle to achieve a personal identity in the midst of a very public existence transcends any potential comparison between fact and fiction.

”That’s something that my character toys with throughout the entire season. It’s who he was before and who he is now. He never thought this was going to happen to him,” Moseley said, referring to a family tragedy that takes place in the show’s pilot and suddenly pits Liam first in line for the throne. “It thrusts him into a life that was nothing that he thought it was going to be. So he meets a lovely girl and that also changes things, but old habits die hard and it’s a hard thing to break. So Prince Harry, I can’t speak for. But Liam definitely does have to rethink himself.”

Liam’s reckless twin sister, Princess Eleanor (Alexandra Park), is also facing a turning point in the midst of the family’s upheaval. While her party-girl persona does make for an endless stream of gossip headlines, the schtick has long worn thin in the eyes of her image-obsessed mother. To Eleanor’s chagrin, she begins to realize she might be growing weary of it as well.

“In terms of the partying and wildness and makeup, I think all of that is gonna be pretty relatable for young women, in general, around the world because Eleanor uses all that stuff as a mask at the end of the day,” Park revealed. “She fronts as this confident, boozehound, table dancing, don’t care ‐‐ but you get to know her, and I think like how you get to know many young women in that age of being 20, and realize that they’re actually pretty lost. They’re searching for what their reason is and their point is. She’s a royal. She’s got a destiny. She can’t do a lot of stuff.”

While Park cited both Snow White and “Twilight” as templates upon which she based her portrayal of Eleanor, Hurley discussed how she took a page from a real-life princess when crafting her role.

“I thought to myself when I got offered this part what it would have been like if Princess Diana had become Queen of England,” Hurley confessed. “Because I felt she was someone we could identify with more because she’s a more similar age group, and her kids would be about the age of these kids now. And so I sort of took some inspiration from her, knowing how she dressed, how she spoke. Everything that we saw for the public — stepping out of cars, raising money, making speeches — I took that as some inspiration.”

Of course, the late Diana was also renowned for her philanthropic humanitarian efforts, a selfless trait the unabashedly narcissistic Queen Helena doesn’t even attempt to convey. Hurley acknowledged the differences and explained how she and Schwahn integrated a literally cartoonish icon within Helena’s demeanor to better suit the show’s campy framework.

“Of course, what we never got to see with Princess Diana really was behind those closed doors, so all that, I made up myself. Mark gave us a lot of it. Some of it we picked from Cruella de Vil,” she laughed.

The game cast also has the added benefit of an on-set sounding board, as “Dynasty” alumna Dame Joan Collins will appear later this season in a highly touted guest arc as Helena’s mother, the Grand Duchess of Oxford. Collins’ shrewd casting could potentially insert an added boost of winking bravado to the already ostentatious presentation; her blunt quips when responding to reporters’ questions and her own castmates’ observations ignited an undeniable spark to the show’s TCA panel.

“Well, I certainly see the royal family as being kind of in show business. That’s for sure. I mean, how do I know if they’re acting?” she declared, when asked if she thinks “The Royals” is really the high-octane parody its marketers would have us believe. “I don’t know if we bore them senseless when they talk to us. I have no idea. But certainly, I think all the ones I’ve met do a phenomenal job of being fabulous to their humble subjects such as ourselves,” she joked.

Hurley couldn’t help but dish about the opportunity to work with Collins, confirming she was “obsessed” with “Dynasty” in its heyday, but Park and Moseley admitted their generation won’t likely recognize 80s-era soap opera royalty when they see it. Collins, however, seemed unfazed. While Hurley discussed girlhood fantasies of palatial privilege, Collins offered just the opposite.

At first glance, “The Royals” unfolds with the stylized flair and visual dazzle of a pop star’s music video. The saturated colors, lavish production design and quick edits appear designed specifically to prevent viewers from noticing the distinct lack of narrative cohesion or character depth. Even at its most superficial, however, “The Royals” does know its network and its audience, largely prioritizing appearance above substance — not unlike Queen Helena’s own life philosophy.

It’s a smartly conceptualized project that could initiate a whole new platform for original content on E!, provided at least some emotional resonance peeks through the exhaustive, opaque brocade of pomp and circumstance every now and then. A promising scene featuring Eleanor and her father, King Simon (Vincent Regan), bonding over late-night pie inserts some welcome pathos into the spectacle, and mercifully alleviates the weight of weaker links like Simon’s abhorrent, predatory brother, Cyrus (Jake Maskall), and Liam’s plucky American squeeze, Ophelia (Merritt Patterson). Cyrus’ hopelessly daft daughters, Princesses Maribel and Penelope (Hatty Preston and Lydia Rose Bewley), meanwhile, elicit the highest ratio between eye rolls and spoken dialogue than any other series regular thus far.

Schwahn hopes to maintain a working balance of American TV tropes alongside the show’s definitively British setting to cement “The Royals” as a collaborative clash of cultures both sides of the pond will appreciate. With season two already set to begin production this spring, there’s plenty of pearls left to clutch.

“Americans should think the show is so British and the British should think it’s not British at all. And that’s where we’ve sort of lived. And I think that a lot of people who read the pilot, they tended to whisper a little bit how much they liked it, because they felt like it was a little cheeky,” Schwahn chuckled. “But ultimately, I think if you’ve seen the episodes you can kind of tell what we’re doing. And I think they got very comfortable with it … We like to say it’s ‘a’ royal family. It’s not ‘the’ royal family. So hopefully everyone approaches it with that spirit.”

As for Collins, the pressure of satirizing such a ubiquitous institution hasn’t seemed to even cross her mind. When asked if she’s worried how the real royal family will react to the show, she balks with an appropriately dignified scoff.

“What? Worried? No,” she dismisses, flicking her wrist for emphasis.

Images courtesy of E! and Lionsgate

Erin is a co-founder of The Workprint. When not trapped in front of her laptop, she continues her quest to find the perfect cheeseburger. Follow her on Twitter @ErinBiglow.
@ErinBiglow
Previous The Tonight Show – Wiz Khalifa Has No Clue About Taylor Swift’s “Shake It Off”
Next Community Review: AND JESUS WEPT!!!!

‘Busy Tonight’ Cancelled by E!… and I am devastated