This is an early access review, which means that things are likely to change or be added to the game. With that in mind, I will only review content that which was available as of August 10th, 2015.

Leap of Fate is an indie roguelike game by Clever-Plays that combines RPG elements with MOBA-style gameplay. Basically, it’s League of Legends meets Diablo with permadeath. You take on the role of a technomancer and traverse the Deck of Fate defeating level after level of baddies, improving skills and stats along the way.

A simple game to grasp, Leap of Fate holds your hand through the fast-paced introduction, teaching the basic mechanics of the game. Left-click to shoot, space bar to shadow dash, and so on. But don’t let the simplicity fool you. Leap of Fate isn’t exactly an easy game. There is no passive heal or attack power regen. The only way to do that is to either get drops or get lucky enough to draw a summon resources card where you can then spend your hard-earned mana to make it through the next few levels. And if you’re very lucky, you might get a few permanent upgrades to your character in the form of new power attacks, movement speed, and so on, which you’ll need because like any roguelike, you’re going to die. A lot. 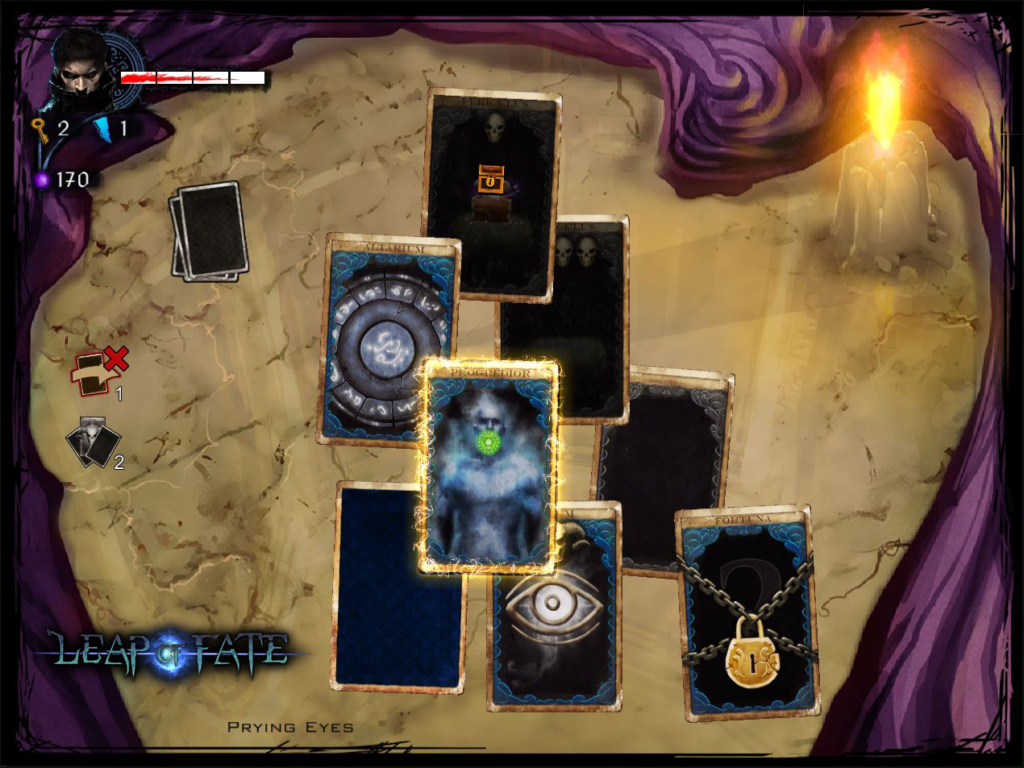 Each level consists of a hand of tarot cards, and once you beat the first card, choices appear. Usually they appear in the form of “more enemies, higher rewards” versus “fewer enemies, lower rewards,” but sometimes you’ll get an altar card or a boss card to move you to the next level. Most of the time your choice is dictated by your health and skill level. I went in guns blazing early on and then quickly got knocked back down to earth because I’m not as good as I think I am. And in Leap of Fate, once you die, you’re dead and have to start all over. Hopefully you nabbed a permanent boost to help increase your chances the next go around.

If I had one big issue with Leap of Fate it’d be the lack of depth in the game. It’s fun enough to play for a round or two, twenty minutes here and there, but in early access, there isn’t much content so it’s easy to push it to the side. In less than two hours I felt as though I’d already explored what the game had to offer, with only one technomancer and a handful of different attacks. Each level feels similar to the last and though they’re randomly generated, I started to get bored with the scenery. The variation in mobs, however, was nicely done and the music was perfect for the cyberpunk setting.

All that being said, I have hope that Leap of Fate will be an entertaining game. I appreciate the speed and the challenge of the game, not wasting any time to jump into the action. The developers have a lot planned for the future and I’m excited to try out the new characters as they come along with different mechanics. I wish Clever-Plays had released at least one more technomancer before the game’s early access launch, as that’s the biggest hindrance in score for me right now.

@theworkprint
Follow
Previous article‘Playing House’ review: All of Gwen’s life is a stage
Next articleBritney Spears To Guest Star On CW’s ‘Jane The Virgin’