“Drowning in The Floating World” Review

In “Drowning in The Floating World,” author Meg Eden assembles a collection of evocative poetry about the 2011 Tohoku earthquake and tsunami and the subsequent Fukushima Daiichi nuclear disaster.

Using a skillful assortment of styles, “Drowning in a Floating World” explores many themes associated with cataclysm and tragedy. Poet Meg Eden presents powerful depictions of helplessness in the wake of a grand catastrophe and how it feels to have to pick up the pieces in the aftermath.

These narratives, each unique in its own discourse and disclosure, confronts the fatalities of these tragic and historic events, and how crescendoing waves of sudden death forever terraformed both the landscape and the community. How a government failed its people. The lives were lost and never found: siblings, mothers, and even children, forever encapsulated in the haunting imagery of the no-named bodies and drowned corpses.

It’s as brilliantly touching as it is heart-wrenching.

Eden has a beautiful way with language, utilizing sensory details and varied approaches to the theme of water, which holds multiple useful definitions throughout the mythos of the story.

The work shares a common thread about drowning, though it is mostly utilized in environmental depictions of saturnine gloom. The sensation is overwhelming; if not by being surrounded by water, then by the feelings of a now lost history and a haunting resonance in the air. There is an emphasis on each person: who they once were, and what they meant when they were alive before they drowned away. Each poem, an effigy dedicated to loss and longing, exposes the uncomfortable malaise associated with the guilt of surviving when so many had not.

The end of the book provides some facts on the inspiration behind each poem. As the author seeks to educate, she leaves behind footnotes. Eden takes into account the different things that most haven’t noticed before, in a way that poems about the ghosts of a place can only do: elicit emotions out of the unspoken to form spoken truths. 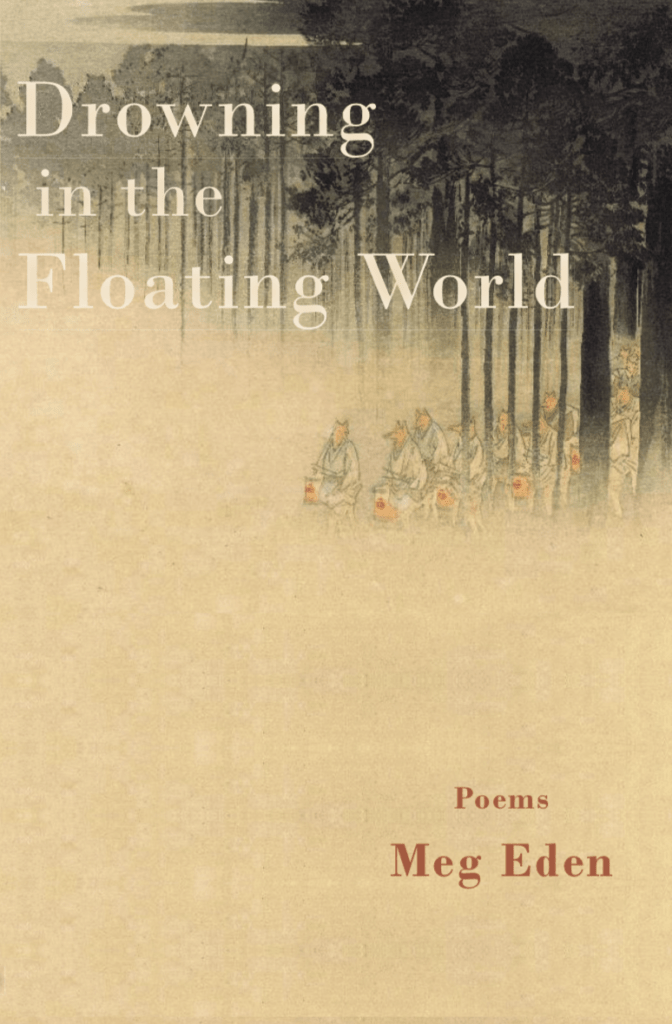 Personal Favorites From “Drowning in the Floating World”

A haunting tale of preparing a drowned and maggot-filled victim of the tsunami for her last rights and cremation in front of her family. There’s a line I liked, which occurs after the narrator tries to prep the body’s hands in a symbol of prayer:

“The beads between her fingers cannot hide the skeletal hand, a ghost against the fleshy one.”

It’s simple, but I like it. Despite all the attempts at making it feel humanizing and look better, it’s still a body. One that has to go through the decomposition process like all the others. That despite the attempts, it’s just another corpse amongst the many… and the tragedy in that feeling.

It was also apparently inspired by the 2008 film Departures.

Coming Home after a Tsunami

I like this one a lot because it’s about surviving and the failures of the government to relocate and take care of its people. While the memories of the dead are memorialized, the living are being forgotten. Displaced people unable to live or feel at home.

It’s also noted to be Inspired by Shuntaro Tanikawa, a legendary poet and acclaimed translator, who had translated the Peanuts comic into Japanese. “A master of magical realism combined with good humor and accessibility” – Meg’s words, not mine.

What stood out about this one was the unique play on metaphor, comparing the act of ‘sex work’ to the ‘water trade.’ Both emphasize body preparations for an empty exchange of service, and, in the process, both stimulates and simulates feelings of emptiness. This unspoken sense of floating away on an emotional level of disconnect from the inside.

You can purchase a copy of “Drowning in a Floating World” below:

And win a copy of “Drowning in a Floating World” on a free raffle giveaway (Expires Saturday 3/14) by clicking here.

@theworkprint
Follow
Previous article
‘The Magicians’: The Takers Have a Purpose
Next article
Prodigal Son: “The Job” Review