We’re coming close to the end of The Magicians and in this episode we finally learn what the Takers actually are thanks to Josh.

The magician is still in Fillory and finds himself with the Dark King, aka Rupert Chatwin, inside the forest. Rupert ends up placing a gold chain with a blood thumbprint on his neck before summoning a Taker with some gold. Poor Josh then gets dragged beneath the soil into a whole other place. When he wakes up, the Taker who had accosted him comes over, seemingly drawn to the shiny object around his neck. However, once the creature touches the medallion it appears to get poisoned and collapses on top of Josh. Now that’s super interesting that Rupert’s blood is somehow affecting it. Is it because the king is tied to Fillory through magic that somehow makes his blood special? Or did he do something else to create that response?

In the meantime, Josh is trying not to freak out and remembers that he still has Margo’s eye and tries to use it to let her know where he is. Margo does get the message but somehow her eye being in another realm is not meshing with her body physically. Her nose starts to bleed and she nearly passes out on the couch with Kady, Alice, and Fen looking on in concern. Back in Taker land, Josh runs into a little girl who had also been snatched along with her friends. Her friends however were put into a shiny monster with a yellow eye that when pushed opens its mouth. The magician realizes that is an elevator and it strikes him as odd to have one there. The young girl doesn’t want to help him though because adults lie when suddenly a Taker arrives and snatches her up. Josh then entices the creature with his gold medallion and he and the girl take off. 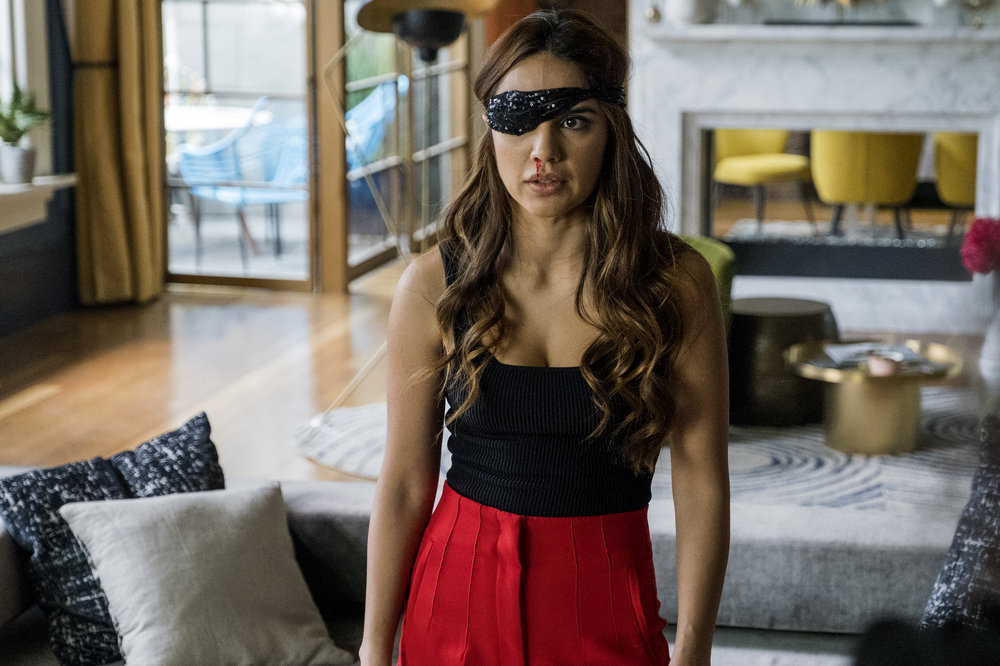 They make their way to the elevator and when they enter there’s only one button inside, to the Underworld. As another Taker notices their presence and begins to rush towards them, Josh decides that going to the land of the dead is better than this place. Thankfully the doors close in time and deposits the duo to what seems to be a hotel lobby. The girl asks if this means their dead because this is where people go when they die. Josh says that technically they didn’t actually die. He is honest though and says that things aren’t looking good but promises he’ll do whatever he can to get them both out of there. They approach the front desk where a small sign saying, “Welcome you are dead. Please take a card.” Beneath the sign is a box of Underworld metro cards much like the one Quentin got at the end of season four. Josh rings the bell for assistance and an old man comes who informs them that they are dead. The little girl begins to get cry when the man says fine he’ll try to get someone who they can talk too. Excellent acting skills by this young lady! Suddenly someone calls out Hoberman and we find original Penny!

Penny has one of his cohorts take care of the Fillorian girl for a bit while he chats with Josh. The bad news, he can’t really help get them out of there because not only have they been affected by the loss then return of magic but a lot of librarians have been relocated. Trouble is they don’t know where. To make matters worse, Hades has vanished because he could have stepped in and helped solve crap. The god of the dead also controls the Underworld’s connection to the top and so currently they are stuck. Normally folks who mistakenly find themselves there have 24 hours to file a dispute which are routed above, but they can’t do that right now. Josh asks if there’s a map of the Underworld so that he can try to start checking out places that the god could be in. Penny realizes that he knows someone who can help and the duo go to Benedict Pickwick! He’s resumed his tradecraft even in the Underworld. Interestingly enough as well the traveler didn’t know about the Takers.

Benedict (who is still trying to get Penny to attend his brunches) is a little miffed that they’re just there because they need something. Josh asks him as the expert if he knows all the places where Hades likes to hideout or frequent, but the god was apparently super strict on what the mapmaker could track regarding his whereabouts. It did give him an idea though and he shows the other two the location of an area he wasn’t supposed to include but he did add in everything else around it. The trio head to this uncharted area that looks to be Hades’ spa retreat. An attendant soon appears and informs them that the lord of the Underworld may be gone for good. Josh though rummages through a discarded robe on a lounge chair and seems to have found the god’s wallet and inside is a piece of paper that may be a clue to where the powerful entity is. He then puts his MargoPro (Margo’s fairy eye now attached to a leather cord) to it so that she can read what’s on the sheet.

Except that Margo currently is unconscious because Kady, Alice, and Fen are trying to figure out a way to sever her connection to her eye to save her life. The phosphoromancer comes up with a plan to redirect the signal from the former high king of Fillory into a prism. Said object is lodged into Margo’s empty eye socket and as soon as she gets up from the table Josh’s image comes through and projects onto a screen via the prism. Bonus is that the magician is no longer in pain. Josh mouths that he’s still alive, shows Penny and Benedict, asks for their help to find Hades and gives provides an address in Queens.

Alice and Kady head to the location where they find the god in a bathrobe eating junk food and playing video games. He has apparently been expecting them though but refuses to help because who said death is fair? Alice realizes that Hades is in mourning for his wife Our Lady Underground (killed by the Monster’s sister last season). She tries to talk to him and he informs her that it’s not the same when a god dies (they’re not supposed to for one thing) but he doesn’t know what happens to them after and that’s all he gets forever. Alice wishes that there was something she could say that would help but explains that their friend Josh isn’t head but he was in the Taker realm when Hades interrupts her that isn’t possible. He explains that place is not connected to the world above to which the ex-niffin responds that someone opened a door. The god further states that is very bad news and reveals that the Takers are actually guard dogs and that their realm (Purgatory) is a security measure to protect their world and the world of the dead. Apparently if a soul tries to leave it takes them back to the Underworld. Well that makes total sense now. Alice adds that she thinks she knows who opened the door in Fillory (Rupert) because he just wanted to bring back someone he loved. Reluctantly Hades agrees to help Josh and in return they need to clean up this mess because if they don’t their world will be destroyed too. So if Lance makes it passed the Takers into the land of the living again, the door would essentially allow passage to all the dead. Hades claims that could be the end of everything.

Josh and the young girl take the elevator back up to Fillory where they come upon many Takers who appear to be dead from poison. This is likely the work of Rupert since dead Takers would clear the path for Lance to be able to come up through the elevator. Could the Dark King be aware of the greater ramifications of his action? If given the choice would Rupert choose to die to be with his love? Hopefully that option becomes available before the series finale.

The Magicians airs on Syfy Wednesday at 10/9c.