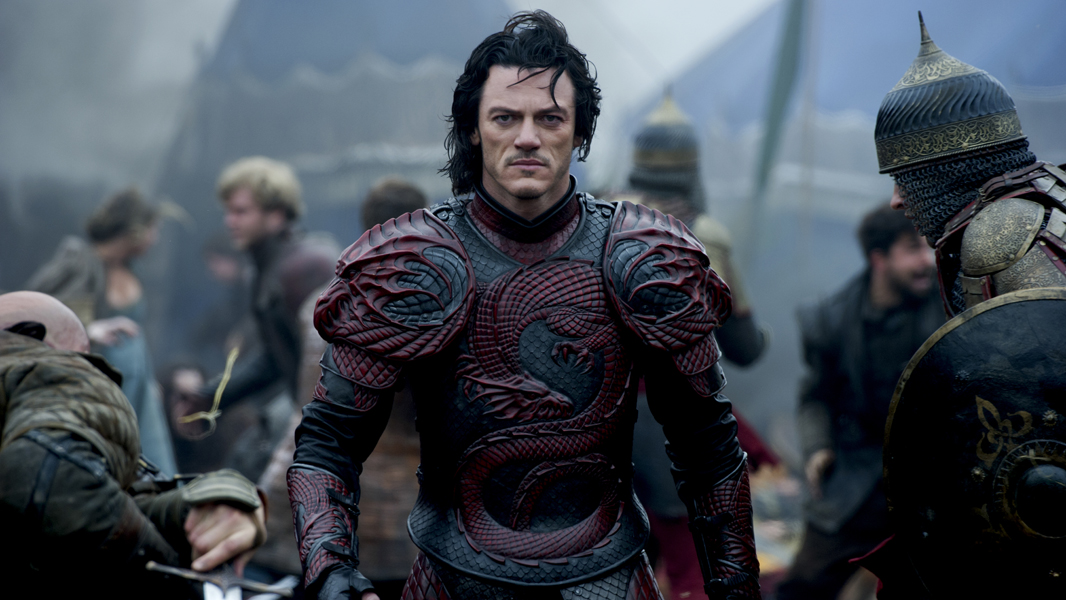 The new Dracula film sits some place between one of those Russo-Finnish productions Joel and the ‘Bots used to skewer on Mystery-Science Theater 3000 and Medieval Times on bath salts.

The good news? None of the vampires sparkle. And I think that might count for something.

First-time feature film director Gary Shore brings us “Dracula Untold”, a reincarnation of one of Universal’s classic movie monsters which, if I understand it, is the studio’s attempt to restart the entire Universal Movie Monster franchise. The problem is that the movie suffers from delusions of grandeur.

The movie tells the story of Prince Vlad Tepes who, back in the day, looked as harmless as Dennis Eckersley but murdered and, subsequently, impaled tens of thousands of soldiers and people throughout his lifetime before he was beheaded by–oh. Wait, no, that’s real life.

Universal’s not interested in telling you that Tepes was a twisted, sadistic man whose antics were so disturbingly awful, that they inspired “Dracula”. Nope. Shore goes for a Chris Nolan Reboot and ends up with Chris Columbus revisionism instead.

If Tepes wasn’t somewhere smiling from the flattery before, he should be grinning in pure delight now.

Universal’s bringing Sexy Drac (if you’ll indulge me; pardon the pun) with long-haired stud, Luke Evans, playing the titular character. Instead of a brutal, murderous psychopath Tepes is a loving, caring family man with a wife, Mirena (Sarah Gadon) and son, Ingeras (Art Parkinson). He, along with his kingdom, is mentally and physically scarred from the last big war they fought. Tepes, as it turns out, is fresh off murdering about 1000 boys and men. So why root for this guy? Because, ironically, he did it in the name of God which, I’ve become convinced, was the medieval equivalent of saying, “We were all drunk at the time and had an Asshole moment,” but I can’t be sure because I’m not a historian.

The war may be over but Tepes is concerned that the Turks are ready for Round Two when they find a trail of weapons and armor leading to “Broken Tooth Mountain”, the least threatening lair moniker in movie history. Here, they cross paths with a mysterious and aggressive entity that attacks Tepes and his men. After escaping with his life, Tepes learns that that they dealt with a vampire.

When the Turks come knocking again, this time with a demand from one Hamza Bey (Ferdinand Kingsley) that Tepes cough up 1000 of his own men to join the Turkish army, Tepes murders Hamza and his men in a bloody rage. Knowing that Hamza’s boss, Sultan Mehmed (Dominic Cooper), is gonna retaliate with fury, Tepes actually scales Broken Tooth Mountain (by himself, in inclement weather with no climbing gear) and confronts the thing that tried to kill him the first time they met. Here, he meets an aging vampire (the veteran Charles Dance, delightfully hamming it up) who strikes a deal: he will grant Tepes with temporary immortality and supernatural powers so that he can take care of business. In three days, Tepes will be mortal again — but only if he can resist sucking blood for those three days.

From here, Tepes gains the ability to turn into a swarm of bats, kill whole armies in the time it takes to watch an episode of your favorite sitcom and has that really cool Bat Sonar Sight Lucius Fox made for Bruce Wayne in The Dark Knight — only built in.

A premise like this could and should be fun. The problem is that the fun is drained out of it. Even the hokey bits — an overwrought choral and bass soundtrack, overdone accents, bats tossed around like obedient paper planes — just aren’t executed with subtlety. They’re shoved down your throat in loud bursts and with no logic or thought. And, save for a really intense set piece near the end, this Dracula is PG-13, thus we’re missing the trademark bodice-ripping lust and debauchery normally seen in a Dracula picture — and, strangely, a curious lack of blood. I’m not one who demands these things be in my Dracula flick but if you’re gonna make a Dracula movie, it would benefit the filmmakers to actually put something recognizable and iconic or else it’s just a shaggy dog story about a guy who became a vampire

The supporting characters don’t even make any real sense. Tepes’ wife is fairly inert and is seemingly cool with her husband being an agent of the devil (even when she witnesses his skin chipping off his body in the sunlight – a dealbreaker in most marriages, I’m sure), though the rest of the kingdom doesn’t really get it…but, hey, as long as everyone’s safe and Vlad’s able to give the wife some lovin’, everything’s cool. This is one of the main problems with the movie: Dracula’s suddenly an anti-hero instead of a full-fledged villain. Even when we should be seeing Anakin-becomes-Vader, Dracula Untold is content with showing Tepes stuck in neutral. Tepes is so kind-hearted that, by the end of the film, you can’t even buy that he’s that same blood-sucking fiend we’ve all come to know and love (or hate, as the case may be.).

Over the years, we’ve been privy to several incarnations of Dracula and vampires in general. We’ve seen the good and the bad. We’ve seen this creature as romantic, a ruthless killer, a misunderstood avenger and a warrior. We’ve seen the stories told in so many forms from literature to comic books to video games (and this might have made a nice “Castlevania” flick if more work was put into it) but, overall, “Untold” is a letdown. It’s an insecure movie, completely unsure of itself, trying to decide whether it’s horror or fantasy or sword and sorcery.

As a result, audiences may decide Dracula is DOA.

Matt Perri is one of those literary Ronin you’ve never heard of until he shows up and tells you he’s a literary Ronin. He’s a native Californian, a film buff, old school gamer geek, and a sports/entertainment fan. A lifelong Giants, 49ers and Sharks fan, he also covers the world of pro-wrestling, writing recaps for WWE Monday Night RAW and Total Divas at Scott’s Blog of Doom. You can follow the guy on Twitter via @PerriTheSmark as well as here at The Workprint and his own blog, We Hate Your Gimmick.
@PerriTheSmark
Previous ‘The Walking Dead’ Premiere – 17.3m Record Breaker
Next AHS: Freak Show Increases Messiness in Second Episode

In my next comic book review for The Workprint, these talented artists team up to create a very disturbingly unique (and buggy) team up that will definitely play on all your fears in this very exciting thriller!