Dancing With the Stars Review: And the Winner Is …

Well folks, another wonderful season of cheese-fest awesomeness has come and gone, as Dancing With the Stars wrapped up its 20th season and its 10th year this week. The entertainment and excitement all took place in a two-part finale, and featured the entire cast and special performances, all back one more time to get on that dance floor. I’m not going to spend too much time breaking down each detail of every single dance this week, because really, if you are a fan of the show, you know that what everybody ACTUALLY cares about is the Freestyle Dance. So, we will talk about that more than everything else. Besides, once again, Len needs to get to bed. His prune juice and favorite blankey are awaiting him for when the show is over. Let’s get started …

The Top 3 performed in two rounds to end out the shows routines before voting was closed. Round One was to re-dance their favorite dance from the season that they wanted to improve upon or get higher marks on. Round Two was, of course, the Freestyle Dance, where each pair choreography and dances literally whatever they want to. This dance is always the highlight of the season, and viewers love it almost as much as Bruno loves tight shirts. Here we go …. 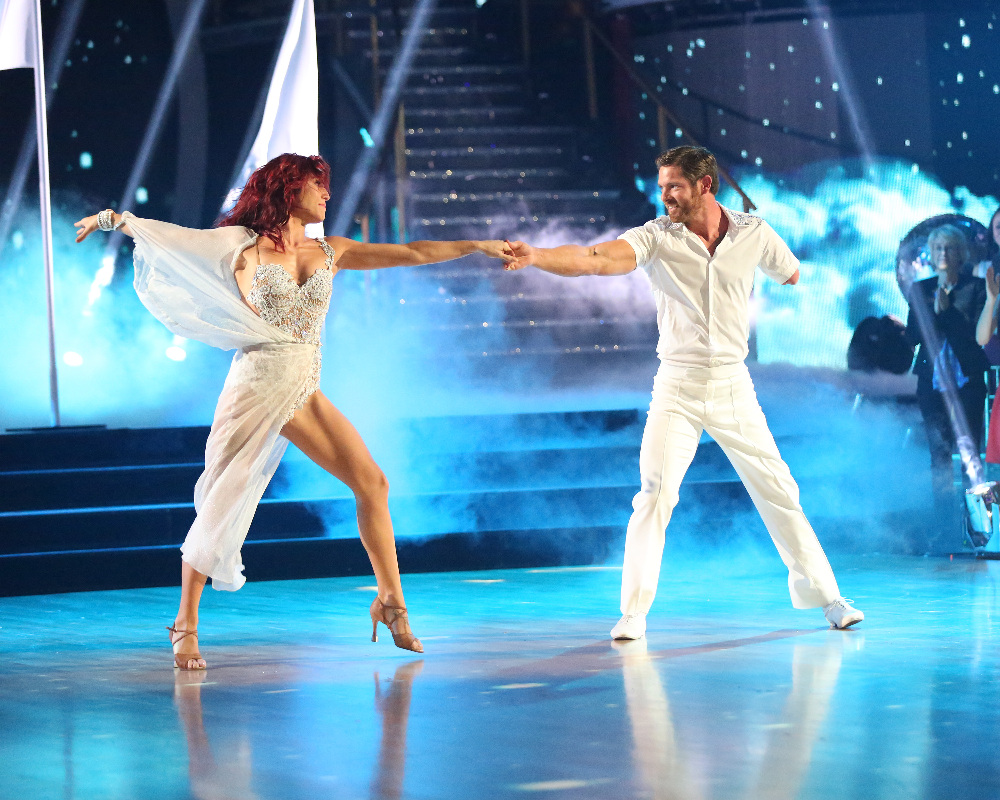 Noah / Sharna:  Round One was the Argentine Tango, which was great the first time around, but even better this time, as Noah seemed more confident. Len told the audience “Don’t moan if you don’t phone”. Anotherwords, don’t bitch if you aren’t calling up and voting for your favorite. Okay Len. Horny Carrie Ann groaned and made weird noises again , saying “Grrrr!!!! Arrrghhh!!!” I dont think she liked it. Then the pair went back to speak with Erin Andrews, whose yellow dress looked like something she stole off of a 1950’s living room curtain. Scores were eights all the way around.

Round Two was Freestyle, and Sharna’s idea was to tell Noah’s vulnerable story through dance, and to strip him down emotionally to the day he woke up on Christmas morning to discover he lost two limbs. Noah cried during rehearsal footage when describing what this dance means to him, and his emotion showed in the performance. The song was appropriately “Titanium”, and for the first time (I think), he danced with the prosthetic leg, which he hated and didn’t want to dance with in the past. But it worked to perfection for the choreography in this routine. By the end, I was crying more than Noah was. Julianne didn’t cry because she called it “a celebration. It was completely whole.”Bruno called it truthful and meaningful, and Carrie Ann told Noah that he shows us over and over again, what true art really is. Scores were perfect tens all the way around. 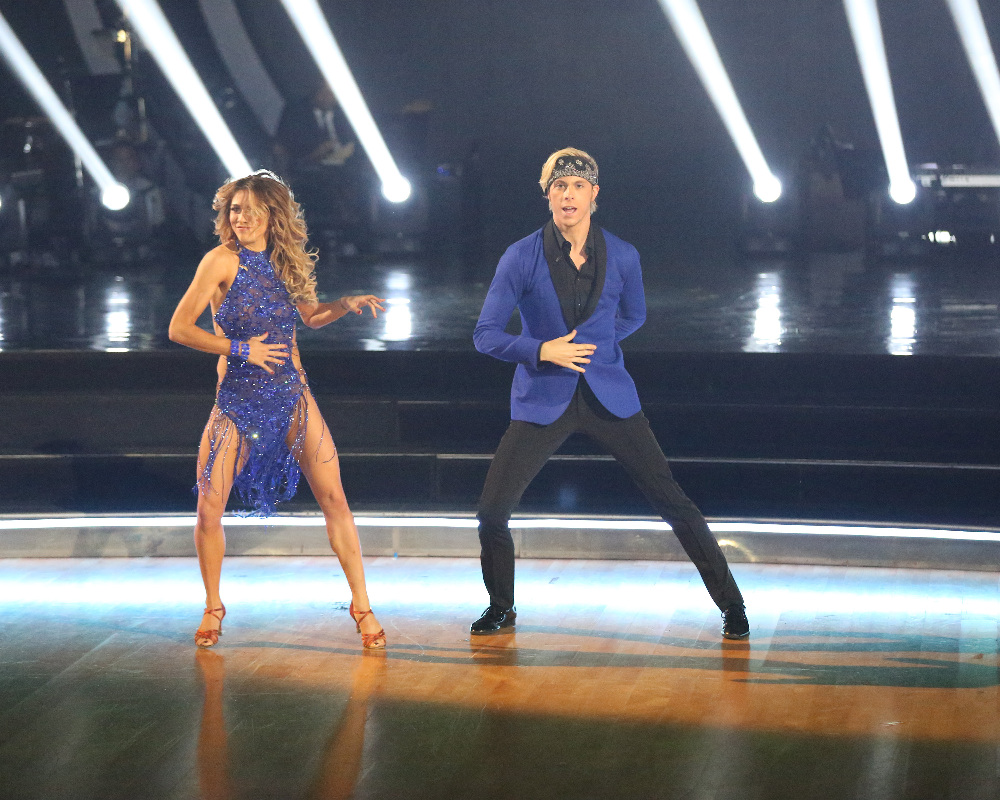 Riker / Allison:   Their first dance was the Paso Doble where he was Jack Sparrow from “Pirates of the Caribbean.” Len gave them a standing ovation, and Bruno went mental with his standing up and yelling out excited remarks that nobody can comprehend. Len used the term “swashbuckling”  in his review, which I don’t believe I’ve EVER heard anyone else say out loud, except him. Backstage, Riker continued talking like a pirate to Erin. Oh my goodness, dude. You’re not really a pirate. Relax. Calm the hell down. Scores were perfect tens.

Their freestyle dance was over the charts awesomeness. I’m not a huge Riker fan normally, but this dance was one of my favorites of the entire season, and perhaps even EVER. It was just so magnetic to watch, and it managed to take classic old-style music and dance, and marry it with modern and hip music and dance. Dressed in top hats and all white, the pair glided across the floor to “I Wont Dance”, but a really strange version that was built for modernizing. Julianne said “that had everything”, while Bruno called Riker “Fred Astaire, reinvented”. Len told them they managed to bring the past into the present. There’s a joke in there somewhere about Len BEING the past in the present, but I’m too lazy to construct it right now. They received perfect tens also. 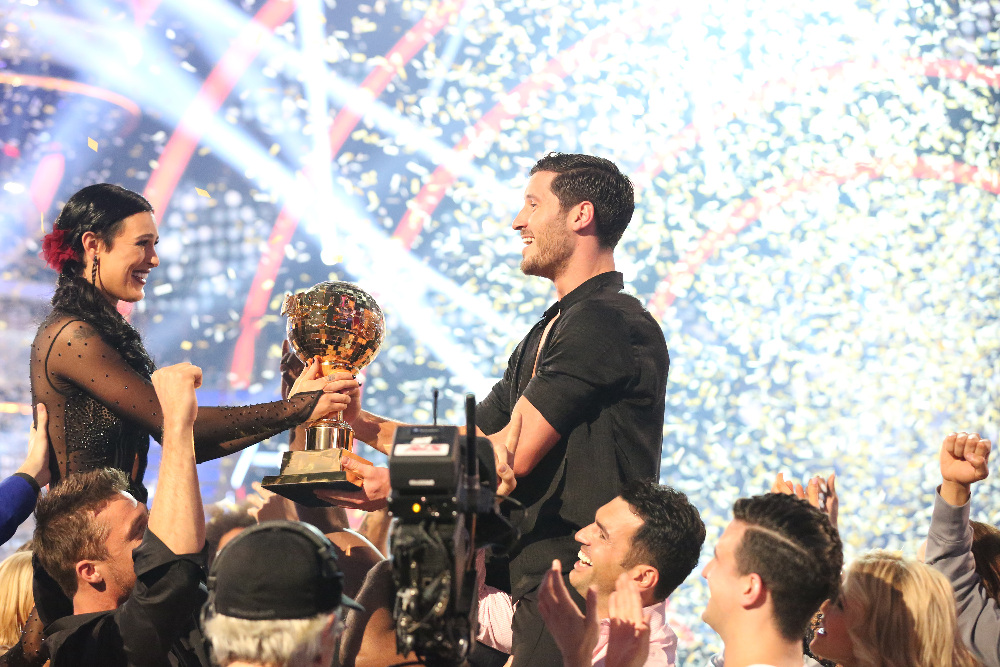 Rumer / Val:   Their first dance was to re-do their Foxtrot from week one of the show. Bruno told her “you came from Hollywood Royalty, well now you are dancing royalty.” Julianne called it flawless, and Daddy Bruce Willis was crying in the crowd, and Erin had to point it out to the world. “Hey your dad was sobbing in the audience, I don’t know if you saw. Lets take a look.” I’m sure Bruce was really happy about that one. They got perfect tens.

Freestyle dance for these two was incredible. In rehearsals, Val was upset because he felt like the freestyle is all about doing it up big, and he said that just isn’t him. He thought it felt dishonest. So he decided to strip Rumer down to the bare essentials – music, dance floor, bodies. No background dancers, no fancy tech stuff – just her and him and a beautifully complex and intricate dance. Man was it ever gorgeous. Rumer wanted to do something that was all her and Val’s, since he is always compared with his brother Maks, and she is always in the shadow of her famous parents. They certainly created this one all their own. Bruno said it had “bewitching intensity”, while Len called it pure and brave. Perfect tens again.

On night two of the Finale Shows, the votes from America were now in, and it was all about the entertainment. THe show took place both inside and outside , with multiple dances taking place outside the theater. On this episode, Erin’s dress looked a bit like Christmas wrapping paper. I kept searching for my scotch tape so I could put a bow around her and send her off somewhere to some happy home. Twitter voted Riker and Allison to do their freestyle dance again, so we got to see an encore of that. Then, for the most part, Erin was outside and Tom was inside, and Red Foo was everywhere for no reason. Last years champ Alfonso, who is also the new host of Americas Funniest Home videos after Bergeron leaves that gig, did a bit of dancing for us too. The rest of the cast returned, and we saw dances from Suzanne Somers, Patti LaBelle, Willow, and many, many more. Farmer Dull was back and did a Footloose number revival, and Derek and Julianne starred in a gorgeous dance piece set to a Sia song, and joined by two kids playing the younger versions of Derek and Julianne. Finally, the Top 3 did fusion dances, and then the 3rd place pair was announced (Noah and Sharna.) This left the top 2 as Riker or Rumer …….

Val has never won the Mirror Ball before, and he was ecstatic. All three in the top were great, but I did think Rumer was the best dancer, and also had the most grace and beauty. I don’t know how they can top this next season, because this one was pretty darn good. Congratulations to everyone, and especially to my TV host crush Tom Bergeron, for another successful season in being witty and funny and awesome.