Cinderella Review: A Dream Is a Movie That Branagh Makes 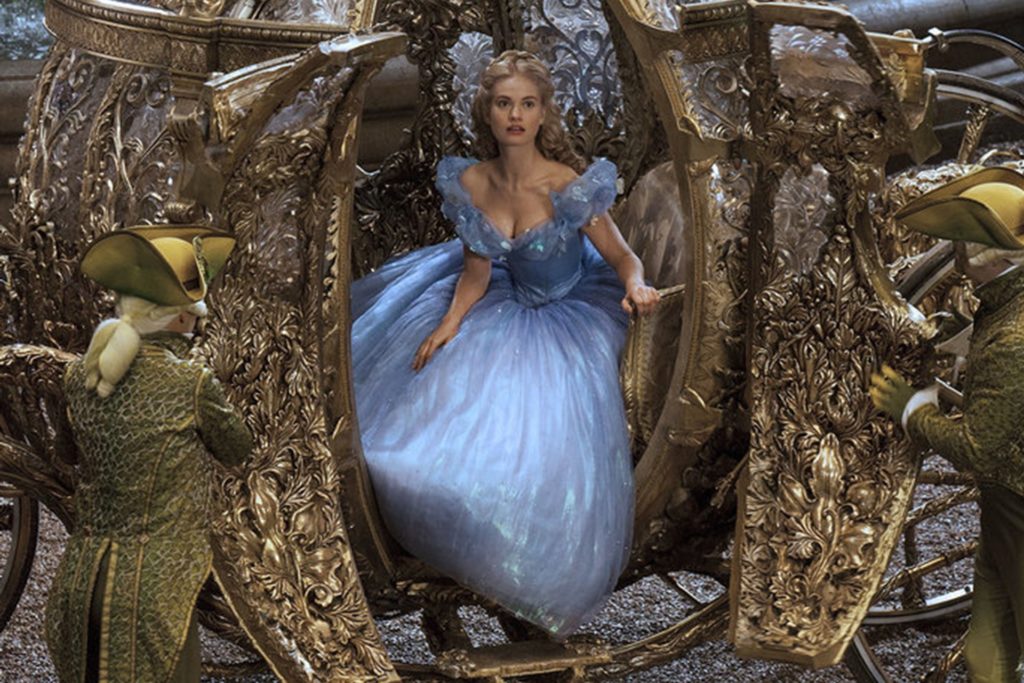 If anything is true about the current cinematic landscape it is that nothing is safe from being remade, rebooted, or “reimagined”. All of the big movie studios do it but the folks over at Disney have been doing it in a rather specific way that essentially just calls for recreating their classic animated films in live action form. This has so far been done (with unspectacular results) to Alice in Wonderland and Sleeping Beauty (in the form of Maleficent) with The Jungle Book and Beauty and the Beast being prepped to follow as we speak. But this week brings us another in the form of Cinderella, which made its animated debut in 1950 and has gone on to become one of Disney’s most beloved classics.

Now, when I first heard that Cinderella was next on the live-action update slate I assumed the basic bone structure of the story would be there but with a bunch of computer generated bullshit tacked on. You know the kind of stuff I’m talking about: epic battle scenes, giant creatures, and made-for-3D action sequences; AKA stuff that will get teenage boys into theater seats too. These are the kinds of things that turned Alice in Wonderland, Maleficent, and Universal’s atrocious Snow White and the Huntsman into the soulless, dull films that they turned out to be so why should I have expected anything different for Cinderella?

But then it was announced that the master of Shakespearean cinema, Kenneth Branagh, would be sitting in the director’s chair and my hopes began to rise. And then as production began and we were slowly teased with sketches of Dante Ferretti’s set design and Sandy Powell’s costumes, I started to actually think that Branagh and company might be onto something special. 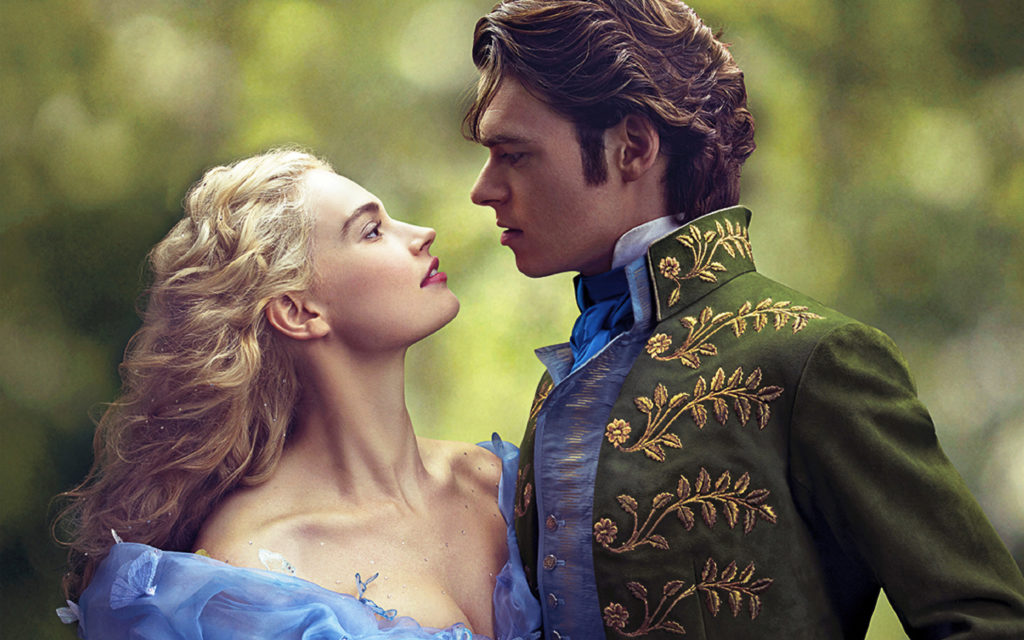 And now that I’ve seen the finished piece I know that I was right because for the first time I can say that Disney’s live action update of an animated classic is actually an effort worth seeing. And what makes it so special is how true it stays to Disney’s original masterpiece. Rather than haphazardly trying to wedge in additional story elements to make the film more stereotypically marketable to young boys or foreign audiences, Branagh hems extremely close to the classic narrative but tells it with one of the most exquisitely beautiful productions I’ve seen in a long time. The sets, the costumes, the music, and the cinematography are so stunningly gorgeous that it’s nearly impossible to avoid getting caught up in the age-old yarn of the kind girl who loses her parents only to become a servant for her dreaded stepmother and grotesque stepsisters before meeting her fairy godmother, attending the royal ball in style, falling in love with Prince Charming, and leaving behind that famous glass slipper that ultimately helps her be united with the Prince in marriage.

Some viewers may initially yearn for some kind of modern twist on this simplest of stories but I think its clear that Branagh wisely thought, “If it ain’t broke, don’t fix it.” And I couldn’t be happier he did. 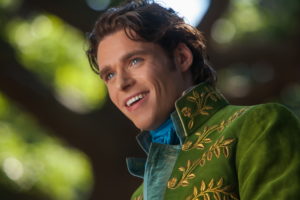 The film, as delivered, oozes with so much old fashioned charm that I simply found myself grinning at how wonderful it all was even when the screenplay occasionally dips into moments of cheese that perhaps only small children will appreciate.

But the film’s impact is not limited to its artistic physical attributes. Branagh has also assembled a fantastic cast that delivers the dialogue with enough eye-twinkling charm to win over even the most cynical viewers. This talented group is led by Lily James (Downton Abbey) in the title role and she absolutely nails it with a perfect balance of sweetness, fragility, and strength. There won’t be a single little girl who watches this without dreaming of being James as Cinderella in that stunning blue gown she wears to the ball. Hell, even I’d be willing to give it a go!

Surrounding James in the strong supporting cast is Games of Thrones dreamboat Richard Madden as the Prince, Holliday Grainger and Sophie McShera as the evil stepsisters, Stellan Skarsgård as the scheming Grand Duke, and Helena Bonham Carter (who actually looks quite beautiful when not covered in Tim Burton’s near-death makeup!) as the Fair Godmother. Even Agent Carter herself, Hayley Atwell, gets a nice cameo role as Cinderella’s dearly departed mother.

But the real scene-stealer here is of course Cate Blanchett as the wicked stepmother. I mean…there just isn’t anyone else who could’ve nailed the role like she does and her costumes alone are enough to make every fashionista in the audience squeal with delight. 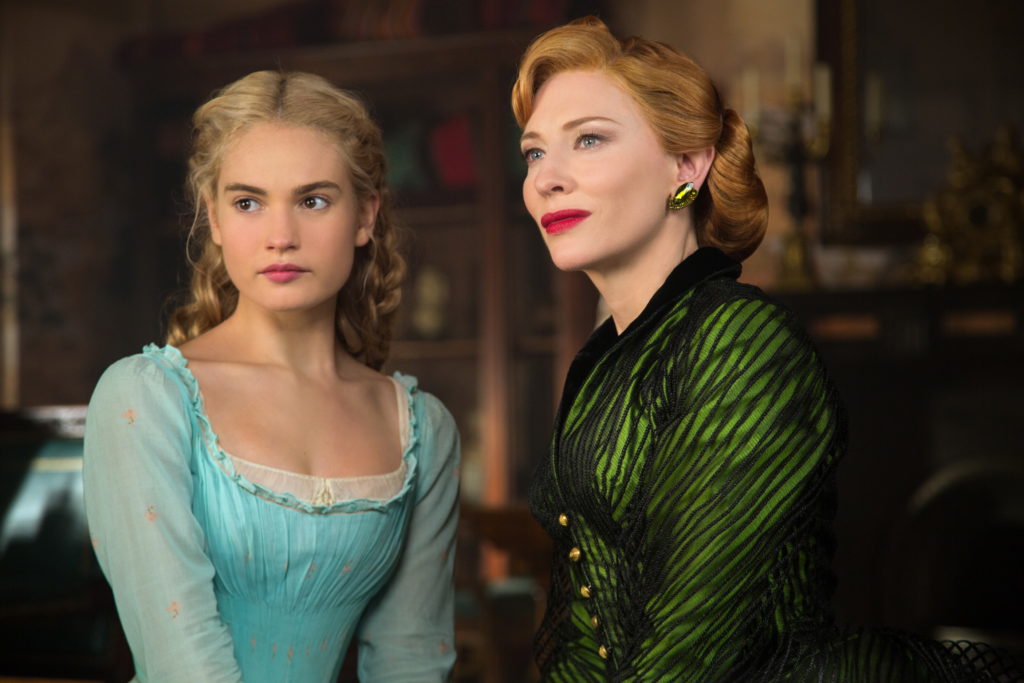 It goes without saying by now that I highly recommend seeing this lovely new telling of Cinderella and I genuinely hope it finds the audience it deserves if only to prove once and for all that not every movie needs an epic battle scene or an abundance of CGI characters. They just need an excellent story told by artists working at the top of their game. This is what Branagh and company have done with Cinderella and if Disney continues down the road of adapting more of their animated classics, I can only hope this is the model they follow.

Previous article
’12 Monkeys’ Recap: Into Project Splinter’s Past
Next article
‘The Last Man on Earth’ Review: Raisinballs and Wedding Bells