’12 Monkeys’ Recap: Into Project Splinter’s Past 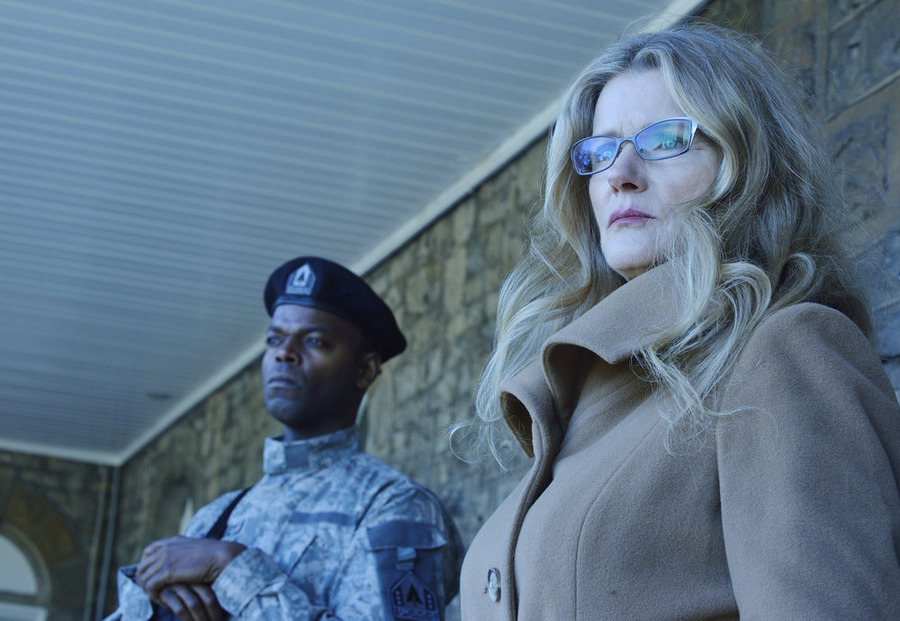 Every week “12 Monkeys” takes viewers on a roller coaster ride as the heroes battle foes from both the past and the future. This week’s episode expanded the universe even more as we met a new group with deep ties to the Splinter Project but possesses a drastically different outlook that will directly affect Cole’s life.

We pick up from last week in 2043 where Jones and the others are trying to bring Cole back since sending him to Chechnya had not stopped the Army of the 12 Monkeys from releasing the plague. Things go very wrong when the time machine malfunctions because of an unstable core, leaving the chrononaut MIA.

Back in 2015, Cassie is struggling to come to terms of Cole’s death and believing that they had truly stopped the plague. Aaron suggests that they get a meeting with Senator Royce and coax him into discussing what happened in the “Wexler Aftermath” to confirm if they had found Cole’s body and give Cassie some closure. Whatever buddy I know your ulterior motive is to get your girlfriend back.

They manage to see the Senator and Dr. Railly convinces the politician that it would be in his best interest to send her to Chechnya so she can truly assess the situation on the ground and prevent any outbreak from occurring. He reluctantly agrees and Cassie asks Aaron to come with her. He refuses however, saying that she needs to do this for herself and that he’ll be there when she gets back. Then they kiss. My love for Team Casserole obviously came out because I yelled at my screen. His body isn’t even cold yet!!! This surely must be just Cassie feeling very vulnerable and Aaron is taking advantage (or this is what I tell myself shh…)

Meanwhile in 2043, Jones determines that they can’t fix the machine and need a new manifold to stabilize the power core. Here’s where we get some more background information on Jones and Project Splinter. After the plague happened and governments collapsed, the president, top officials, and the smartest minds (that were still alive) where transferred to a place called Spearhead to try and find a cure. For twenty years the scientists there worked to find one but their efforts got them nowhere. The virus mutated, killing many in the compound. Things became even worse when Colonel Foster initiated a coup by killing the remaining officials who were looking to move Spearhead’s resources to a different location. His wife had succumbed to the plague and Foster (Xander Berkeley) became obsessed with finding a cure. Jones however was spared and soon after took one of the two available cores to work on Project Splinter.

Jones sends Whitley and Ramse to Spearhead in order to get the spare manifold but warns them that it could get dangerous. Upon getting there Ramse is naturally suspicious. Still, there is lots of life and laughter with children and other civilians in the compound. Whitley’s father turns out to be the head of security and we get a little glimpse of the sacrifice he made when he decided to leave “home” to go with Jones. They ask to see the colonel and who appears to have adopted a savior complex. Foster shows his skepticism over Project Splinter and asks why they are having this conversation if Jones had successfully sent someone back in time. He then refuses to trade them his spare stabilizer manifold because in case his own fails, he needs it to continue powering the massive amount of servers Spearhead had collected over years (whose purpose is to find a cure). Foster claims that within a few years they’ll be able to engineer a vaccine that can anticipate all the possible mutations of the virus before it occurs in nature.

Mmm that sounds too good to be true bud.

Ramse gets a little touchy when Foster still refuses to help and goes off on his own when he suddenly comes across Elena. That’s right, THE Elena that Cole had once mentioned as not Ramse’s usual type. He asks her what happened to her and she says that she thought the West 7 would have gotten to him by now. Poor Ramse (who’s first name is Jose btw), you can really see the torture in his eyes as the love of his life stands in front of him. She explains that it was too dangerous to stay with him and he quietly says that he would have protected her. Here’s the game changer folks, Elena responds that it wasn’t herself she was worried about. She takes him to another part of the building and introduces him to Sam, her son. OMG THAT’S RIGHT RAMSE IS A DAD!!! Feel free to drop your jaw. The kid is adorable and looks like a mini version of his pop.

Ok I’m sure you’ll need a few moments to process this new information.

Back at Project Splinter, Jones only manages to completely kill her core after trying to once again unsuccessfully bring Cole back from the past. Speaking of Cole, he’s actually alive and still stuck under the rubble in Chechnya. Luckily for him, some locals hear his voice and are attempting to help him get out. We’ll come back to Cole a little later though.

Jones comes to Spearhead herself, this time asking to take their core to replace theirs. Foster counteroffers with consenting to lend them his core in order to retrieve Cole but afterwards they all would need to come back to Spearhead to help in the effort to find a cure. This time the German doctor says that’s out of the question because the “cure” could not be found. Their ensuing argument is a little reminiscent of Ramse and Deacon’s opposing world-views. In this case, Foster feels that Jones’ obsession in time travel as the answer was her inability to let go of her daughter Hannah’s death. He proves his own belief in moving forward (not backwards) by burning the picture of his wife and himself that Jones brought to him as proof that Project Splinter worked. Jones in the meantime thought that Foster was giving people false hope because they had already tried to find a cure twenty years ago and that her way was the only way. Here’s where Foster’s counter makes you pause because he says what if the plague were really meant to happen and whatever they tried to do would not change the outcome. This is something that must have crossed Team Splinter’s minds because nothing they’ve done up to this point has worked. Even stopping Operation Troy did not prevent the outbreak. So who was actually right in this case, Foster or Jones? Both characters believe that they are in the right and have their own hidden agendas.

Jones and the rest of her group return to their own facility with some scientists beginning to doubt the German doctor and wondering if Foster truly had the cure within his grasp. Jones interjects that the colonel did find a cure but it was for the virus of 2033, the one that killed many in Spearhead, not for the current mutation. Ramse argues that the only way to save Cole is to take Foster’s deal but the doctor says that she will find a solution. After he leaves, Jones tells Whitley that they need to take Spearhead’s core by any means necessary. Uh oh that sounds like trouble.

Now let’s get back to Chechnya. Cassie is on the ground making her way to the area where Cole had found Wexler to make certain that he’s really gone and the plague was effectively stopped. Cole is now being helped by some local villagers to get out of the wreckage, though he is still injured from bullets via Wexler’s henchmen in last week’s episode. This is a pivotal moment as Cassie finally arrives at her destination and Cole is being hoisted from underground because it seems like they are going to run into each other, except that doesn’t happen. Dr. Railly finds the area empty except for the two Russian soldiers guarding the entrance. She calls Aaron and says that Cole is really gone and that they’ve succeeded, but of course they haven’t. Cole resurfaces and discovers that he’s in 2017 and the virus had been released. The episode ends with him looking at the countryside where bodies are being dumped inside a mass grave.

Yes this was an intense one guys. So many things happened and so many great points raised that makes you question whether or not Team Splinter truly are the good guys or just kidding themselves. Thus far we’ve only seen them and the scavengers as major camps in the future. To now see that there is a third, albeit cultish entity in Spearhead, which group is really the best one?

The show continues to keep us on our collective toes as more elements are introduced that further complicate both timelines and I love it. The situation between Cole, Cassie, and Aaron has also changed as the latter two believing the time traveler had died and now appear to be “on” again. Ramse’s own world gets turned upside down as he discovers that he’s a father. While Cole has been his primary concern throughout the series, will his loyalties be tested via his new family in Elena and Sam (who are on Team Spearhead)? The writers have even given Whitley another dimension as this must be the nicest he’s been all season long. The most fascinating scenes though were the ones with Jones because she is shown to be just as obsessed as Foster in finding a solution for humanity.

It looks like Project Splinter and Spearhead will be heading towards a violent confrontation next week and poor Cole is still stuck in 2017 Chechnya. I’m both terrified and excited to see episode nine!

@theworkprint
Follow
Previous articlePhotographic Proof that ‘Supergirl’ is Definitely Happening
Next articleCinderella Review: A Dream Is a Movie That Branagh Makes