I want to apologize for missing last week’s episode. I was out of the country on vacation and unable to stream the episode. To start off, I will quickly recap what went down last week.

The losers from the Redemption House are let loose to fight for a spot back in the house. All the Redemption peeps declare their revenge on whoever sent them into The Presidio and all of the peeps who sent them into the Presidio hee and haw about how they don’t want [insert name of person they sent in] back in the house. Truthfully it was mostly Camila and Jemmye doing all of the bitching. Tony pulls out the win against Darrell to earn his second chance in the competition. I am very sad that Darrell has to go home, but on the bright side, he isn’t forced to live in that Redemption House with those clowns anymore! On the girls’ side, Jenna is able to kick Amanda down into the water to secure the female redemption spot.

The fact that EVERYTHING I just described was in the 2-minute long “Previously On” segment shows you how riveting last week’s episode was.

For this week’s challenge, everyone heads to the beach where Prof. TJ gives a history lesson about pirates in Cartagena, Columbia: “Numerous pirate ships have raided Cartagena for Booty.” Short and concise, as all history lessons should be.

Jemmye has some great words of wisdom for us

Jemmye: “I’ve done enough challenges to know that the booty TJ’s talking about is not the type of booty we all want to get.”

My first response to this line was “I wonder how many challenges it took her to realize pirate booty and booty booty were different things.” As I thought about it more though, pirate booty is treasure and that is something everyone wants as well. So no matter what ‘booty’ is referring to, it is the type that everyone on this show wants.

The challenge this week is “Pirate’s Treasure” where the players will have to haul a 100lb treasure chest full of “booty” through 4 obstacles.

Obstacle 1: Pull the chest via a rope 30 yard across the sand
Obstacle 2: Dig a hole under a rod so that the chest and both players can crawl under to the other side.
Obstacle 3: Push the chest across a wooden roof. Basically, the teams have to find the spaces between the planks to put their hands through to push the chest.
Obstacle 4: Get the chest over multiple shoulder height walls Spartan style.

The challenge will consist of two heats. The first team to smash open their chest, and fly the flag inside said chest, from each heat are in the Winners Circle. The two last teams from each heat are automatically sent into The Presidio. The winners from the Redemption House, Tony and Jenna, are given the honors of determining the partner pairing for “Pirate’s Treasure.”

Tony picks Tori for himself, which makes sense because the strongest female in the house, Cara Maria, hates him so he goes for the second strongest. Jenna picks Johnny for herself instead of CT, which I found odd. What was even more bizarre was that Tony pairs up CT and Cara Maria together basically creating the powerhouse couple. 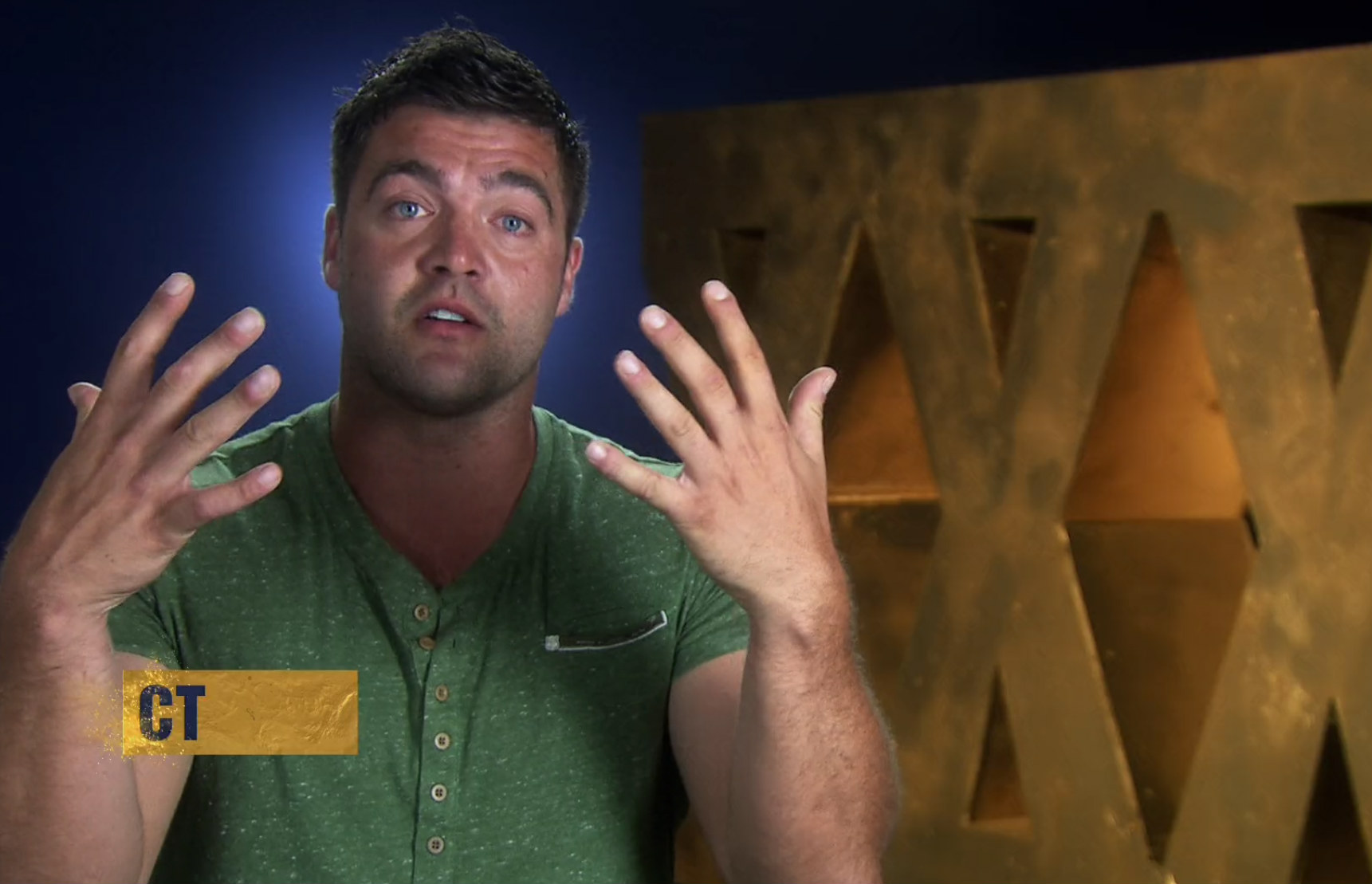 The first heat ends up being stacked with the strongest competitors, including the pairing of Leroy and Camila. Camila is not sure how she feels about having Leroy as a partner

Camila: “All I’ve seen is Leroy acting as a follower. I’ve never seen Leroy act as a leader. With Leroy, I have a feeling that I’m gonna have to take charge. Either Leroy is gonna prove me wrong, or he’ll at least listen to what I have to say.”

First of all, Camila, Leroy has NOTHING to prove to you. Who the hell do you think you are? I am not sure why Camila talking shit about Leroy enraged me, but it did. Additionally portraying Leroy as a follower was a theme that the show tried to push this episode. It was first mentioned at the beginning of the episode when says:

Leroy: “I know how to make it to the end without having to do much. That’s what made me a dirty player by being able to sit behind the vets and anyone else and ride their tail all the way to the end.”

Wait, what? Leroy basically said that the reason he is a dirty player is because he doesn’t play dirty. It would be one thing if Leroy used others to do his bidding and therefore he didn’t get any heat, but he was still manipulating people. I just imagine that in the B/M production office they were like “No one believes that Leroy is dirty. Let’s have Camila bitch about him being a follower post production and Leroy explicitly saying him being a follower makes him dirty and our problem is solved.”

In the end, CT and Cara Maria come out victorious in the first heat, with Tori/Tony and Derrick/Aneesa coming in the bottom.

The second heat was a complete shit show, and it was amazing. First, you have Dario doing all of the work for his team while Nicole is nowhere to be found. The cluster fuck really began though when all six teams arrived at the digging obstacle. 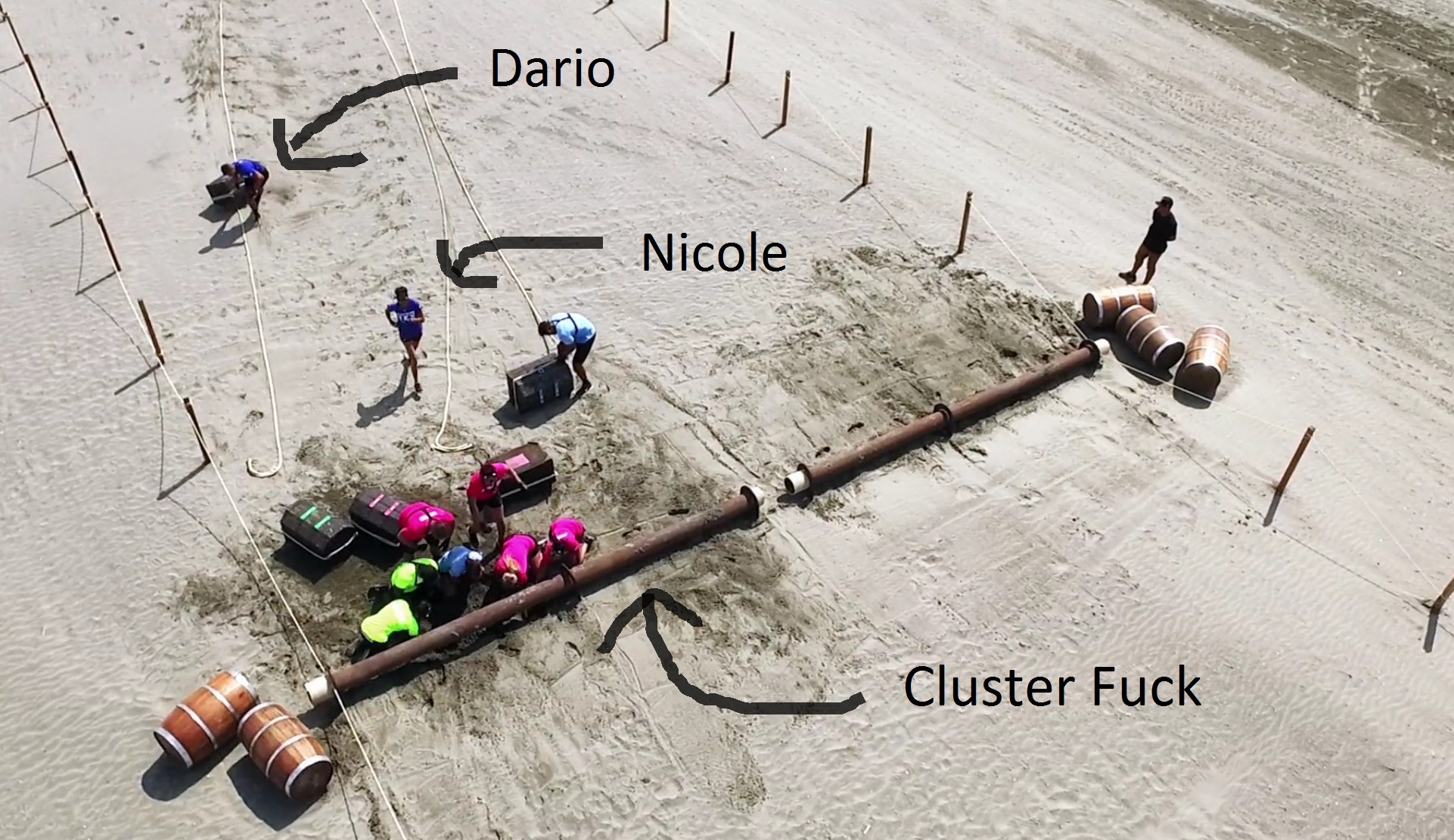 In the first heat, the six teams dispersed with teams pairing up so that three different holes were being dug at once. In the second heat though, all six teams tried to dig one big hole all together, creating a bottleneck to the next obstacle. So basically, if you aren’t one of the first teams through that one hole, you are screwed. Veronica and Nelson are the first team to crawl through the opening and, surprise surprise, they end up winning their heat. The two teams in the bottom for the second heat are Jemmye/Ammo and Tony/Tori.

With the competition out of the way, it is time for the house to let off some steam and get their drank on. The night ends with a freestyle “rap” battle on the bus ride home, which is always a good choice. The activity, which started out light and fun quickly escalated to mean spirited, offensive and personal attacks. After Jemmye throws this riff at Jordan:

Jemmye: “You always act like a bitch, you keep touching Kailah like that you’re gonna get that Cory itch”

Jordan: “Why you coming at me with that base, you got that fucking down syndrome face.”

And with that the whole bus is silent. I think it is important to point out the narrative production wove into the episode regarding Jordan and Jemmye from the start. The episode began trying to paint Jordan as this stubborn man because he is upset about how his castmates keep the house. At first, I found this narrative bizarre because Jordan has valid arguments about how messy the kitchen is. I mean look at this kitchen. 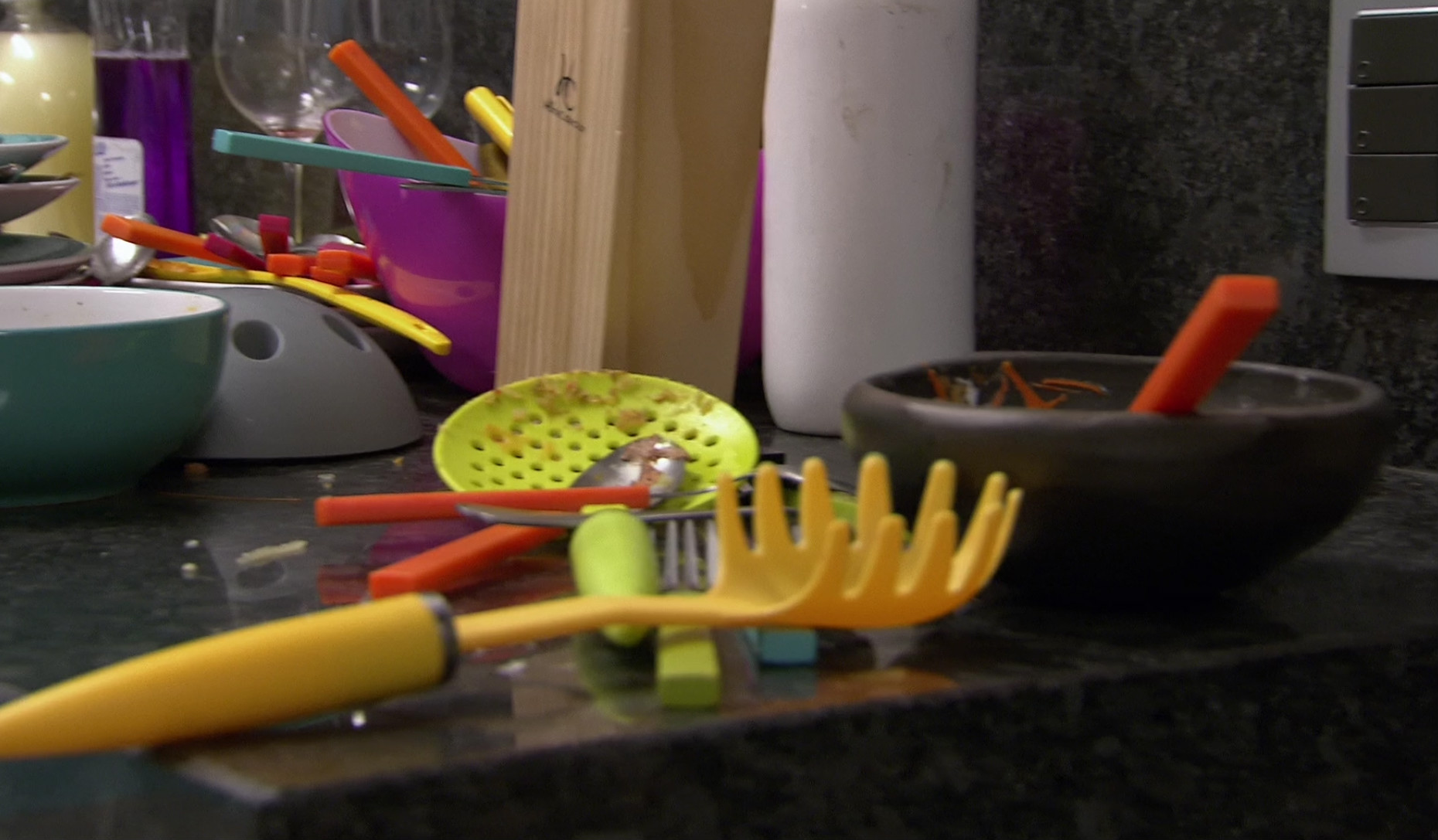 He goes out to the pool and yells at everyone about the statistics of Jelly Jars (more on that in my end section) and cleanliness. Production juxtaposes this with interviews of the females calling Jordan a jerk. It was obvious the show was trying to set him up as this episode’s bad guy. This is not meant in any way to defend what Jordan said, but I found it an interesting way for the show to set up the narrative.

The episode also set up a distinct narrative for Jemmye, as she opens up to Cory about her break from the Challenge following Knight’s death. Jemmye, as recently as last week, was portrayed in a negative light, with her sending in Jenna etc. It felt like they decided to put in her opening up about Knight at the top of this episode to make sure that the viewers would feel sympathy for Jemmye. I am not saying that either of these narratives had any bearing on the hurtful and unacceptable things Jordan said, it is interesting to think that production thought they would.

After the incident, instead of going to sleep, Jordan tries to apologize to Jemmye but instead makes everything worse. In doing so he “pushed” (aka slightly nudged) Aneesa and everything went downhill from there. I was happy to see everyone strongly condemn Jordan for both his insensitive comments about Jemmye’s appearance and using Downs as an insult. I just wish the cast would show as much outrage when other offensive and degrading comments are thrown around the house.

The next day, before the voting starts, Jordan gives what I believe is a heartfelt apology to Jemmye. Even with that apology, the Winner’s circle decides that Jordan has to face the consequences of his actions, and they send him into the Presidio alongside Marie for throwing Jenna under the bus. It was a pretty uneventful deliberation, besides a small disagreement between Veronica and Cara Maria.

At the drawings, Pirate’s Treasure teammates Derrick and Aneesa draw the Double Cross and send in Ammo and Tori, respectively.

I didn’t catch the name of the elimination challenge, so I will call it “Patch Grabber.” Each competitor is wearing coveralls that have 5 patches on it. The goal is to be the first to remove all five patches from your opponents outfit while blindfolded. 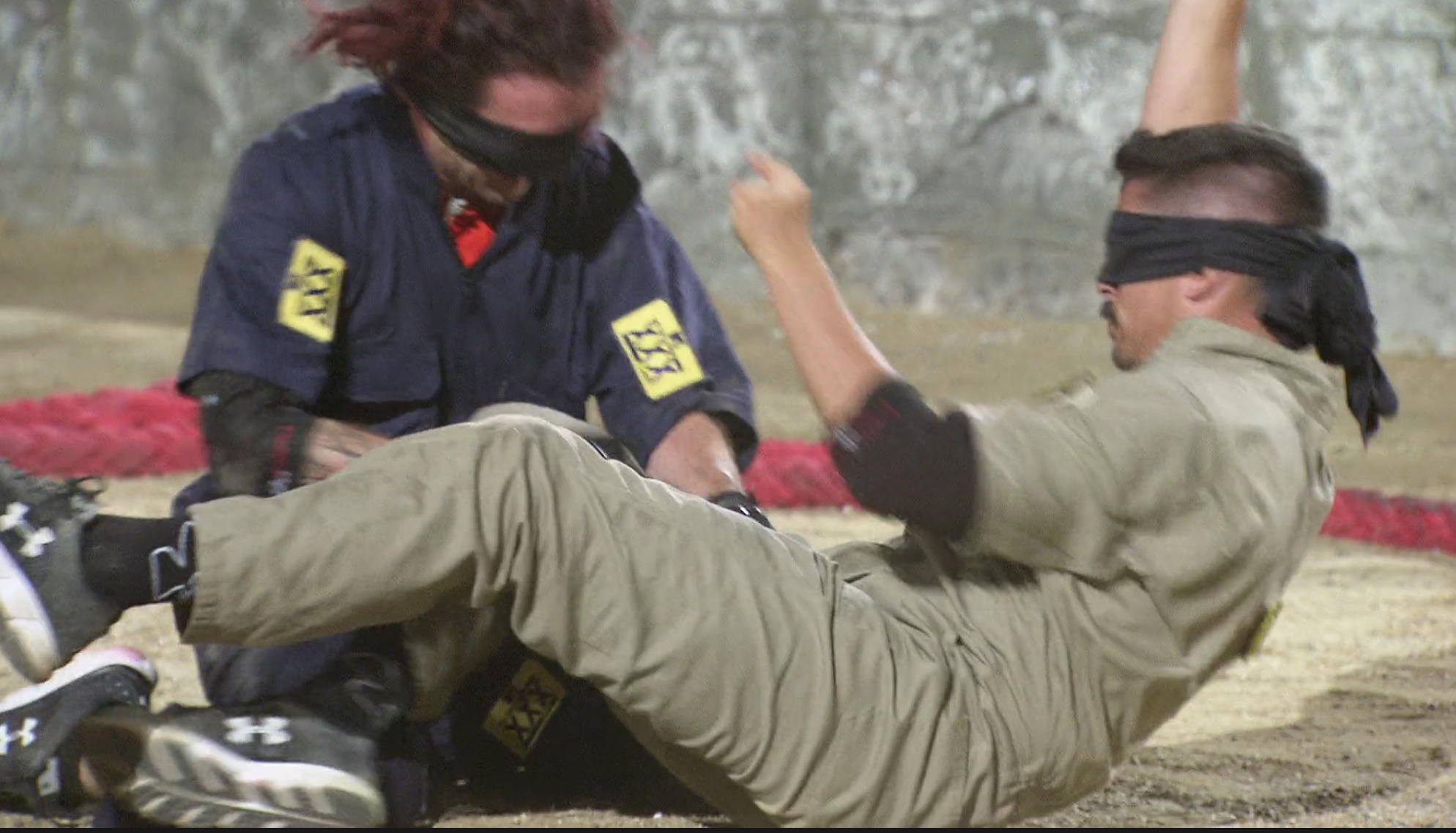 The boys are the first to compete, and Ammo comes out of the gate strong giving himself a 3 to 1 lead. Slowly though Jordan starts to gain ground and ends defeating Ammo for the win. Shortly after the competition ends though, Ammo starts to have a panic attack triggered. Ammo discusses here how the elimination challenge triggered an intense episode of PTSD. I urge you all to read it. I want to wait to see how this is portrayed in next week’s episode before I discuss this, so there will be more on this next week.

Next Week on The Challenge

I usually don’t discuss clips from “Next on” segment but I cannot keep quiet on this one. ANEESA AND VERONICA MAY POSSIBLY HOOKUP. Guys if this happens my head with explode with happiness. I have stated previously while watching The Challenge in high school had a huge crush on Veronica, so this is like the best thing ever. TV gods, please, don’t be queer baiting me on this!