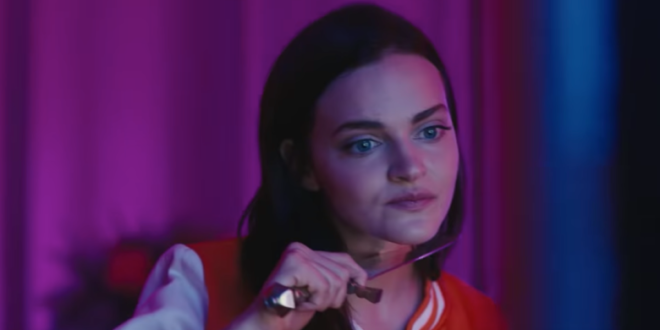 ‘Cam’ Review: How far is Enough?

From the producers behind Get Out comes a horror story about an internet ‘Cam Girl’, her hustle to break into the upper rankings of her industry, and a mystery behind her stolen identity.

Madeline Brewer (The Handmaid’s Tale, Orange is The New Black) stars as Alice/Lola, a young girl secretly working as an internet cam girl – though of her own volition – as she likes both the money and the attention.

She seeks to break into the top rank on freegirls.live – sometimes by pulling unconventional stunts via creative means (think practical effects). Her most compelling acts, involving snuff simulations taken to suicidal extremes.

You see, Alice is an artist at what she does. Making a living through tips for her performances and private chats with clients. She keeps her public life separate from her secret identity –utilizing a strict set of rules: hosting no in-person interactions and making no public appearances as her online personality.

Everything always kept in-house and in her private chambers…

Written by Isa Mazzei, who was a former cam girl herself, ‘Cam’ is different in that it doesn’t shame sex workers – but rather, showcases the lives of both those who work in the industry and its user base.

– Isa Mazzei, in an interview with PAPER.

Mazzei provides a rare behind the camera look of the industry. Showcasing a competition of how far a girl will go for likes, clicks, and rankings. Simply put, ‘Cam Girl’ work is the selling of an illusion that feeds into a person’s kinks or fantasies. A world where co-workers are often in competition and friends are often paid, subscribers. It’s the cattiness of its performers, but also the flaws of its users: desperate men with false entitlements through digital identities.

Cam Girl work is the commodification of an internet persona. Though one that’s not necessarily a sexual one, as this movie showcases quite clearly.

What’s fascinating is that the emphasis in the movie is not in condemnation, but humanization.

There is this strange similarity between the artist and the user, as both seek to be enough to capture other’s attention – lacking a sort of affection of sorts. Yet, both also leading these alternative lives. Ones that they would prefer to keep separate from their principal ones.

The villain of the story is thus two-fold: the thief/monster/doppelganger that has hijacked Lola, in essence, Allice’s other self; but also, there’s this villain in the desire for notoriety, artistic integrity, and fame that comes in being the best. Isa Mazzei, mentioning that the movies Black Swan and Whiplash inspired the story’s creation and theme. Which is troubling because of that ending… well, you’ll see.

The story is a social commentary on fake-online personas. Themes reminiscent of last year’s ‘Ingred Goes West’, though with a stronger horror element. You can also see traces of David Cronenberg in the script, as it’s technically a body dysmorphia story, though it’s shown through the loss of a physical identity – as lola is digital in context.

It’s an oddly beautiful movie. With much credit to Madeline Brewer, playing both hero and villain of the story. She did such a wonderful job that even Steven King gave her kudos for her performance.

You can watch Cam streaming on Netflix.

Christian Angeles is a screenwriter who likes sharing stories and getting to meet people. He also listens to words on the page via audible and tries to write in ways that make people feel things. All on a laptop. Sometimes from an app on his phone.
@Xn_Angeles
Previous Supertrash: “Call to Action”/ “Taguma Attacks!!!”
Next ‘The Christmas Chronicles’ Review