Brooklyn Nine-Nine returns this week with our favorite precinct under the command of none other than the Vulture (Dean Winters). While the detectives bristle under the Vulture’s tyrannical and incompetent rule, Captain Holt spirals deeper into depression after a visit to the Nine-Nine reminds him of everything he’s lost. Although the late Captain Dozerman barely lasted a single episode, it seems like the Vulture might stick around a while. For those who want to see Holt back in command of the Nine-Nine, there’s no light at the end of the tunnel just yet, but “The Funeral” offers up some great jokes and highlights the friendships that make the show so great.

Jake fails almost immediately in his attempt to ingratiate himself to the Vulture (“I knew that you were faking it! I bet you don’t even like nip-slips!”), and the Vulture demands that he end his relationship with Amy or get demoted. They spend the episode searching for a way out of their predicament, which is the main focus and source of hijinks for the episode. However, it’s Captain Holt’s subplot that really shines in “The Funeral”–Andre Braugher once again steals the show as a drunk, depressed, and defeated Raymond Holt. He lost his precinct, but the totality of his defeat didn’t sink in until he saw the Nine-Nine under the command of the Vulture. It might be the lowest point for Holt yet, but it might be some of Braugher’s finest work on the show. Somehow, filtering everything through Raymond Holt’s stoic personality is a joke that hasn’t gotten old yet, and Braugher’s ability to squeeze so much nuance from his deadpan delivery is truly remarkable. Ultimately, it’s Terry’s support and Jake’s persistence that inspire Holt to use what little leverage he can to save the day, getting the Vulture to back and allow Jake to keep his job. 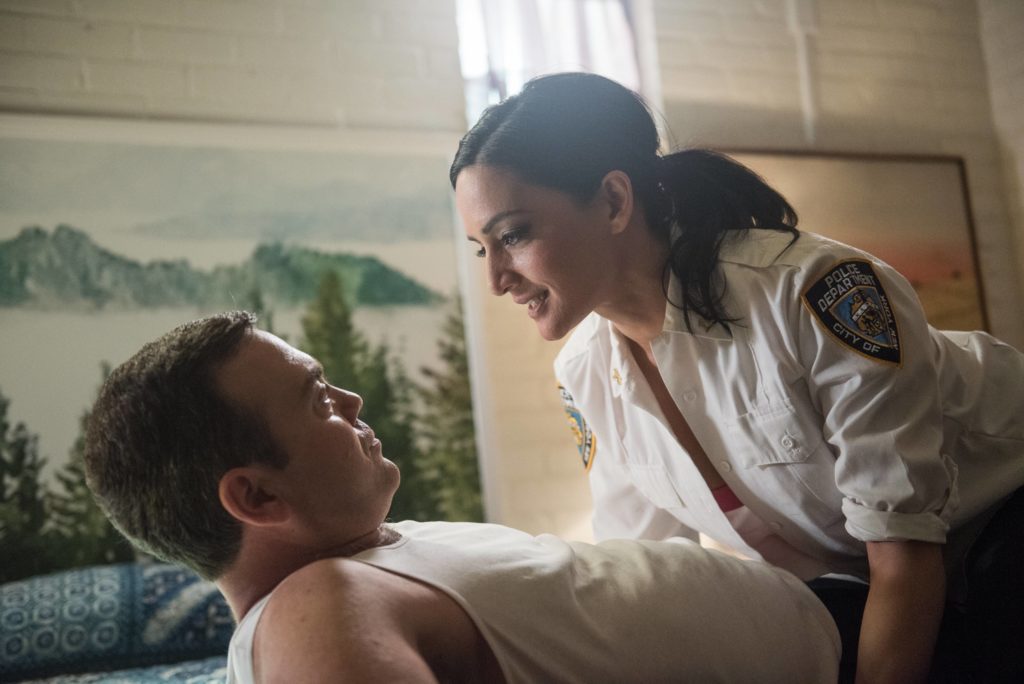 Boyle had a bit of a strange subplot as well: as it turns out, he’s been having casual hook ups with another officer at the recent funerals. Rosa and Gina are of course disgusted, but also surprised that he would be so comfortable with anonymous sex. Their skepticism gets the better of Boyle, who can’t help but start asking questions. He’s heartbroken to discover that the woman he’s been hooking up with is a gluten-free vegan (evidently, a deal breaker), but Gina and Rosa are there to cheer him up. It’s one of the weaker subplots we’ve seen from this show, but it’s a nice showcase for Gina and Rosa, who don’t share enough screen time together. Given Boyle’s infatuation with Rosa in season one and his fling with Gina in season two, it’s also nice for the show to show a typical, supportive friendship without feeling obligated to dredge up old history. There aren’t many shows where the characters are merely capable of moving on.

It’s great to have Dean Winters back as the Vulture, a more aggressive and obnoxious version of his 30 Rock role as Dennis “The Beeper King” Duffy. He’s great at it, and I wish he played some version of this character in every show. Having him be a lasting presence on the show as the Nine-Nine’s newest commander is an interesting choice however–his abrasive nature was always best in smaller doses, so I can’t imagine him staying for very long. How many more commanders will the show churn through, and will Captain Holt ever make it back to his beloved Nine-Nine?

Previous article
Ranking the Best of Bond: The Bond Girls
Next article
‘The Last Man on Earth’ Review: “The Boo”