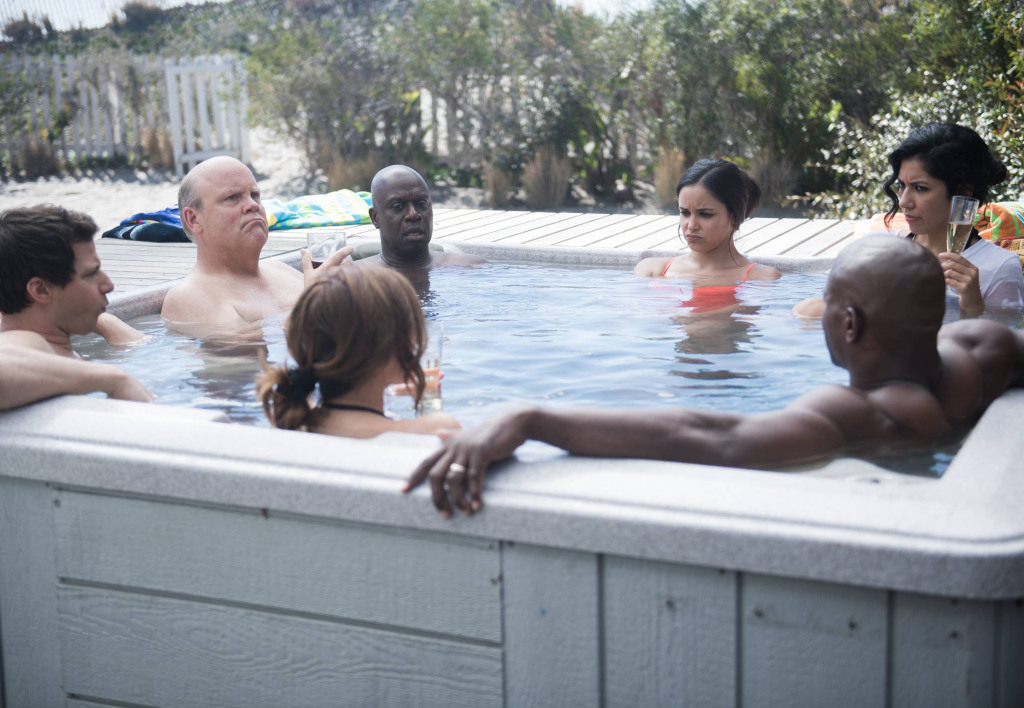 Brooklyn Nine-Nine returns from its mid-season hiatus this week with a detectives-only-getaway at the beach house Charles shares with his ex wife. However, Jake ruins the fun by inviting Captain Holt, who expressed regret over not having had the opportunity to enjoy the same camaraderie when he was a detective. Meanwhile, Charles helps Rosa with texting her new boyfriend and Gina tries to get Amy drunk for her own amusement.

The vacation or company retreat is a common storyline for many workplace comedies; it offers a chance to see the characters in a new environment and without the constraints and expectations of the job. The premise doesn’t work particularly well in this case, however–with the notable exception of “Vacation Terry” (the fanny runs deep), the group dynamics don’t change that much from their behavior in the precinct or at the bar. The addition of Captain Holt to the detectives-only getaway only draws more attention to the issue, as the characters spend the episode squirming in the awkward presence of their boss. Of course, the episode is still enjoyable–it just feels like it could’ve taken place anywhere (it helps that Boyle only has the beach house between the months of December and February, so they’re mostly stuck indoors).

The running gag of Holt being a monotonous robot has yet to grow stale; this episode was full of great moments for him. It’s a testament to the writing and Andre Braugher’s performance in particular that such a wide range of the Captain’s emotions can be conveyed with such deadpan (“He looks like a sad block of granite…”). It’s a delight watching him maintain a straight face as he powers through some of his character’s more ridiculous moments, such as requesting that the bubble jets in the hot tub be turned off because he can’t hear anyone. Meanwhile, Gina spends her time getting Amy drunk, in hopes of seeing the much anticipated (at least for her) “Six Drink Amy”. With each drink she has, Amy inhabits a different personality, which are in order: spacey, loud, dancing, pervert, and weirdly confident. The pairing of Gina and Amy works well, and though the phases of drunkenness provide Melissa Fumero with a bit of variety for her character, the storyline doesn’t quite pan out as well as it could have. The storyline doesn’t receive that much time to work with, and the resolution lands a little flat: Six Drink Amy turns out to be sad and alone, and Gina takes care of her when she inevitably gets sick.

On the other hand, the Charles and Rosa storyline makes great use of its limited time. Rosa needs help sending romantic texts to her new boyfriend, which Charles is more than willing to provide. With such a diverse range of personalities on this show, one doesn’t have to wait too long to find a character out of his or her element, but the tough and stoic Rosa has largely avoided having her “fish out of water” storyline until now. She also pairs well with Charles, who can be something of a sad sack and punching bag on the show, so it’s always nice when he can manage something resembling a victory. He succeeds admirably in helping her, and manages to slip in another classic line: “Texting–that’s the most intimate thing you can do to a lover with your fingers, other than washing their hair.”

Captain Holt’s feelings are hurt after inevitably discovering that his squad has been avoiding him by holding a second party in the basement. Peralta has quick heart-to-heart with Holt in the jetless hot tub (“I’m not a child–I don’t need a bubble bath.”), and devises a solution: a party game where they guess whether statements Jake reads are made up or real sentences uttered by Captain Holt. Holt gets his camaraderie, the squad gets their fun, and we get more Captain Holt-isms. Everyone wins.

@theworkprint
Follow
Previous articleSmall Game Saturday: To the Moon
Next articleTake Off With Snoopy In The New ‘Peanuts’ Trailer