The first thing you’ll notice about Brand New Cherry Flavor is the kittens. There are few things more gag-inducing than watching a cat spitting up a hairball. So, visually seeing a human go through the same process, but in lieu of a hairball, spit up a newborn kitten fetus in a repulsive vomit birth? It’s honestly the high bar of disgusting horror this series executes on a regular basis.

For eight episodes, Brand New Cherry Flavor is shot like a grindhouse movie in that the budget — much like SYFY’s Channel Zero, showrunner Nick Antonsa’s first major horror project —  is low and so the utilization of practical effects is rather high. With clever puppeteering, lighting usage, and set design, this gross-out terror story is actually a creatively cost-effective approach that gives this series much of its indie appeal.

Netflix itself was originally home to numerous indie darlings circa the early 2010s. Before the juggernauts of its original content of movies and shows such as Stranger Things made it the world’s biggest movie and television show powerhouse. The substance in Brand New Cherry Flavor is intentionally lowbrow. More something like Hemlock Grove, another Netflix original horror story, though minus the former’s slightly more convoluted plotlines.

The byproduct of this indie horror approach is a psychedelic acid trip through the exploitative and abusive world that is Los Angeles circa the 1990s. Brand New Cherry Flavor is all about pushing that edge of sensationalism. Using loads of body horror imagery, metaphors about female vulnerability and sexuality, and at times: empowerment; along with a lot of strange turns and turns in this surrealist homage to the David’s Lynch and Cronenberg.

There is a lot of murder in Brand New Cherry Flavor. A lot of revenge and substance abuse while riding fast and hard down the Hollywood streets of  L.A. The blood, sex, and mindless zombies magics featured in the series are but a metaphor, of an already desensitized and abusive system of the 1990’s city of dreams.

Much of the series and the grit of this show follows the stylings of author Todd Grimson himself, an author, who often writes about a degenerate Los Angeles, and whose novel inspired the foundations of this show. Prior to writing Brand New Cherry Flavor, Grimson was a late-shift ER worker who’d seen some of the worst cases humanity had to offer. That was until Grimson himself was diagnosed with multiple sclerosis, a neurodegenerative disease that had forced him to become both housebound and incapacitated. An outlet turned into a novelization, Brand New Cherry Flavor was the creative result of his suddenly homebound and surrealist dreams. 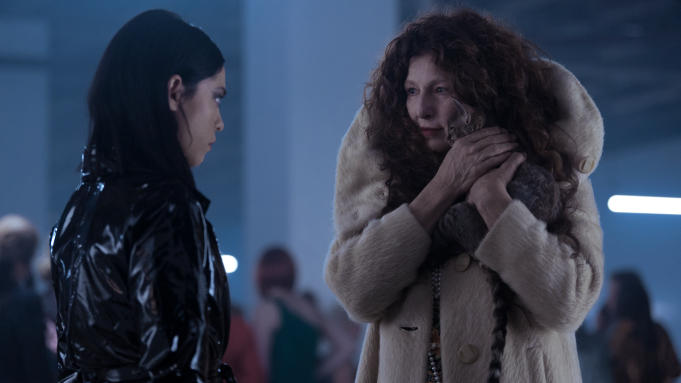 In Brand New Cherry Flavor, Brazilian indie director Lisa Nova (Roza Salazar) moves to Hollywood for fame and fortune, hoping to produce and direct her controversial short film into a feature debut. Struggling through rejection, a chance encounter with producer Lou Burke (Eric Lange) becomes Lisa’s saving grace. As the washed-up but formerly famous director promises to help her make it big by mentoring her… at least until it turns predatory. Frustrated by Lisa’s rejection of his advances, Lou backstabs his would-be protege, by stealing the one thing that matters most to Lisa Nova: her movie.

A tale of twisted revenge, Lisa then encounters a witch named Boro (Catherine Keener) who is willing to curse Lou, in exchange, for some magical kitten babies born out of Lisa’s past;  in a quite literal symbol of birth, trauma, and motherhood and a none-the-less disgusting prize for Boro to collect. Though the plot is semi-transparent in its direction (it’s a revenge story after all), it’s also very shocking, and at times, grotesque. All for a dreamy depiction of the Hollywood nightmare.

Now, there’s a lot of decent talent to be praised about this show. Manny Jacinto does a really great job fitting into the role of a stoner drug dealer named Code. An out of his depth though blindly in love role, befitting for The Good Place’s Jason Mendoza. Catherine Keener likewise, feels fit in the role of Boro in that she presents the character with a calm suave of a witch-woman who’s always in control, yet nevertheless, very subtly funny. Though easily the best performance was by Rosa Salazar, as the Alita Battle Angel lead really goes out there to sell the series. Both in her portrayal as the naive and innocent young Hollywood director being exploited, while also, showcasing a very dark past. Because like any good horror, this protagonist has some seriously eye-popping horrifying demons — and Salazar does a great job of opening the cellar door to them.

That said, Lisa and Boro represent a lot of the female empowerment angle of a woman seeking revenge and another willing to provide it. With hand-over-fist, the vagina scene being the most controversial moment featured within the series. It’s the women seeking to take back control — by flipping the narrative and utilizing witchcraft and voodoo zombism — that sell the plot of the story as a tale of revenge in a bizarrely grotesque way.

Brand New Cherry Flavor is a show about offending sensibilities with an awful lot of metaphors about kittens and rebirth. The surrealism is most definitely meant to evoke Cronenberg and Lynch’s body horror vibes. Though the story can be slightly convoluted by its ending. Still, there’s enough here to entertain any grotesque horror fans — I just suggest not eating anything while watching.

@theworkprint
Follow
Previous articleThe Suicide Squad Review – Fun In A Splooging All Over Us Kind Of Way…
Next articleWhat We Do In The Shadows Recap: The Prisoner