At BookCon 2019, author Joe Hill and executive producer Jami O’Brien were on hand to promote NOS4A2, a new show on AMC based on Hill’s bestselling book of the same name. The story follows two characters, Vic McQueen (Ashleigh Cummings), a young woman with the supernatural ability to find lost objects and Charlie Manx (Zachary Quinto), an immortal creature who feeds off the souls of children. This is definitely a different type of vampire story.

Attendees were treated to a few scenes and the first five minutes of the pilot episode. From the footage shown, NOS4A2 undeniably has an air of creepiness as we see children become monsters as a result of Manx draining their life force through his 1938 Rolls Royce Wraith. On the panel, Hill discussed how he knew O’Brien was the right person to bring his novel to the screen back in 2017 when AMC was developing the show. He was shown a script penned by her and it displayed so much depth that he was instantly seized. Hill believed that O’Brien was someone who understood how to swiftly, efficiently and empathically draw a character. From that moment on he felt that the show was in really safe hands.

O’Brien also talked about the early discussions they had on adapting the book. She remembered clearly Hill telling her then that there was nothing scarier than a candy cane in July. The executive producer held on to that as a way to frame the horror in the story and was an important touch stone in the writer’s room.

Hill admitted that quote was actually ripped from a Lon Chaney’s saying that there was nothing funny about a clown at midnight. He goes on add that a lot of good horror is a juxtaposition where you take something we find comforting and heart-warming and then ripping the rug from under it to make it seem eerie and unsettling. 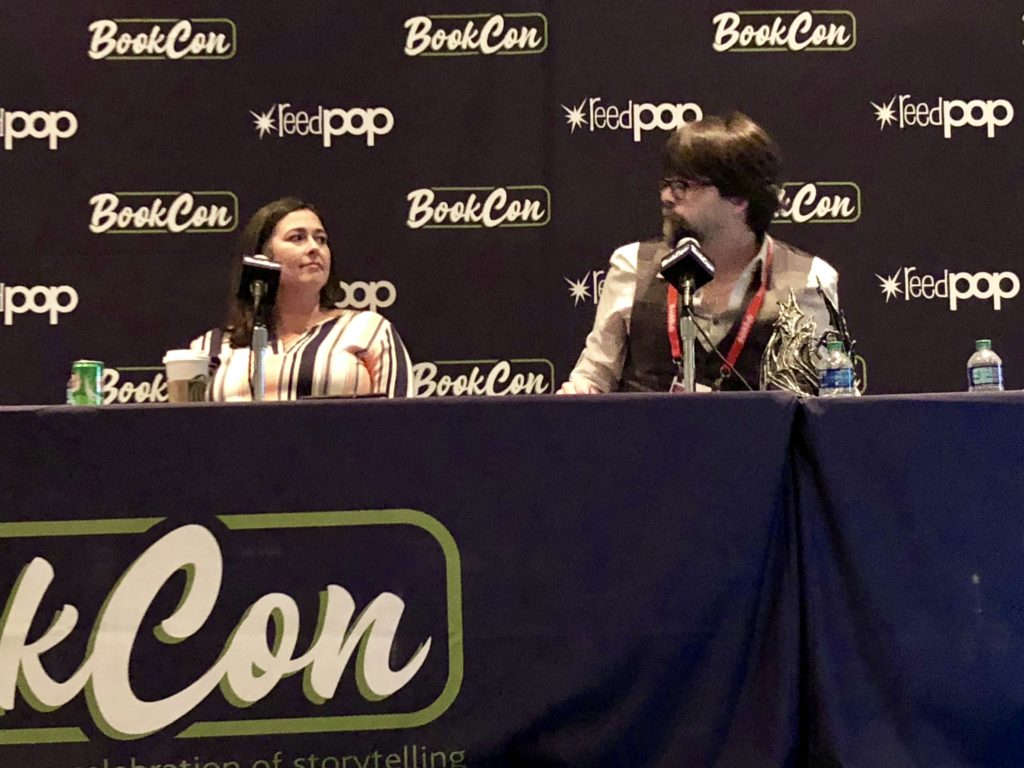 “Everyone loves Christmas music in December, you know when it comes on the radio you start thinking about the tree and presents and good times with family. But if you’re out in the woods in the middle of summer and are on a hike and are a little bit lost then you come across a derelict shack and the windows are all boarded up and there’s flies buzzing around the place and you hear watery Christmas music coming from inside, you’re gonna turn around and walk the other way,” he said.

The panel also talked about a big difference in the adaptation. The novel it spans decades of Vic’s life, while the television series focuses on just one decade. The portion of the book that covers Vic’s childhood O’Brien loves because it sets up her environment, her family, her powers, and it’s when she first encounters Charlie Manx. She didn’t want to lose that section nor did she want to play it as a flashback with a child actor. It was important for the show to have the same actor play the character through that period and so they aged Vic up to eighteen when she sees the Shorter Way bridge for the first time. The bridge is the mechanism by which the protagonist is able to find lost things, she asks a question and it takes her to the answer on the other side.

Both Vic and Charlie Manx share similarities as they are able to take objects or places from their imagination into the real world. The two also came from traumatic family backgrounds, but the difference between them is that Vic is empathetic and compassionate. She is able to forgive while Manx is not. Interestingly enough as well, Hill comments how Charlie doesn’t view himself as antagonist because from his perspective he’s saving children from abusive, neglectful homes. When he’s done with them he takes them on a trip to Christmasland where the kids are now the monsters and no one can ever hurt them again. They will never know sorrow, regret, or unhappiness.

“You can give the story just the tiniest little twist and he seems to be the hero. Part of the problem though is that Charlie has a very loose definition of abuse. When Charlie looks at mothers there’s almost no mother by his definition that wouldn’t be abusive, neglectful, horrible. Even the act that is required to make a child immediately disqualifies a woman from being viewed as a decent person.”

O’Brien says that Quinto was very interested in the idea of Manx as the hero and exploring that. He was invested in the character’s mission framed in a positive light and on his backstory that is explored a bit in season one.

NOS4A2 is certainly a twist on the vampire story and looks to be a promising tale of good versus evil in set in a world that we know yet slightly skewed.

It airs Sunday nights at 10/9 central on AMC.