Since the arrival of the WiiU, one of it’s biggest selling points for the console has been its unique social media destination, Miiverse. It allowed all Nintendo gamers on WiiU, and later PC and 3DS, to share screen shots, make beautiful gaming artwork, and have topical discussions on their favorite Nintendo games.

Miiverse has gone through minor changes since launch, but nothing as major as what’s happened today. Today, Nintendo has completely overhauled Miiverse. Gone are the days of getting lost in a stream of unrelated posts. Nintendo has pulled back the curtain to a new Miiverse, a Miiverse of organization. (*Editor’s Note: Sounds like a super villain planning his takeover of a city) Miiverse has now been split into categories: Journal Entries, Recent Drawings, Discussions and Screenshots.

The Journal feature allows you to track your progress on games as you play them. Now when playing a game, if you open Miiverse , you will automatically take a screenshot to show what was happening in the game at that moment in time (unless the game doesn’t support screenshots). The new Journal actually replaces posting to your activity feed, so that feature is no longer available. 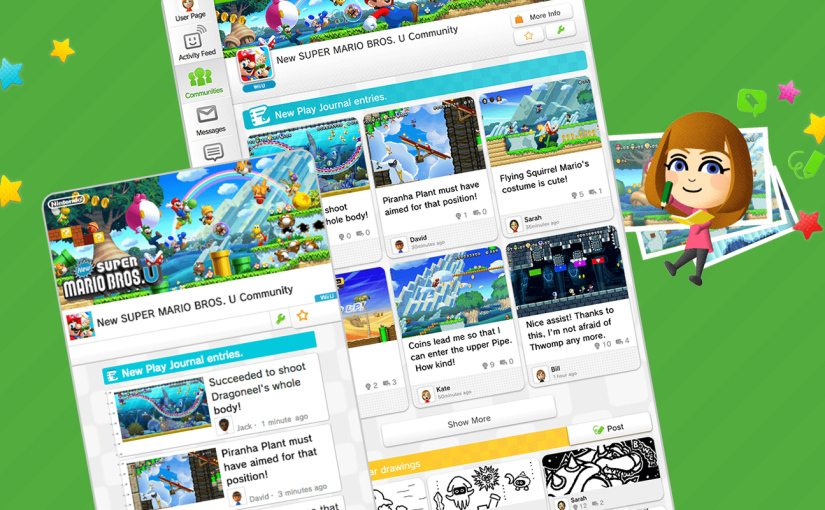 The other sections in Miiverse are somewhat self-explanatory: recent drawings, discussions, and screenshots. It is definitely nice that all posts are properly sorted. While it seems like a minor change, it should greatly help with the clutter that has taken over Miiverse.

The final change to Miiverse is the increase of posts in a given amount of time. You can now post a combined total of 30 posts or comments a day, not including in-game posts. This was very high on the user complaint list, so its nice to see it resolved.

Do you like the new changes made to Miiverse? Or do you fear change? (*Editor’s Note: Again, I’m getting a super villain vibe. We seriously need to have a discussion with James) Let us know in the comments down below!